Introduced by her friends as “the ocean person,” Katherine Ball has spent much of her life near the water. When she was 10 years old, her grandmother gave her “Tracking Trash: Flotsam, Jetsam, and the Science of Ocean Motion,” a book about oceanographer Curtis Ebbesmeyer and his marine debris study. It was then that Ball knew she wanted a career related to ocean studies.

“I get so excited about the ocean,” said Ball, a Human and Social Dimensions of Science and Technology PhD student at Arizona State University's School for the Future of Innovation in Society. “Everyone knows that if they can't think of a present to buy me, find something cool and ocean-related. My favorite animals are squids and octopuses.” Ball’s passion for the ocean is now taking her to Washington, D.C. She has been named a finalist for the 2021 class of the Sea Grant John A. Knauss Marine Policy Fellowship program.

The fellowship places graduate students in federal government offices in Washington, where they will learn about and help shape national policy decisions affecting ocean, coastal and Great Lakes resources. The fellowship is sponsored by the National Oceanic and Atmospheric Administration’s (NOAA) National Sea Grant College Program, which works to create a healthy coastal environment and economy, and bring science and communities together to conserve coastal resources.

“I’m looking forward to networking and learning more about how the government works and operates,” Ball said. “I want to pursue a government position after I earn my doctorate, so this allows me to test the waters.”

Working in policy wasn’t always Ball’s goal. When she started her bachelor’s degree in oceanography, she intended to study marine debris and plastics. But she didn’t want a career that would have her sitting behind a computer all day. She wanted to be more involved in conducting research and getting communities engaged, so she steered her studies to policy.

“I started getting into citizen science,” Ball said. “How do we engage people with scientific issues through the use of technology, participation and research? How can communities make changes at the local scale? How can people concerned about their beaches get their local government to pass policy that helps them?”

For someone interested in ocean studies, Arizona may seem like an unusual choice. But when Ball participated in the ASU Citizen Science Maker Summit in 2016, she knew that ASU was where she wanted to study policy further.

“I was drawn to the (school's) attitude toward communities,” Ball said. “Communities are valuable; we need their input.”

Her research has focused on community empowerment. During her undergrad, she designed a prototype sensor that members of the public could use to study microplastics in the ocean. And for her master’s thesis, she developed a board game to educate people about helium. Both projects are still being used and impacting communities.

Ball is currently working as a graduate research associate and also developing her second-year research project. She is looking at how federal agencies perceive, value and govern Alaska’s oceans and whether there is a disconnect between agencies based in Washington, D.C., and their regional offices in Alaska.

“Someone from Washington, D.C., who has never been to Alaska, will most likely understand the relationship between place and native cultures differently than someone who lives there and knows the place personally.”

Ball wants to improve public participation in marine policy and find ways for communities to be better engaged with government.

“I want to interact with people and understand how projects will impact them. I want to bring their voices into decision making.”

Ball will learn her placement for the Knauss fellowship this October, and her fellowship will begin in February.

Ryan Gleason was 10 years old when he solidified his love for maps. As a fourth-grader in Ames, Iowa, Gleason pored over worksheets and textbooks and won his school’s geography bee, beating kids two grades his senior. For his efforts, he won a National Geographic board game. “I think at that point it really reinforced my love for geography and maps,” Gleason remembered on a recent call fro...

Ryan Gleason was 10 years old when he solidified his love for maps.

As a fourth-grader in Ames, Iowa, Gleason pored over worksheets and textbooks and won his school’s geography bee, beating kids two grades his senior. For his efforts, he won a National Geographic board game. 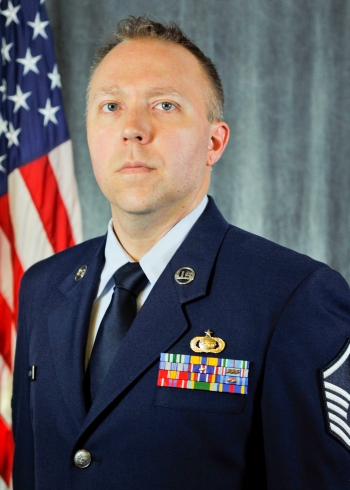 “I think at that point it really reinforced my love for geography and maps,” Gleason remembered on a recent call from his home in Rockville, Maryland. “When I realized that I really needed to buckle down and choose a major, I found the whole world of geographic information systems. I didn’t realize I could have a career in something I really enjoyed.”

Now 38, Gleason — a husband, a father of three and an active-duty U.S. Air Force airman — is one of nearly 100 students who earned their bachelor’s degree this past May from Arizona State University's School of Geographical Sciences and Urban Planning through ASU Online.

But every student’s journey toward graduation is uniquely theirs. For Master Sgt. Gleason, earning his diploma was the conclusion of a two-decade-long collegiate journey, one characterized by adversity, persistence and the belief in himself that one day he would finish what he started.

In fall 2004, Gleason ran out of options. Four and a half years into college at Iowa State University, he was on academic probation with a GPA of 1.9, had less than two-thirds of the academic credits he needed to graduate, and denied withdrawing additional student loans.

At 22, he dropped out of school, moved into his parents’ basement and got a job delivering pizzas. The consequences of his actions weighed on him.

“I just wasn’t ready,” Gleason recalled. “I didn't make a lot of good choices when I went to Iowa State right after high school. I was failing classes, having to repeat classes, just being generally irresponsible, that really sums up my first attempt at an undergraduate degree.”

The next defining moment in his life came the following spring. Gleason, on a whim, enlisted into the U.S. Air Force. Thrown into a new environment marked by structure, discipline and integrity, he thrived.

“It’s really what turned my life around,” Gleason said. “The Air Force really took me in and made me feel like it was the place to be. I didn't have a whole lot of options, but I saw that they could pay for education and that to me was a way for me to try to redeem myself when and if I decided to go back to school.”

Part of something bigger

As the years passed, Gleason never forgot about college. While completing his duties with the Air Force full time, he continued to take classes, enrolling himself in several online institutions, chipping away at the units and requirements needed to earn his degree. But nothing stuck.

“I took maybe nine credits here and 12 credits there but nothing really stuck and part of it was because I never really felt like I was part of something,” Gleason said. “At those online institutions, as a student, I just felt like I was just another statistic or number.”

ASU’s online degree program opened up new opportunities for Gleason. Initially attracted to ASU for its relationship with active-duty military and veterans through the Pat Tillman Veterans Center, the quality of educational support and the financial assistance he received, Gleason enrolled in the online Bachelor of Science in geographic information science (GIS) degree program at ASU in 2018.

“I chose Arizona State because I really wanted to go to a school where I felt like I was part of a community, part of something bigger,” Gleason said. “Also, the instructors that teach the online programs are the same instructors and faculty that teach on campus and that was a big deal.”

Gleason says it's the relationships with his professors and the quality of the education that made the difference for him and make him proud to be a Sun Devil.

“Having the same resources (online) so that you can have a similar experience as being in-person was awesome. There were really cool online lectures with guest lecturers from other parts of the department that came in. You feel more connected to the program.” As part of his GIS coursework this past spring, Gleason completed an online capstone project in which he mapped and analyzed water quality data in the Chesapeake Bay to address complex environmental issues. As part of the course, Gleason had weekly one-on-one video chat conversations with Drew Trgovac, lecturer in the School of Geographical Sciences and Urban Planning, where he was able to navigate the complexities of the project and get direct feedback from faculty.

“Having those weekly conversations with Dr. Trgovac, having the encouragement from him, his guidance and mentorship throughout the whole process really were invaluable for me,” Gleason said. “That probably is the biggest takeaway from going through this program.”

Trgovac recognizes Gleason's commitment to his studies and his passion for the field of GIS.

“Ryan was always going one more above what you would think of a typical student, he was always willing to go on and tinker ahead,” Trgovac said. “He is really good at problem-solving.”

“It's always easier to do something simpler, but he would challenge himself and problem-solve everything he needed and he’s better for having done that, too, because when you run into some kind of difficulty, well, do you give up or do you keep going?”

Through the challenging times, Gleason says he was inspired by his wife who, following the births and raising of their three children, went back to school to earn her master's degree and her PhD in public health. She now is a postdoctoral researcher for the National Institute of Health.

“Having such drive and dedication in my best friend, my role model, who gave me the incredible motivation and set the example for me, and also she's there to help continue to motivate me every step of the way, having her was key to all of this, and obviously it means a ton to me,” Gleason said.

Following graduation, Gleason looks forward to continuing to dedicate the next four and a half years to his service to the Air Force before retiring from the military. After that, he aspires to take on new challenges and begin a career as a GIS analyst or pursue attaining a master’s degree.

“I'm going to retire when I'm 42 or 43, so I still have a bunch of time ahead of me. I have not completely ruled out a master's program. I really had such a positive experience at Arizona State pursuing my bachelor’s that it left me ready for more again.”

For those on their own journeys who may be down on their luck or doubting themselves, Gleason has one piece of advice: “There is always time.”

“If you tell yourself it's too late, then you'll never achieve anything. You'll never get started. You'll never finish. You can't let yourself get into that mindset and you really just have to continue to look ahead no matter what,” he said.