Keller, who was also the director of the Hispanic Research Center, is remembered for his commitment to underrepresented students, writers and artists

“Gary Keller was a tireless champion of educational access, and a scholar and mentor who dedicated his life to supporting student success," ASU President Michael Crow said. "Through his commitment to Latina/o students and other historically underserved communities, Gary helped lay the groundwork for the ideals later reflected in our ASU charter and the socioeconomic diversity of our student body. We will always be thankful for his advocacy and leadership.” 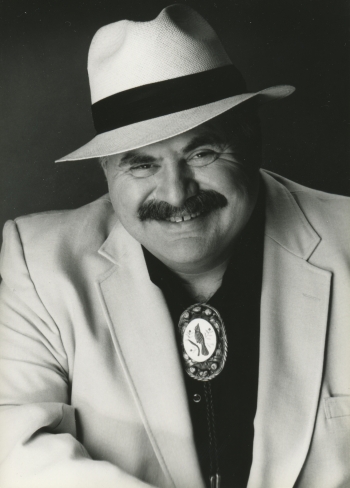 In his 34-year-career at ASU, Keller taught Spanish and Chicano studies, led the Hispanic Research Center and served as founder and editor of ASU’s Bilingual Press. His many roles and projects at the university captured his passion and driving force: to champion minority voices and culture and help students reach their full academic potential.

"Gary was gifted in many different things and at many different levels in an absolutely unique way; he was a singularity,” said Michael Sullivan, a project administrator at the Hispanic Research Center Project who worked with Keller for more than 30 years at two universities. “There’s not many people that I’d pack up my family and move across the country to continue working with.”

“Trying to explain how important Gary has been would be like trying to catch the wind,” said Antonio Garcia, the former associate director of the Hispanic Research Center and a current dean at New Mexico State University. Garcia knew Keller for 30 years. “It is hard to imagine anyone matching his energy and success in so many different areas — a true Renaissance man who made a great impact on the mid- to end of the 20th century and set in motion 21st-century changes to higher education.”

Keller’s work was widely acclaimed. From 2012–16, his academic enrichment projects through the Hispanic Research Center drove unprecedented results: 268 underrepresented minority students graduated with doctoral degrees in STEM fields and doctoral enrollment increased 622%. The following year, Keller received the Dr. Loui Olivas Distinguished Leadership in Higher Education Award; other accolades during his career include the Distinguished Scholar Award from the National Association for Chicana and Chicano Studies, the American Association of Hispanics in Higher Education President’s Award and the Dana Foundation Award for Pioneering Achievements in Education. At the time, the Pioneering Achievements in Education award was the largest annual prize in education in the country and Keller received a $50,000 prize, which he promptly donated back to his minority projects through the ASU Foundation.

He was involved with the More Graduate Education at Mountain States Alliance and the Western Alliance to Expand Student Opportunities. These two initiatives provide underrepresented minority students in STEM fields with funding and mentorship with the goal of increasing the number of these students enrolled in and completing graduate programs.

“Professor Keller embodied the spirit of ASU’s charter to measure success by whom we include and how they succeed decades before the language was adopted at the university,” said Patrick Kenney, dean of The College of Liberal Arts and Sciences. “His scholarly writings and innovative research along with his unwavering support of all undergraduate and graduate students will be greatly missed across the university, his scholarly community throughout the world, and the state of Arizona writ large.”

Brandon Ortega began working at the Hispanic Research Center as an undergraduate student and joined as a media specialist after graduation. He helped elevate Keller’s research through various mediums including video and photos. Ortega recalled Keller’s passion for research and learning.

“He loved education so much, he never stopped being a professor,” he said.

Keller authored or co-authored more than 30 books and produced more than two dozen documentaries. As editor of the Bilingual Press at ASU — the largest Hispanic-focused publisher and distributor in the country — Keller committed to publishing high-quality writing from established and emerging writers in English, Spanish and bilingual format.

In an interview more than a decade ago, Keller’s spirit of dedication to the Hispanic Research Center and the Bilingual Press was well-captured.

“If you go for something and commit to it for decades, then you can accomplish great things. If you do something for three years, even if it’s a great three years, it just vanishes,” he said. “Our philosophy is not that.”

Keller’s vision was to benefit the most people as possible to create a paradigm shift, Sullivan said. To achieve that vision, Keller needed support and his approachable, familiar personality allowed the Hispanic Research Center and its employees to thrive, with many team members having worked together for decades.

“Gary had a gift for personnel, he knew how to hire people who could share the vision, we have almost no turnover in the center. Low turnover tells you something, it tells you that you’re treated like a human being and the job is interesting and inspiring,” he said.

Keller’s impact on The College, ASU and the broader world is significant and will be remembered for years to come.

“There’s impact in his Chicano art books that will be in libraries forever, archival materials of a period no one else could or would do but we did it. There are many other authors that Gary found and published that probably wouldn't have been published otherwise, again living on in libraries and people’s homes,” Sullivan said.

“The biggest legacy is the people, the tens of thousands of students turned professionals. Every one of them is an infection agent, everything they benefited through our programs, they consciously or unconsciously will share with the people around them. This is a virtuous expansion, where each of them in turn helps somebody else. That can’t be taken away and is a lasting impact that will be generational.”

Kimberly Koerth of the School of International Letters and Cultures contributed to this article.

Arizona State University graduate student Swarup Dey has been awarded the 2020 School of Molecular Sciences Innovation Award for his invention, which creates a DNA nanosensor that mimics transmembrane proteins.“Since I began my journey in research, it has always been my dream to work on something that will leave an impact on the world," Dey said.Established in 2019, the School of Molecular Sci...

Arizona State University graduate student Swarup Dey has been awarded the 2020 School of Molecular Sciences Innovation Award for his invention, which creates a DNA nanosensor that mimics transmembrane proteins.

“Since I began my journey in research, it has always been my dream to work on something that will leave an impact on the world," Dey said. 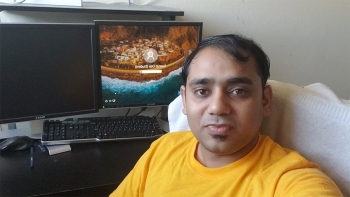 Established in 2019, the School of Molecular Sciences Innovation Award recognizes a graduate student, or student team, for achieving the school's mission of discovering molecular-level solutions to real-world challenges through the pursuit of methodology, or the development of a research idea or invention. The annual award rotates through one of the six primary research areas of the school, and the 2020 research areas were biological molecular science, and disease and diagnosis.

Dey joined the school's PhD Program in fall 2015 after earning a master's degree in chemistry from the Indian Institute of Technology Bombay. His research focuses on “developing a cheaper and faster method for blood test-based cancer detection in the early stage of the disease.” He works under the supervision of professors Hao Yan and Rizal Hariadi.

“The theme of the 2020 SMS Innovation Award resonated with my research theme. I am grateful to be selected for this award,” Dey said.

Professors Hariadi and Yan said: “Swarup has conceived and executed a very innovative and original idea for rapid, cheap, liquid biopsy-based cancer diagnostics. Swarup Dey‘s invention will have a potential impact on helping doctors by providing rapid, ultrasensitive, highly specific and cost-effective diagnosis and prognosis of cancer patients without the need for surgical tissue biopsy.”

Swarup has already been granted a patent for his innovation. He is also preparing a manuscript on the research to be submitted to a primary research journal, and the work will be part of his PhD dissertation.

“I am delighted by the selection of Swarup Dey as the recipient of the 2020 SMS Innovation Award," said Bill Glaunsinger, School of Molecular Sciences emeritus professor, former unit chair and founder of the Innovation Award. "He has created a novel DNA nanosensor that mimics transmembrane proteins. This invention has the potential to provide a minimally invasive method for the early detection of cancer which is rapid, sensitive, specific and cost effective. Hopefully this prestigious award will help encourage Swarup to continue to pursue his invention.” 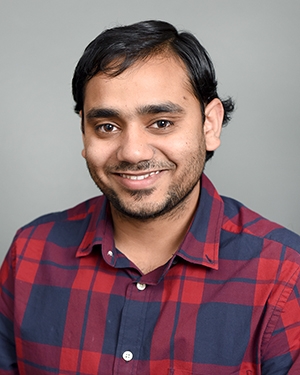 Question: What’s your vision about this innovation project?

Answer: This project has helped to inch a little bit toward changing the world and creating something to make diagnosis easier. I am really grateful to be selected for this award.

Q: How did you process this project?

A: I had this idea since summer of 2016. Initially we worked on it for about a year but it was too difficult and did not work. In the summer of 2019, we changed our design and thought to give it another shot. This time it worked. This has matured me as a researcher to understand the complexity and beauty of biology and never give up.

Q: What’s the next step of your innovation?

A: In the first part of our innovation we were trying to mimic the function of a class of biological protein that plays a crucial role in our body – from visualizing to controlling our blood pressure to let us think. Next, we used this feature to develop a rapid, diagnostic method for detection of cancer in early stages without the need of expensive and painful surgical biopsy processes.

The next step of this research involves optimizing our system for use in a clinical set up so that it can be commercialized. If successfully translated to the market, our innovation has the ability to improve current cancer diagnosis methods by a) reducing cost b) making it less painful — just a simple blood or urine test would be enough c) early stage detection with more time for doctors to save patients.

Being from an economically strained region in India, where health care is not very easily accessible, my dream is to develop a cheap health care solution for people who cannot afford expensive tests.

Q: Which faculty member helped you with your innovation?

A: Being part of Professor Hao Yan’s research group, surrounded by the highly collaborative environment of the Center for Molecular Design and Biomimetics in the Biodesign Institute, has helped me tremendously. Professor Yan always encourages independent thinking and pursuit of passion rather than following a set of standard rules. This has really helped me grow as an independent thinker under his guidance.

I must also mention my other advisers — Dr. Rizal Hariadi and Dr. Yan Liu whose continuous support and ideas have helped me explore various fronts in this project. Dr. Hariadi always strives for work that alleviates real world problems. I consider myself to be lucky to be guided by these seasoned scientists in a world class institute.