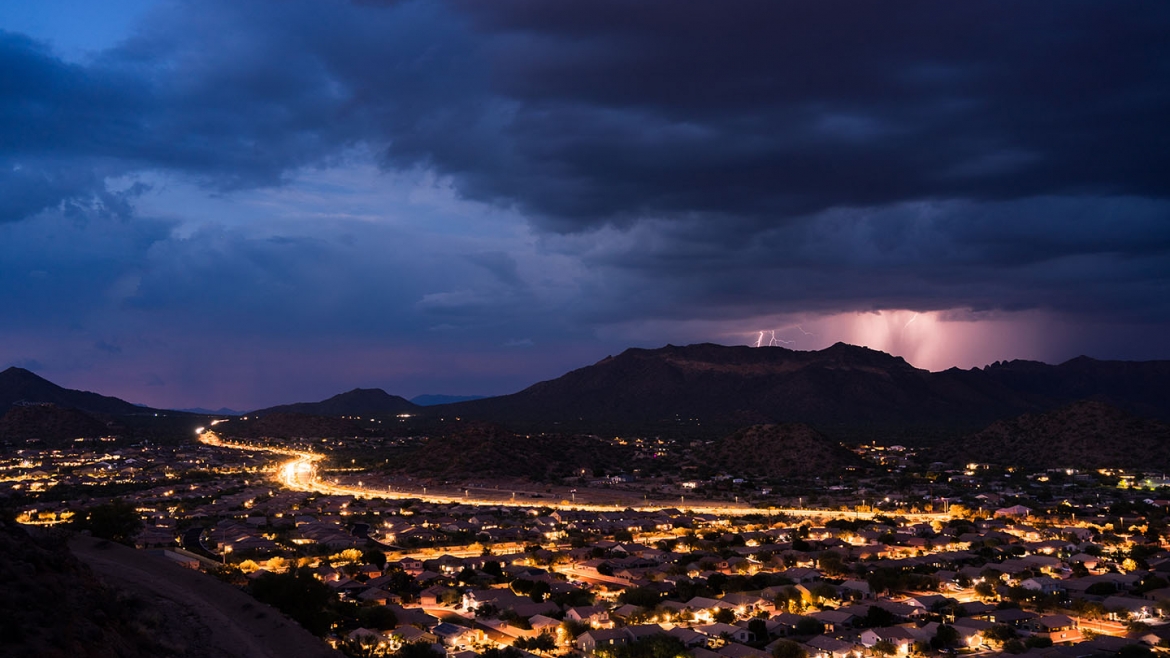 The Emirates Mars Mission, the first interplanetary exploration undertaken by an Arab nation, is expected to lift off in July (exact launch date depends on weather conditions) on an H-IIA rocket from Tanegashima, Japan, and arrive at Mars in February 2021, where it will spend two years orbiting the red planet gathering crucial science data.The mission is being carried out by the Mohammed bin Rashi...

The Emirates Mars Mission, the first interplanetary exploration undertaken by an Arab nation, is expected to lift off in July (exact launch date depends on weather conditions) on an H-IIA rocket from Tanegashima, Japan, and arrive at Mars in February 2021, where it will spend two years orbiting the red planet gathering crucial science data.

The mission is being carried out by the Mohammed bin Rashid Space Centre (MBRSC) in the United Arab Emirates (UAE) in collaboration with a number of research institutions, including Arizona State University. 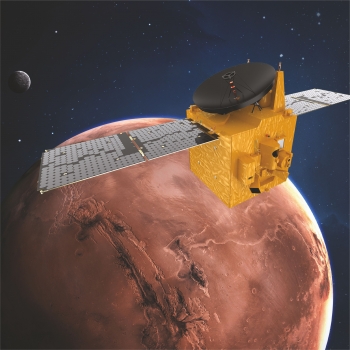 An artist’s impression of the United Arab Emirates’ Hope spacecraft in orbit around Mars, where it will arrive in February 2021 after launching in July from Japan. Credit: MBRSC Download Full Image

The orbiter, named "Hope" ("Al Amal" in Arabic), carries three science instruments, including the Emirates Mars Infrared Spectrometer (EMIRS), an interferometric thermal infrared spectrometer developed by Philip Christensen of ASU’s School of Earth and Space Exploration with Christopher Edwards of Northern Arizona University’s Department of Astronomy and Planetary Science, in a partnership with the MBRSC. 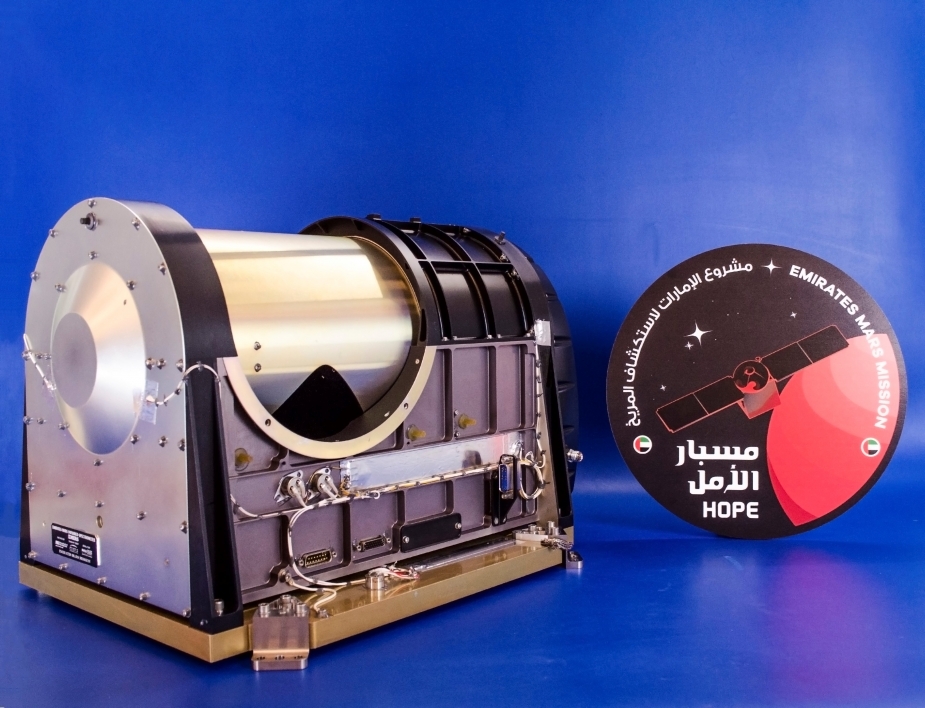 The ASU-built Emirates Mars Infrared Spectrometer (EMIRS) on the UAE Hope Orbiter will examine temperature profiles, ice, water vapor and dust in the atmosphere of Mars. 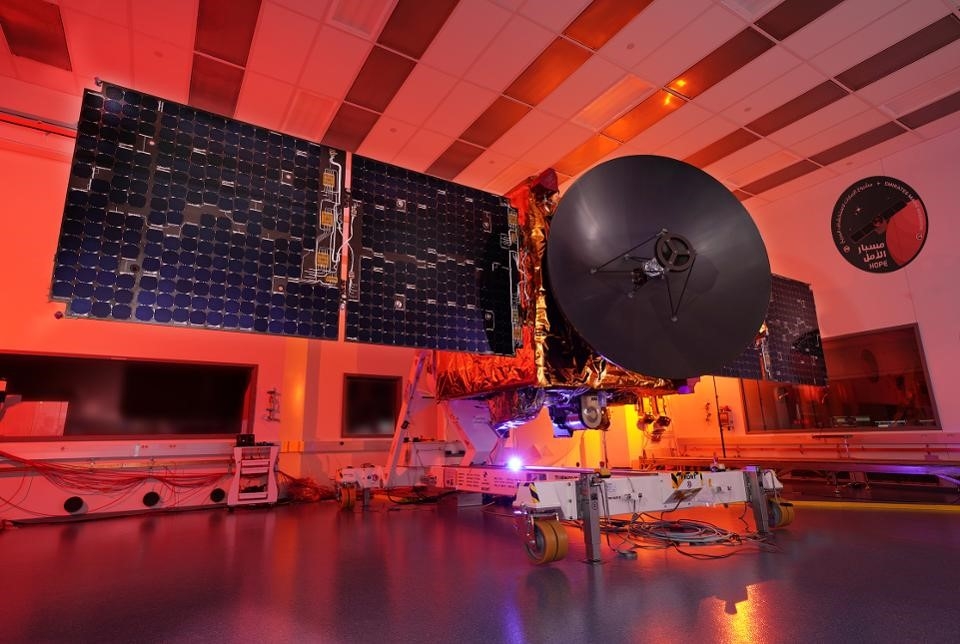 The Emirates Mars Mission Hope spacecraft prior to shipment to Dubai and the Tanegashima launch site, with fully deployed solar panels and instruments visible (facing the floor), measuring nearly 5 meters across.

“It has been a wonderful experience to work with the UAE team on this unique international partnership,” said ASU Regents Professor and planetary scientist Christensen. “Only a very small number of nations have sent missions to Mars, and it is a real honor for ASU to have been invited to participate in this exciting adventure.”

In addition to EMIRS, the orbiter includes a multiband camera called the Emirates eXploration Imager (EXI) and a far-ultraviolet imaging spectrograph called the Emirates Mars Ultraviolet Spectrometer (EMUS). The EXI camera is capable of taking high-resolution images and will measure properties of water, ice, dust, aerosols and ozone in Mars’ atmosphere. The EMUS spectrometer will measure global characteristics and variability in the thermosphere and hydrogen and oxygen coronae. Both were developed at the Laboratory for Atmospheric and Space Physics (LASP) at University of Colorado, Boulder.

The spacecraft, which is about the size of a small car, was constructed at LASP by a joint MBRSC/LASP team led by project director Omran Sharaf from MBRSC and deputy program manager and science lead investigator Her Excellency Sarah Al Amiri. The overall team working on the mission comprises some 200 staff from MBRSC, 150 from LASP and 100 from other partners, as well as an international science team.

“Collaboration and knowledge transfer have been key to the development of the Emirates Mars Mission,” said Sharaf. “Our partners at ASU and NAU have been key to ensuring the success of the mission, delivering an extraordinary instrument in almost half the time of conventional missions but also in providing the resources and knowledge we need to drive our own development of space systems engineering and planetary science.”

The mission’s name, Hope, was chosen to send a message of optimism to millions of young Arabs, according to Sheikh Mohammed bin Rashid Al Maktoum, the Ruler of the Emirate of Dubai for whom MBRSC is named. The resulting mission data aims to make major advances in our understanding of the Martian climate system and will be shared freely online with more than 200 institutions worldwide.

“The science enabled by the Emirates Mars Mission will be second to none, but the goals of the mission don’t stop there,” said Edwards, who is the instrument scientist for EMIRS. “The collaboration developed through this project has helped train the next generation of engineers and scientists in the UAE through professional and student opportunities. It’s been an amazing experience and has cultivated lifelong colleagues and friendships that will endure beyond the Hope Mission to Mars”

Visit the Emirates Mars Mission page for updates on the launch status and to watch live coverage of the launch.

EMM was conceived to disrupt and accelerate the development of the UAE’s space sector, education and science community, and will send the Mars Hope probe to orbit Mars in February 2021. Hope aims to build the first full picture of Mars’ climate throughout the Martian year.

EMM and the Hope probe are the culmination of a knowledge-transfer and development effort started in 2006, which has seen Emirati engineers working with partners around the world to develop the UAE’s spacecraft design, engineering and manufacturing capabilities.

The Mars Hope probe will reach Mars orbit in 2021, the 50th anniversary of The Emirates, which became an independent nation on Dec. 2, 1971.