Arizona State University Regents Professor Carlos Vélez-Ibáñez was recently named the 2020 recipient of the Franz Boas Award for Exemplary Service to Anthropology by the American Anthropological Association (AAA) for his outstanding contributions to the field of anthropology.

The Franz Boas Award, named after the father of American anthropology, is one of many accolades Vélez-Ibáñez has earned for his contributions to the field of study. During his career, he has published 75 articles and chapters and 12 books. 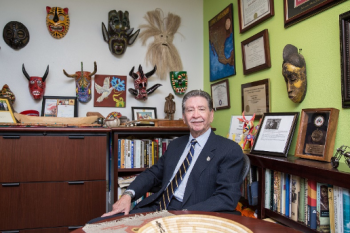 Vélez-Ibáñez has been with ASU since 2005, teaching in the School of Human Evolution and Social Change as well as the School of Transborder Studies, where he served as founding director emeritus. His work focuses on the migration and adaptation of human populations in the transborder regions of the Southwestern United States and Mexico, with an emphasis on uncovering how certain populations are able to survive and excel.

“Professor Vélez-Ibáñez’s work has impacts and consequences in line with the Boasian tradition,” said Jocelyn Ahlers, AAA awards committee chair. “His work is strongly grounded in community-based research with far-reaching impacts on policy and programs. To name only a few areas, his work has had impacts in cultural ecology, migration and transborder studies. He exemplifies the scholar as an activist.”

Vélez-Ibáñez shared more about his work and how it feels to win this esteemed award.

Question: How did you feel when you found out you had won the Franz Boas Award for Exemplary Service to Anthropology?

Answer: Astounded! Absolutely astounded! The winners of years past are very well-known for their research work and how they’ve contributed to the field of anthropology as a discipline. I’m elated and astonished that I received the award. I'm in very select company. I’ve received other awards in my career and they have been surprises as well, but this is the biggest surprise of them all. This is truly a recognition that shows that my peers appreciate what I’ve done, and that’s what’s important.

Q: Are there any challenges you’ve faced in your career and, if so, how have you overcome them?

A: The biggest challenge of course is going to work at a major university, coming from my background. My dad was a mechanic and my mother had a third-grade education. They always insisted that the university was the place for me to be, regardless of our economic background. My dad was instrumental in giving me that impetus. Each step in my journey has been a difficult one, and the challenges I’ve encountered took a lot of hard work and assistance from people who thought that what I was doing was worthwhile.

Q: What do you enjoy most about working at ASU?

A: The students. I love to teach and to push my students as hard as I can so they can learn to learn. I try to teach them not just material that has to do with things anthropologically but also how to organize their thinking. Aside from the students, this university is overwhelmingly innovative. There’s nothing to stop you from doing anything at this university. If you have a good idea, this is the place to be. There’s nothing that can stop you from doing something here except for yourself.

Q: What is a project you’ve worked on that you’re most proud of?

A: One of the best projects I've ever been a part of is the College Assistance Migrant Program (CAMP). This project provides the intellectual and social infrastructure for migrant students to be recruited, enrolled, sustained and graduate from ASU. It’s been a great success with about a 95% retention rate of our students. This year we graduated our first cohort. It’s a very dynamic, group-oriented project that provides them the valuable resources they need to succeed.

Q: What advice would you give to other anthropologists and educators?

A: Never give up, never give in and never accept no. Everything that I've done, I've done with that in mind. Always have the vision that the work you're doing has to benefit somebody else. Also, if you do your work really well, you'll generate the attention that you deserve.