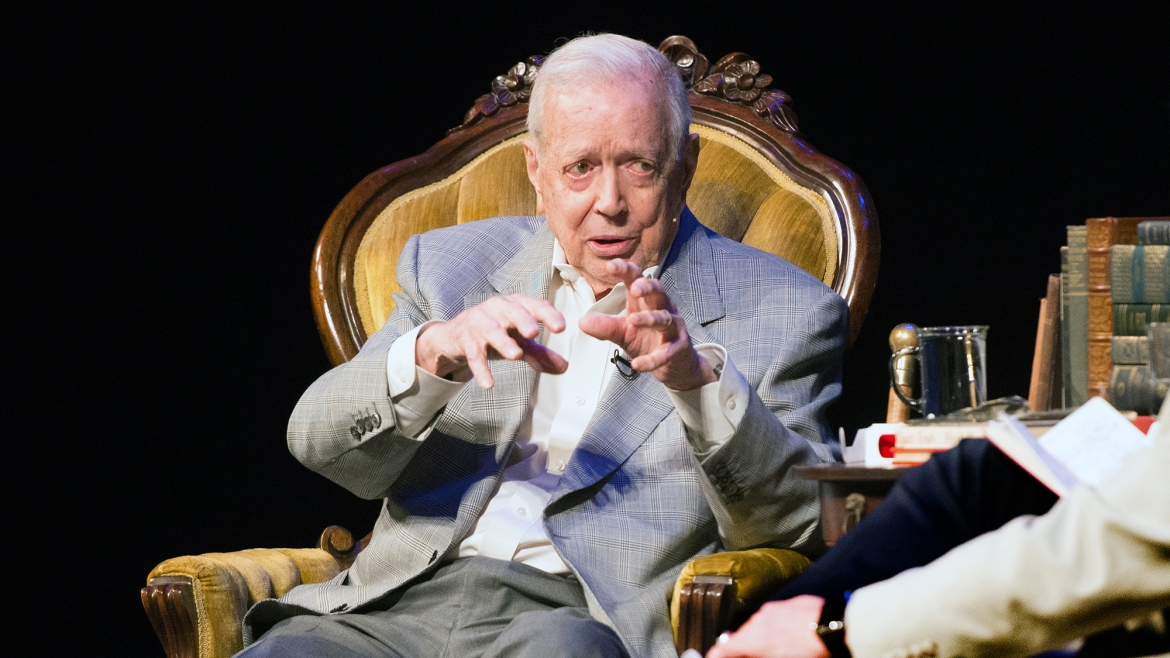 When asked to lend his name to the communication school at ASU in 1999, Hugh Downs admitted he was overwhelmed.

The legendary broadcaster, who passed away July 1, 2020, at age 99, is fondly remembered by faculty and staff at the communication school in The College of Liberal Arts and Sciences at ASU that bears his name.

President’s Professor Janet “Jess” Alberts was director of the school at the time. She credits philanthropist Jeanne Herberger with the idea to name the school after him.

“Jeanne and her husband Gary were good friends with Downs and his wife Ruth,” said Alberts. “She said Hugh Downs personified everything taught in the school, and I agreed.” 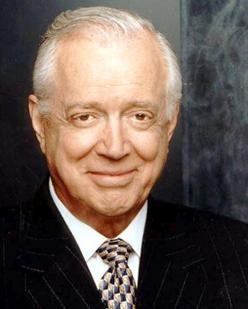 Herberger is a three-time alumna of ASU’s school of communication, earning a bachelor's degree, master's degree and PhD.

“She was a wonderful supporter of the school,” said Alberts. “She provided funding for endowed professorships, fellowships and initiatives.”

Downs had just retired from the ABC show "20/20" when they brought the idea to then-ASU President Lattie Coor. Alberts remembers that he too thought it was a great idea to name the school after Downs.

Not long after that, there was a press conference announcing that the school would now be named the Hugh Downs School of Human Communication.

Alberts says ASU then held a fundraiser for the newly named school. “Because of Hugh and his connections and friends from across the nation, including ABC, we were able to raise tens of thousands of dollars for scholarships,” she said.

Professor of Practice Pauline Davies remembers the delight he took in meeting with students. Students would line up to get their photo taken with
Hugh Downs after he spoke to their class.

“Hugh would come into my COM 100 class each semester and enchant the students with his lifetime memories of broadcasting,” said Davies. “From his early days as a teenager in the Great Depression when he stumbled into radio announcing, to his days as a TV star when he got to officially move the pole in Antarctica that designates the most southerly point, to training alongside NASA astronaut John Glenn as he prepared to go into space. Often Ruth, the woman he worshiped and credited for his success, would be with him. They would discuss how they stayed so happy after 60-plus years together. They had been married for over 70 years when Ruth died in 2017. No questions to them were off-limits and the students adored them, queuing up for photos after class, which they excitedly texted to their parents and grandparents.”

One of his great points of pride was in mastering theoretical physics, recalls Davies.

“He devoured popular books on the subject and then read research papers," she said. "This led to a great friendship with my husband Paul Davies, a theoretical physicist and writer based at ASU. Whenever we all met up for dinner, Hugh would take out the list of insightful questions and comments he had compiled after reading one of Paul's books or papers and want to know more. Hugh even attempted to develop his own theories, which led to many discussions. We will miss him."

Paul Davies recalls that their many dinner conversations extended to foreign travel, anecdotes about their various media experiences and politics. 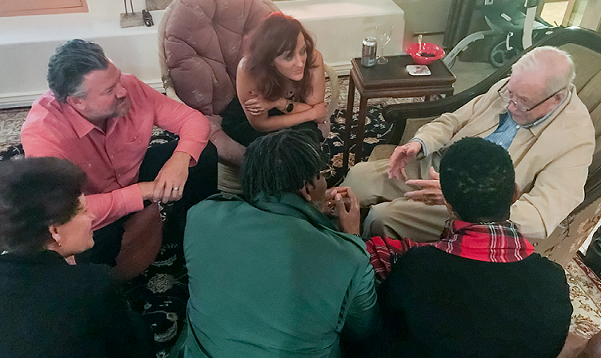 “Hugh and Ruth came to dinner at our house on election night in 2016, which was of course dramatic,” he recalled. “It was fascinating to obtain firsthand the reaction to the result from two people who had been at the forefront of global politics for decades.

“Hugh was irrepressibly positive. He was fond of saying, in his nineties, that with every decade, life got better for him. His devotion to Ruth was legendary; he was clearly proud of her dogged determination not to let ill-health defeat her, and would write us long missives about her medical progress, on one occasion comparing her to the famous female warrior Boudica.”

Professor and Director of Doctoral Studies at the Hugh Downs School Benjamin Broome recalled Hugh Downs as a lifelong learner who had a strong belief in the critical role played by higher education in promoting informed democratic discourse.

“With his easy-going conversational style, he always put students at ease. Even though most students were only toddlers or not yet born when Hugh Downs anchored ABC’s '20/20' with Barbara Walters, his stories of interactions with famous individuals held students spellbound. He had a unique way of relating historical events to current social issues, and he was constantly imagining a better future of our planet (and beyond). He inspired students to stay informed, to care about the challenges facing our world and to work for changes that would improve the human condition.”

“In 1960, Hugh was Jack Paar’s sidekick on 'The Tonight Show.' One night, Jack told a four-minute story that was (from a modern perspective) very slightly off-color (about the bathroom). NBC decided not to air the joke and replaced it with a news update.

"The next night, Jack Paar returned to the show, expressed his anger at what NBC had done, and quit the show… during the taping of that night’s show. This left Hugh to be the host for the night. A total surprise, no advance warning, no time to prepare.

"I always wondered what it was like to be in that position. When my family and I had a chance to give Hugh a ride to the Hugh Downs School holiday party, I took the chance to ask him about it. By the time I got half-way into my question, he was already laughing about it. When I asked him what it was like, he said simply ‘It was no big deal. You do your job.’

"Nearly 60 years later, he went on to talk about it as if it happened the previous week. ‘Do your job.’ Good advice.” 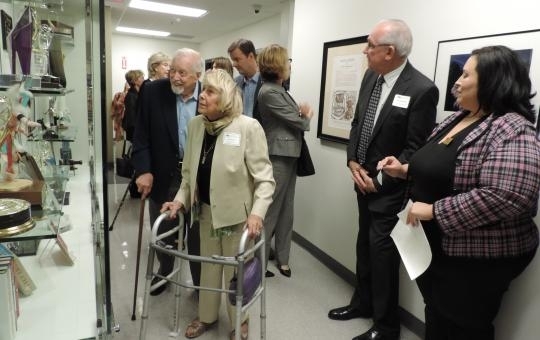 Hugh Downs with his wife Ruth in 2013 when he generously donated hundreds of his personal and professional items reflecting his renowned broadcasting career to the Hugh Downs School of Human Communication.

“Sometime around 2006, Hugh was scheduled for a photo shoot and interview, which was to take place in one of the libraries here on campus," she recalled. "I was asked to drive him to the library in the golf cart and then escort him to the room where it would happen. As we were walking along a hallway, a custodian walked towards us and said, ‘Good morning, aren’t you Hugh Downs?’ Hugh stopped in his tracks and said, ‘Yes, I am, what’s your name?’ The custodian absolutely lit up and gave his name. Then Hugh asked him a couple of questions about his work at ASU. I’ll bet that man is still telling the story, and I was able to witness what a lovely, humble man Hugh Downs was.”

In the days since the passing of Hugh Downs, Alberts says she’s read a lot the stories written about him.

“I didn’t feel like any of them they captured the Hugh Downs that I really knew,” she said. “He was great because of who he was.”

The Arizona State University Alumni Association recently added a new international alumni group in Israel to its chapter network. With over 150 ASU alumni residing in Israel, the Alumni Association board approved the formation of this group at its recent meeting. “I'm very excited to start this connection between ASU alumni in Israel and to connect to my alma mater,” said chapter leader Saman...

The Arizona State University Alumni Association recently added a new international alumni group in Israel to its chapter network. With over 150 ASU alumni residing in Israel, the Alumni Association board approved the formation of this group at its recent meeting.

“I'm very excited to start this connection between ASU alumni in Israel and to connect to my alma mater,” said chapter leader Samantha Rush Soclof, ’12 BS kinesiology. “I believe by creating this network, it can become a source to drive innovation and create meaningful professional relationships with other Sun Devils.” 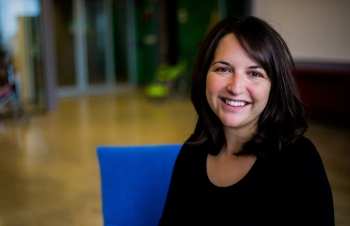 “ASU alumni are living and working around the globe and many of them want to celebrate their Sun Devil spirit and passion for helping to advance their alma mater with other alums,” said Christine K. Wilkinson, president of the Alumni Association. “We’re pleased to support their efforts to stay connected with ASU and spread its message globally.”

The Sun Devil chapter network keeps alumni connected to ASU, whether it be through their academic program, their current geographic location or the registered student organizations or university sponsored student groups in which they participated. Chapters sponsor a range of activities for their members, including networking events, Sun Devil game-watching celebrations, outdoor recreational activities, and service-oriented volunteer projects. Many chapters give back to the next generation of ASU students by providing mentoring services, by hosting Sun Devil Send-Offs for incoming ASU students, or by awarding scholarships. To learn more about the association’s chapter network, including how to organize a new alumni group, visit https://alumni.asu.edu/chapters.