Arizona State University offers a variety of accelerated programs allowing students to earn both a bachelor’s and master’s degree in as little as five years.

The School of Historical, Philosophical and Religious Studies has partnered with Thunderbird School of Global Management to offer a new 4+1 program allowing students to receive an undergraduate degree in a humanities-related field and a graduate degree in global management. 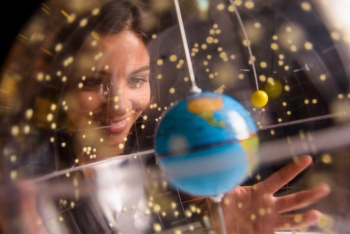 As the world continues to grow as a global market, the demand for knowledge across many disciplines is growing. The partnership allows humanities majors to pursue management careers and because it is an accelerated program, they can save both time and money.

“With all the disruptions in the era of the Fourth Industrial Revolution and more recent disruptions caused by COVID-19, students with diverse skill sets are future-ready and have a higher chance of success in today’s ever-changing world,” Booth said.

There are many new paths available through the program. A student can receive a degree from the School of Historical, Philosophical and Religious Studies and can pair it with the global management graduate degree and could add on any of its four concentrations, including global business, global affairs, global digital transformation or global entrepreneurship.

“Whether studying business ethics, the history of renewable energy or the geopolitics of religious identity, the knowledge and skills SHPRSSchool of Historical, Philosophical and Religious Studies majors acquire in history, philosophy and religious studies courses provide a solid foundation for leadership in a global context and humanities degrees are sought-after in international boardrooms,” Amesbury said.

Thunderbird strives to have a student body that is professionally and culturally diverse and the new accelerated program helps both schools achieve that. By enrolling in the program, students can pursue their passions while training to be global leaders.

“Many global organizations documented that diverse teams are the most innovative and are able to offer many unique perspectives to solve world challenges,” Booth said. “Humanities play a big role in educating global leaders to advance inclusive and sustainable prosperity worldwide. At a time when the world is experiencing record environmental challenges, the rise of nationalism and parochialisms, and the impact of disruptive technologies, it is increasingly important for global leaders to be equitable and inclusive, govern and lead with compassion.”

Students who are considering the program are recommended to take their required undergraduate courses early to leave room for at least twelve hours of electives their senior year. By leaving those credits open, students can ensure they can complete the shared courses for the Thunderbird program.

Soil erosion is a growing worldwide challenge. Its spread threatens dire consequences for the health of fragile environments and the stability of natural resources, agriculture, civil infrastructure and other essential foundations of society. That’s why engineers and scientists are employing advanced technologies — sensing systems, laser-based ground surface change detection and monitoring dev...

Soil erosion is a growing worldwide challenge. Its spread threatens dire consequences for the health of fragile environments and the stability of natural resources, agriculture, civil infrastructure and other essential foundations of society.

That’s why engineers and scientists are employing advanced technologies — sensing systems, laser-based ground surface change detection and monitoring devices, and highly precise measurement tools — to better observe, prevent or reduce soil erosion. In some cases, they even induce it for experimental purposes. 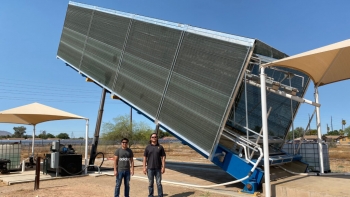 Robin Cheng (left) and Eric Escoto are pictured with a large landfill tipper at a field laboratory on Arizona State University’s Polytechnic campus. The tipper is an essential part of the facility designed for soil erosion research. Led by Escoto, a geological sciences doctoral student, the project aims to develop more effective ways to observe, prevent and reduce soil erosion that is creating environmental hazards in many places around the world. Photo courtesy of Kimberly Martin/Center for Bio-mediated and Bio-inspired Geotechnics Download Full Image

Those mechanisms have been incorporated into an installation called the large outdoor rainfall and infiltration simulator, or LORIS, at the Center for Bio-mediated and Bio-inspired Geotechnics Soils Field Laboratory on Arizona State University’s Polytechnic campus. The structure is the defining project in Eric Escoto’s research as a geological sciences doctoral student in ASU’s School of Earth and Space Exploration.

Through the facility’s capabilities, Escoto hopes to contribute to the development of more effective methods of large-scale erosion control and reduction of soil loss.

Escoto has spent nearly three years designing and building LORIS to exceed the compliance standards set by the American Society of Testing and Materials, known as ASTM.

Bolstering resilience to the erosive impacts of wildfires, earthquakes, flooding and other extreme events — as well as human actions that alter ecosystems — is critical to the sustainability of communities’ water, power, transportation, waste control and public safety systems.

Escoto aspires to take steps toward solutions that protect against such perils. He foresees finding answers in the voluminous trove of data to be amassed through his project’s penetrating probes into the intricate interactions of rain and soil.

The work is part of the Center for Bio-mediated and Bio-inspired Geotechnics' mission as a National Science Foundation, or NSF, Engineering Research Center at ASU. The center is directed by Edward Kavazanjian, an ASU Regents Professor and the Ira A. Fulton Professor of Geotechnical Engineering in ASU’s Ira A. Fulton Schools of Engineering.

Escoto’s adviser is Enrique R. Vivoni, a professor on the faculties of both the School of Earth and Space Exploration and the School of Sustainable Engineering and the Built Environment, one of the six Fulton Schools, in which Kavazanjian also teaches.

The simulator is designed to direct rainfall in specific amounts to a soil test bed. Runoff from the test bed will then be measured by sensors to determine the amount of water, the loss of sediment induced by erosion and the infiltration and storage of water in the soil. 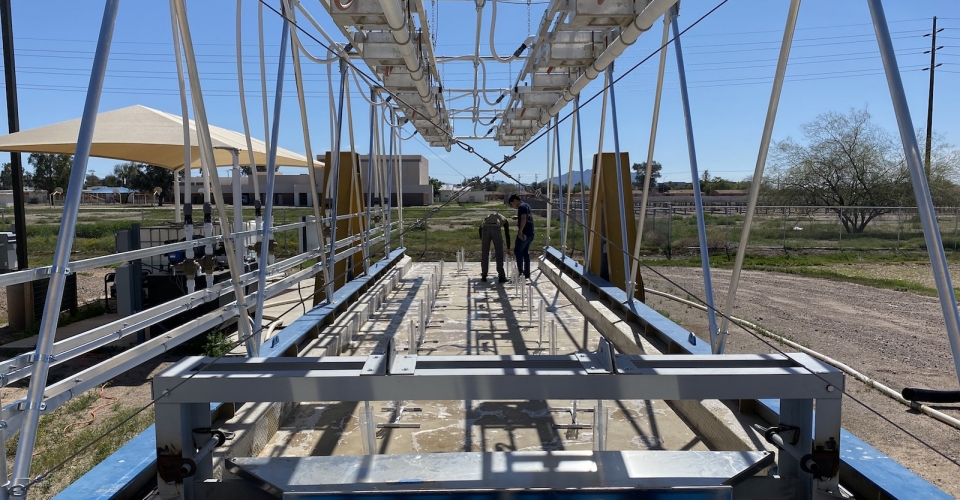 Zachary Keller (left), a geological sciences graduate student, and Robin Cheng are shown positioning the rain gauges for a calibration test on the large outdoor rainfall and infiltration simulator. The system features nozzles designed to shower a soil bed with water that simulates the size and distribution of natural raindrops. Others who have helped with the design, construction and operation of the research facility include ASU mechanical engineering graduate Anant Gogate, civil engineering graduate Brandon Bohan and current civil engineering undergraduate Leslie Bautista. Photo courtesy of Eric Escoto

“Our region is an important factor in the design and use of the rainfall simulator,” Vivoni said. “The Sonoran Desert region in Arizona has two rainy seasons, winter and the summer monsoon season, which have their own distinct types of rainfall.”

Dry conditions and high winds characteristic of the regional climate affect the runoff measurements in several ways, including how the raindrops travel through the simulation apparatus and how the soil test bed dries between experiments, Vivoni says.

A significant feature of the rainfall simulator is the “landfill tipper” used to elevate the soil test bed, Kavazanjian says. Tippers are commonly used to empty municipal solid waste transfer trailers at landfills. They can tilt the trailers by an angle of up to 45 degrees so the waste material falls completely out of the trailer and onto landfill surfaces.

Synthetic rainfall is then induced by an overhead sprinkler system equipped with nozzles designed to shower the soil bed with water in a way that simulates the natural size and distribution of raindrops.

Digging deeper into the complex interplay of water and soil

Escoto’s project furthers the work of the Center for Bio-mediated and Bio-inspired Geotechnics' on biogeotechnical treatments to enhance the properties of soil. His initial experiments will focus on the effectiveness of a process developed for wind erosion control for controlling erosion due to surface water runoff. He will explore possibilities for enhancing that process.

The ability to measure surface water infiltration, subsurface soil water storage and surface water runoff enables the facility to do much more than evaluate the effectiveness of erosion control technologies and methods.

“We can do fundamental research on what is referred to as water balance, which is how the total precipitation is divided between runoff, storage in the soil and percolation through the soil on a sloping surface,” Kavazanjian said.

“Using water balance analyses, we can also investigate the impact of various erosion treatments and the associated infiltration of surface water on slope stability and the effectiveness of soil covers for landfills and hazardous waste containment systems, and address a number of equally important geohydrological challenges,” he said.

LORIS is one of only four facilities of its kind in the United States, Kavazanjian points out. The others are a U.S. Department of Agriculture facility at Purdue University, a commercial facility in South Carolina and another research installation at Texas A&M University.

Vivoni notes that ASU’s facility includes a terrestrial scanning light detection and ranging device, known as lidar, to measure the erosion of surface soil through the use of a focused laser beam to reveal changes in soil elevation after erosion treatment tests.

In addition, the facility includes an outdoor weather station and an optical disdrometer, a laser-based precipitation sensor that samples the size and speed of individual synthetic rainfall droplets.

With the combination of those technologies, Escoto expects the facility to yield data to help produce synthetic rainfall that mimics the physical characteristics of natural rainfall.

He will compile additional data to guide him in enabling the simulator to adjust the drop size, velocity, evaporation and impact force of both natural and synthetic rainfall to varying meteorological conditions and other environmental factors.

“I also want to make use of the experimental facility as an educational tool open to all,” said Escoto, whose doctoral studies are supported by an NSF Graduate Research Fellowship and the ASU Graduate College Interdisciplinary Enrichment Fellowship. The NSF fellowships are awarded to graduate students who show potential to be education and research leaders in their fields.

“The project is geared to being accessible to the public for opportunities to learn about rainfall-induced erosion on hillslopes and regional flood hazards through hands-on demonstrations of rainfall and erosion processes,’’ Escoto said.

He also wants to see the simulator facility be adapted for use in other areas of engineering and science — in particular research aimed at making advances in weather and hydrology research.