In just three years’ time, the group of faculty behind the Law and Behavioral Science initiative took Arizona State University from relative obscurity in the field to one of the most dominant players. In recognition of their dedication and hard work, the original team of eight who founded the initiative has been named the recipient of the 2020 President’s Award for Innovation.

Nicholas Schweitzer, founding director of the group and an associate professor in the School of Social and Behavioral Sciences, said it is an honor to be recognized, but their success would not have been possible without the commitment of the ASU faculty and students who have contributed to the initiative’s success over the years. 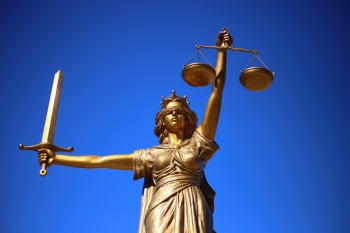 “It’s pretty unusual to go from nothing to the kind of scale and the scope we have in just a few years,” Schweitzer said. “When I looked back at how many times ASU has presented at national and international conferences, we had more people presenting than any other university in the world. And we’ve been very fortunate because we’ve been able to recruit the best students and the very best faculty.”

The purpose of the initiative is to bring together scholars and students from across ASU whose research interests are at the intersection of law and psychology, an area which has broad appeal and an exciting potential for real-world impact.

“This team has been incredibly innovative in taking scientific principles about human behavior from psychology — including social, cognitive and affective processes — and integrating them with an understanding of law and legal institutions to address important societal problems,” said School of Social and Behavioral Sciences Associate Director Nicole Roberts.

“They were front-runners in bringing together topics to create a new, and hugely popular, field of study at ASU — forensic psychology. Although there are now many interdisciplinary teams at ASU, they were one of the first not only to engage in this, but also to gain traction among students at all levels — undergraduate through doctoral — and to draw national attention as a destination for cutting-edge research in psychology and law. Their research questions have widespread implications, such as how to reduce bias in the legal system; how to understand who is convicted or exonerated and under what circumstances; and how to change ineffective or unfair practices within the criminal justice system. Their collective work allows them to examine individual- and institutional-level processes using a variety of descriptive and experimental methods.”

The initiative’s founding team will be recognized by ASU President Michael Crow at a ceremony this fall. They include faculty from the Sandra Day O’Connor College of Law, the Watts College of Public Service and Community Solutions and the New College of Interdisciplinary Arts and Sciences:

The President's Award for Innovation honors ASU faculty and staff who have made significant contributions to the university and higher education in general through the creation, development and implementation of innovative projects, programs, initiatives, services and techniques.

Since its founding, the Law and Behavioral Science initiative has grown to include 32 core and affiliated faculty across seven schools and colleges at ASU, operating five cross-school academic programs that educate over 1,300 students at the undergraduate, master's degree and doctoral levels, placing it among the largest in the world of its type.

“We already had the intellectual base to do something like this and just needed to be brought together with some organizational structure,” Schweitzer said. “Once that happened, we realized we were really poised to do something big.”

The initiative is responsible for research that has looked into such issues as how emotion affects jury members’ decision-making, the effectiveness of tools used to assess one’s competence to stand trial and more.

In coordination with Monday's national launch by the John McLendon Minority Scholarship Foundation, every head men's basketball coach from the Pac-12 Conference has pledged his support to participate in the McLendon Minority Leadership Initiative. ... In coordination with Monday's national launch by the John McLendon Minority Scholarship Foundation, every head men's basketball coach from the Pac-12 Conference has pledged his support to participate in the McLendon Minority Leadership Initiative.