For some children, screen time before bed translates to less sleep.

According to a study from the Arizona State University Department of Psychology, media use in the hour preceding bedtime impacts how kids sleep, especially children who struggle to self-regulate their behavior. Frequent media use before bed in these children predicted later bedtimes and less sleep. The work was published online in Psychological Science on June 19. 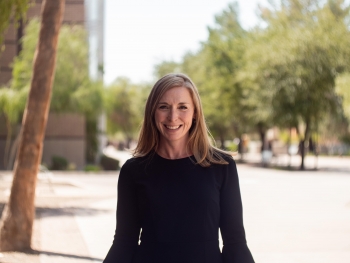 “Among kids who used the same amount of media in the hour before bed, we found differences that were explained by a personality characteristic called effortful control,” said Leah Doane, associate professor of psychology at ASU and senior author on the paper. “Kids who score low on measures of effortful control are the ones who struggle to wait to unwrap a present or are easily distracted. We found a strong association between media use in the hour before bed and when these kids went to sleep and how long they slept. Media use before bed was not associated with the sleep of kids who scored high on measures of effortful control.”

The research team spent a week following 547 children, aged 7-9 years. The participant group was socioeconomically diverse and lived in rural and urban areas. The parents kept daily diaries that tracked the children’s media use and sleep patterns. They also completed a survey that asked about their children’s temperament, including their ability to self-regulate behavior.

For the entire week, the children wore specialized wrist watches called actigraphs that tracked their movement and also ambient light. The actigraph data gave the research team detailed information about when and how long the children slept.

“Media use was generally associated with a shorter sleep duration, but this effect was most pronounced in children with low effortful control,” said Sierra Clifford, a research scientist at ASU and first author on the paper. “The impact of media on sleep was also an average effect, meaning that it reflects habitual media use rather than occasionally staying up late to watch a movie.”

The children who scored low on measures of effortful control slept the least amount of time when they consistently used media in the hour before bed during the study week. These children slept approximately 40 minutes less per night. Media use before bed did not affect the sleep of children who scored high on effortful control, which was approximately 35% of the study participants.

Children with low effortful control might struggle with switching their attention from watching media before bed to calming down and falling asleep. But because effortful control is a personality characteristic, it is more difficult to change.

“Instead of parents wondering how to help their child better regulate their behavior, they can try to focus on creating more consistent sleep and media use schedules,” Doane said.

This study was funded by the Eunice Kennedy Shriver National Institute of Child Health and Human Development. The data were from the Arizona Twin Project, which is led by ASU’s Kathryn Lemery-Chalfant, Mary Davis and Doane. Reagan Breitenstein, who earned her doctorate at ASU, Kevin Grimm, professor of psychology, and Lemery-Chalfant also contributed to the study.

Throughout California, the effects of climate change are evident, from increasing frequencies of intense wildfires and mudslides to widespread and prolonged droughts. These changes also threaten one of California’s most iconic endemic species: coastal redwoods. Coastal redwoods are not only some of the tallest and oldest trees on Earth, but redwood forests are also capable of storing three times...

Throughout California, the effects of climate change are evident, from increasing frequencies of intense wildfires and mudslides to widespread and prolonged droughts. These changes also threaten one of California’s most iconic endemic species: coastal redwoods. Coastal redwoods are not only some of the tallest and oldest trees on Earth, but redwood forests are also capable of storing three times more carbon than any other forest. Identifying suitable habitats for these vulnerable species has important implications for carbon sequestration and redwood forest biodiversity. This is especially urgent given that some regions within the current redwood distribution in California (south of San Franscisco Bay) could become unsuitable for redwoods as soon as 2030. 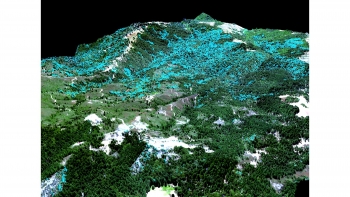 “Habitat suitability of coast redwood has been studied before, but not using high-resolution data at the landscape scale," said Emily Francis, lead author of the study. "The approach we employed here could be applied in other forest types to gain new insight into the role of moisture availability in landscape-scale patterns of habitat suitability for many tree species that may be vulnerable to climate change.”

The research was conducted in three redwood forests in California spanning approximately one-third of redwood latitudinal range. After analyzing spatial patterns in redwood distributions over more than 34,800 hectares (87,000 acres) across the three forests, the scientists found that redwood habitat suitability significantly varied in relation to moisture availability and fog across different landscape elevations. Redwood habitats were consistently more suitable at sites located closer to streams. The study also found that habitat suitability for redwoods ranged from 22%-75% within a single landscape, underlining the importance of considering landscape-scale variation while identifying sites that will continue to be suitable for redwoods, even as surrounding areas become inhospitable due to climate change.

“This study highlights the value of mapping the composition of our forests at high spatial resolution," said co-author Greg Asner, director of the ASU Center for Global Discovery and Conservation Science. "Doing so provides leverage to say something about the individual inhabitants within a forest, not just the forest as a blanket average. This, in turn, both enhances our knowledge and presents possible options for managing sensitive ecosystems undergoing climate change.”

The authors emphasized that predicting how climate change will impact future redwood distribution will require additional study to understand how both environmental and biological factors, such as tree seed dispersal and plant competition, will influence where redwoods are able to grow and survive.

This work was supported by the David and Lucile Packard Foundation, John D. and Catherine T. MacArthur Foundation, a Stanford Graduate Fellowship and Save the Redwoods League.