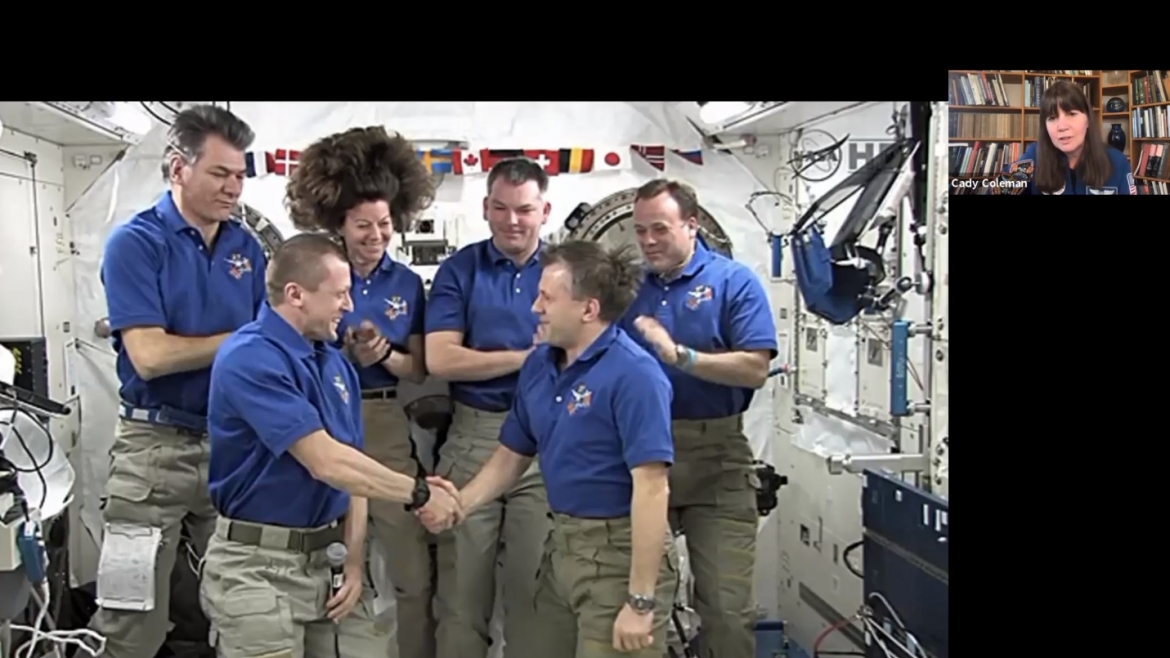 Making the future of space exploration a more inclusive one

When you’re an astronaut, whom do you represent? Do you represent the citizens of the country whose flag is emblazoned on your suit? Or do you represent a larger group of people, all those billions of humans whose lives light up the planet below you?

That was Juan Villoro’s first question for Cady Coleman, ASU’s Global Explorer in Residence and a former NASA astronaut, in Wednesday’s virtual Convergence Lab event. ASU’s Convergence Lab, a series of events usually held in person in Mexico City, brings together communities across borders to learn from each other — with the ultimate goal of building a better, shared North American future.

Villoro, a renowned Mexican journalist, novelist and playwright, spoke with Coleman about her experiences in space, and together the two discussed ways to make the future of space exploration a more inclusive one.

“I have my U.S. patch on my sleeve,” Coleman said, pointing to the American flag on her uniform. “It's hard to say this without sounding like you don't appreciate your home, or the fact that we all come from somewhere. But looking back at the Earth, we're all from the same place … we’re all from there.”

Though Mexico doesn’t have a national space program equivalent to NASA (the Mexican Space Agency is focused principally on research and education and doesn’t send humans to space), the country has a long history of looking toward the stars, Villoro said — from Mayan astronomers to present-day visionaries like Alfonso Cuarón, director of the film “Gravity,” which Coleman consulted on. 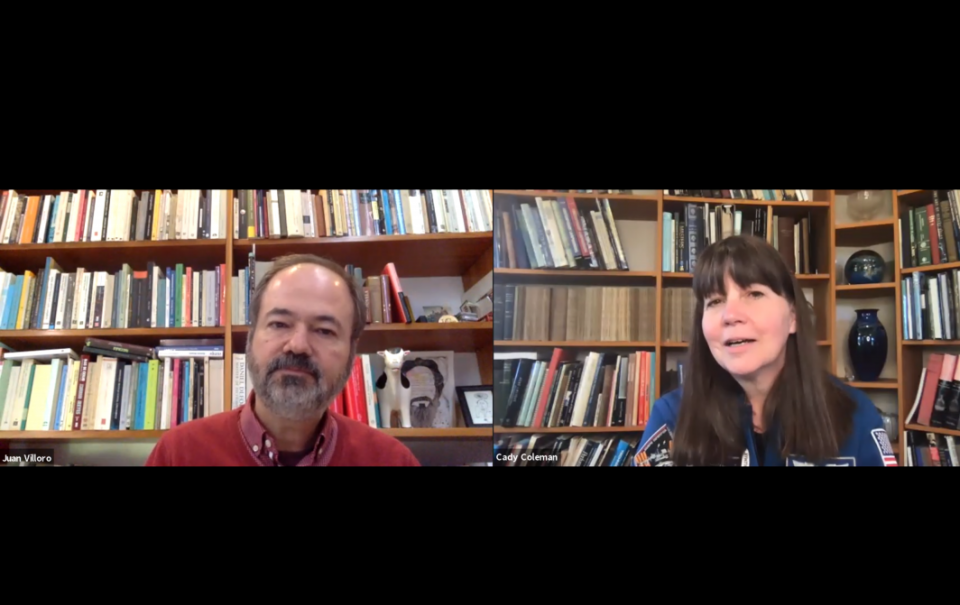 When Cuarón won an Oscar for “Gravity,” “many people thought, 'Well, how come a Mexican is so deeply interested in outer space and is so accurate in his redemption of what's going on out there?' ” Villoro said.

The answer, he said, is “because this adventure has been important for the whole human race.”

Villoro was 12 when Apollo 11 reached the moon, he remembered, “and for my generation that changed the whole idea of the universe.”

This shared idea of the universe is a constantly shifting one, Coleman said, especially as we push existing barriers and discover new limits to our knowledge of space, and also incorporate new perspectives into our exploration of it.

“What I discovered when I got to go to space was I used to think that we're here on Earth, and then space is somewhere else, and some people go,” she said. “But actually, Earth and the place that we call home is just bigger than we thought, and just not enough people have been to these edges yet.”

Through its School of Earth and Space Exploration and Interplanetary Initiative, ASU is trying to bring more people toward those edges. The ASU-led NASA Psyche Mission, set to launch in summer 2022, for example, offers free online classes that allow people from around the world to participate in the mission.

Villoro and Coleman discussed private-sector participation in space exploration: “I would go with whatever vehicle is leaving … I really love these additional collaborations,” Coleman said; human rights in space: “It’s a totally new turf,” Villoro said, which needs to be “solved by the whole community of the Earth”; and experiments on the International Space Station: “We’re learning things in space that really we can’t learn down here,” Coleman said.

One audience member, a psychology student from Mexico, asked Coleman for her advice to endure the social and physical isolation many of us have found ourselves in over the last several months. Coleman’s response? “Focus on the mission.”

Right now, there are many different important individual and societal missions, Coleman said. One is trying to keep ourselves, our families and our communities safe in the face of a global pandemic. Another is educating ourselves about our roles in systems that perpetuate racial inequality and injustice, and working to change that.

When asked by audience members whether they would jump on the opportunity to go to space again for an important mission, or accept a one-way ticket to Mars, Coleman and Villoro had different answers.

The truth is, Villoro, the storyteller, and Coleman, the astronaut, both have equally important roles to fill. Art and storytelling, Coleman said, are crucial to building our future in space.

“When people see themselves in a story, in problem solving, then they think, ‘Oh, maybe this could be me,” she said.

So whether you’re writing a book or directing a commercial or illustrating a cartoon, Coleman urged, “Please, please, please include other people that really don't look or feel like you, because they're part of the equation. And by them seeing themselves in your story, it makes all the difference.”

In space, said Coleman, the thing that links everyone to each other, despite different government positions or priorities, is “the passion for exploration.” That passion is what spurred collaboration on the International Space Station, she remembered.

“It's always the people between each other that build those bridges,” Coleman said.

Those are bridges we can build from anywhere in the universe.

Top image: Cady Coleman, ASU's Global Explorer in Residence and former NASA astronaut, shares a photo from the International Space Station and talks about the time she spent there during a binational Convergence Lab event June 17. Through two Space Shuttle missions and an almost six-month stint on the ISS, Coleman has logged a cumulative 180 days in space. Images courtesy of Cady Coleman and Mia Armstrong.

The Lincoln Center for Applied Ethics at Arizona State University was founded on the belief that ethical behavior can create better and more positive outcomes in every facet of life. Now, more than 20 years after the center was first established, this mission is being reinvigorated with an official move to the humanities and a new director.In July, Elizabeth Langland will take on the role of direc...

The Lincoln Center for Applied Ethics at Arizona State University was founded on the belief that ethical behavior can create better and more positive outcomes in every facet of life. Now, more than 20 years after the center was first established, this mission is being reinvigorated with an official move to the humanities and a new director.

In July, Elizabeth Langland will take on the role of director of the center. Langland has been with ASU since 2007, serving as vice provost of the West campus and dean of the New College of Interdisciplinary Arts and Sciences. Since then, Langland has served in several other roles at ASU, including interim dean of humanities at The College of Liberal Arts and Sciences and, most recently, as director of the Institute for Humanities Research. 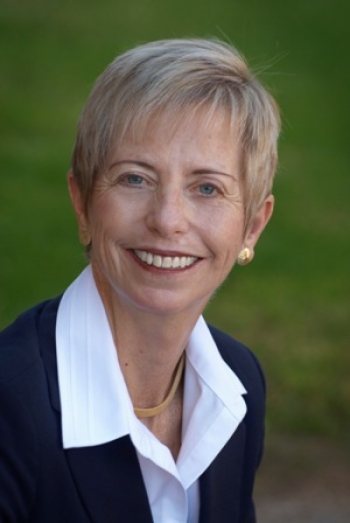 Elizabeth Langland has been appointed the new director of the Lincoln Center for Applied Ethics. Download Full Image

“This move marks the next chapter for the Lincoln Center and The College,” said Jeffrey Cohen, dean of the humanities. “Applied ethics in their relation to technology and innovation have never been more urgent, and this emphasis enables the center to fulfill founding vision of the Lincoln family. As we embark on this transition, I am confident that with Elizabeth’s outstanding leadership there will be many exciting collaborations and projects to come.”

Langland specializes in Victorian British literature, particularly in theory of the novel and feminist criticism. She has authored four books and dozens of articles and has edited or co-edited five books on these topics.

After working at other universities, Langland said she was drawn to ASU for the university’s unique emphasis on interdisciplinary and transdisciplinary study and collaboration. She said she sees ethics as an essential foundation for any discipline and hopes this move will encourage more cross-discipline collaboration moving forward.

“This is a way of really creating significant synergies with what other centers and departments are doing, because ethics truly is just a part of every aspect of our lives,” Langland said. “If you're studying business, it's important to think about what ethical practices are and why you want to institute ethical practices in business. If you're studying medicine, obviously we want to behave ethically toward patients. If we're thinking about engineering, we want to make sure bridges don't collapse and that buildings don't fall apart. All of these are critical issues to think about instead of just making profit.”

In addition to encouraging collaboration, the center will have a new focus on ethical innovation and humane technologies. With this new focus, Langland also hopes to collaborate beyond the university with innovators in the field of technology to inform ethically based innovation.