Arizona State University’s award-winning robotics submarine team, Desert WAVE, is not allowing COVID-19 to discourage their creativity and collaboration. The women’s autonomous underwater vehicle (AUV) team is all hands on deck for their second International RoboSub Competition, which will take place virtually in August 2020.

Desert WAVE was looking forward to returning to San Diego, California, following their success as the highest placing U.S. team in the 2019 global competition, but the pandemic threw a wrench in their plans. Though preparations for this year’s event have taken a turn, the team’s resilient spirit has not wavered. Their 3D printer was relocated from the Polytechnic campus to a team member’s home so submarine production could continue. Students also began independently developing parts for their AUV using the 3D computer-aided design software SolidWorks, then collaborated with other members of the team to get their concepts printed and finally delivered those parts to another member’s home for assembly and testing.

“The collaborative nature of this group can’t be diminished and it’s amazing to see their progress, even while working from home,” said Daniel Frank, Desert WAVE faculty adviser and lecturer at The Polytechnic School in the Ira A. Fulton Schools of Engineering at ASU.

Various forms of communication have kept this interdisciplinary team afloat.

“We have been meeting weekly on Zoom as well as keeping up through good old phone calls, group messaging and humorous get-to-know-me posts in the team Slack channels,” said Jessica Dirks, a scrum master and SolidWorks expert who just completed her third year studying human systems engineering.

“It impresses me to see the students learn how to do things, primarily on their own,” said Fariodin “Fredi” Lajvardi, a Desert WAVE mentor and vice president for STEM initiatives at the Si Se Puede Foundation. “Students are learning how to do computer-aided design, make custom electronic circuit boards and implement machine learning programs in addition to the essential programming skills needed to make the robot operate autonomously.”

Submission requirements for this year’s competition have been modified and include a team website, video and journal paper. The competition organizer, RoboNation, is prioritizing participant safety by canceling the in-person portion of the event and encouraging teams to share concepts, plans and parts instead of a completed AUV.

Desert WAVE looks forward to sharing components of their new AUV, such as a newly designed marker dropper, torpedo launcher, pneumatic system and grabber designed to manipulate objects underwater. They intend to improve each part as well as the overall system design for submission at the 2021 competition. Paulina Garibay Jaquez, who just completed her second year studying robotics engineering and is a member of the programming team, testing the thruster hall. 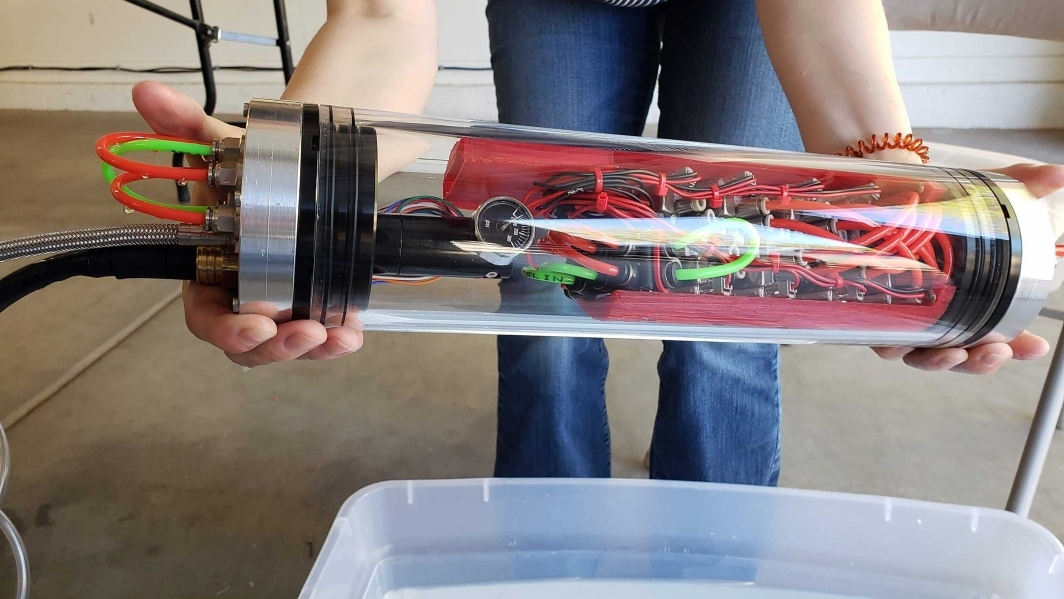 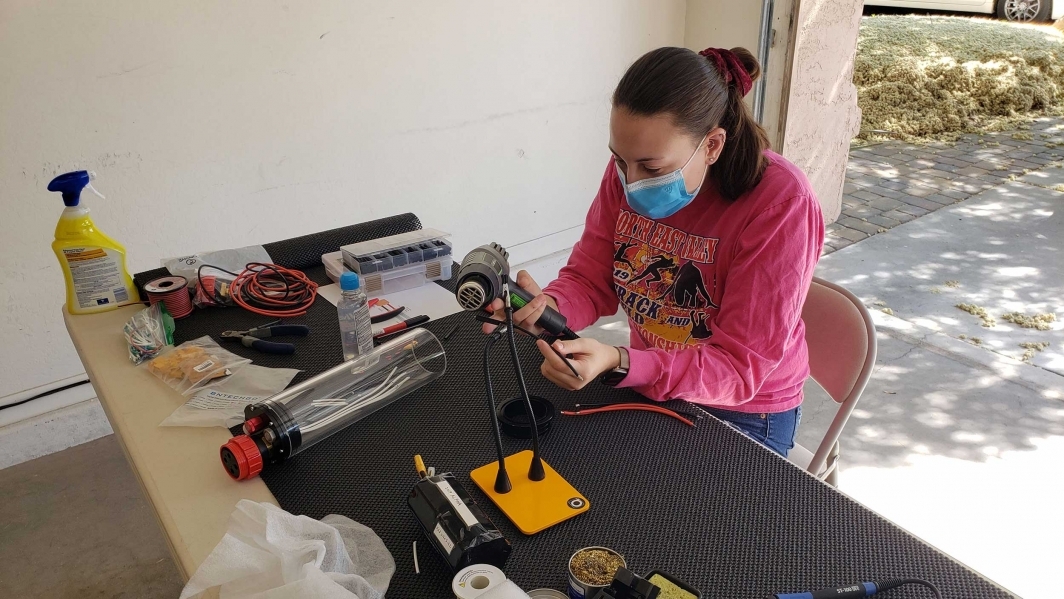 Laura Roty, a student at ASU's Barrett, The Honors College, who just completed her first year studying human systems engineering, assembling battery pod 1 as part of her responsibilities on the mechanical team. 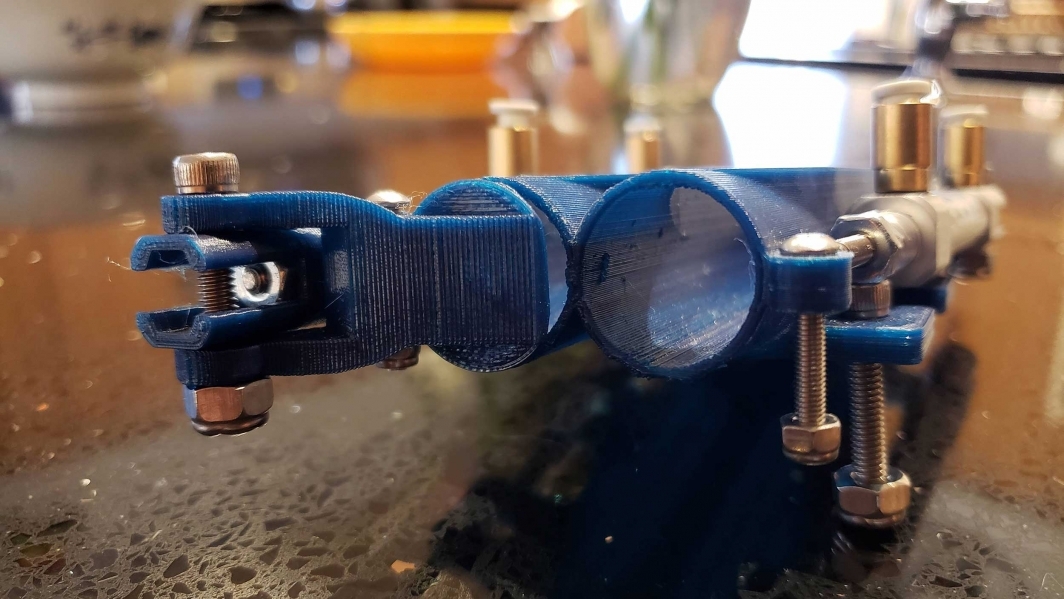 The torpedo launcher, pictured shortly after completion, will be mounted to the top of the AUV.
Photo Courtesy of Desert WAVE 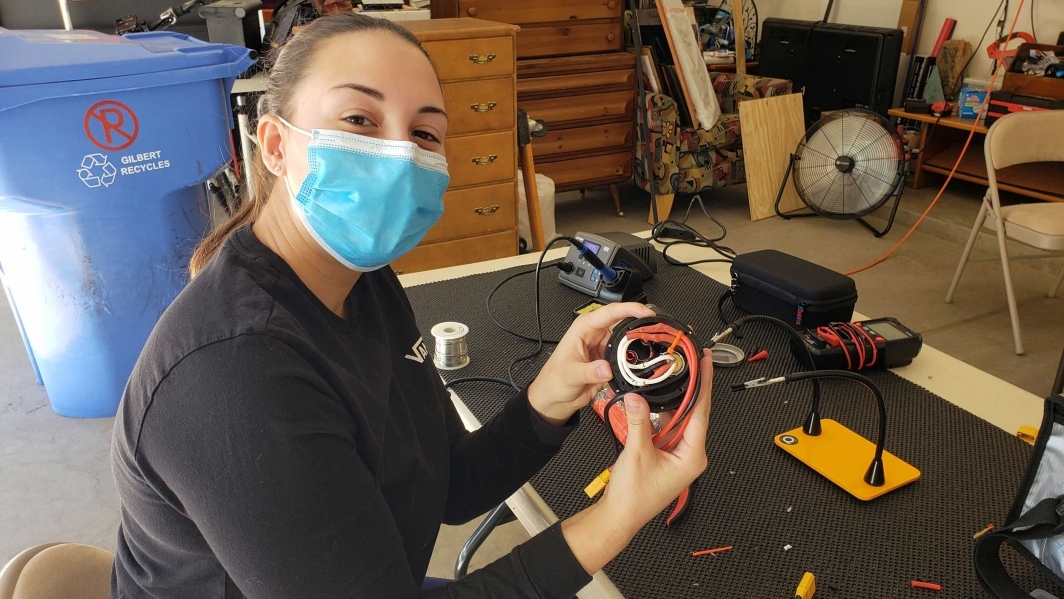 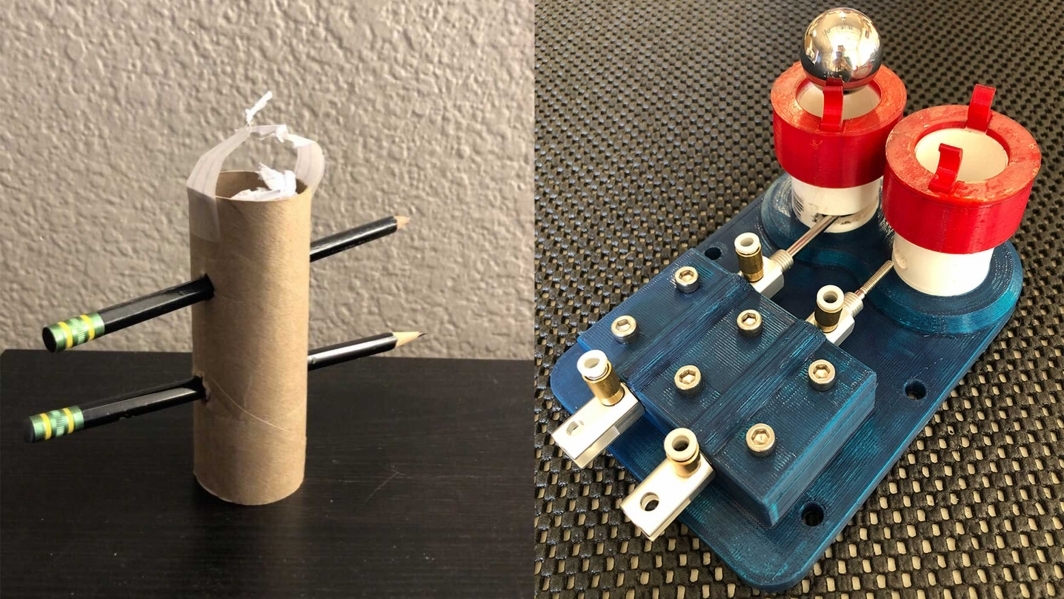 “The great thing about these new mechanisms is that they are simple, so they should be extremely reliable,” said Frank.

“When I started designing the new marker dropper, I was still fairly new to CAD so I designed a cardboard prototype first,” Roty said. “I recycled the core of a roll of paper towel and poked a couple of pencil holes to imitate the pistons and added some crumpled paper to act as the ball bearings.”

She then brought her vision to life using SolidWorks and 3D printing. With the help of teammates and mentors, the dropper had a perfect first trial run.

“This project embodied a lot of meticulous work but it was all so worth it,” Roty said.

Isabella Bushroe, who just completed her second year studying mechanical engineering systems, designed and developed the new torpedo launcher that will mount to the top of the AUV as part of her role on the mechanical team.

“We scrapped last year’s design and I started from scratch,” Bushroe said. “I got a lot of one-on-one help from Dr. Frank over Zoom, and also worked closely with Fredi, who tested the torpedo launcher in his bathtub.”

Sam Ehrle, the electrical team lead who just completed her second year studying robotics and electrical systems engineering, worked on circuit boards for a pneumatic system. The new pneumatics hull will allow the new AUV to use air to power the torpedo launcher, marker dropper and grabber. Last year’s AUV had one main hull, but the new one features several smaller hulls, allowing members to work on their own parts independently and in parallel with each other. This design is more modular and allows for easier disassembly so individual pieces can be removed and reused for future models.

“The team pushed the boundaries of their designs, even with the news that the live event was canceled, and that takes a lot of courage,” Frank said.

In the process of altering plans, adjusting goals and recalibrating workflow, the team learned to adapt, push forward and make the best of unexpected circumstances.

“Some of the excitement is gone this year, but it is still a great learning opportunity,” Lajvardi said, “and it will make us better for next year.”

Desert WAVE, the all-female underwater robotics team of Arizona State University students in the Ira A. Fulton Schools of Engineering, made a splash in San Diego this past weekend. The Women in Autonomous Vehicle Engineering team won third place in the 2019 International RoboSub Competition — a major feat for the first-time competitors.Hosted by the Office of Naval Research and RoboNation, the ...

Desert WAVE, the all-female underwater robotics team of Arizona State University students in the Ira A. Fulton Schools of Engineering, made a splash in San Diego this past weekend. The Women in Autonomous Vehicle Engineering team won third place in the 2019 International RoboSub Competition — a major feat for the first-time competitors.

Hosted by the Office of Naval Research and RoboNation, the competition tasked 55 teams from more than 12 countries with designing and building an autonomous underwater vehicle. Desert WAVE prepared for the event by meeting weekly for several months with their mentors, engineering lecturer Daniel Frank and Faridodin Lajvardi of the Si Se Puede Foundation. Together they turned the tide in their favor by building relevant industry-related skills in computer-aided design, 3D printing and teamwork. 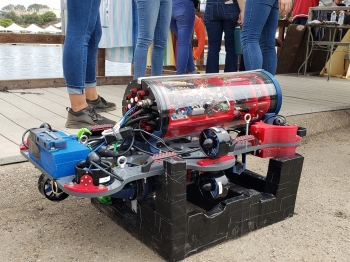 Desert WAVE was created by a partnership between The Polytechnic School, one the six Fulton Schools and Si Se Puede Foundation, a nonprofit organization dedicated to providing resources for underserved communities. Desert WAVE is also sponsored by Blue Robotics and MakerBot.

The partnership provides young women engineers with the opportunity to work together on engineering projects. Their efforts carried them to the top of the competition worldwide.

Excited about ending the competition with high marks, the team members – many of whom are freshmen – are already looking forward to competing in the RoboSub competition next year. 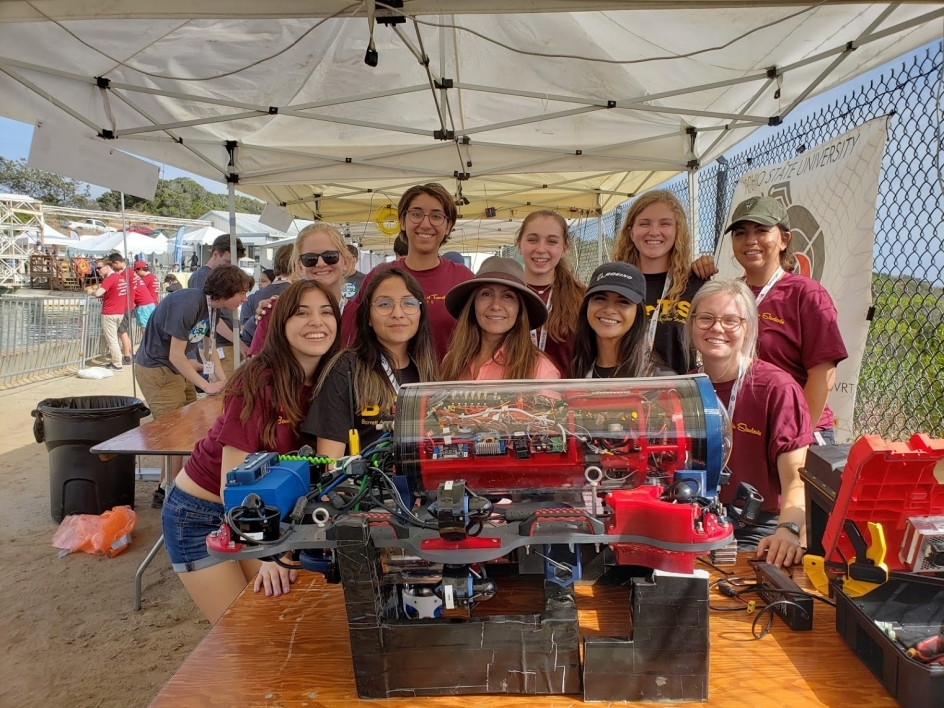 The team poses with one of their biggest sponsors and supporters, Shebbie Jacques (bottom row, center). 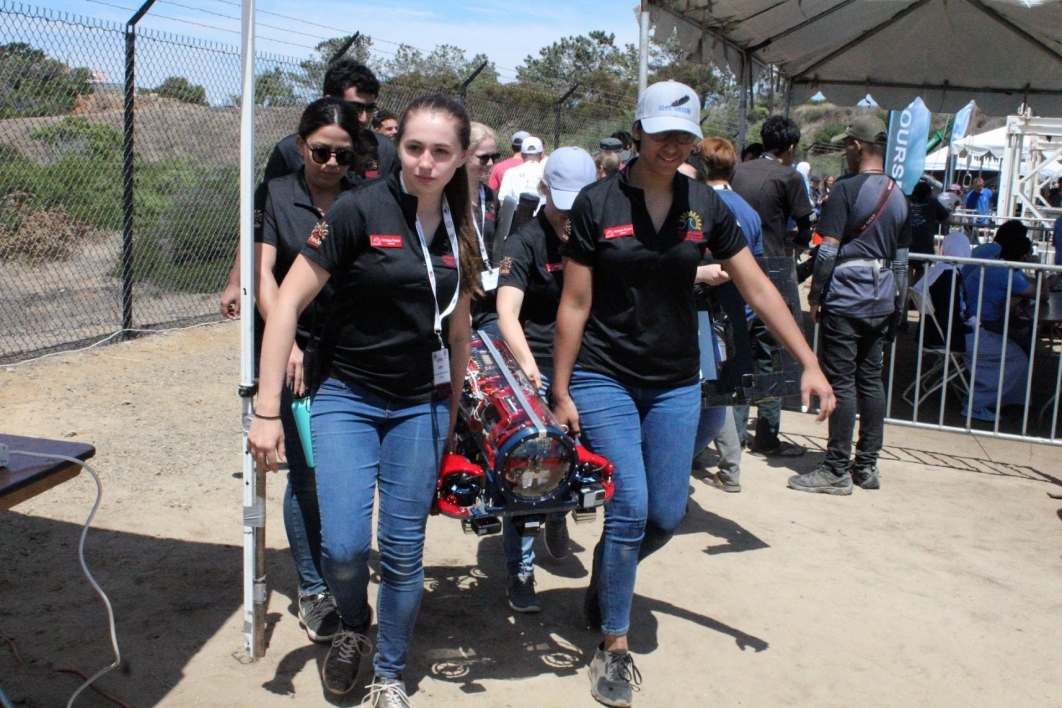 Desert WAVE students carry their AUV, Phoenix, back from the course after a run. 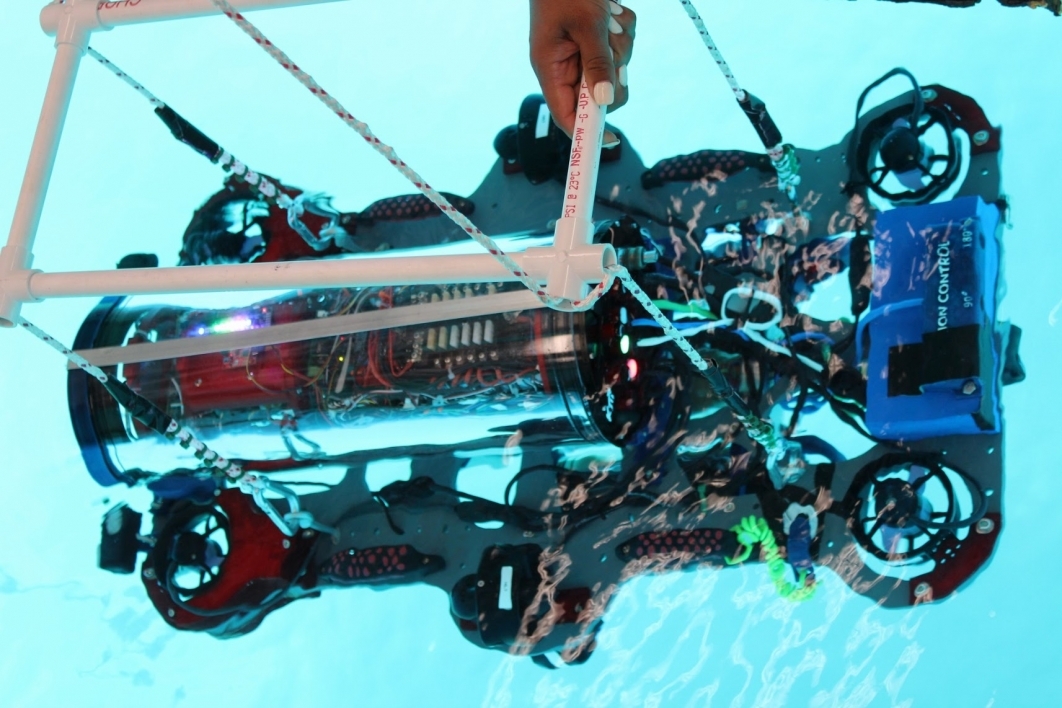 Acoustic testing at the TRANSDEC facility.