Jacobson's goal has been to attend the University of Houston College of Medicine and he was excited to learn recently that his application to their program has been successful. He will start in the program this summer. Jacobson describes his academic beginnings in 2010 as “less than stellar,” realizing he wasn’t yet ready for the demands of college. Not giving up on his dream to be in medicine, he completed paramedic school and fireman training. Being a paramedic helped teach him discipline and hone the skills necessary to pursue his dream of becoming a medical doctor.

“I needed a flexible degree program, which is why I decided to pursue my degree online,” Jacobson said.

“I called at least two dozen schools," Jacobson said, "but finding an online program that would meet all of the pre-requisites for medical school wasn’t easy. I saw an advertisement from ASU, and after speaking with School of Molecular Sciences Clinical Assistant Professor Ara Austin, I realized that science not only could be done well online, but that it was being done well at Arizona State.”

Jacobson has found ASU’s online program both challenging and rewarding, especially while working up to 65 hours per week.

“Once I set a schedule and stuck to it, things got easier,” Jacobson said.

Being able to adjust the playback speed of recorded lectures helped Jacobson make the most of his time. He sped up lectures when familiar with the material and slowed them down or replayed them when the concepts were challenging. What he found most helpful, however, were the instructors.

"When I started online school, the amount of time I was putting in was enormous,” Jacobson said. “However, when I started attending office hours the instructors helped me understand where I was struggling. I began to understand more and use my time more efficiently and effectively.”

Jacobson credits his success to many of his ASU professors.

“Professor (Ian) Gould went above and beyond in office hours. All of my teachers — Ashli Morgan, Gary Cabirac and Scott Lefler, as well as others — answered my questions and made sure I understood the concepts. The conversations I had with them, as well as with Ara Austin and Kirstin Hendrickson, went beyond the class and deeper into the subject matter.”

Looking back over his journey at ASU, Jacobson admits it hasn’t been a solo journey.

“You have to have a community of support, and I had that at ASU. My fellow students provided peer support through study groups. The professors were supportive. Most of all, my wife has been my biggest cheerleader.”

Laughing, Jacobson said, “I was so excited about what I was learning; I would drive my wife crazy talking about biochemistry.”

Jacobson’s advice for students: “Attend class, utilize office hours and have a support system. Most of all, appreciate the opportunity you have and don’t waste it.

"I consider myself fortunate to have been part of the SMS biochemistry program. I have to thank every single professor and classmate I’ve had along the way to achieving my dream.”

The fellowship is a prestigious and competitive award given by the American Council of Learned Societies. There are only around 10 winners each year. 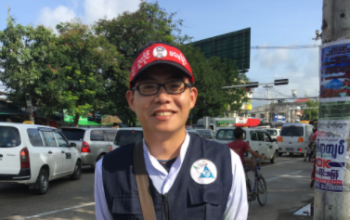 Hsu’s dissertation and research focuses on relief organizations called free funeral service societies (FFSSs) that emerged from Myanmar in the 1990s. The organizations started as a response to rising funeral costs and have grown into a nationwide grassroots effort dedicated to a variety of welfare services.

The services they provide include clinical care, education, emergency aid and disaster relief. They have even been involved in promoting public awareness of COVID-19, helping to collect donations of medical supplies to local clinics and hospitals.

Here Hsu, who is also a graduate teaching assistant in the School of Historical, Philosophical and Religious Studies and the Center for Asian Research, discusses his research and accomplishment.

Question: Can you tell me a little bit about your research and the topic of your dissertation?

Answer: In Myanmar, where almost 90% of the population are Buddhists, most FFSSs are naturally associated with Buddhist communities while only a few are affiliated with Christian, Hindu and Muslim communities. Despite their different affiliations, FFSSs throughout the country are committed to promoting the "welfare of others," "without discrimination of race and religion." My project focuses on the ways in which FFSSs and their practices are shaped by Buddhist ethical principles and soteriology, and it also looks to FFSSs as a site for emergent interfaith collaboration in social welfare provision.

Q: How long have you been working on this research topic? What got you interested in it?

A: My first time being a free funeral volunteer in Myanmar was in the summer of 2013. Growing up in Taiwan, where the "afterlife service" is a multimillion-dollar industry, I never imagined that funerals could be done for free. This brief encounter with death, with mourning and with the free funeral service was a transformative experience that showed me a culturally unique way of engaging with and alleviating others’ suffering. It has led me to commit my doctoral research to FFSSs and their welfare services. I have been conducting short-term summer field research with FFSSs every year since 2016 in order to familiarize myself with Burmese terminology, customs and practices associated with death and funeral.

I am intrigued by the shifting public opinions and attitudes toward FFSSs and their services. Over 20 years ago when the famous movie star Kyaw Thu, the current chair of Free Funeral Service Society-Yangon, started his second career in free funeral service, he found himself despised among his peers in show business for all the bad luck he might bring to others. In present-day Myanmar, Kyaw Thu is a widely revered humanitarian superstar. The free funeral service, among other social services, has become one of the popular merit-making practices foundational to the traditional Buddhist quest for merit, ethical perfection and enlightenment. “Funeral one time, monastery 10 times” — for some Burmese Buddhists, as this Burmese proverb suggests, doing the free funeral service can even be 10 times as meritorious as visiting the monastery. I am interested in how this radical social-religious change happened, and how encountering and engaging suffering allows Burmese Buddhists to experience, imagine and embody the soteriological rewards of the free funeral service.

Q: Why do you think it is important to study this topic?

A: FFSSs, among other Buddhist social and political movements, offer a lens through which to explore emergent ways in which the modern relevance of Buddhism is sought in and through reinterpretations of Buddhist practices and soteriology. In recent years Myanmar has seen the rise of Buddhist ultranationalist movements, claiming that acts in the defense of the nation and Buddhism from religious others are essential to the Buddhist quest for enlightenment and soteriological liberation. FFSSs, which are known for their commitment to promoting the "welfare of others (Pali: parahita) without discrimination of race and religion,” constitute a socially inclusive Buddhist mass movement that is ideologically distinct from the nationalist movements. They look to inclusive social services as a socially engaged path to liberation. Recent writings of Burmese Buddhism among scholars and public intellectuals have focused on the Buddhist nationalist movements. My dissertation project on FFSSs — an equally significant but less publicized Buddhist social movement dedicated to socially inclusive relief work — contributes to this scholarship a corrective to the exclusive attention to nationalism and a reframing of the central concerns in modern Buddhism in Myanmar.

Q: How did you feel when you heard the news you won the fellowship?

A: That was one of the most exciting moments of my life. My adviser Juliane Schober has once said, “the road to success is filled with failure.” I was expecting an email that started with “I regret to inform you ...” but was greeted by “Congratulations!” It goes without saying that I was exhilarated. However, I don’t see that as my own achievement. I am able to develop a fundable research project only because the School of Historical, Philosophical and Religious Studies and Center for Asian Research together have created an intellectually vibrant environment in which I have the opportunity to work with and learn from many brilliant and engaged professors and fellow graduate students, to whom I owe gratitude.

Q: How are you planning to present the research once it is completed (an article, book, conference lecture, etc.)?

A: In the past two years, I have worked with Dr. Schober to present my preliminary findings at several conferences dedicated to Theravada Buddhist and Asian studies and published an article in Journal of Burma Studies. I believe, however, what I have done is merely scratching the surface. The 10-month field research supported by the fellowship will be the basis of my dissertation, in addition to which I have planned to develop journal articles and a monograph dedicated to Buddhist welfare services and humanitarianism in contemporary Myanmar.

Q: Is there anything else you would like to add?

A: My Burmese name is Chit Minn, which means "King of Love." It was given to me based on the day of the week that I was born, which was Monday, by my first Burmese teacher, U Saw Tun, at Northern Illinois University. He actually gave me several choices and Chit Minn was a particularly unique and interesting one. I asked U Saw Tun what kind of "love" that means. Does it mean romantic love or all kinds of love? He said, at that time, that it can mean all kinds of love. In retrospect I think he was messing up with me because most of the time "chit" means romantic love, but I have zero regret and I thank him for tricking me into choosing this unique name.