Workshop applies theory of networks in breaking the coronavirus

The race is on to develop a vaccine for the coronavirus, but while we wait, can we discover smarter ways to manage the pandemic than opportunistic piecemeal intervention? That challenge was taken up by Arizona State University’s Beyond Center for Fundamental Concepts in Science in collaboration with California AIOps company Moogsoft.

They held an international virtual workshop of about 40 participants, May 28-29, titled Beyond COVID-19: Modeling Sustainable Exit Strategies. It followed the tradition of Beyond Center workshops of bringing together scientists from diverse disciplines to brainstorm foundational concepts and novel ideas at the cutting edge of research, in an informal and inclusive atmosphere. 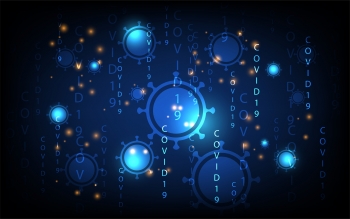 The Beyond Center had already built up its expertise in the theory of networks, which find application to systems as diverse as prebiotic chemical reactions, cancer gene regulation, ecosystems, the internet and neuroscience. A pandemic is also a network, in which the infection is passed from person to person and spreads out across the world.

The workshop focused on using insights from the other disciplines to better understand the dynamics of the pandemic and to explore the possibility of interventions that modify the network structure, rendering it more manageable.

Moogsoft’s business applies artificial intelligence to improve the stability and uptime of large computer networks by analyzing vast quantities of data accumulated from monitoring the incessant glitches that plague complex systems, and help keep us all zooming, emailing and tweeting without interruption. In the case of COVID-19, participants took the opposite track, aiming to hack a network (the virus) and render it unstable. A glitch in the pandemic network could translate into many lives saved.

Paul Davies, director of the Beyond Center, remarked that the theory of networks is an established field of research stretching across many disciplines.

“Treating COVID-19 using network theory meshes perfectly with the transdisciplinary ethos at ASU,” he said. “Although it is too late to stamp out the outbreak, we can analyze different lockdown exit strategies in terms of their human and financial cost, to be better prepared to tackle any second or third wave by smart intervention strategies.”

Building on the success of the workshop, Moogsoft and the Beyond Center are planning additional meetings and cooperation with the ASU College of Health Solutions, aiming to use the best ideas in scientific theory to make the world safer for all.

Kristin Gilger, an author, journalism leader and senior associate dean of the Walter Cronkite School of Journalism and Mass Communication, has been named the school's interim dean, effective immediately. The announcement was made by Arizona State University Executive Vice President and Provost Mark Searle, who praised Gilger’s leadership through the years and thanked her for her willingness to...

Kristin Gilger, an author, journalism leader and senior associate dean of the Walter Cronkite School of Journalism and Mass Communication, has been named the school's interim dean, effective immediately.

The announcement was made by Arizona State University Executive Vice President and Provost Mark Searle, who praised Gilger’s leadership through the years and thanked her for her willingness to lead the school during challenging times. Gilger, who has been at the center of the 15-year transformation of the Cronkite School, is known for working tirelessly on behalf of all members of Cronkite Nation.

“To say that I’m honored to be your interim dean is an understatement. The Cronkite School has been my home for the past 15 years, and I have been privileged to be part of its growth into the country’s premier program in journalism and mass communication,” Gilger said. “I want to also acknowledge how difficult the past few weeks have been for the school. But I’m convinced that not only will we recover, we will learn from this experience and we will be a better school as a result.”

Christopher Callahan, outgoing Cronkite dean and the new president of the University of the Pacific, gave his encouragement to staff and faculty in an email.

“I am beyond thrilled that Kristin, our friend, colleague, nationally renowned journalism educator and longtime senior associate dean, will be taking the leadership reins of Cronkite as interim dean,” Callahan said. “Thank you to Kristin for her selfless willingness to take on the deanship. I am supremely confident that the Cronkite School will now continue its upward trajectory unabated, led by the best journalism students, faculty, staff, alumni and supporters in the nation.”

The announcement of Gilger’s appointment was also hailed by members of the faculty and staff as a giant step in the right direction at the right time.

“Since the day you walked into Cronkite, you have improved the school, supported the faculty and put the students first,” said Professor Julia Wallace, Frank Russell Chair in the Business of Journalism. “You have a big job ahead of you, but we are here to help you in any way we can. We have some work to do!”

“Wonderful news! As someone who has known Kristin for more than 20 years through a multitude of roles — including big city editor, colleague, author, senior associate dean — I'm so glad to see this decision!” said Mi-Ai Parrish, Sue Clark-Johnson Professor in Media Innovation and Leadership, managing director and professor of practice.

“Wonderful news!!! What a great choice! We are all so grateful that you have agreed to take this on!! Congratulations!!!,” said Brett Kurland, professor of practice and director of Cronkite News Phoenix Sports Bureau.

Gilger, who is Reynolds Professor in Business Journalism, joined ASU in 2002 as director of student media, providing editorial guidance and overseeing the business operations for the university’s daily student newspaper, The State Press. Under her leadership, student media won top national awards, including the Payne Award for Ethics in Journalism, Columbia Scholastic Press Association Gold and Silver Crown awards and the EPPY Award for Best College Newspaper Internet Service.

As senior associate dean, Gilger has helped develop and lead a number of the school’s signature professional programs, including Carnegie-Knight News21, a groundbreaking initiative that brings top students from across the country to Cronkite to report on issues of national significance, and the Howard Center for Investigative Journalism, where Cronkite undergraduate and graduate students produce major regional and national investigations. She also serves as executive director of two centers — the Donald W. Reynolds National Center for Business Journalism and the National Center on Disability and Journalism — and has overseen professional programs, adjunct faculty, curriculum development and grant programs.

Gilger and her colleague Julia Wallace recently published the highly regarded book “There’s No Crying In Newsrooms: What Women Have Learned About What It Takes to Lead.” Gilger has also been at the forefront of many aspects of inclusion and diversity in her career and will bring this knowledge along with an outstanding record of journalism to her leadership role as interim dean.

Before coming to ASU, Gilger served as deputy managing editor for news at The Arizona Republic, where she led a team of more than 100 reporters and editors at the nation’s 15th largest newspaper. She also served as managing editor of The Statesman Journal newspaper in Salem, Oregon, and in various editing positions at the Times-Picayune newspaper in New Orleans. She was a reporter and editor in St. Cloud, Minnesota, and in Charleston, South Carolina, early in her career.

Gilger also conducts seminars and training sessions on newspaper management, news writing and journalism ethics for professional journalists around the world. She has led sessions for the Associated Press Managing Editors, the American Association of Sunday and Features Editors, the National Writers Workshop and the U.S. State Department.