Three new views of the Martian moon Phobos have been captured by NASA's 2001 Mars Odyssey orbiter. Taken this past winter and this spring, they capture the moon as it drifts in and out of Mars' shadow. It's eclipse season on Mars, a six-month period which occurs twice each Mars year (the equivalent of two Earth years), which provides a unique opportunity to observe Phobos.

The orbiter's infrared camera, the Thermal Emission Imaging System (THEMIS), has been used to measure temperature variations across the surface of Phobos. This camera was built and is operated at Arizona State University, led by principal investigator Philip Christensen of the School of Earth and Space Exploration. 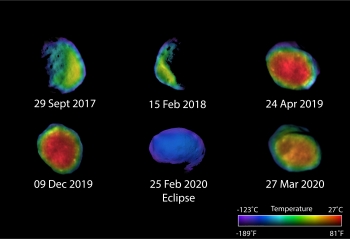 “THEMIS has significantly advanced our knowledge of Mars over its 20-year lifetime, and it is very exciting to see that it is still making new discoveries and new contributions to planetary science and exploration,” Christensen said.

The variations measured by THEMIS provide insight into the composition and physical properties of the moon. Further study could help settle a debate over whether Phobos, which is about 16 miles (25 kilometers) across, is a captured asteroid or an ancient chunk of Mars that was blasted off the surface by an impact.

Led by NASA's Jet Propulsion Laboratory in Southern California, Mars Odyssey's mission is mostly dedicated to studying the Martian surface. But in recent years, a process has been developed to flip the spacecraft upside-down so it can point its camera at Phobos.

“Taking an image of Phobos requires about six weeks to plan,” said THEMIS research analyst Jonathon Hill. “Mars Odyssey has to be flipped around to point away from Mars, take the image, and then flip back to point at Mars. During this process it is impossible for our antenna to maintain a lock on Earth, so we lose communications until the process is complete.”

Among the three new images, the one taken Dec. 9, 2019, shows Phobos in full-moon phase, when more of the surface is exposed to sunlight, with a maximum temperature of 81 degrees Fahrenheit (27 degrees Celsius). An image taken Feb. 25, 2020, shows Phobos while in eclipse, where Mars' shadow completely blocked sunlight from reaching the moon's surface. This provided some of the coldest temperatures measured on Phobos to date, with the lowest being about minus 189 degrees Fahrenheit (minus 123 degrees Celsius). On March 27, 2020, Phobos was observed exiting an eclipse, when the surface was still warming up.

All of the THEMIS infrared images are colorized to show temperature variations and are overlain on THEMIS visible images taken at the same time to show the geology of the surface. The one exception is the eclipse image, which is overlain on a computer-generated image to show what Phobos would have looked like if it wasn’t in complete shadow.

Combined with three previous images, these observations represent waxing, waning and full views of the moon. The Mars Odyssey team plans to observe crescent phases in coming months, providing a comprehensive view of how Phobos' surface warms and cools as it rotates.

"We're seeing that the surface of Phobos is relatively uniform and made up of very fine-grained materials," said Christopher Edwards of Northern Arizona University, who leads the processing and analysis of the Phobos images. "These observations are also helping to characterize the composition of Phobos. Future observations will provide a more complete picture of the temperature extremes on the moon's surface."

Mars Odyssey has been orbiting Mars since 2001. It takes thousands of images of the Martian surface each month, many of which help scientists select landing sites for future missions.

“Mars Odyssey and THEMIS teams have adapted and evolved so that we're still collecting unique data even after almost 19 years at Mars,” Hill said.

One of the sites Mars Odyssey captured pictures of is Jezero Crater, the landing site for NASA's Perseverance rover, which launches to Mars this summer and will include a camera system called Mastcam-Z, developed and operated by scientists at ASU and led by instrument principal investigator Jim Bell.

“The THEMIS data will tell us the average size of the rocks and dust on Phobos' surface, which could be helpful to the MMX mission when they are preparing to collect their samples,” Hill said.

The prime contractor for the Mars Odyssey project, Lockheed Martin Space in Denver, developed and built the orbiter. Mission operations are conducted jointly from Lockheed Martin and from JPL, a division of Caltech in Pasadena.

Flaky, crispy, paper-thin bread. Primarily made from blue corn flour, juniper tree ash and water, piki is maize flatbread and a staple of traditional Hopi cuisine.As people in what is now the southwestern U.S. went from living in small family units to larger villages and towns during the 13th and 14th centuries, women spent more time cooking more piki for more people. It is a telling example o... As people in what is now the southwestern U.S. went from living in small family units to larger villages and towns during the 13th and 14th centuries, women spent more time cooking more piki for more people. It is a telling example of the link between foodways and social transformation in the Cibola region during the time period, according to award-winning research by Arizona State University researcher Sarah Oas.

The Cibola region spans the border of Arizona and New Mexico, including the Zuni Pueblo. It underwent rapid social change at about A.D. 1275, as people moved into more densely populated communities, migrated over long distances and began adopting new ideologies and religious beliefs.

Oas’ research explored the influence of this transformation on foodways — a broad term used to describe everything related to food, including growing, storing, preparing, cooking, eating and discarding it. She also investigated how foodways themselves influenced social transformation. Her approach combined multiple methodologies, analyzing archaeological collections and integrating existing studies of the Southwest.

Her work shows how individuals experience social transformation in different ways through their relationship with food. Oas was one of only two recipients of the 2020 Society for American Archaeology Dissertation Award for outstanding contributions to archaeology. Oas is now a postdoctoral research associate at ASU’s School of Human Evolution and Social Change after completing her PhD at the school.

Associate Professor Matthew Peeples, a member of Oas’ dissertation committee, said her research demonstrated how scholars can study existing archaeological collections using a comprehensive approach. “She gathered 80 to 100 years of existing data and records and analyzed it in a way that hadn’t been done before,” he said.

Oas studied the wear of kitchen instruments and the size of jars and vessels. She assessed studies of botanical remains in domestic hearths and traces of animal husbandry. She also cross-referenced ethnographic records and historical accounts of Zuni meals and recipes.

For a contemporary perspective, Oas interviewed Zuni cooks, farmers and gardeners. She also worked on a Zuni agricultural field growing maize and beans to better understand what food production may have been like for Zuni ancestors. Oas holds a carbonized cob fragment, examining how corn was being grown and stored. The cob was excavated by the Museum of Northern Arizona from site NA 11,527, a small stone pueblo near the Pueblo of Zuni. Oas says the pueblo likely housed an extended family and was occupied between 1250 and 1275 AD. Photo courtesy of Sarah Oas, photographed with permission from the Museum of Northern Arizona.

By combining these research approaches, Oas found studying foodways provides a more comprehensive political and social view of a time period, as opposed to focusing only on economic or environmental aspects. For example, by examining food production studies alongside food serving and feasting studies, she found that ancestral Zuni communities thrived through times of social transformation.

While her research focused on the 13th and 14th centuries, Oas recognizes challenges in the modern American relationship with food. “We’ve lost a lot of our food culture,” she said. “Generally speaking, in America, the pace of life is fast. There’s a focus on work, and with that comes a loss of community and family connection through food.”

Oas continues to study foods and societies as a postdoctoral research associate at ASU. She is working with Peeples and a small team to research how food technologies change over time.