Future Tense webinar asks, 'Does a Monthly Check to All Americans Make Sense Even Without a Pandemic?'

The COVID-19 pandemic has caused policymakers us to rethink approaches to a range of issues, such as healthcare, welfare and education. Now that millions of Americans are receiving direct cash transfers as part of recently passed coronavirus stimulus packages, the potential of a universal basic income (UBI) — in which the government would provide every American with a minimum income regardless of their income or employment status — has come to the forefront of policy debate during the pandemic.

Though UBI enjoyed some notoriety during Andrew Yang’s presidential campaign, it has not been explored much as a potential policy in the U.S. prior to the pandemic. Nor has it been fully implemented in any country.

On Thursday, April 23, UBI was the central topic of conversation during “Does a Monthly Check to All Americans Make Sense Even Without a Pandemic?,” a webinar hosted by Future Tense in partnership with Slate, New America, and Arizona State University. Annie Lowrey, staff writer for The Atlantic and author of "Give People Money: How a Universal Basic Income Would End Poverty, Revolutionize Work, and Remake the World," led the webinar alongside writer and philanthropic strategist Sebastian Johnson.

“UBI isn’t really a welfare policy, it’s an insurance policy,” Lowrey explained. “It’s meant to be there as a buffer to help people through all sorts of circumstances.”

Left to right: philanthropic strategist Sebastian Johnson and Annie Lowrey, staff writer for The Atlantic and author of "Give People Money: How a Universal Basic Income Would End Poverty, Revolutionize Work, and Remake the World."

Lowrey added that one-time checks with a minimum amount of money can be helpful, but they do not give everyone the insurance they need to cover the cost of living.

Johnson added that the pandemic has revealed an urgent need for stronger secure social safety nets, and said that policymakers will need to consider how to implement financial relief policies even after the pandemic ends.

“The pandemic has really exposed the precarious nature of work and our economy that has always been there,” Johnson said. “There is a lot of essential work that is not valued by the economy, and we need to have a social way we can value this work and put a fair dollar amount on it.”

Johnson also noted that, politically, it makes sense for lawmakers to support UBI, since opinion polls indicate that most Americans — across the political spectrum — support direct cash transfers. For politicians, it will come down to whether they have the will to implement such a system.

“People understand, in this moment of crisis, that there’s going to need to be some level of solidarity and that we’re all in this together,” Johnson said. “I hope that this sentiment is part of the way in which our political conversation is changed after this crisis.”

Lowrey and Johnson acknowledged that a major challenge in implementing UBI is the commonly held belief that there are people who deserve social safety nets and those who do not  —a stigma that will be difficult to overcome.

“It’s such a core fundamental belief of how our economy is supposed to work,” Johnson said. “And I think whoever figures out how to break that belief will be our next president.”

Future Tense is a partnership of Slate, New America and Arizona State University that examines emerging technologies, public policy and society. The partnership provides insightful, timely and unexpected analysis at the intersection of technology and society through written commentary and live events in Washington, D.C. and beyond.

Unprecedented times: Experts to weigh in at 2020 Economic Outlook webinar

One of the longest-running, most in-demand forecast events in the Phoenix metropolitan area, the annual Economic Outlook Luncheon will be offered exclusively online for the first time, presented by the Economic Club of Phoenix and hosted by Arizona State University's W. P. Carey School of Business from noon to 1:30 p.m. on Tuesday, May 5.“Based on current circumstances, it was decided that ins...

Unprecedented times: Experts to weigh in at 2020 Economic Outlook webinar

3 ASU economists will discuss how COVID-19, stock market volatility and the upcoming election will shape our economic future

One of the longest-running, most in-demand forecast events in the Phoenix metropolitan area, the annual Economic Outlook Luncheon will be offered exclusively online for the first time, presented by the Economic Club of Phoenix and hosted by Arizona State University's W. P. Carey School of Business from noon to 1:30 p.m. on Tuesday, May 5.

“Based on current circumstances, it was decided that instead of canceling the event, we would host it online for ECP members,” said W. P. Carey School Dean Amy Hillman. 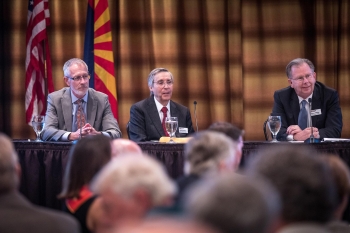 From left: Mark Stapp, Lee McPheters, and Dennis Hoffman answer questions at the Economic Club of Phoenix's annual Economic Outlook Luncheon on Thursday, May 2, 2019. The three offered views ranging from national trends to local factors in their consensus view that Arizona will continue growing, but will slow down a little in the coming year. Photo by Charlie Leight/ASU Download Full Image

Alumni relations, marketing and IT teams are pulling together the digital event for more than 150 remote guests — and growing — to be held via Zoom.

Top economic experts from ASU who are regularly interviewed in the press for their expertise in the national, state and local economy, as well as trends in commercial and residential real estate, will examine the impact of recent events and explain what's around the corner, discussing how COVID-19, stock market volatility and the upcoming election will shape our economic future.

The economists will take questions during the new interactive webinar through a Q&A session. Plus, the annual Economic Confidence Quiz will be featured during the online presentation.

Dennis Hoffman, a professor of economics and director of the Seidman Research Institute, will examine recent national trends as the U.S. deals with COVID-19 and share the factors that will influence those trends going forward.

Lee McPheters, a research professor of economics and director of the JPMorgan Chase Economic Outlook Center, will offer a first look at the year ahead for Arizona and the Phoenix metro area as the Valley deals with the myriad challenges coronavirus presents, along with an update on year-to-date performance in 2020.

Mark Stapp, Fred E. Taylor Professor in Real Estate and executive director of the Master of Real Estate Development program, will discuss how the normal approaches in the industry, such as foreclosure, eviction and locking out are not likely to work during the pandemic and could cause more damage.

“We’re hoping the webinar brings a new audience to us, people who wouldn’t have been interested in attending a luncheon but can make it for a webinar,” said Hillman, who will moderate the event. “We may get new people interested in the Economic Club of Phoenix for the next season.”

The event is complimentary for ECP members, and their membership will be extended one luncheon during the 2020–21 season, which begins this fall. Non-member registration is $50. Sign up online at wpcarey.asu.edu/economic-club.