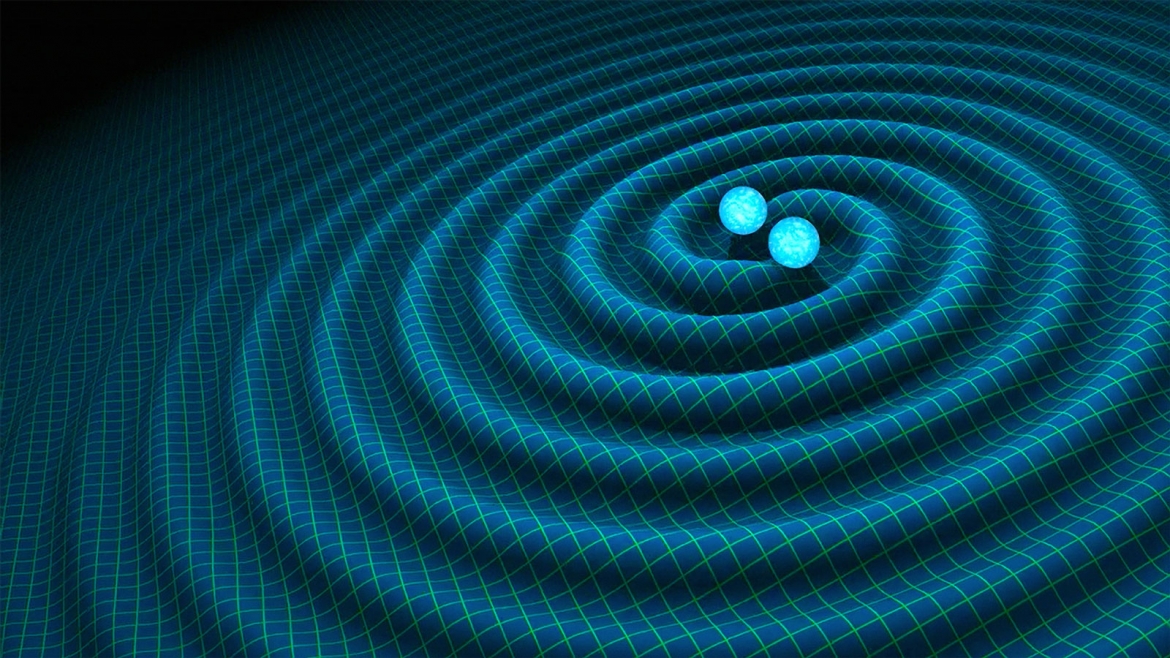 For years, physicists have pondered the existence of gravitons — microscopic particles believed to transmit the gravitational force. Observing gravitons would verify that gravity has a quantum-mechanicalThe mathematical description of the motion and interaction of atomic and subatomic particles. description. Although the existence of gravitons is widely accepted by the scientific community, finding conclusive evidence to demonstrate their existence has proven to be a challenge in fundamental physics. Now, with a recent contribution from three Arizona State University physicists, an answer to this long-standing problem may be within reach.

In their recent essay, “The Noise of Gravitons,” Associate Professor Maulik Parikh, Professor and Nobel Prize laureate Frank Wilczek and Postdoctoral Research Associate George Zahariade theorized that if gravitons exist, objects wouldn’t simply fall down under gravity, but would shake microscopically — producing a small jitter or noise. If this tiny noise could be detected, it could provide experimental evidence for the existence of gravitons.

For this significant work, Parikh, Wilczek and Zahariade were recently recognized with the top prize from the Gravity Research Foundation — one of the highest awards given for research exclusively on gravity. The Gravity Research Foundation has recognized excellence in gravity research for over 70 years, with previous winners including Stephen Hawking and five Nobel laureates. This is Parikh and Wilczek’s second time winning this prestigious award, putting them in a very small group of individuals who have won the top prize twice.

The trio worked on this project for over two years, often from different continents, but said they didn’t initially set out to delve into this complex question.

“This started with something completely different,” Zahariade said. “We were discussing how to treat a particular problem that had to do with subatomic particles called neutrinos. It didn’t have anything to do with gravitational radiation. It turned out that problem that we were looking at originally didn't lead anywhere and wasn't as promising. Then we started thinking about gravitational waves and somehow we started thinking about quantum gravitation waves. One thing led to another. It was a very weird process in some sense, but very organic in its evolution.”

They describe their approach to this issue as one that is not speculative, but instead grounded in previously existing concepts that haven’t been used to their full potential. In their essay, they note that the study of noise has historically played an important role in several major developments in physics, including the discovery of the cosmic microwave background (the afterglow of the Big Bang) and Einstein’s proof of the existence of molecules.

“The usual way that people have expected quantum gravity to manifest itself has always been through studying black holes or maybe the earliest moments of the universe just after the Big Bang,” Parikh said. “This is a very different approach that says that even here on Earth, where gravity isn't super strong, we might expect to see little jitters or a little noise coming from the fact that gravity is actually quantum-mechanical in nature.”

Although their nearly 30-page paper is still being finalized, they have already received positive feedback from the physics community on the award-winning six-page essay they submitted to the Gravity Research Foundation.

“There's a real hunger for work that brings together gravity and quantum mechanics because it's kind of a big outstanding challenge in physics to bring together these two dominant modes of thought that seem almost to exist in different universes of ideas,” Wilczek said. “I feel that this work is really good and really important. We're getting this early recognition and positive feedback that I think will help draw the attention of the physics world to this investigation.”

After receiving this top honor for their work, the group said they feel motivated to continue pursuing this question from new directions and have already begun working on follow-up projects.

Since the start of the coronavirus pandemic, life has changed dramatically. Social distancing and the stay-at-home guidelines have been especially difficult for kids. In order to thrive this summer and beyond, children need to learn new coping skills, find alternative ways to socialize with friends and discover new ways to have fun.This summer, graduate students working in Arizona State University...

Since the start of the coronavirus pandemic, life has changed dramatically. Social distancing and the stay-at-home guidelines have been especially difficult for kids. In order to thrive this summer and beyond, children need to learn new coping skills, find alternative ways to socialize with friends and discover new ways to have fun.

This summer, graduate students working in Arizona State University's Clinical Psychology Center will offer a new online summer camp to help. ASU’s Skills Program Inspiring and Reinforcing Excellence, or Camp ASPIRE for short, will use fun activities, interactive games and evidence-based approaches to teach healthy coping, social and life skills that will position students for success now and later in life. The camp begins June 15 and runs through July 24. “We know that this is a very challenging and unique time for many kids, so we decided to use our psychological expertise to help kids adapt, grow and have fun with others, while staying safe,” said Matt Meier, assistant clinical professor of psychology and associate director of clinical training.

The ASPIRE program is based on the Bridges Program, started by Nancy Gonzales, dean of natural sciences and professor of psychology. The Bridges program increases grades and confidence among teens while decreasing depressive and anxiety symptoms, discipline problems, school dropout and future alcohol use.

Camp ASPIRE provides a safe option for children and adolescents to socialize and make new friends, set positive goals for the summer and beyond, build on existing strengths and develop new coping skills such as managing negative emotions. Students can also earn prizes by actively participating and practicing new skills outside of camp.

“Our primary goal is to help kids have fun while learning new skills, but we are also hoping to help out parents. As a working parent myself, I need some structured activities for my kids this summer. I think this camp will be a big help for me and my children,” Meier said.

Camp ASPIRE will be held daily from 1 to 3 p.m. via Zoom. Groups run from Monday to Friday for one week or Monday, Wednesday and Friday for two weeks. Campers will be divided into two age groups: rising third–fifth graders and sixth-eight graders. Campers can attend a group individually or sign up with friends. The cost is $100 per student.