Class of stellar explosions found to be galactic producers of lithium

A team of researchers, led by astrophysicist Sumner Starrfield of Arizona State University, has combined theory with both observations and laboratory studies and determined that a class of stellar explosions, called classical novae, are responsible for most of the lithium in our galaxy and solar system.

The results of their study have been recently published in the Astrophysical Journal of the American Astronomical Society. 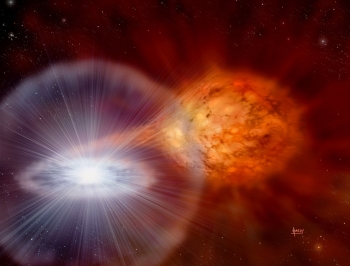 Artist’s interpretation of the explosion of a recurrent nova, RS Ophiuchi. This is a binary star in the constellation of Ophiuchus and is approximately 5,000 light-years away. It explodes roughly every 20 years when the gas flowing from the large star that falls onto the white dwarf reaches temperatures exceeding 10 million degrees. Illustration by David A. Hardy Download Full Image

“Given the importance of lithium to common uses like heat-resistant glass and ceramics, lithium batteries and lithium-ion batteries, and mood altering chemicals; it is nice to know where this element comes from,” said Starrfield, who is a Regents Professor with ASU’s School of Earth and Space Exploration and a Fellow of the American Astronomical Society. “And improving our understanding of the sources of the elements out of which our bodies and the solar system are made is important.”

The team has gone on to determine that a fraction of these classical novae will evolve until they explode as supernovae of type Ia. These exploding stars become brighter than a galaxy and can be discovered at very large distances in the universe.

As such, they are being used to study the evolution of the universe and were the supernovae used in the mid-1990s to discover dark energy, which is causing the expansion of the universe to accelerate. They also produce much of the iron in the galaxy and solar system, an important constituent of our red blood cells, which carry oxygen throughout the body.

The formation of the universe, commonly referred to as the “Big Bang,” primarily formed the elements hydrogen, helium and a little lithium. All the other chemical elements, including the majority of lithium, are formed in stars.

Classical novae are a class of stars consisting of a white dwarf (a stellar remnant with the mass of the sun but the size of Earth) and a larger star in close orbit around the white dwarf.

Gas falls from the larger star onto the white dwarf, and when enough gas has accumulated on the white dwarf, an explosion, or nova, occurs. There are about 50 explosions per year in our galaxy and the brightest ones in the night sky are observed by astronomers worldwide.

Several methods were used by the authors in this study to determine the amount of lithium produced in a nova explosion. They combined computer predictions of how lithium is created by the explosion, how the gas is ejected and what its total chemical composition should be, along with telescope observations of the ejected gas, to actually measure the composition.

Starrfield used his computer codes to simulate the explosions and worked with co-author and American Astronomical Fellow Charles E. Woodward of the University of Minnesota and co-author Mark Wagner of the Large Binocular Telescope Observatory in Tucson and Ohio State to obtain data on nova explosions using ground-based telescopes, orbiting telescopes and the Boeing 747 NASA observatory called SOFIA.

Co-authors and nuclear astrophysicists Christian Iliadis of the University of North Carolina at Chapel Hill and W. Raphael Hix of the Oak Ridge National Laboratory and University of Tennessee, Knoxville provided insight into the nuclear reactions within stars that were essential to solving the differential equations needed for this study.

“Our ability to model where stars get their energy depends on understanding nuclear fusion where light nuclei are fused to heavier nuclei and release energy,” Starrfield said. “We needed to know under what stellar conditions we can expect the nuclei to interact and what the products of their interaction are.”

“Our past studies have indicated that a small fraction of stardust in meteorites formed in novae,” Bose said. “So the valuable input from that work was that nova outbursts contributed to the molecular cloud that formed our solar system.” Bose further states that their research is predicting very specific compositions of stardust grains that form in nova outbursts and have remained unchanged since they were formed.

“This is ongoing research in both theory and observations,” Starrfield said. “While we continue to work on theories, we’re looking forward to when we can use NASA’s James Webb Space Telescope and the Nancy Grace Roman Telescope to observe novae and learn more about the origins of our universe.”

What happens in the hippocampus even before people attempt to form memories impacts whether they remember.A new study analyzed neuronal recordings from the brains of epilepsy patients while they committed a series of words to memory. When the firing rates of hippocampal neurons were already high before the patients saw a word, they were more successful in encoding that word and remembering it late...

What happens in the hippocampus even before people attempt to form memories impacts whether they remember.

A new study analyzed neuronal recordings from the brains of epilepsy patients while they committed a series of words to memory. When the firing rates of hippocampal neurons were already high before the patients saw a word, they were more successful in encoding that word and remembering it later. But when hippocampal neurons were not already spiking very much, novel information was more likely to be poorly encoded and later forgotten. 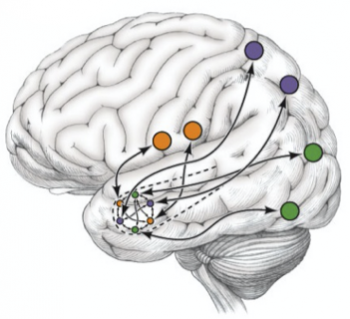 The findings suggest that the gumball-sized hippocampus might have a “ready-to-encode” mode that facilitates remembering. The study was published in the June 1 issue of the Proceedings of the National Academy of Sciences.

“We think new memories are created by sparse collections of active neurons, and these neurons get bundled together into a memory. This work suggests that when a lot of neurons are already firing at high levels, the neuronal selection process during memory formation works better,” said Stephen Goldinger, professor of psychology at Arizona State University.

Neuronal recordings from the hippocampus, amygdala, anterior cingulate and prefrontal cortex were collected from 34 epilepsy patients while they underwent clinical monitoring at Barrow Neurological Institute. During the experiments, the patients either saw or listened to a steady stream of words and had to indicate whether each word was novel or a repeat. At first, all the words were novel, but after a while most words repeated.

The researchers calculated the average number of times a neuron fired in response to every word the study participants saw or heard. They also calculated the neuronal firing rates immediately preceding each word. Only the average firing rate in the hippocampus approximately one second before seeing or hearing a word for the first time was important: That neuronal activity predicted whether the participants remembered or forgot the word when it was repeated later on.

“If a person’s hippocampal neurons were already firing above baseline when they saw or heard a word, their brain was more likely to successfully remember that word later,” Goldinger said.

The neuronal activity measured in the amygdala, anterior cingulate and prefrontal cortex did not predict task performance.

“A key question going forward is how to put our brains into ‘encoding mode’ when we wish to do so,” said John Wixted, professor of psychology at the University of California, San Diego, and one of the lead authors on the paper. “‘Encoding mode’ is more than simply paying attention to the task at hand. It is paying attention to encoding, which selectively ramps up activity in the part of the brain that is the most important for making new memories: the hippocampus. Since we know, based on earlier research, that people can actively suppress memory formation, it might be possible for people to get their hippocampus ready to encode as well. But how one might go about doing that, we just don’t know yet.”

Zhisen Urgolites from UC San Diego was first author on the paper, and Peter Steinmetz of the Neurtex Brain Research Institute, was senior author. David Treiman of Barrow Neurological Institute and Larry Squire of the Veterans Affairs Medical Center in San Diego and UC San Diego also contributed to the work.