In the National Jurist’s Spring 2020 issue of preLaw, ASU Law's home — the Beus Center for Law and Society on the Downtown Phoenix campus — was named the No. 2 “Best Law School Building” in the nation.

Securing the other top spots were the University of Memphis at No. 1 and Stetson University at No. 3. This was the first time ASU Law's home was nominated. 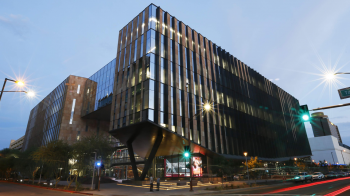 The Beus Center for Law and Society, home to ASU Law, was named the No. 2 “Best Law School Building” in the nation. Download Full Image

The building accomodates about 300 events a year by outside organizations, bringing in judges, attorneys and politicians, which helped place it as No. 2 in preLaw’s biannual list of Best Law School Buildings.

According to the preLaw article, the school’s Great Hall has a massive, 40-foot-by-60-foot glass wall with a folding glass door that unifies indoor and outdoor space and allows the hall to act as the public’s legal living room. A retractable seating system allows the Great Hall to be converted into a more formal auditorium configuration.

"This is a special place that is accomplishing things that few others have been able to accomplish,” Sylvester said. 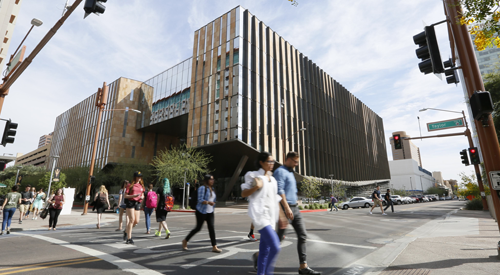 The six-story, 280,000-square-foot, state-of-the-art Beus Center for Law and Society was conceived and developed with openness to the public in mind, as a unique urban environment where society and the study and practice of law converge. 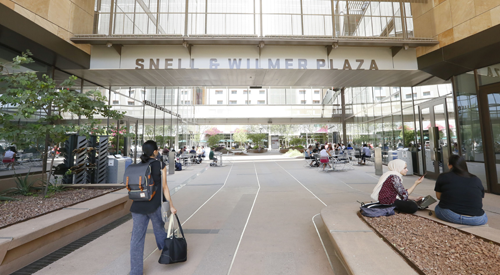 The Snell & Wilmer Plaza creates an inviting, engaging, and accessible pathway for people to connect. Also known as the Canyon, the site opens to Taylor Mall at the heart of the ASU Downtown Phoenix campus. The area is evocative of sandbars in a canyon floor as a café and lobby spill open to lush planters and seating areas with platforms for events. 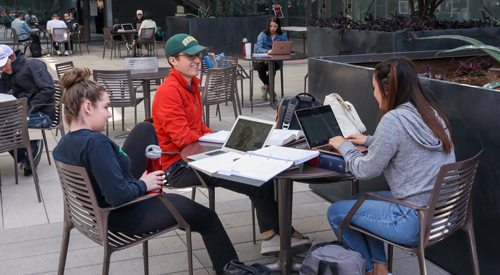 The Beus Center for Law and Society offers many places for students to connect, study and socialize. The fifth floor “green” courtyard features a balance of event space flanked with trees in raised planters, a community table and both fixed and moveable seating. 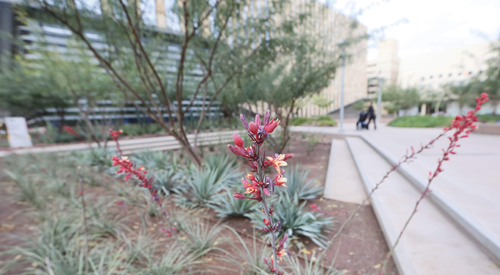 The landscape respects and celebrates the regional character of the Sonoran Desert.  The south end of the plaza highlights a lush, sunken garden naturally irrigated by surface run-off to support vegetation and contribute to recharging the local aquifer. 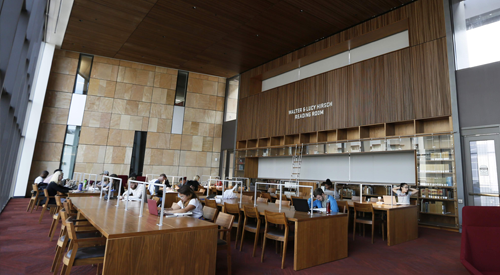 The law library and reading room are unconventionally configured to be without borders or thresholds: stacks and study spaces extend to the upper levels along all circulation paths, promoting informal intellectual and social interchange between students, faculty and visitors. 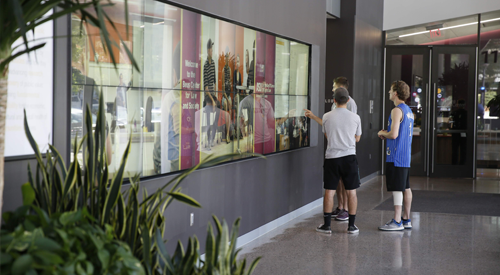 The building features technology to help people navigate the building and nearby areas, learn more about the law school and other occupants, and to keep a pulse on trending legal topics and events. Central to that task is a Nano Display facing Taylor and First streets, seen here with students as they navigate the building. 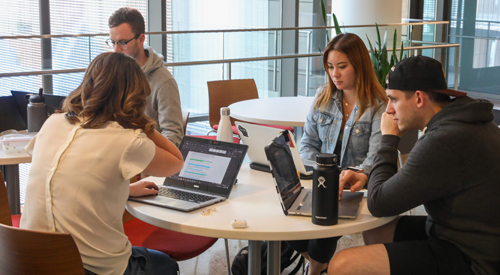 The Beus Center for Law and Society offers several areas for students to study and socialize, including a coffee shop and sixth-floor student lounge and lobby, pictured here. 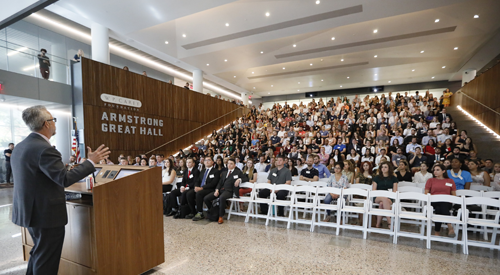 The W. P. Carey Foundation Armstrong Great Hall unifies the indoor and outdoor space and allows the hall to act as the public’s legal living room. An innovative retractable tiered seating system allows the space to be converted from a socially dynamic arrangement to a more formal auditorium configuration, providing flexibility while offering a unique space to the downtown Phoenix community. 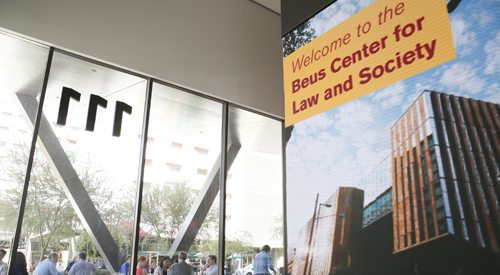 The Beus Center for Law and Society, home to ASU Law, was named the No. 2 “Best Law School Building” in the nation.

The Beus Center for Law and Society also received Leadership in Energy and Environmental Design (LEED) Gold certification in May, four years after building completion.

Gold certifications are given to buildings that score between 60-79 points. The center received a score of 61 due to the following sustainable and energy efficient features:

The National Center on Disability and Journalism at the Walter Cronkite School of Journalism and Mass Communication at Arizona State University has launched a campaign to encourage news coverage of people with disabilities in the run-up to the 30th anniversary of the Americans with Disabilities Act.The campaign consists of 30 story suggestions for journalists to consider that call attention to the...

The National Center on Disability and Journalism at the Walter Cronkite School of Journalism and Mass Communication at Arizona State University has launched a campaign to encourage news coverage of people with disabilities in the run-up to the 30th anniversary of the Americans with Disabilities Act.

The campaign consists of 30 story suggestions for journalists to consider that call attention to the changes brought about by passage of the ADA and the challenges that remain. The story ideas range from how disability communities are affected by COVID-19 to how changes in technology have transformed the lives of many living with disabilities. The campaign encourages news coverage of people with disabilities in the run-up to the 30th anniversary of the Americans with Disabilities Act. Download Full Image

A story suggestion is being released on Twitter (#NCDJ30for30) and Facebook (@ASUNCDJ) every other day through July 26, the anniversary of the ADA. They also will be archived on the NCDJ website.

“We’re hoping this campaign sparks more coverage of people with disabilities and disability issues,” said NCDJ Executive Director Kristin Gilger, senior associate dean at the Cronkite School. “People with disabilities make up nearly 20% of the U.S. population, yet their stories are often overlooked. The 30th anniversary of the ADA is the perfect time to rebalance that equation.”

The ideas were drawn from studies and published articles as well as suggestions from members of the NCDJ advisory board, which consists of journalists, scholars and members of the disability community. Cronkite graduate student Molly Duerig compiled the information and created the campaign.

The landmark civil rights legislation prohibits discrimination against people with disabilities in employment, transportation, public accommodations, communications and access to state and local government programs and services. It defines a disability as “a physical or mental impairment that substantially limits one or more of the major life activities.”

The NCDJ has been part of the Cronkite School since 2008. The organization provides support and guidance for journalists as they cover disabilities through the publication of a popular disability language style guide, lists of resources and experts and training materials. It also manages a journalism contest that recognizes the best disability reporting in the country each year.