Tropical forests contain some of the most biodiverse and dynamic ecosystems in the world. Environmental conditions such as precipitation, temperature and soils shape the biota of the landscape. This influence is especially noticeable when comparing the towering trees found in low-elevation forests to the hardier, shorter ones found at the top of tropical mountains. Together, these factors create an ever-changing and heterogeneous ecosystem, with each niche harboring different species of uniquely adapted trees.

Scientists have sought to understand the links between geology (the rock types that soils originate from), biogeochemistry (feedbacks between environmental conditions, nutrient cycling and plants), biodiversity (the variety of life in an ecosystem) and biogeography (how trees are distributed across a landscape) to paint a more complete picture of how life coevolved with our planet. Now, in a new study published Wednesday in Ecology Letters, researchers from Stanford University and Arizona State University used maps of leaf chemistry, high-resolution topography data and computer models to reveal new insights into the processes governing these complex interactions. 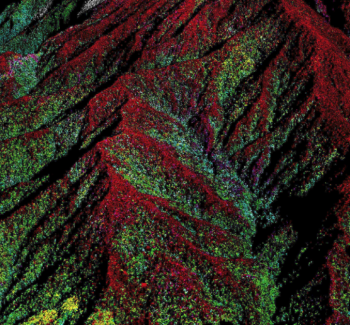 “We wanted to explore how long-term processes that shape the Earth’s surface also act to control the organization of ecosystems across landscapes," said Dana Chadwick, lead author of the study. "Understanding these organizing processes requires the integration of concepts from across disciplines. The purpose of this study was to combine high-resolution airborne remote sensing datasets that contain information on both ecosystems and the morphology of landscapes to understand how the two are interrelated on this iconic tropical mountain."

The study analyzed data from Mount Kinabalu in Malaysian Borneo, a 4,095-meter high mountain harboring a wide diversity of trees across topographically varied terrain. As tropical rains drench the mountain’s surface, elevation differences between its shallow slopes and steep peaks create imbalances in soil erosion rates — generally, the steeper the hill, the faster the rain rushes down its surface, taking soil with it. Soils carry nutrients needed by plants to grow, and erosion contributes to the distribution of these plant-required nutrients. Some areas become nutrient-rich and others become nutrient-poor, influencing the kinds of trees that can grow there. Adding to this dynamic process, some soil types are more or less prone to erosion than others depending upon their geological origins, and can also contain more nutrients plants need than others.

To overcome limitations of previous studies conducted in tropical mountains at a local scale, the researchers used maps created by ASU’s Global Airborne Observatory to collect large-scale data across 32 watersheds and at elevations ranging from 700 meters to 2,800 meters. The maps included the concentrations of nutrients in the tropical forest canopy as well as the structure and architecture of the trees. This provided the researchers an unprecedented look at the forests of Mount Kinabalu and its remote complex terrain.

“Although we originally deployed our airborne observatory to Borneo for conservation impact, such as the new protected area now under development, the opportunity to discover all-new patterns of biodiversity also presented itself in ultraremote areas like Mount Kinabalu,” said Greg Asner, author of the study and director of ASU’s Center for Global Discovery and Conservation Science.

The chemical maps revealed that leaves from trees contained different amounts of nutrients depending upon both the elevation and geology of its environment. Along hillslopes, from ridge to valley, trees contain more nutrients while their ability to capture and utilize sunlight also increases. The researchers found that this trend was significantly impacted by changing erosion rates, highlighting the important role erosion plays in distributing fresh nutrients to the soil.

“The discovery of such strong and beautifully complex geologic control on forest composition gives us new insight into the fundamental makeup of Bornean forests, in ways that inspire even more exploration,” Asner added.

Although in-person award shows have been put on hold for the time being, that didn’t stop the sixth annual ASU Gammage High School Musical Theatre Awards (HSMTA) from taking the virtual stage on Saturday, May 23. The online event recognized and celebrated Valley high school students and faculty that produced musical theater programs for the 2019-2020 school year.Desiree Ong, educational enrichme...

Although in-person award shows have been put on hold for the time being, that didn’t stop the sixth annual ASU Gammage High School Musical Theatre Awards (HSMTA) from taking the virtual stage on Saturday, May 23. The online event recognized and celebrated Valley high school students and faculty that produced musical theater programs for the 2019-2020 school year. 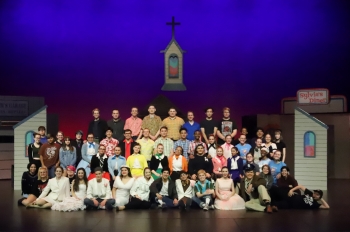 “The class of 2020 has had such a difficult year, and with other ceremonies and events getting canceled, we still wanted to hold our celebration, even if it meant going online,” Ong said. “We want to send a message that the arts are important and valued in our community, and we want to encourage students to pursue their passion and continue their lifelong love of the performing arts.”

Last fall, 24 Valley high schools were chosen through an application process. Of the 24 schools, 15 were able to finish their productions before statewide school closures.

The first half of the ASU Gammage HSMTA Virtual Showcase featured short video performances from the 24 schools. Winners were announced in 14 categories, selected by a panel of adjudicators comprised of theater professionals, teachers and enthusiasts in Arizona.

Normally, the two winners would go on to compete in the national HSMTA (known as the Jimmy Awards) in New York City. Unfortunately, the 2020 Jimmy Awards were canceled. Instead, this year’s winners each received $500 due to the generosity of ASU Gammage VIP patrons Pat Langlin-Brazil and Ronald J. Harten.

The ASU Gammage Leadership Award is normally presented to two graduating seniors for their leadership not only on the stage, but in their community and school. This year, four graduating seniors were chosen and granted $500 to use toward furthering their education: Macey Clausen from Casteel High School, Aunah Johnson from Shadow Mountain High School, Jordan Wiener from Arizona School for the Arts and Luke Morton from Williams Field High School.

“It’s been a really difficult year for everyone, and we want you to know at ASU Gammage, we are here to support you, and we look forward to you all returning to the theater,” said Colleen Jennings-Roggensack, executive director of ASU Gammage and ASU vice president for cultural affairs, in a closing statement on the night of the ceremony. “We look forward to the time when we all can be together.”

Going out with a 'bang'

Growing up in an athletic-centered household, the only time HSMTA lead male winner Brach Drew heard the phrase, “It’s showtime,” was in regard to game day. However, all that changed when Drew auditioned and got into his first play in the fourth grade. After having to do his first quick change in the school’s restroom and making it back to the stage in time to meet the expressions of audience members, he knew the connection he had made with them was something special.

Since then, Drew has been in musical after musical. A native to Tempe, Arizona, his Christmas present for the past three years has been season tickets to ASU Gammage. 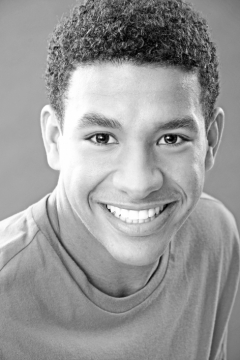 Like so many other performers, Drew didn’t realize Marcos De Niza High School’s production of “Seussical” would be the last he performed in before statewide school closures.

“We went out with a bang, and I’m really grateful for that,” Drew said.

On the night of the HSMTA ceremony, Drew sat huddled with his family in the living room and kept a Zoom call open with his fellow cast members. When he heard his name called for best lead male, Drew felt relieved.

“I put in so much work the past four years of high school developing my craft, and it paid off with receiving this recognition,” he said.

Drew remembers that when he was a freshman, his fellow Marcos de Niza actor Briana Fleming won the 2017 best lead female award. He got to congratulate her and the two took a picture together. It was in that moment that Drew decided he would work hard and do whatever it took to get there — and get there he has done.

To his theater director Patrick McChesney, saying “thank you” hardly feels like enough, he said.

“Know that everything I’m doing is to show gratitude for what you gave me — all the time, the energy, the sacrifices you’ve made for my growth. I will not take these things for granted, and I will live my life and perform, because it’s you I give credit to,” Drew said.

Being heavily involved in high school, Drew said he hopes young adults will take advantage of their time and enjoy the fullness of their high school experience because it could change in an instant.

“The idea of being yourself is excruciatingly important in musical theater, performance and life,” he said.

Drew will be majoring in theater arts at the University of Arizona in the fall. With the funds awarded, he hopes to use it to pay for materials needed in his theater classes. He also is interested in pursuing a minor in Spanish or American Sign Language to become an interpreter.

HSMTA lead female winner Angelica Santana’s theater journey started her freshman year at Dobson High School. Her school was putting on a production of “The Little Mermaid,” but her cross-country practices interfered with her getting the chance to audition. Her sophomore year, a group of friends and her boyfriend encouraged her to audition for “Thoroughly Modern Millie.” Santana initially thought she hadn’t made it in due to another student with the same first name getting cast. After a conversation with her theater director Simon Navarro, however, she realized she had gotten a role in the ensemble.

“I used to have the biggest stage fright, but after performing in that show, all of that went away and I just wanted to get better so I could get a bigger role in the future,” she said. 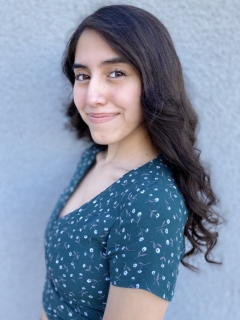 After much hard work and dedication, Santana landed the role of Nina in her school’s production of “In the Heights.” Although the school never got to perform the show, Santana was still able to create a video submission for the HSMTA ceremony of her singing “Breathe.”

Santana watched the awards ceremony in her living room with her boyfriend and younger sister. When it was announced that she had won best lead female, she felt as if she’d stopped breathing.

“My jaw just dropped, my hands went over my face and I just started crying,” Santana said. “It was such a surreal moment and felt like the cherry on top; it was sad that we didn’t get to perform our show, but I was super excited that I had won.”

Santana said her choir director Whitney Murray made her into the singer that she is today, and Navarro supported her to get her to a higher place each year. At the end of the day, she said that’s all she could ask for.

Santana will be majoring in social work at Arizona State University’s West campus in the fall. She hopes to continue theater in some capacity during college, whether that be in a club or community production.

“Theater holds such a special place in my heart — with all of the friends and people that I’ve met through it,” she said. “It’s just a big part of my life now.”