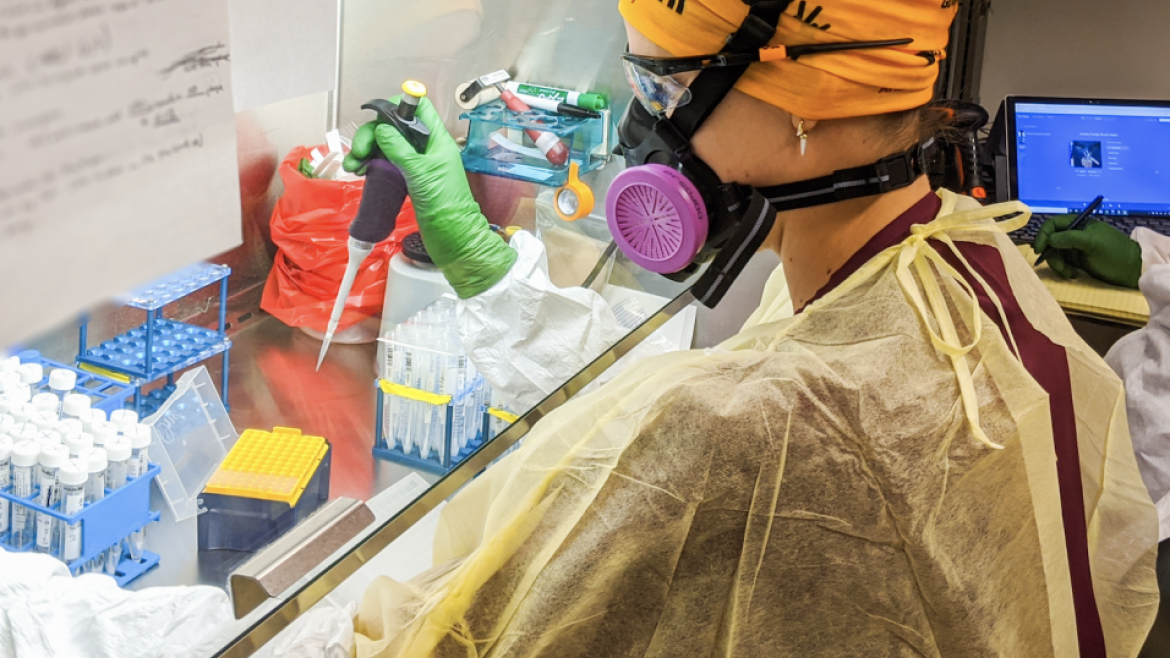 Simplicity of new test kits make supply chain easier to maintain, but could also help bring the cost of testing down 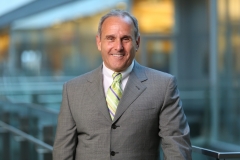 “This new saliva-based test will be a real game-changer for those individuals who want to know whether or not they have an active COVID-19 infection,” said ASU Biodesign Institute Executive Director Joshua LaBaer, who leads ASU COVID-19 research efforts. “As we return to the workplace, schools and other daily activities, testing early and often is going to be the best way to help us prevent the spread of COVID-19.”

Diagnostic tests detect an active COVID-19 infection by measuring the amount of virus present in the body. Because it can take as long as eight to nine days for an individual to develop symptoms after infection, a diagnostic test is the only test that can accurately detect an early infection. But individuals with early infections can still spread the virus.

The saliva diagnostic test starts with a collection kit that is as simple as spitting into a screw-top tube through a straw, making collections possible at drive-thru sites, doctors' offices, the workplace, and even at home. This will not only make the supply chain of test kits easier to maintain, but could also help bring the cost of testing down.

“One of the bottlenecks with diagnostic testing has been the ability to quickly obtain samples,” LaBaer said. “Even with a highly-trained medical staff, medical providers have been limited to an average of 100 people with the nasopharyngeal (NP) swab collection in a four-hour window of drive-thru testing. The goal of the saliva tests was to overcome these obstacles.”

For the past couple of weeks, ASU’s Biodesign Institute has been pilot testing the saliva-based testing with its first responder partnership network. This was performed alongside nasal swab collections samples to validate, as well as reconfigure its high-throughput robotic instruments, which currently have enough capacity to perform 1,200 diagnostic tests per day. 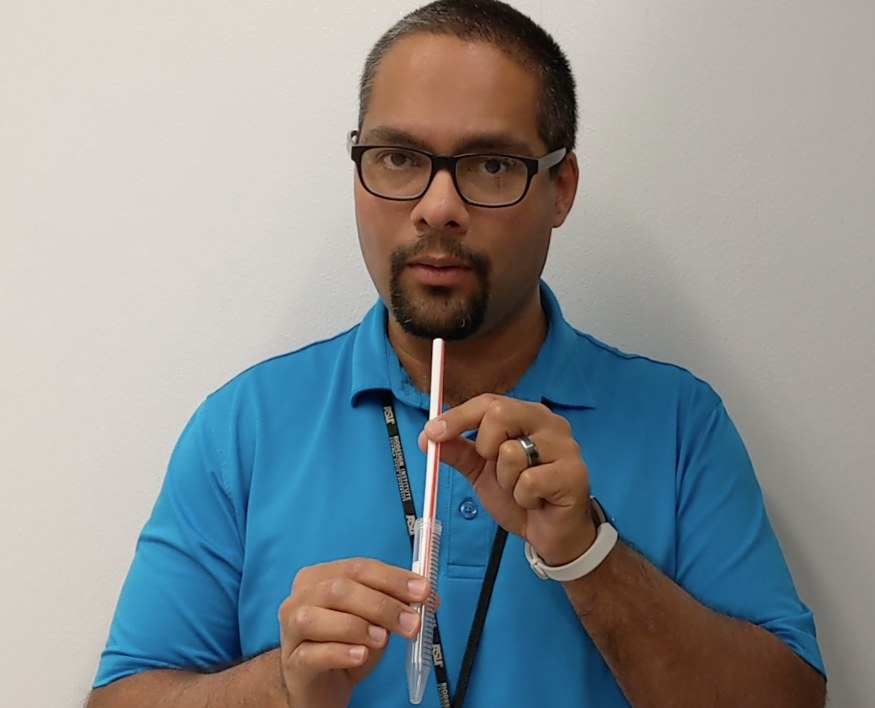 For the past couple of weeks, ASU has been validating the saliva-based testing with its first responder partnership network. This was performed alongside nasal swab collections samples to validate, as well as reconfigure its high-throughput robotic instruments, which currently have enough capacity to perform 1,200 diagnostic tests per day.

“From those results, we found that the saliva-based tests were just as good, if not even better, as those collected from NP swabs,” LaBaer said.

LaBaer points out that saliva tests offer several benefits over the NP swab tests while providing the same accuracy and sensitivity, including:

• Accuracy: The Biodesign saliva test uses the same diagnostic qPCR assay as the NP swab tests and are 100% accurate if there is any detectable amount of virus present in the sample. Research shows that saliva tests are as just as sensitive as NP swabs for detecting SARS-CoV-2 infections. One study suggests that saliva tests may offer even greater sensitivity.

• Safety: NP swab tests pose a risk to health care workers because they can make people sneeze or cough. Saliva tests can be self-administered and require minimal interaction with test site staff.

• Less invasive: NP swab tests can be invasive and uncomfortable, reducing compliance for repeat testing. Saliva tests are minimally invasive and thus easier to gather a sample from participants.

ASU’s Biodesign Institute will pivot its current diagnostic testing of first responders to switch its entire NP swab collection protocols for the new saliva-based kits. The Biodesign Institute has also applied for FDA Emergency Use Authorization for the test and will make its protocols readily available for other commercial and academic partners so they can adapt their instruments to perform saliva-testing.

“The goal is to rapidly increase statewide diagnostic testing to continue to protect first responders, get more Arizonans back to work, and students back to school again this fall,” LaBaer said. “Ultimately, we are going to need to continue the testing blitz underway and quickly ‘test, trace and isolate’ individuals to get society back up and running.”

Top photo: Diagnostic tests, like the ones performed at the ASU Biodesign Institute's Clinical Testing Lab, detect an active COVID-19 infection by measuring the amount of virus present in the body. Photo courtesy ASU.

Edson College alumnus stands out for all the right reasons

Realizing dreams is something Graham Sawicki has become an expert at. When the Edson College of Nursing and Health Innovation alumnus decided to pursue nursing he did so with gusto.Sawicki methodically worked his way up the health care ladder, starting out as a nursing assistant and then becoming a registered nurse. His most recent accomplishment? Earning a Family Nurse Practitioner, DNP.“This p...

Edson College alumnus stands out for all the right reasons

Realizing dreams is something Graham Sawicki has become an expert at. When the Edson College of Nursing and Health Innovation alumnus decided to pursue nursing he did so with gusto.

Sawicki methodically worked his way up the health care ladder, starting out as a nursing assistant and then becoming a registered nurse. His most recent accomplishment? Earning a Family Nurse Practitioner, DNP. 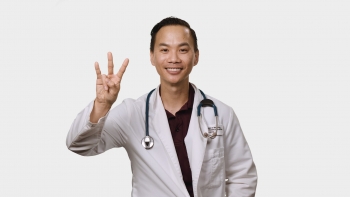 “This program helped me build my confidence in my ability to be a provider and reassured me that I can do this,” said Sawicki.

Despite his status now as an expert dream achiever, how he got here was not exactly the stuff of fairytales.

Sawicki’s interest in nursing was first piqued as a pre-teen. He was diagnosed with cancer when he was just 13 and ended up spending a lot of time in the hospital. It’s not a place any kid wants to be.

While he didn’t know it back then, those visits and stays planted a seed for his career today.

“The nursing staff made a significant impact in my life, always making me laugh and just feel like a kid, rather than a patient,” he said.

Eventually, he went into remission but that wouldn’t be the last time cancer wreaked havoc on his family. A few years later, Sawicki’s mom, who was a nurse, died from the disease.

After losing his mom he realized one of the best ways he could honor her was by following in her footsteps and becoming a nurse.

“I suppose that was a great gift she left me with, direction and a sense of purpose.”

Those personal experiences were the catalyst that helped Sawicki decide on nursing as a profession to pursue and in doing so, he found himself standing out. In the beginning, his literal presence was enough to draw attention.

As one of just a handful of men in both his classes and in his various health roles over the years, he attracted a lot of questions and assumptions.

“Going in as a male nursing assistant, I noticed my patients always asked if I was going to be a doctor after this, even though they could tell that I loved my job. And I was always like, maybe but my plan is to go into nursing.”

Then, when he became an RN, he says there were several occasions where patients or family members assumed he was the doctor on the team, even though he was clearly dressed in nursing scrubs and introduced himself as a nurse.

For his part, Sawicki isn’t surprised by the fact that he attracts interest and believes most people are well-intentioned. After all, the societal norm is that nursing is a female-led industry and it is often categorized as a feminine career.

“People seem to think nursing and caring for others is strictly a maternal or female thing,” he said. “I’ve always been pretty progressive in my way of thinking and universally I just want to help people. In nursing, I have the best opportunity to do that.”

He’s perfectly happy smashing stereotypes and providing excellent care along the way.  And, as his career went on, he found himself living his dream, working as a pediatric oncology nurse.

“I hadn’t made a plan for after that, honestly that old adage ‘if you love what you do you never work a day in your life’ is totally true and that’s where I was at,” he said.

Still, he knew he could do more for his patients. That’s when he found Edson College’s Family Nurse Practitioner, Doctor of Nursing Practice program, and decided to enroll.

“The DNP I earned here, truly makes me feel empowered and I’m eternally grateful to all of the staff and instructors who made this dream a reality.”

With all of the knowledge and experience he’s gained he’s put it to good use, advocating for his patients, community and his alma mater.

Throughout his time at Edson College, Sawicki was an active volunteer and he continues that now as an alumnus. He is a member of the college’s recently established alumni board and pre-pandemic he was a fixture at every event from Homecoming to Open Door.

In the video below, he shares more about what motivates him to volunteer and stay engaged with Edson College.