Murals of Phoenix gives artists a platform to share their work

Julian Sodari’s love for public art was sparked at a young age. Unable to visit art galleries as a child, Sodari said his neighborhood murals and graffiti served as his own personal art gallery.

In 2013, Sodari graduated from Arizona State University with his master’s degree in geographic information systems and his bachelor’s degree in urban planning from the School of Geographical Sciences and Urban Planning in The College of Liberal Arts and Sciences. 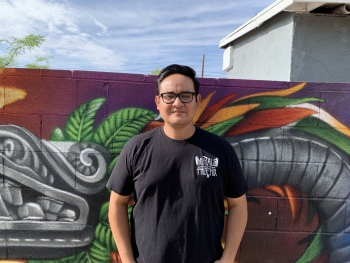 As a first-generation college student, Julian Sodari said the importance of education was instilled in him early on by his parents, both Mexican immigrants. Because of his dad’s background in construction, he initially considered pursuing a degree in architecture at ASU, but ultimately decided that urban planning was more aligned with his interests. Download Full Image

A year later, he combined his love for street art with his technical expertise in mapping, urban planning and geographic information systems and founded Murals of Phoenix — an organization that supports and promotes Phoenix artists by providing them a platform to share their work.

As a first-generation college student, Sodari said the importance of education was instilled in him early on by his parents, both Mexican immigrants. Because of his dad’s background in construction, he initially considered pursuing a degree in architecture at ASU, but ultimately decided that urban planning was more aligned with his interests.

The idea for Murals of Phoenix originated when Sodari met Sam Gomez, the owner of the Sagrado Galleria in south Phoenix. As a gallery owner, Gomez was often asked questions about murals in Phoenix, including where they were located or which artists created them. This inspired Gomez and Sodari to create a mural mapping application that would help interested individuals find murals and learn more about them.

“For a couple months we were developing the web map with location points for all the murals in the Valley. We would photograph them and then add personal artist stories about each piece, and that’s kind of how it all started,” Sodari said. “It’s become a priority for us to give back to these artists. Murals are free art — someone pays for it, but we all get to enjoy it. By providing services to the artists, we want to ensure they get paid so they can make a living doing what they love.”

Over time Murals of Phoenix evolved from a mapping application into an organization that plans and hosts events to benefit artists as well as a resource that helps connect artists with those who are looking to commission a mural. The organization has become established in the arts community, with a large following on Instagram where it showcases recent work by local artists.

“What Julian’s organization does is incredibly important to the mural community,” local artist Isaac Caruso said. “By showcasing Phoenix talent to a large audience on Instagram, our abilities and styles gain notoriety. These good people who catalog the murals, promote talent and facilitate some things on the administrative side are a crucial part of our city’s thriving art community.”

Along with running Murals of Phoenix, Sodari also works full time at EASi, a local utility engineering firm. Sodari said that The College equipped him with the tools he needed to succeed in the real world.

“My program provided me with a good foundation that I was able to build upon, evolve and apply to my current work,” he said. “My master’s really prepared me the most by giving me the knowledge I needed to think analytically about using geography as a tool.”

Although a recent Murals of Phoenix event was canceled due to the coronavirus, Sodari has found new ways to continue to connect the community with artists through livestreams and virtual events.

Learn more about Murals of Phoenix at muralsofphoenix.com or on Instagram @MuralsofPhoenix.

When California’s shelter-in-place order was issued in March of this year, Los Angeles comedian Kristina Wong had grandiose plans of cleaning her house and sticking to a workout regimen.Instead, Wong found herself fronting an amateur medical factory right from her living room and becoming “sweatshop overlord” to Auntie Sewing Squad, a group that now includes more than 600 members that dedica...

May the Fourth be with ASU Star Wars fans

When California’s shelter-in-place order was issued in March of this year, Los Angeles comedian Kristina Wong had grandiose plans of cleaning her house and sticking to a workout regimen.

Instead, Wong found herself fronting an amateur medical factory right from her living room and becoming “sweatshop overlord” to Auntie Sewing Squad, a group that now includes more than 600 members that dedicate their time and resources to creating face masks for health care professionals and other essential workers. Kristina Wong's show, "Kristina Wong for Public Office," draws from her experiences as a public official. It will air through ASU Gammage’s Facebook page on May 28. Download Full Image

“This is what we do now as performance artists — create and fix medical equipment,” Wong jokingly said.

The currency the squad deals in is fabric, elastic and the time put into making masks. While most people who are staying at home are on a Netflix-binge marathon, Wong and her crew are on a sewing one. On Thursday, Auntie Sewing Squad sent a van full of supplies, including masks, materials and three sewing machines, to the Navajo Nation, which has been hard hit by the virus.

“I’m like, ‘How did I go from sewing a few masks to humanitarian aid missions?’ But this is the country we live in,” Wong said. “We have no government that’s functioning, so we have to do what we can.”

Armed with her Hello Kitty sewing machine, Wong said the work she does is not just about making masks; it’s about the community that’s been built and the way its sustained itself to protect the community at large.

“This is where I see my work as an artist,” Wong said. “We’re in the business of making communities and trying to engage people in meaningful ways, so for me, I don’t want people to create a labor farm, but I want people to find friendship, meaning and power in this work.”

Wong said, “If you’re bored at home, think about the power that you do have right now, and how you can be of support to other people.”

Besides being a performance artist, Wong is an actual elected representative from Koreatown’s Wilshire Center Neighborhood Council. Her new show, “Kristina Wong for Public Office,” draws from her experiences as a public official to highlight a campaign-based performance of satire and political commentary.The show began its tour in February 2020 before being halted due to COVID-19.

Even so, that hasn’t stopped Wong from continuing her show, which will be available through ASU Gammage’s Facebook page at 6 p.m. May 28. “Excerpts from Kristina Wong for Public Office” will be Wong’s first attempt at shifting her show to a virtual format.

“I have to dust off this old show — which isn’t even that old — but my mind and body have been in such a different place that I’ll have to integrate some of these new stories I have and still give it that ‘rally’ feel from my living room,” Wong said.

Wong said that although she wishes things were different, she’s happy to see artists try to embrace performing in a virtual format.

“The bar is so low — I don’t think anyone is expecting Zoom theater to blow them away — so there’s a lot of discovery to be made.”

Wong said she thinks people have felt helpless over the last few years, and her show aims to empower the audience.

“I ended up running for office because even as an artist, I couldn’t outdo the spectacle of real life anymore,” Wong said. “I thought, ‘If they’re going to take my job, I’m going to take theirs.’ A lot of what I’m discovering now during this time is just how inept the system is, the one that’s supposed to protect us, because it’s so slow, because it’s so mired in approvals and politics and filibusters, that citizens who take direct action can actually get more done.”

In the world of government, Wong said that a lot of what politicians do is not that much different from artists; they create a lot of symbolic gestures and are actors in a public space.

“All we have right now are symbols, because we don’t have soap apparently, or vaccines and stuff like that,” she said. “So that’s power to me, and where our art is power. Putting symbols and culture and messages out into the world, but also action.”

Wong said she encourages folks to run for office, vote and not totally give up on the system when action can be taken.