Philosophy alumnus and donor reflects on impact of humanities in businesses

Tom Fournier had a successful career in engineering and business management and after co-founding and selling a company that measured automotive pollution for governments, he was able to retire early at 55 years old.

The following two years were spent dabbling in hobbies as a private pilot and a skydiver and volunteering at Tucson’s Community Food Bank and Literacy Connects. Despite keeping himself busy, Fournier felt something was missing. “It was a lack of challenge, or maybe lack of personal growth,” Fournier said. “I began wondering whether 57 years old was too old to go back to school and found myself leafing through the community college catalog for courses unrelated to my prior degrees in engineering and business administration.”

Fournier found himself hooked on philosophy just two weeks into a course in introductory logic and philosophy. After a few more beginning courses, he transferred to the University of Arizona for more extensive classes until he was ready for graduate-level work and applied to begin his master’s degree in philosophy from Arizona State University.

“Logic and critical thinking are comfort food to an engineer and the ancients' musings on the meaning of a ‘good life’ are a gravity well to someone who’s halfway through,” Fournier said.

He directed his research on emergence and mental causation and was pushed to challenge himself in new ways by his thesis adviser and Emeritus Professor of philosophy Bernard Kobes.

“(He) prodded me with resource suggestions while gracefully wielding his respectful demeanor in critique of my occasionally naïve assertions,” Fournier said. “Successful defense and committee acceptance of the final 34,000-word document was a high point in my master’s studies.”

Fournier had another great success while pursuing his master’s degree when an earlier paper was published in the second edition of "Environmental Ethics,” a college textbook by David Schmidtz and Elizabeth Willott. That paper was on the moral issues involved in pollution abatement.

“Tom brings to any inquiry a unique blend of confidence and humility,” Kobes said. “This makes thinking with him not only productive but also a distinct pleasure. I am fortunate and grateful to have been able to work with Tom in the development of his ideas. A philosopher is, etymologically, a lover of wisdom. Tom exemplifies this ancient ideal and makes it relevant to new frontiers in business and engineering.”

As he was wrapping up his degree at ASU in 2013, Fournier was having dinner with a friend whose company was about to expand. By the end of the dinner he offered to manage the expansion of the engineering facility in Tucson and became the chief technology officer of Opus Group.

“It’s interesting to note that, due to training in philosophical discourse, my role in that position quickly swelled from managing technology development to include strategic business development,” Fournier said. “When we chase multimillion-dollar government contracts to inspect vehicles for emissions or safety defects, it’s my job to write the multipage executive summaries that pitch our organization.”

He attributes the expansion of his career role to his academic development in the philosophy program in ASU’s School of Historical, Philosophical and Religious Studies.

“My abilities to form a cogent argument, anticipate rebuttals and forestall them in advance were incomparably better than the earlier days of my career, and so too were my abilities to communicate those points in writing,” Fournier said. “I had not anticipated that skills gained in the study of philosophy could improve real world performance in business.”

While Fournier worked as the CTO of Opus Group he continued to write and submit philosophical papers for publication. As he approaches retirement again, he finds his research in philosophy to still give him personal growth, and philosophy allows him to explore many different genres.

More specifically, he enjoys applying philosophical concepts and analytic techniques to contemporary issues and his publications can be found on his website.

“For example, those Philippa Foot trolley problems that we study in intro ethics are playing out now in the software designs of fully autonomous vehicles,” Fournier said. “Similarly, the fallacies of the ancient Athenian Sophists are still in play and ubiquitously employed by our cable news channels on both the right and the left.”

Fournier wants to encourage all students to never stop thinking of themselves as students. Given his start as an engineer, his interests moved to the humanities as he moved through life.

“My advice to humanities students is don’t let the STEM trend weaken your commitment to the humanities, especially in light of our current global situation,” Fournier said. “The humanities are relevant now more than ever. STEM might be the engine propelling much of our modern society, but the humanities have the steering wheel.”

Fournier graciously supports the philosophy department, allowing students to have the same experience he did.

“ASU welcomed me,” he said. “In fact, throughout my coursework at ASU, I didn’t have a single bad experience with a professor or a fellow student. Given my age relative to the student body and most of the professors, that speaks well of the people who ASU attracts.”

Editor's note: This story is part of a series of profiles of notable spring 2020 graduates.Coaches often demand their teams to “finish the game strong,” and that is exactly what a former high school star athlete and military veteran from North Carolina did this semester as he achieved a lifelong goal — finishing graduate school.Jeffrey “LA” Logan completed his online Master of Sports L... 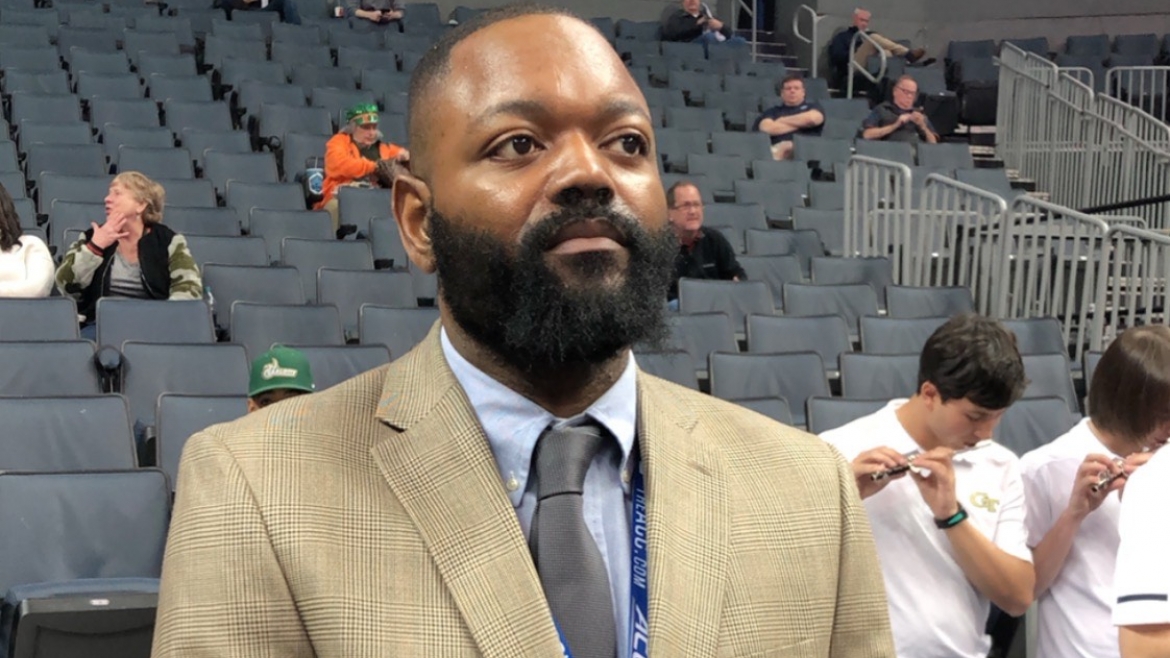 Coaches often demand their teams to “finish the game strong,” and that is exactly what a former high school star athlete and military veteran from North Carolina did this semester as he achieved a lifelong goal — finishing graduate school.

Jeffrey “LA” Logan completed his online Master of Sports Law and Business degree with the Sandra Day O’Connor College of Law this May, and on his way out earned the Dean’s Award for going “above and beyond” by making a “significant mark on the program.”

Logan, an Army veteran who served in Afghanistan and later in Iraq as a civilian contractor, is the third member of his family to earn a graduate degree, he said.

“It’s a huge weight off my shoulders,” Logan said. “I feel accomplished but there’s still more work to be done as far as my career.”

Currently, Logan is working on an internship with the Atlantic Coast Conference, better known as the ACC. He said the opportunity came about thanks in large part to his college faculty, and for that he is grateful.

“Professor Renaut, Professor Jarvis, they played a huge role in helping me network, teaching me valuable lessons,” Logan said. “I don’t know if I would have had a chance to work with the ACC without them pointing me in the right direction, giving me the right phone numbers and the right names. 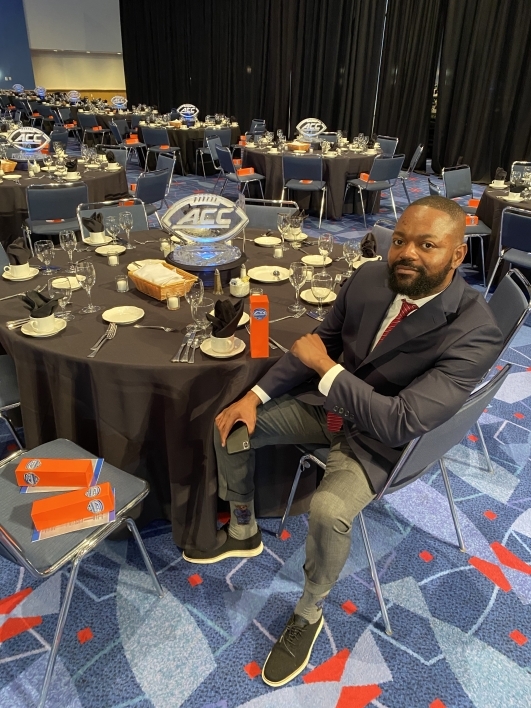 Jeffrey "LA" Logan pictured prior to the start of the 2019 ACC Football Championship Weekend Hall of Fame Banquet.  Logan is an intern with the ACC. 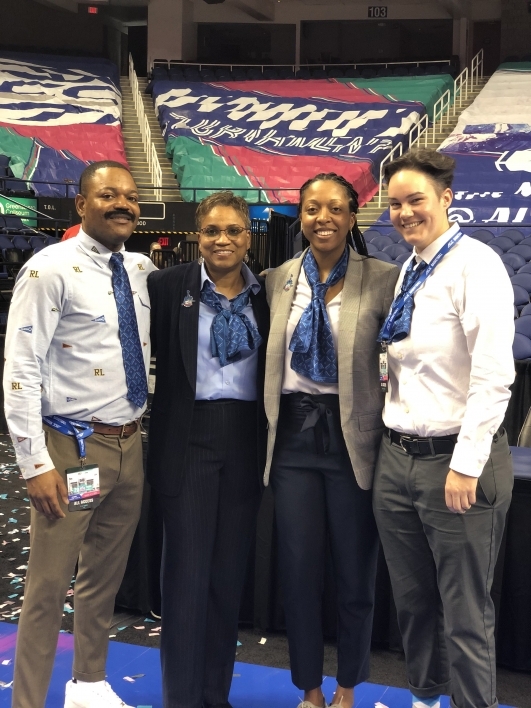 While working as an ACC intern, Jeffrey Logan poses for a group photo with work colleagues prior to the Women's 2020 ACC Basketball Tournament.

“I know they work their tails off and they are trying to help each and every one of us students reach our goals, and they are willing to do anything and everything within their power to do so.”

Logan wants to start a career in sports compliance with a college or university. He is passionate about sports, and very interested in the issue of paying college athletes. In what follows, Logan provides insight into the topic, and discusses other aspects of his ASU journey.

Answer: Maybe six months to a year before I enrolled at ASU, graduate school was just a thought. As the debate ensued about collegiate athletes being paid, I thought it was the perfect time to learn more about sports law and business. Every day I would wake up and all I could think about was athletes earning pay. This was the time when the O'Bannon case was at its forefront. Student athletes had not been paid for their name, image and likeness (NIL) amid being portrayed in NCAA sports video games. Moreover, Northwestern University student athletes took a stand and tried to unionize. Even though the athletes failed to unionize, they were not afraid to take on a fight with the NCAA. I felt that a change was coming regarding pay. A couple of years later, student athletes are well on their way to being able to earn pay from their NIL. I figured there would be a need for college campuses to hire more compliance professionals due to NIL legislation.

A: Major changes in sports were decided in the courtroom; free agency, antitrust issues, collective bargaining, league sponsorships, the power of commissioners, college assistant coaches' pay, etc. Today, even in college sports, some assistant coaches sign multimillion dollar contracts. That was due to a Kansas court decision that the NCAA illegally restricted assistant college coaches' salaries under federal antitrust laws. In the early 1990s, the NCAA limited some assistant coaches salaries to $12,000 per academic term. Every case I read about while studying at ASU was more so a history lesson to how sports got to where they are today through courtroom battles.

A: While in undergrad, I took a sports law class that was really interesting. I wanted to find a graduate degree that focused on that subject. After doing some research, ASU provided that opportunity. Luckily, I applied to ASU when they first offered the Veterans Sports Law and Business degree. That told me ASU was serious about helping veterans strive for greatness. It was a no-brainer to apply, and I was blessed to be accepted.

A: Between Professors Samuel Renaut and Stephanie Jarvis, I learned a ton. The lesson was simple — outwork everyone and don't get complacent. Working in sports is ultra-competitive. To combat that, I applied that simple valuable lesson from Renaut and Jarvis, which helped me become successful while attending ASU.

A: Hard work is not a cliché. That is the one thing you can control without anyone’s help. Last, you should conduct as many informational interviews as your schedule allows, whether in-person or by telephone. Those interviews are a great way to build relationships in your field and may lead to an internship or employment. The most important informational interview I conducted led to an internship with the ACC. Pressure is a privilege.

A: I was an online student. During breaks, I would take hikes to really think about materials learned in class, and to just think about life and how I can reach my goals of working in college and professional sports.

A: Due to COVID-19, the sports industry is on hold. Before the pandemic, I was interning with ACC (compliance and women's basketball department) and working for ESPN. Once college sports resume, my goal is to seek employment within a college institute's compliance department.