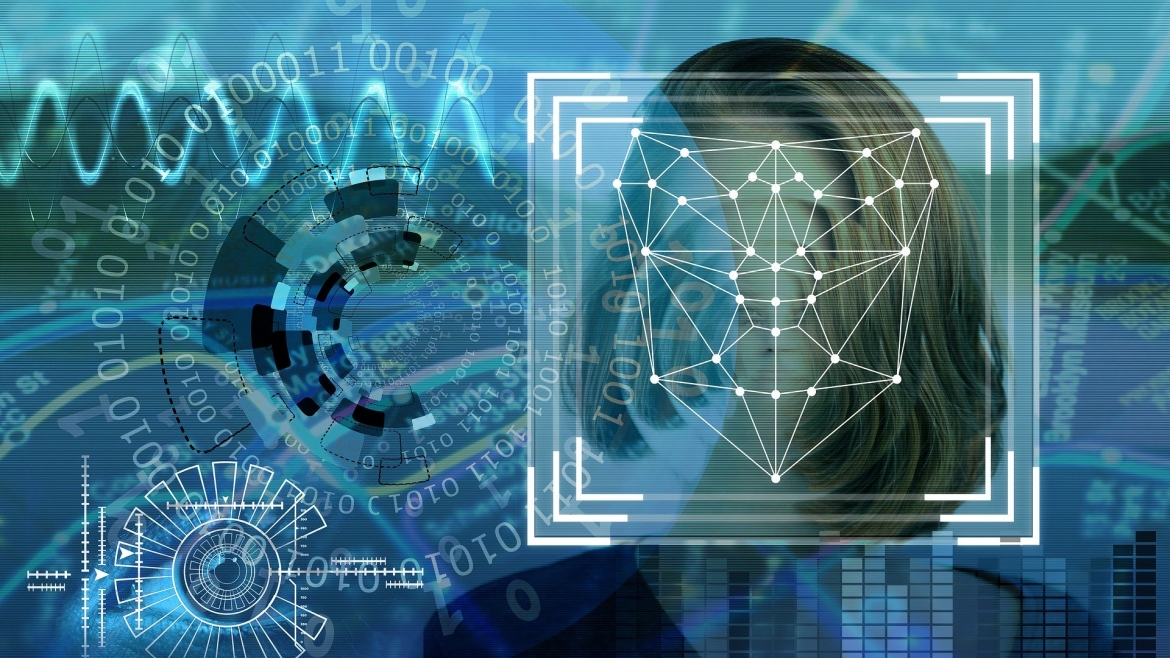 The proliferation of advanced technology has created many obvious benefits. But it has also raised new questions about privacy, data collection and data monitoring. Debating the trade-offs has inspired books, documentaries, movies, podcasts and TV shows, and it has made its way into political scandals and congressional hearings. As the world faces an unprecedented pandemic, how will technology help us move past the crisis? And how will our conceptions of privacy change as a result?

Privacy, surveillance and public health were the topics of conversation during the April 16 “social distancing social” convened by Future Tense, a partnership between New America, Arizona State University and Slate that explores emerging technologies and their transformative effects on society and public policy. This conversation was part of a series of events that take in-depth, provocative looks at issues that will dramatically reshape the policy debates in the coming decade.

In this webinar, Jennifer Daskal, professor and faculty director of the Tech, Law and Security Program at American University Washington College of Law, sat down with Kathryn Waldron, of the R Street Institute, and Al Gidari, director of privacy at the Stanford Center for Internet and Society, to discuss the ways in which data can help us understand and respond to the current health crisis.

“We need to think about good health and good privacy as going hand in hand,” Daskal said. “Both are essential as we move our way through this crisis. Good privacy and good privacy practices help ensure that data is used in ways that can promote the public health goals.”

The discussion around technology and public health typically focuses on location data. Gidari explained two primary types of location data that are interesting and useful during this time. The first is contact tracing, which allows companies to see whom individuals have been in physical contact with and let individuals know if and when they need to self-isolate. The second is aggregate tracking, which allows public-health experts to track the trajectory of the disease at the population level. Both of these data types can cause privacy concerns.

For instance, several companies are looking into ways to create apps that use Bluetooth technology to track the people you have been in contact with and alert you when one of them tests positive for COVID-19.

“The benefit of this approach is that it’s decentralized,” Gidari explained. “None of the data resides with a government agency. It’s as close to anonymous as you can get. There are some potential weaknesses or flaws that people have identified in using Bluetooth from a security perspective. But on balance those risks are pretty small.”

In other parts of the world, countries are developing apps that require individuals in self-isolation to upload photos or use location data to prove they are staying home.

“There is a wide spectrum of how intrusive the data is,” said Waldron, who is a national security and cybersecurity resident fellow at the R Street Institute. “Up until now there have been stay-at-home orders, but there hasn’t been as much legally required quarantining.”

Waldron did issue a warning to consumers as these different apps and types of data collection continue to be developed during this public-health crisis.

“Always keep in mind: ‘What is the data being collected?’ ‘Who’s going to hold the data?’ ‘How long will the data be held?’ and ‘What type of data is it?’” Waldron said. “Without asking those questions it’s really hard to compare and contrast all of these different types of surveillance apparatuses and apps that are being designed.”

Gidari urged the companies developing these apps, and the governments using the data, to be as transparent as possible.

“Trust and transparency are critical for these systems to work. People need to understand there is no long tail to the data in the hands of the government,” he said. “If you just don’t know where your data is going to end up afterwards, you’re just not going to share it and none of these systems will be very effective. Transparency is key.”

Global manufacturing has entered a new era. Some people call it smart manufacturing or Industry 4.0. Companies apply complex information systems to manage what happens on a factory floor, where almost everything is monitored and processes are streamlined.“Even so, uncertainties happen all the time,” said Feng Ju, an assistant professor of industrial engineering in the School of Computing, Inf...

Global manufacturing has entered a new era. Some people call it smart manufacturing or Industry 4.0. Companies apply complex information systems to manage what happens on a factory floor, where almost everything is monitored and processes are streamlined.

“Even so, uncertainties happen all the time,” said Feng Ju, an assistant professor of industrial engineering in the School of Computing, Informatics, and Decision Systems Engineering at Arizona State University. “A production component may fail, or new orders arrive that demand rush delivery. There are many possible sources of disruption at a factory, and any one of them can mess up scheduling or production execution.” 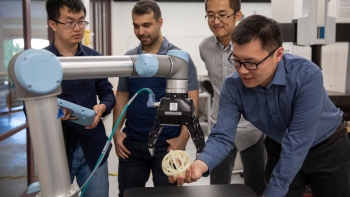 Consequently, Ju’s Manufacturing and Service Automation Lab team at the Ira A. Fulton Schools of Engineering is developing novel computational tools to prevent or minimize the cascading effect of any production disruptions. They do so by applying huge amounts of manufacturing data to support real-time decision-making that enhances production efficiency, quality and safety.

“Our work seeks to support a new generation of manufacturing automation,” Ju explained. “Forty years ago, we saw computer-aided control introduce electronics to the factory floor. That level of automation delivered tools with mostly single purposes. It was very stiff or static.”

Ju points to the example of car manufacturing. Automotive production does rely on complex assembly lines, but the architecture of those same production facilities actually limits the design options for new cars.

“Ideally, the robots and controllers that assemble one type of vehicle should be able to support the assembly of new car designs, too,” Ju said. “However, traditional industrial systems are quite rigid. They are configured and installed to manufacture specific things, and require a lot of engineering effort to reconfigure.”

Ju says that industry now needs the ability to design applications or tools for novel purposes.

“We are moving from high-volume manufacturing with very limited variation in output to low-volume production with constantly varying demands,” he said. “So, we need production facilities that are dynamic. But this kind of change requires a completely different mindset.”

Ju explains why most manufacturing has not innovated to the extent of consumer electronics, for example. When consumers want a new smartphone, they want all the latest features and functions. By contrast, manufacturers traditionally don’t pursue novelty. They acquire industry-standard components for their production system.

“They are thinking about just the final product, and their factory is simply the means of fabricating it,” Ju said. “Moving forward from this model requires thinking of the design and manufacturing process as actually part of what businesses are delivering to customers.”

As a case in point, Ju and his team have been commissioned by Tennessee-based LM Industries Group, or LMI, for a project meant to improve a large-scale additive manufacturing process that fabricates an autonomous, multipassenger shuttle bus called Olli.

“It’s similar to a home 3D printer in that it works through a layering process, but it’s obviously much larger and more complex,” Ju said. “One of the things we are doing is gathering a vast number of thermal images of the print bed to get a sense of real-time changes in layer temperatures during production. We can use this information to create predictive models about the thermodynamics or temperature changes that occur over time in this setting.”

With these models, Ju explains that LMI can identify a production strategy to permit the most efficient, layer-by-layer printing process as they speed up production and increase quality.

“Large-scale additive manufacturing processes are still a fairly new technology,” said Nils Hofmann, director of labs for LMI. “I am certain that this research will uncover additional potential for LMI and ASU to cooperate and create further research opportunities.”

Ju is particularly excited about those future opportunities, since the Olli shuttle bus is just one application of a broader concept.

“The focus of their work is developing flexible, local manufacturing,” he explained. “Consider it a microfactory. The idea is to bring design and production capabilities to individual neighborhoods. People could design and 3D print their desired products right down the street, and then pick them up locally with short lead time. Think of the logistics and warehousing savings, and the reduction in waste. The potential is very exciting.”

Ju and his research team also have just started a three-year research project with the Intel Corporation at the company’s campus in nearby Chandler, Arizona. Nital Patel, the principal engineer for assembly test manufacturing systems at Intel, says Ju’s efforts will address a fundamental problem.

“How do you make real-time decisions to keep your manufacturing flow on target given unanticipated disruptions?” Patel said. “Traditional methods look at using simulation coupled with optimization to make these decisions, and these cannot provide answers in real-time. This is of extreme interest as we push the boundaries of using advances in machine learning and artificial intelligence in an industrial decision systems setting.”

Ju explained, “The Intel factory produces many different semiconductor products in a broad range of quantities. And with so many manufacturing processes taking place in the same space, there always are questions to consider about how to make sure that production facilities are being used in the most efficient manner. So, our team is working on several different decision-making tools to better streamline production on their factory floor.”

These projects with LMI and Intel demonstrate the commercial value of the research that Ju and his team are conducting at the Fulton Schools. But recognition of Ju’s innovative work extends beyond these projects.

The National Science Foundation awarded Ju a new $400,000 grant this spring to support research enabling more proactive control of industrial production systems. Also, Ju has been recognized as a 2020 Outstanding Young Manufacturing Engineer by the Society of Manufacturing Engineers. This SME award honors just 15 people under the age of 36 for exceptional accomplishments and contributions to the manufacturing industry.

Alongside such significant professional acknowledgment, Ju remains devoted to advancing new talent within his team at ASU. He doesn’t recognize a boundary separating research and teaching. They happen simultaneously, in real-time.

“It’s very important for my work with students to stay at the front-end of the technology used around the manufacturing world,” Ju said. “We all are fascinated by the opportunities that we have to make a real difference to industry.”