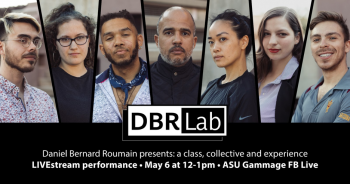 They developed the work as part of DBR Lab, which Roumain has described as “a class, collective and experience” in which contributors, working side by side with Roumain, design projects that are developed and presented within an academic year. The students have been developing their independent projects since the fall semester and were originally scheduled to perform at National Sawdust in Brooklyn on April 17. The performance was cancelled due to the COVID-19 pandemic, but the group responded to the challenge of having to present their work online.

“Adapting my honors thesis performance to the digital platform was not a choice, but a necessity,” said Waller. “Technology does not stop us from telling stories, from connecting with one another, from seeing one another. The stories needed to be told and the dances needed to be danced. People were craving being in space together, and I knew my responsibility was to create and hold that space. So, my dancers and I went to work, and through the process we discovered so much deep knowledge about ourselves, about intimacy and about community."

They adapted their projects into a 60-minute livestream presentation, hosted by ASU Gammage on Facebook Live as part of Gammage’s Digital Connections series. The presentation will stream at noon Wednesday, May 6, on the ASU Gammage Facebook page.

“We are grateful to ASU Gammage for their support of these emerging artists by giving them a platform to share their work,” Roumain said.

Michael Reed, senior director of programs and organizational initiatives at ASU Gammage, said they are excited to be working with DBR Lab.

“Daniel Bernard Roumain has been an integral partner with ASU Gammage for 20 years in bringing to life our mission of connecting communities,” Reed said. “We are delighted to be partnering with (the Herberger Institute for Design and the Arts) and Dr. Roumain again along with his extraordinary DBR Performance Lab students as we engage the future together with innovation and the deeply human language of artists. The lab’s livestream performance on ASU Gammage’s Digital Connections platform will move ASU Gammage forward in our livestreaming efforts though a dynamic, next level multidisciplinary broadcast more sophisticated in its melding of artists' expression and streaming media than anything we have done to date.”

Following the presentation, Roumain will moderate a post-performance discussion with the contributors.

Phillip Scruggs, known on stage as Wyld Tha Bard, is a poet and hip hop/roots performing artist and a graduate student studying social justice in the School of Social Transformation in The College of Liberal Arts and Sciences. He studies the role the performing arts have on raising social, cultural and political consciousness and is currently working on an album alongside Phoenix-based producer Bobby2083 to be released later this year. “Bring it Back 2 God” is his original spoken word performance that invokes a call to action for all humanity to remember what being alive is all about.

My-Linh Le is a graduate dance student in the School of FIlm, Dance and Theatre and a director, choreographer and dancer whose work revolves around the intersecting socio-political themes of the environmental crisis, racial inequality and the destructive effects of colonialism and capitalism. She practiced environmental law as an attorney while starting and developing the urban dance theater project known as Mud Water, which has been covered by national news media from NPR to PBS. As a competitive freestyle dancer, she represents one of the oldest competitive popping crews, "Playboyz Incorporated," and has danced for artists ranging from Sanford Biggers to Kendrick Lamar. "Me Love You Long Time" is about the machine-like endurance and work ethic of Vietnamese mothers — more than a reclamation of the line that demeaned and dehumanized Asian women, particularly Vietnamese women, for decades, the piece is also a look at the rage within.

Maggie Waller is a dancer, choreographer and teaching artist who is heavily involved in the local hip hop community in Phoenix. She is an undergraduate student in the School of Film, Dance and Theatre and recently premiered her thesis presentation "Reclamation," which explored the individual and collective narrative of apology in women and how dance could be the mechanism by which women find joy, power and liberation. She is a Fulbright Summer Institute Participant and a recipient of the Joan Frazer Memorial Award for Judaism and the Arts. Her work "nature/nurture" is a movement exploration of what it means to pause, to come back to our roots of finding the answers in nature during a time of uncertainty, grief and loss.

Cole Travis is a multi-instrumentalist, composer, storyteller and self-proclaimed obsessive creator. Travis is a communication student in The College of Liberal Arts and Sciences. They run the queer storytelling show “Say What?! Storytelling and Standup,” satirize consumerism and capitalism with the fictional propaganda band InfiniCorp and create improvisational music with the help of collaborative audiences as Opus Loops. "Work for Me" is a reflection of the physical limitations and rules we all must accept about our bodies, as well as their own personal experience with body dissatisfaction and chronic pain.

Keegan Carlson is a Phoenix-based filmmaker in his final year at Arizona State University. He has an interest in the human connection and relationships and aims to produce unique character-driven stories filled with detailed art direction and visual essence. In 2018, he won best director for his film “Lemonade” at the Scottsdale Short Film Festival and was an official selection for the Phoenix Film Festival. In the short film “Cone 10,” written and directed by Carlson, a struggling artist desperate for creative motivation accepts the advice of a close friend to take a dose of synthetic creativity.

Michelle Di Russo is currently assistant conductor of the Phoenix Youth Symphony and a doctoral candidate in orchestral conducting in the School of Music, where she serves as assistant conductor for the ASU Symphony Orchestra and other ensembles. Dedicated to the music of our time, she has participated as a fellow in the Cabrillo Festival of Contemporary Music, United States Army Band “Pershing’s Own” workshop and Cortona Sessions for New Music in Italy. “Intersección” explores the point where being an artist, dancer, performer and conductor meet while reflecting on the introspective journey of how restriction and isolation can lead to rebirth.

DBR Lab is managed by Herberger Institute alumna Malena Grosz and works in close collaboration with SOZO Artists. The program is currently in residence at the Herberger Institute for Design and the Arts at Arizona State University. Throughout the creative process, DBR Lab members meet and have creative conversations with established artists and art professionals in the field including luminaries such as Emily Berry of B3W Dance, Helga Davis, Ron K Brown, Martha Gonzalez, members of Anda Union, Skyler Badenoch (CEO of the Hope for Haiti Foundation), Michael Reed and many more.

Legendary musician Krist Novoselić, a founding member of Nirvana and a longtime leader in American democratic reform, has been named chair of the board of trustees of Zócalo Public Square, an Arizona State University Knowledge Enterprise. Along with bandmates Kurt Cobain and Dave Grohl, Novoselić changed the course of music history with the 1992 album "Nevermind." In the process, Nirvana opene...

Legendary musician Krist Novoselić, a founding member of Nirvana and a longtime leader in American democratic reform, has been named chair of the board of trustees of Zócalo Public Square, an Arizona State University Knowledge Enterprise.

Along with bandmates Kurt Cobain and Dave Grohl, Novoselić changed the course of music history with the 1992 album "Nevermind." In the process, Nirvana opened the doors for a new generation of musicians. 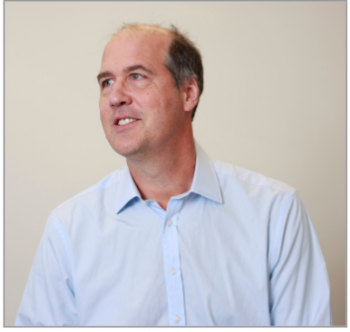 As board chair, Novoselić will serve a Los Angeles-based nonprofit that pursues a mission of “connecting people to ideas and to each other” and “engaging a new and diverse generation in the public square.” Since its 2003 founding, Zócalo has syndicated its ideas journalism to more than 250 media outlets worldwide, has hosted 600-plus live events online and across 33 cities and has partnered with dozens of educational, cultural and philanthropic institutions.

“Zócalo is about civic engagement — it is the public square after all,” Novoselić said. “It’s a culture that offers scholarship in an accessible way. In other words, this is fun and entertaining. These are serious times, and the key is trying to balance issues in a way that pulls people in from all walks of life.”

Novoselić, like Zócalo itself, is a native of L.A. County. Born in Compton, he grew up in Los Angeles, Croatia and Aberdeen, Washington. After Nirvana, he became one of America’s most politically minded musicians, authoring a book, "Of Grunge and Government: Let’s Fix This Broken Democracy," and chairing the board of FairVote, a nonpartisan electoral reform organization. He also serves as a member of the Washington State Grange.

Novoselić takes over as board chair from Moira Shourie, who is now Zócalo’s executive director. Previously, Novoselić was a member of Zócalo’s board, and a judge for the Zócalo Book Prize, which is given annually to the U.S. nonfiction book that best enhances our understanding of community.

On May 20, Novoselić will present the 10th annual Zócalo Book Prize to University of North Carolina historian William Sturkey, author of "Hattiesburg: An American City in Black and White." Sturkey will then give a lecture and answer questions from Pulitzer Prize-winning Yale historian David W. Blight. The event, which starts at 5 p.m. Pacific and 8 p.m. Eastern, is free, and you can RSVP here.

Novoselić earned his Bachelor of Science degree from Washington State University’s Global Campus. He is an active pilot. He currently has two musical projects — "Giants in the Trees" are a rock music quartet and "Butterfly Launches from Spar Pole" is a spoken word/musical collaboration with author Robert Michael Pyle. Novoselić plays accordion and finger-style guitar every day.