Anthropology clicked for Savannah Troha when she became involved with the Gombe Chimpanzee Research Project. 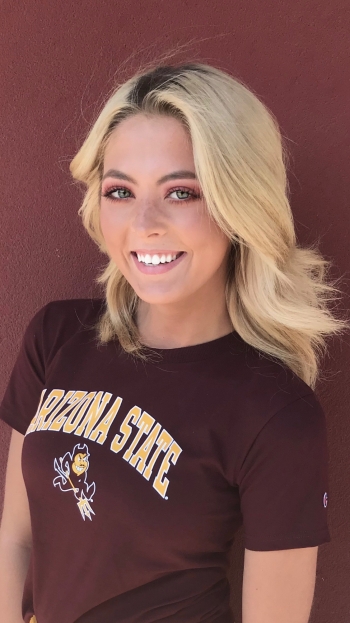 She fondly describes spending an entire semester transcribing data and searching field notes for mention of a certain orphaned chimpanzee. Co-director of the Gombe Chimpanzee Database, Associate Professor Ian Gilby, warned Troha it might be a little dull, but she loved it, recalling it was like reading a story.

Troha was looking for mentions of Pax, a small male who was horrifically injured at a young age and then lost his mother shortly after. Many chimpanzees would not have survived, but Pax did. He went on to become a thriving member of the troop, and even cared for younger orphaned chimpanzees. He was interesting to Troha because he didn’t fit the behavioral mold of most male chimpanzees.

Some of the field notes she reviewed were written in Swahili. While she didn’t know the language, she began looking for codes indicating specific chimpanzees. She was enthralled with the handwritten notes, and when areas were underlined or there were additional notes scribbled in the margins, she tried translating Swahili into English just to see what the researchers were talking about.

“Even at its most mundane or ridiculous I knew that there was nothing else I wanted to do,” she said. “Anthropology and primate behavioral ecology was ‘it’ for me!”

Her time spent researching as an undergraduate student spurred an independent research project, which she intends to pursue this fall when she returns to begin a doctoral degree in anthropology. While combing through thousands of pages of field research, she noticed that occasionally when two male chimpanzees had a physical altercation, they would be observed acting affectionately toward each other afterward. She will continue to work with Gilby to research conflict resolution behavior.

One of the reasons Troha finds primate research so interesting because it can spur us to think about relationships in general and how they work. Troha is looking forward to visiting Gombe, Nigeria, during her continued studies.

Troha, from Lake in the Hills, Illinois, is graduating with a Bachelor of Arts in anthropology from the School of Human Evolution and Social Change. She received funding from Studio Mechanics Local 476 Legal and Educational Assistance Fund.

Answer: I’m a lifelong Sun Devil! In the fall I will begin my journey as a graduate student in the School of Human Evolution and Social Change and start working towards my PhD in anthropology.

A: I chose to stay at ASU because I see the brilliance in the faculty and student body and the importance of the work being done here. I think I have barely scratched the surface and still have so much more to learn from my time at ASU and I’m more excited than ever.

A: I would use the money to support female education. The education of women and girls is so important, and I wish every girl had the same opportunities and support that I have had. Melinda Gates once said, “When we invest in women and girls, we are investing in the people who invest in everyone else.” With that in mind, initiatives that support female education support a better world for everyone and create opportunities for women to tackle other important issues.

Three Arizona State University students have won the prestigious Udall Undergraduate Scholarship, the most winners in more than 20 years.The Udall scholarship recognizes outstanding undergraduates who are pursuing environmental careers and Native American students who want to work in tribal public policy or tribal health. Only 55 scholarships were awarded this year nationwide.ASU’s Udall Scholar...

Tempe campus , School of Mathematical and Statistical Sciences , The College of Liberal Arts and Sciences , Barrett, The Honors College Three Arizona State University students have won the prestigious Udall Undergraduate Scholarship, the most winners in more than 20 years.

The Udall scholarship recognizes outstanding undergraduates who are pursuing environmental careers and Native American students who want to work in tribal public policy or tribal health. Only 55 scholarships were awarded this year nationwide.

ASU’s Udall Scholars are Nekiyah Draper, Tahiry Langrand and Grant Real Bird. Two other Sun Devils received honorable mentions in the competition: Alec Dugin, who wants to pursue a career in tribal health and is majoring in genetics, cell and developmental biology, and Catalina Alvarez Flores, who wants to work in tribal public policy and is pursuing degrees in anthropology and family and human development.

ASU students who want to apply for prominent scholarships get a lot of support from the the Lorraine W. Frank Office of National Scholarships Advisement at ASU. Last year, Brianna Miloz started working in the scholarship office specially to guide applications to the Udall program. She worked to recruit applicants and then helped them to clarify their goals and highlight their passions, particularly in the 800-word essay that’s required for the application.

“That’s a key aspect because it’s very focused on themselves, getting to the root of what they value, how they give back to the world and what legacy they want to leave behind,” Miloz said.

“We tend to be humble and we have a hard time talking about the great things about ourselves, so I had to get that out of them and tell them to state it clearly and be confident in their writing.”

The winners receive a $7,000 scholarship and attend a three-day conference in Tucson, where they work on case studies and workshops.

The scholarships are awarded by the Tucson-based Udall Foundation, which honors the legacies of brothers and former congressmen Morris K. Udall and Stewart L. Udall, who also served as Secretary of the Interior. Besides the undergraduate scholarships, the foundation also funds the Native American Congressional Internship Program. Among the 12 recent internship winners are two students at the Sandra Day O’Connor College of Law at ASU: Hilary Edwards, a member of the Swinomish Indian Tribal Community, and Dustin A. Rector, a member of the White Mountain Apache Tribe and a descendant of the Navajo Nation. Because of the COVID-19 pandemic, they will serve their internships in 2021. 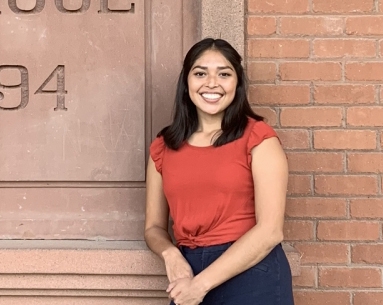 Bio: Graduated from Monument Valley High School in Kayenta, on the Navajo reservation, and is majoring in biomedical engineering.

Why she chose ASU: I chose ASU because they offered me a great scholarship and it’s close to home. I also kept in mind how ASU has a decent presence of Native American students on campus, which I thought would help with my college transition.

What’s ahead: Since I changed my major, my graduation date is now set for May 2022. Once I graduate, I will work in a prosthetic manufacturing lab as a lab technician, while attending a graduate program to become a certified prosthetist. My ultimate goal once I am a prosthetist is to establish and operate prosthetic labs across the Navajo Nation to serve my community.

What she’s learned at ASU that inspired her: I have learned that being an engineer comes with an intrinsic responsibility to serve living beings and the environment. 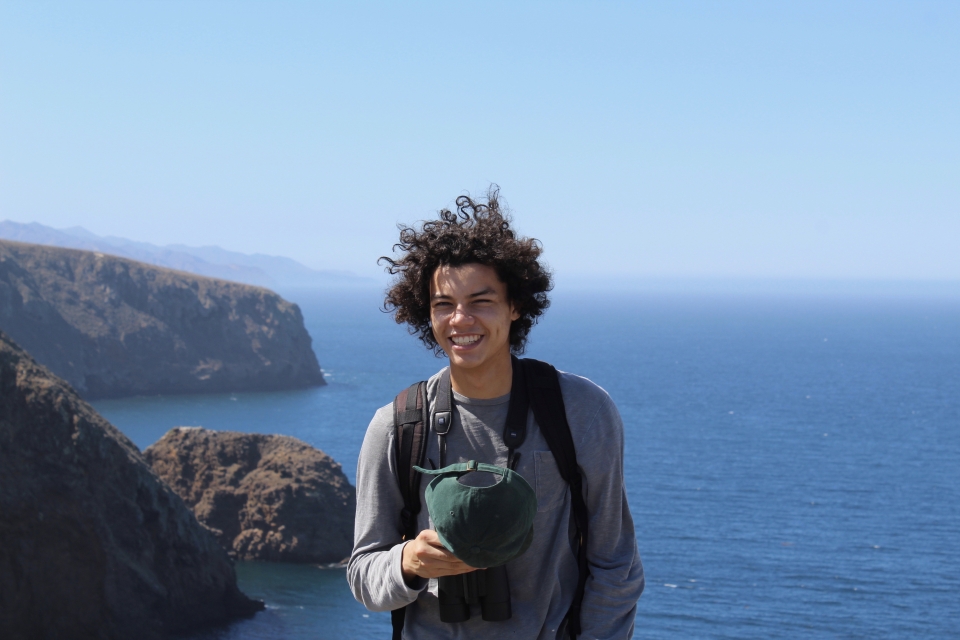 Bio: Graduated from South Lakes High School in Reston, Virginia, and is majoring in sustainability with a focus in ecosystems sustainability.

Why he chose ASU: I chose to attend ASU because the university hosts the nation’s first School of Sustainability, is a top-ranked research institution, and promotes inclusion and innovation as its foremost values.

How he chose his major: I chose to pursue a BS in sustainability to offer me a breadth of knowledge on both human and natural systems. This exposes me to a multi- and transdisciplinary mentality, a vital outlook on how to solve global issues. As a naturalist and conservationist, I chose to focus on biodiversity loss and ecosystem health.

What’s ahead: After graduation, I would like to gain cross-cultural research experience through a fellowship abroad such as the Fulbright program. After, I plan on attending graduate school to specialize in biodiversity science, and then enter the professional world through a conservation (nongovernmental organization), advancing science in a corporate position, or working on public policy. I would like my career to focus on mitigating biodiversity loss in order to serve the global community, improve human well-being, and promote environmental sustainability.

What he’s learned at ASU that inspired him: At ASU, I have learned several fundamental sustainability concepts with the most prominent being systems thinking. This holistic problem-solving approach has solidified my perspective of including humans as a functioning part of the environment, which has allowed me to identify a clearer career path. 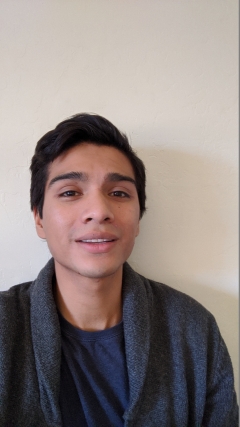 Bio: Graduated from Blue Ridge High School in Pinetop and is majoring in environmental resource management with a certification in wildlife management.

Why he chose ASU: I chose ASU for the diverse opportunity in programs and education. ASU has one of the largest networks in the country and I wanted to be a part of that Sun Devil family! I also wanted to see what life in the city would be like and I thoroughly enjoyed it.

How he chose his major: The major I chose really looked into the scientific and regulatory aspect of U.S. environmental laws and programs. I wanted to learn more about how to help combat climate change and reduce the amount of pollution we produce as a country. The wildlife certification gives me insight into how to manage populations of animals and take care of the natural ecosystem for all to enjoy. I like to see it as helping people and helping animals.

What’s ahead: There are so many things that are out there that I wish to do, such as becoming a writer or a professional snowboarder, but right now I hope to one day help my tribe with an array of environmental and wildlife issues either as a wildlife ranger or environmental coordinator. Any good that I can do for my tribe — White Mountain Apache and Crow (Apsáalooke) — and the people won’t be easy, but I’m up for a challenge.

What he’s learned at ASU that inspired him: I have learned about the importance of teamwork and resilience from being here at ASU. Since freshman year, I have collaborated in many projects and internships related to the environment and wildlife species. ASU taught me that if you have a long-term vision, then you need help from others to achieve that vision. ASU gave me the opportunity to look at different careers and job choices to guide me to a better future.