Arizona State University School of Earth and Space Exploration and Center for Meteorite Studies graduate student Emilie Dunham will be receiving her PhD in geological sciences this May. 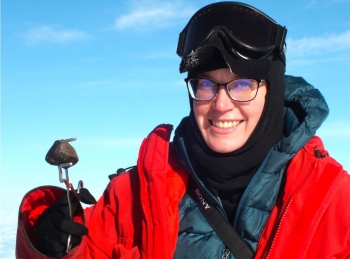 Emilie Dunham on a meteorite hunting trip in Antarctica with the 2019–2020 ANSMET (Case Western Reserve University project funded by NASA's Planetary Defense program and supported by the US Antarctic Program) displaying a meteorite that the team found in Antarctica on a glacier. Photo credit: Lauren Angotti/ANSMET. Download Full Image

Among her many achievements, Dunham was recently selected for a 51 Pegasi b Fellowship in Planetary Astronomy, which provides exceptional postdoctoral scientists with the opportunity to conduct theoretical, observational, and experimental research in planetary astronomy. Dunham will be hosted by the University of California, Los Angeles, Department of Earth, Planetary, and Space Sciences and will be studying the heritage of meteorites to develop a timeline for planet formation and other early solar system events.

Answer: I realized that I wanted to study meteorites during a class called "Planetary Materials" during my junior year of college at Case Western Reserve University. In this class, we learned about, touched and studied a huge range of meteorite samples — I couldn't get enough and pursued this field in graduate school. I felt and still feel that meteoritics falls at the perfect intersection of my astronomy, planetary science and geology passions. 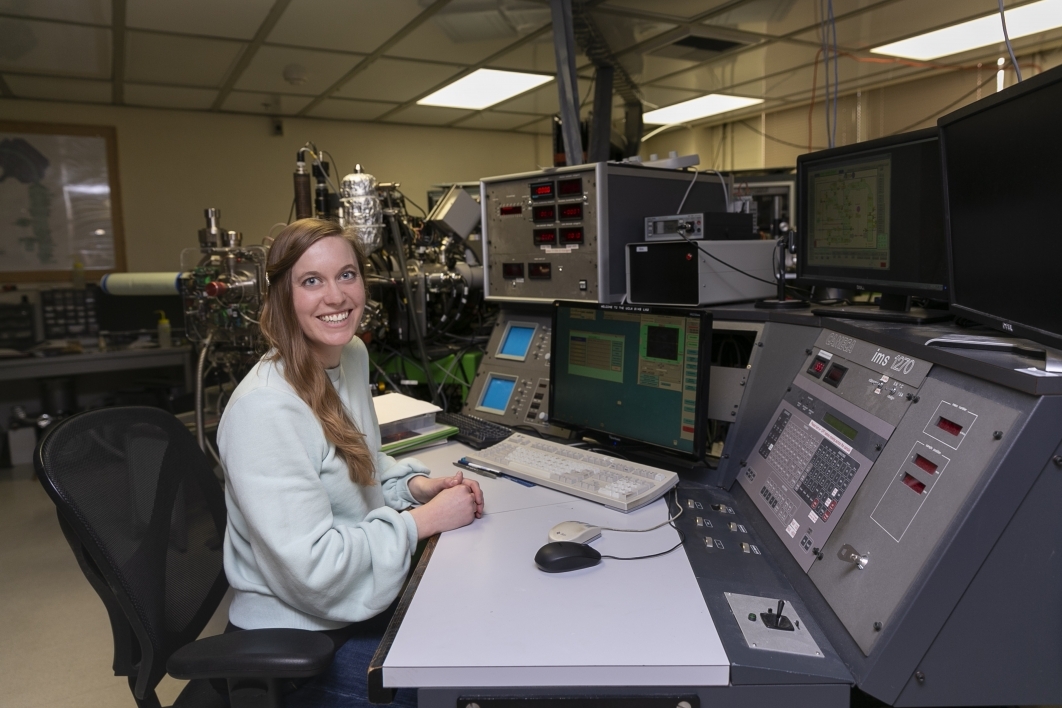 A: Other than learning how to survive in 120 degree Arizona dry heat, I am continuing to learn about the importance of science communication and how it can positively affect those you engage with.

A: I was very excited to attend and be a part of the Center for Meteorite Studies in the School of Earth and Space Exploration because of the opportunity to work with my adviser, Professor Mini Wadhwa, the expansive meteorite collection and incredible community.

A: My advice is to find and practice other passions in life that exist outside of school and research. For me, running has always been a necessary outlet and helps me approach a work-life balance.

A: The Center for Meteorite Studies suite and meteorite vault in ISTB4. Being surrounded by meteorites and a great research community inspires me to ask big questions about how the Solar System formed.

A: I will be working at UCLA as a 51 Pegasi b postdoctoral fellow. I get to continue studying meteorites and discovering the secrets of solar system formation!

An ‘EPIC’ team of scientists graduates from ASU

Editor's note: This story is part of a series of profiles of notable spring 2020 graduates.About five years ago Karalee Brugman, Meghan Guild and Hannah Shamloo chose Arizona State University's School of Earth and Space Exploration for graduate school.They were impressed by the school’s facilities and the possibility of working with professor and petrologist Christy Till in her Experimental P...

An ‘EPIC’ team of scientists graduates from ASU 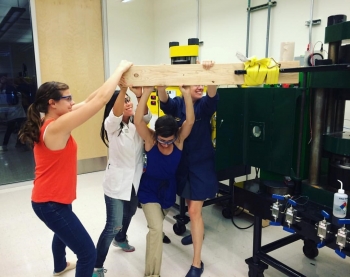 They were impressed by the school’s facilities and the possibility of working with professor and petrologist Christy Till in her Experimental Petrology and Igneous processes Center (EPIC) lab.

This May, all three will be graduating with their PhDs in geological sciences. Throughout their graduate studies, they have worked together, studying magma in the lab and volcanoes in places like Yellowstone National Park, Mount Shasta in the Cascades of California and the Laguna Del Maule volcano in Chile.

“We literally climbed mountains and crossed canyons together to get to this point,” Till said. “It has been my greatest joy and accomplishment in my faculty job so far to be their advisor and watch them grow.”

All three soon-to-be PhDs have bright futures ahead. Brugman will be a postdoctoral scholar at the Carnegie Institution of Science’s Earth and Planets Lab in Washington, D.C.; Guild received funding from the National Science Foundation’s GeoPRISMS program for a postdoctoral fellowship at University of Texas at Austin; and Shamloo will be starting a National Science Foundation postdoctoral fellowship at Oregon State University followed by a faculty position at Central Washington University. Karalee Brugman works in the EPIC lab in ISTB4 on the Tempe campus. 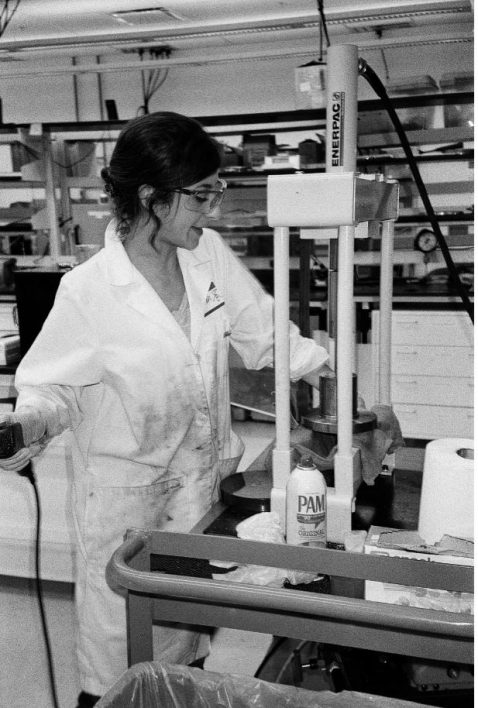 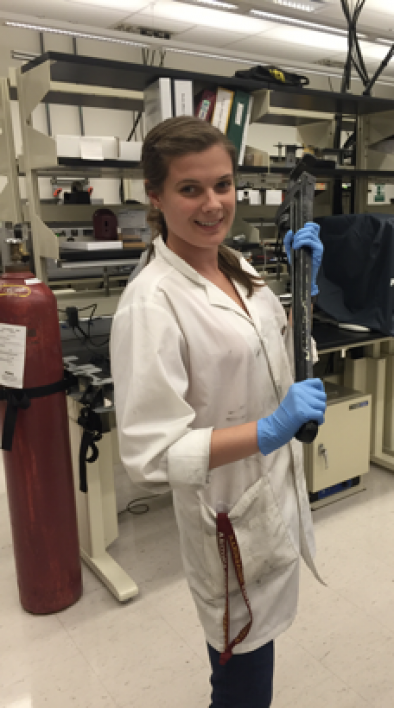 Meghan Guild works in the EPIC lab in ISTB4 on the Tempe campus.

Brugman said she knew she wanted to study geological sciences when she was working in web application development but didn’t feel fulfilled.

“I wanted to change careers and wasn’t sure what to do until remembered how much I had loved rocks and space as a kid,” she said.

Of her adviser, Brugman said, “Christy Till was interested in helping me figure out and achieve my own goals. It was important to me to have an advisor who would be present and supportive.”

In addition to Till, Brugman said Rick Hervig, Dave Williams, Steve Semken and Axel Wittmann had a positive influence on her.

“They are fantastic scientists, as well as being kind, genuine people who lead by example and foster an environment where students feel comfortable and able to be curious without fear of making mistakes.”

Her advice to those still in school is, if you are confused by something, lean into it.

“I didn’t understand some results I was getting with my primary project, and when I investigated I stumbled onto an entire area of research that became my first first-author paper,” she said.

Guild first realized she wanted to study geological sciences when, for a school exam, she was asked to describe a rock in a thin section.

“The rock has what we call a poikilitic texture, where one mineral is enclosed in another mineral in an igneous rock,” Guild said. “It all clicked for me in that moment. I could see that these crystals were forming first then this other mineral crystallized around them!”

When asked if there was something she learned at ASU that surprised or changed her perspective, Guild said she learned that interdisciplinary research and collaborations open many doors.

“Collaboration is not always easy, with each discipline speaking their own language, using their own jargon,” she said. “But it makes us more effective communicators and broadens our scientific perspectives in important ways. The interdisciplinary nature of the School has shaped my future research directions and I am a better scientist because of it.”

In addition, Guild said that Till taught her not only about science in the lab and field but also about strategies for time management, building self-confidence and effective science communication.

Her advice for students working on their degrees is that persistence is your friend.

“Nothing you do is always going to be perfect but showing up and trying your best, whatever best means on that day, that’s what you have to do.”

Shamloo first became interested in geological sciences when she learned about earthquakes in school. “

These events made the Earth seem ‘alive’ so to speak, and I wanted to learn more,” she said.

What Shamloo learned at ASU that changed her perspective is that you don’t have to be an “Einstein-type” to make it in the world of science.

“Coming to ASU I learned that scientists are diverse and well-rounded,” she said. “Many of my scientist friends have other skills and interests such as art, music, dancing, climbing, biking, etc. and we are more than just our science.”

Her advice to those still in school is that graduate school is a marathon, not a race.

“Your strengths and weaknesses will be different than your peers: Embrace this. Being your authentic self will serve as your greatest asset,” she said.