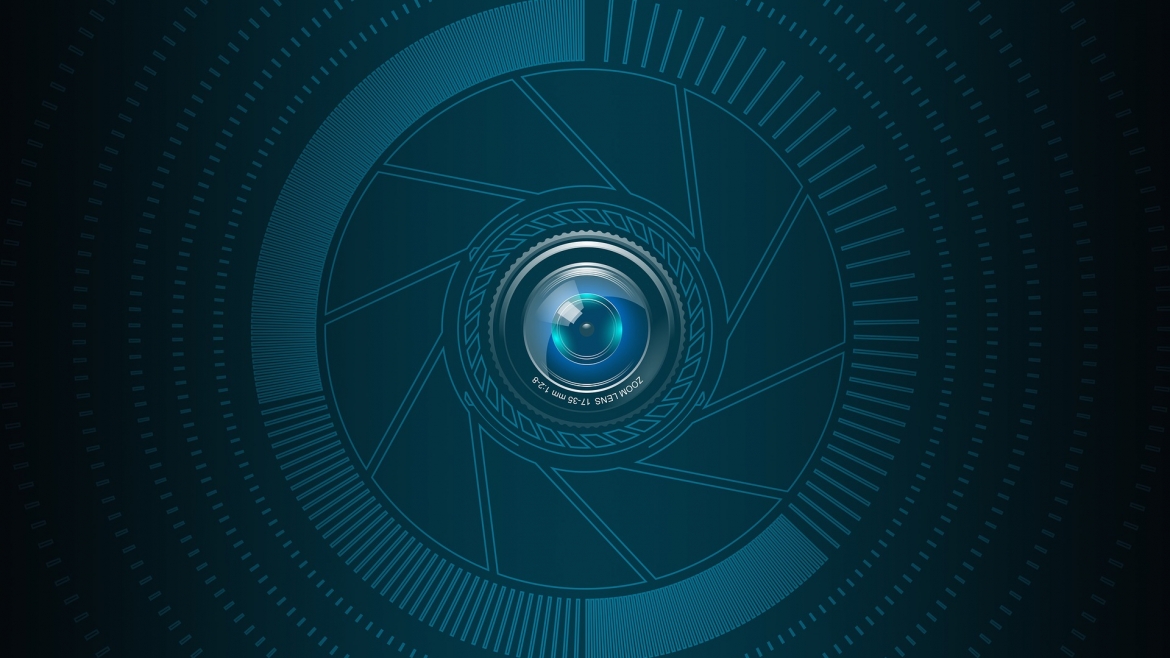 President Donald Trump has masterfully used the rhetoric of the "deep state" to divide Congress and the public and to deflect attention away from himself, according to David Rohde, a two-time Pulitzer Prize-winning investigative journalistDavid Rohde is an ASU Future Security Fellow at New America, executive editor for news for NewYorker.com, a global affairs analyst for CNN and a two-time winner of the Pulitzer Prize for international reporting. He is a former reporter for Reuters, the New York Times and the Christian Science Monitor, and he is the author of "Endgame: The Betrayal and Fall of Srebrenica, Europe’s Worst Massacre Since World War II," "Beyond War: Reimagining America’s Role and Ambitions in a New Middle East," and "A Rope and a Prayer: A Kidnapping from Two Sides," written with his wife, Kristen Mulvihill, about their experiences while he was kidnapped in Afghanistan.  and current ASU Future Security Fellow at New America.

“I have concluded there is not a ‘deep state’ as Donald Trump defines it, or that there’s a coup,” said Rohde, the author of the new book "In Deep: The FBI, the CIA and the Truth about America's 'Deep State.'"

Rohde recently presented a virtual talk as part of his work this year with ASU’s Center on the Future of War, a partnership between the university and New America, a Washington-based think tank.

“Every president complains about coming to Washington, D.C., and having bureaucrats stifle their goals," he said. "Ronald Reagan said the state department was liberal and wasn’t carrying out his agenda to counter communism. Barack Obama worried that the Pentagon was leaking troop numbers for a possible surge in Afghanistan. But no president has accused career government officials of a coup against them in secret.

“The president’s reaction, choosing to use this term of conspiracy. … It seems exaggeration.”

In his book, Rohde embarks on a sweeping exploration of the CIA and FBI scandals of the past 50 years — from the Church Committee’s exposure of Cold War abuses, to Abscam, to false intelligence about Iraq’s weapons of mass destruction, to National Security Agency mass surveillance revealed by Edward Snowden. It also investigates the claims and counterclaims of the Trump era and the spread of conspiracy theories online and on-air.

“We are deeply honored to work with David Rohde as a fellow this year,” said Daniel Rothenberg, co-director of the Center on the Future of War. “He is a legendary and courageous investigative journalist who writes beautifully and writes with originality and sensitivity about some of the most pressing issues facing our nation and our world.”

Rohde started the lecture by giving a brief history of the 1975 Church Committee, a U.S. Senate select committee that investigated abuses by the CIA, FBI, NSA and the IRS. They discovered the agencies had attempted assassinations on foreign leaders, spied on civil rights leader Martin Luther King Jr. through the orders of J. Edgar Hoover and surveilled the political activities of U.S. citizens, including Supreme Court justices, reporters and government officials.

He said the work of the bipartisan Church Committee was groundbreaking and put several key reforms in place. However, Rohde said, abuses still exist.

“The FBI and the CIA are extremely powerful agencies,” Rohde said. “They’re more powerful than ever in the digital age. More of our personal information can be collected without us realizing it.” 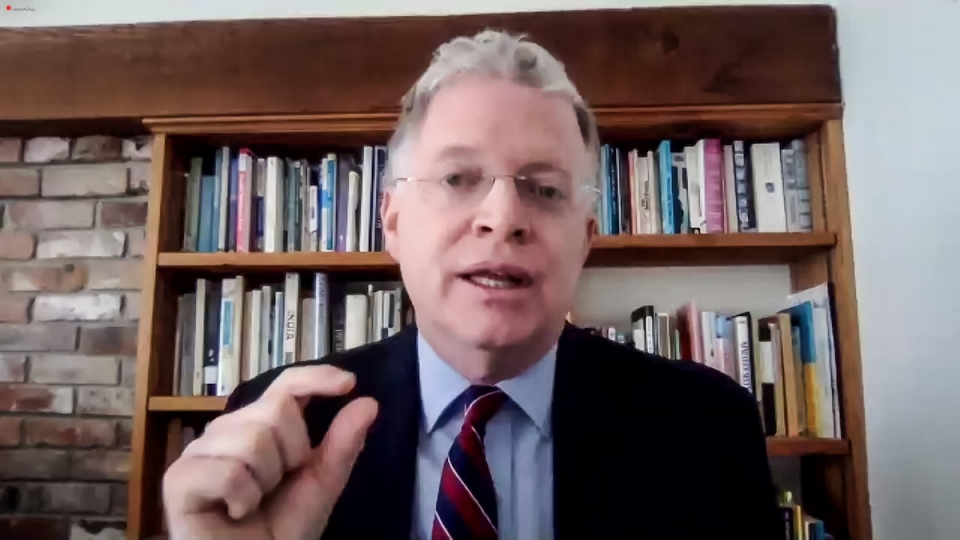 David Rohde, Pulitzer Prize-winning journalist and author of the new book “In Deep: The FBI, the CIA, and the Truth about America’s ‘Deep State,’ ” speaks about the pervasive lack of trust in mainstream media and government during a webinar sponsored by New America on April 22.

Rohde said Americans have grown suspicious of government and pointed to a poll that showed that more than 70% of respondents believe there is or may be a secret group of elected and military officials who are manipulating the system. He added the poll shows that policymakers and the public also deeply mistrust journalists. Rohde credits identity politics for the mistrust.

“Many Republicans and conservatives think that everything is political,” Rohde said. “One Democratic senator told me that he thought about 40% of Republicans in the Senate felt there’s a deep state — an administrative state — that is sort of relentlessly invading peoples’ lives and taking away their rights.”

He said Trump’s impeachment hearings saw a “lionizing” of state departments, diplomats and civil servants, and he placed some of the blame on the media.

“I see a need for commentators, and there’s lots of them these days, but some journalists just need to play it straight and present the facts,” Rohde said. “We need that more than ever.”

The big problem, he said, is that because of identity politics, not everyone can agree on the facts. He said Trump calling the media “fake news” is tipping the balance of power in his favor.

“Trump is an amazing communicator, and people who dismiss him as mentally unbalanced are underestimating him, and I think totally wrong,” Rohde said. “What he’s done is question the legitimacy of Congressional oversight and reduce Congress’ power. He’s also centralizing power by calling media 'fake news' and discrediting us as a source of information. More than any other president, he’s shifting the balance of power … at the same time he’s limited the amount of information about his own activities.”

Rohde said public distrust in government officials has spilled over to the COVID-19 pandemic, questioning the models, stay-at-home orders and health expertise. And it’s hurting us as a nation.

“I’ve read the same news reports as everyone else, and there’s a large number of Americans who don’t trust the government or think the other side is engaged in a plot and it’s all fake,” Rohde said. “I worry that this just gets more intense on both sides. People should fight for the policies they want, but we need a nimble government that is trusted and effective.”

Editor's note: This story is part of a series of profiles of notable spring 2020 graduates.Genesis Navarro is a junior and first-generation student in Arizona State University's School of Molecular Sciences who will be graduating a year early this spring 2020 semester as a biochemistry major.Navarro attended the ASU Tempe campus her first two years but is now remotely attending ASU from her home...

Genesis Navarro is a junior and first-generation student in Arizona State University's School of Molecular Sciences who will be graduating a year early this spring 2020 semester as a biochemistry major. 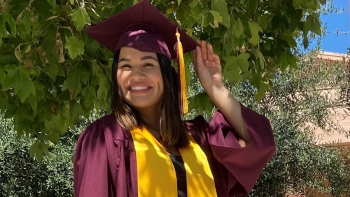 Navarro attended the ASU Tempe campus her first two years but is now remotely attending ASU from her home state of California. When she was on campus, she was involved in the Youth Life Group, a part of the Catholic center choir and joined Greek life. In her free time, she likes to skateboard, work out and spend time with her family.

Being an out of state student, Navarro was drawn to ASU because of the innovative aspect and the diversity it offered. She knew that she had great opportunities lined up for her at the School of Molecular Sciences. Through hard work and effort, she set a goal to complete her bachelor's degree in biochemistry, kept a positive mindset, took classes throughout her summer break and took on 18 to 21 credits per semester in order to achieve her early graduation desires.

It was at times stressful for her, especially being a first generation student, because she had to learn how to do a lot of things on her own. On top of that, her workload was also very heavy and at times became overwhelming.

Navarro like many other students faced a big obstacle: time management. She struggled balancing her time between her academics and social life. Being an online student comes with more responsibility and learning how to manage one's time is more difficult. Despite these challenges, Navarro has been able to find some helpful ways to balance both her social and academic life. She uses planners and calendars in a way that she found benefited her the most.

Navarro emphasized the importance of believing in herself and that everything she is doing is for her own benefit and will help her determine what is to come in the future.

Answer: I would say to put your all into school, after all, it's your priority and no one else's. What you put in will definitely determine what you get out of it, so do not take it for granted.

A: Danielle Lucero, my justice professor, has helped me uncover a passion for criminal studies. Through this class I learned that there are a lot of corrupt things in the world and we can’t do a lot to change them but we can definitely influence them.

A: My favorite place on campus was the Starbucks by the Memorial Union. I would sometimes go there just to hang out because the environment was very welcoming, lively and peaceful.

A: I am planning on attending medical school. In May I will be taking the MCAT exam and seeing where my path leads me from there. I am planning on applying for an FBI internship, since it takes up to a year for the process. Ultimately, I have come to love both biochemistry and criminal studies, so I am going to see how everything turns out for me. However, I do know that I have a lot of options to choose from with my biochemistry degree.

A: Money will not change everything … in fact, I'd say it makes things worse. One thing I would use the money for would be to distribute it out to the less fortunate students who need money to come to college. If someone has the dream to come to school but cannot because they cannot afford it, that is not fair. I would give it to students who are passionate about learning and moving forward, more first-generation students, like me.