Advances in the capabilities of 3D printing technology have been achieved at a steady pace in recent years. But most of the progress has involved the printing of relatively pliable materials.

Printing of less malleable things, particularly metal objects at the micrometer scale, has presented more of a challenge. 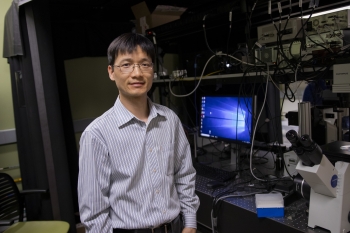 Potential solutions for each of those problems may spring from results of recent research led by Chao Wang and Yu Yao, assistant professors of electrical, computer and energy engineering in the Ira A. Fulton Schools of Engineering at Arizona State University.

Wang and Yao’s teams have developed a novel additive manufacturing technique that, unlike existing techniques, can print continuous and smooth films with high electrical and optical performance while at room-temperature and at low costs — something never done before, Wang points out.

The 3D printing process is based on optical projection, similar to playing movies using a projector, to create programmed ultraviolet light illumination in a precursor solution, which is used to catalyze a chemical reaction. The UV light triggers photochemical reactions for metal nucleation and growth.

“Projectors play movies made of multiple frames of images. Slightly different from movie projectors, we need to use only a single color from the light, which is ultraviolet, to print a single image through the photochemical deposition,” Wang said. “The projected patterns in light intensity are faithfully replicated in the metal patterns, and displayed as a portrait of complex metallic structures.”

The same process is also excellent for printing high-quality metal structures made of noble metals such as gold, silver and platinum and has the added attractions of enabling low-cost manufacturing of a variety of metal materials. As a proof-of-concept demonstration, the team printed the ASU mascot “Sparky” and the ASU pitchfork and sunburst logos in platinum, gold, and silver together on a single piece of glass (see illustration below). 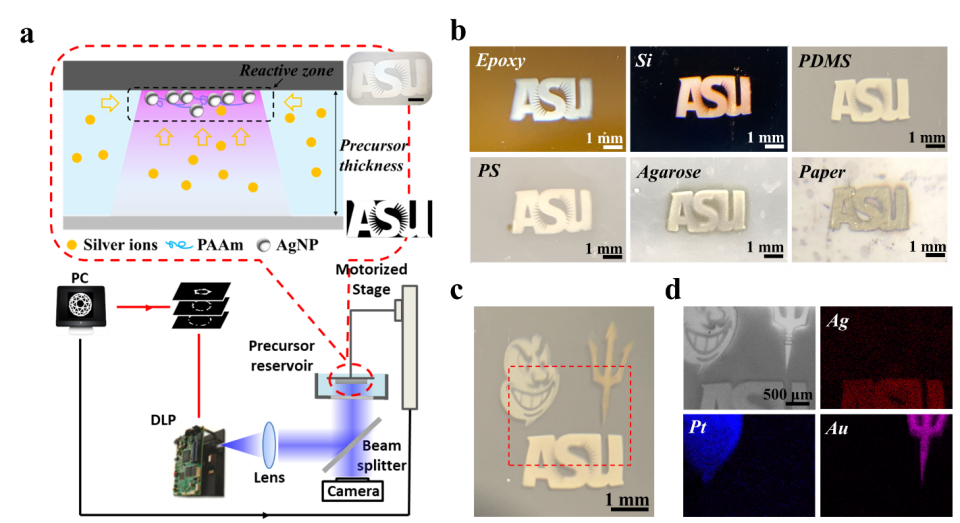 The illustration from “Printing continuous metal structures via polymer-assisted photochemical deposition” in the research journal Materials Today depicts key phases of a new method for 3D printing metals at the micrometer scale. The technique developed by a team of Fulton Schools electrical engineering researchers produced improved high-performance metals for a broad range of technological applications. As an example, the team printed metal on a variety of different materials, including glass, silicon, plastics, gel and paper. They also printed the ASU mascot “Sparky,” the ASU pitchfork and sunburst logos in platinum, gold and silver to prove the versatility of this technique. Illustration courtesy of Chao Wang/ASU

“In principle, we can engineer the optical properties of such metal to produce color images,” Wang said.

The process is versatile, he said, because it enables flexible designs of the printed patterns for broad range of applications in microelectronics, photonics, energy and health care.

An important advantage offered by the research team’s new additive manufacturing process is that it can be done at room temperature, Wang says. Current manufacturing processes use high temperatures, which significantly limit their capacity to print on materials that are susceptible to heat, particularly the kinds of materials typically used in flexible electronics, robotics and biosensors.

In contrast to other 3D printing techniques, the research team added a small amount of polymer with many ligands (groups of chemicals) into a precursor solution at the start of 3D printing process. The ligands interact with synthesized particles to overcome their electrostatic repulsion, which is useful in stabilizing particles during synthesis but prevents them from connecting into a smooth film, Wang says.

At this point, the polymer acts as a chain that connects synthesized nanoparticles, and thus makes the final product a connected and continuous film rather than one riddled with small holes that separate the particles and cause considerable electrical and optical energy loss.

“In this way, we eliminate gaps between nanoparticles, something not done by other technologies,” Wang said. “The polymer acts as a super glue that tethers the nanoparticles together through the polymers’ chemical reactions with the metal particles.”

Importantly, he emphasizes, the method — using the technique described above and dubbed as polymer-assisted photochemical deposition — produces materials with high electrical conductivity and optical reflectivity.

For microelectronics and flexible electronics, Wang says, the high conductivity of metal materials produced by the manufacturing method can provide a higher current at the supplied voltage. Therefore, less energy is lost on the metal interconnections and more energy can be allocated to critical parts of the devices, such as displays, memory and central processing units for computers, smartphones and tablets.

In solar energy applications, for instance, highly reflective metal films are needed to focus sunlight onto a collector that stores energy. The reflectivity of the metal film has a significant impact on the optical efficiency of the collection of sunlight, and thus on the system’s power output.

As another example of the applications, Yao points to optical devices, such as mirrors and filters that require highly reflective metal coatings. Thermal shields, for instance, that are widely used in aerospace applications, need thin film reflective foils that will provide thermal insulation for satellites and manned and unmanned spacecraft by reflecting the incoming radiation from the sun. 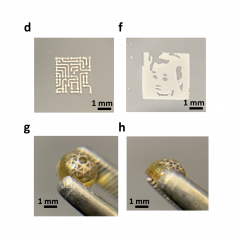 The series of graphic images demonstrates the range high-quality 3D printing of complex microstructures and 3D patterns enabled by the research of Fulton Schools electrical engineers, including printed microstructures for electronic circuits, a portrait of a toddler and two images of a 3D silver network printed on top of a hemisphere.

In addition, Yao emphasizes, the manufacturing technique can also enable making 3D microscale or even nanoscale optical structures on a large scale with low cost, which is highly desirable for implementation of ultra-compact, high-performance metamaterial and metasurface devices for a broad range of electromagnetic spectra ranging from visible light to radio frequencies.

“Similar to the movie-playing concept, the printing process can be repeated multiple times with a different image in each printing step, thus building up more complex structures, such as 3D structures on curved surfaces,” Yu said. “This could enable creating on-chip integrated 3D devices that are otherwise difficult to make, including 3D inductors for technologies using radio frequency capabilities.”

Details are provided in the recent paper published in the research journal Materials Today.

Wang’s and Yao’s co-authors are Zhi Zhao and Jing Bai. Wang and Yao teach in the School of Electrical, Computer and Energy Engineering, one of the six Fulton Schools. Zhao was until recently a postdoctoral researcher working with both Wang’s and Yao’s research groups. Bai is an electrical engineering doctoral student who works with Yao.

Bai was involved in the design, fabrication and characterization of printed metal films, which is important to understanding the electrical performance of the films.

The research was supported by the National Science Foundation, or NSF, and by startup funding provided to Wang and Yao by ASU.

Based on their team’s results, the NSF is now supporting Wang and Yao on a project to develop higher-resolution silver-printing technology for applications in functional electronics and photonics.

From an online biochemistry degree to chasing a PhD

Editor's note: This story is part of a series of profiles of notable spring 2020 graduates.Paul Turack is graduating with a degree in biochemistry from the School of Molecular Sciences. This year he was awarded the Distinguished Biochemistry Merit Award, which is presented to a graduating senior in recognition of an outstanding academic record in a biochemistry degree. As an online student livin...

From an online biochemistry degree to chasing a PhD

Paul Turack is graduating with a degree in biochemistry from the School of Molecular Sciences. This year he was awarded the Distinguished Biochemistry Merit Award, which is presented to a graduating senior in recognition of an outstanding academic record in a biochemistry degree. As an online student living in St. Kitts Island, Turack has done an amazing job keeping up with his studies and work. 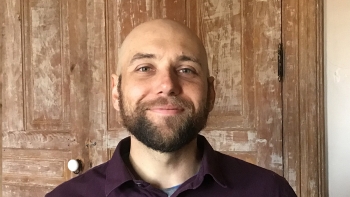 Paul Turack is graduating with a degree in biochemistry from the School of Molecular Sciences. Download Full Image

School of Molecular Sciences clinical assistant professor Ara Austin had this to say: “Paul is a dedicated student who overcame many obstacles to complete his degree in biochemistry at ASU. I am always impressed by Paul's ability to find a solution when all hope seems lost. For example, while living on St. Kitts Island, he managed to find one biochemist living there to gain the necessary research experience to pursue graduate school in the future. Students like Paul who have the persistence are the ones who later succeed in research, and I am excited to see what the future holds for him.”

Turack is a part of the School of Molecular Sciences online biochemistry program, the nation’s first online biochemistry program. Like many students who are pursuing their degree online, he has put in a tremendous amount of time and dedication to his studies. Although learning in a nontraditional classroom setting may come with difficulties and surprises, Turack has learned how to be a successful online student.

One challenge he faced as a rural online student was limited access to the internet. When the public libraries back home were shut down in response to COVID-19, it made it difficult for him to find adequate access to the internet to complete coursework. He ended up having to rent out a hotel room in the nearest city to be able to take his online exams. Though it was not the ideal situation for him, he figured out how to tackle the issue head on and went out of his way to make sure his work was complete. There is no doubt that this hardworking graduate will continue to thrive in his future endeavors with his great resilience and skills.

Answer: I chose ASU because ASU offers a fully online biochemistry program. I was able to conveniently complete my degree while living overseas.

Q: The best piece of advice you’d give to those still in school?

A: Be organized. Making lists of what I needed to do and when helped me immensely to get through school.

A: I am a nontraditional student. I taught philosophy and ethics courses for several years at the college level, and then I decided to radically switch fields and study biochemistry at ASU. The switch was instigated by recognition of a dearth of academic positions in the humanities, and few to no opportunities in the private sector for philosophers. Going back to college after a lengthy interim can be a challenge due to the concepts and methods one may have forgotten, but it certainly is doable!

A: I plan on studying biochemistry at the graduate level and am ultimately aiming at earning a PhD in biochemistry. I have an MA in history of philosophy and have already taught at the college level, but I feel like there are more opportunities for biochemists than philosophers in today's job market.

A: Dr. Austin is a polymath. She was one of my organic chemistry instructors, she coached me on graduate school options, helped me to find research opportunities in ASU's labs, and lately helped me to resolve some internet access issues as a rural student previously reliant on public libraries for schoolwork. At her insistence I looked more into mobile hot spots and I honestly don't know that I'd be finishing my degree right now if it wasn't for her insight.