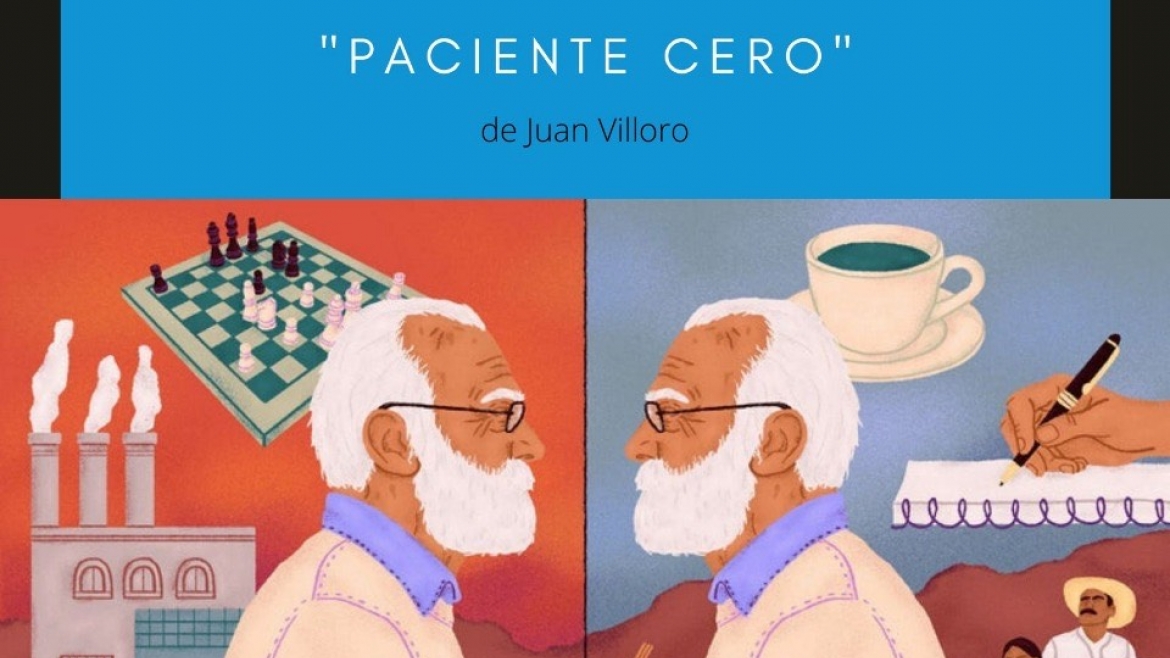 The story lyrically describes a future in which Mexico — at the behest of China and with the help of a populist leader — has been transformed into a giant recycling plant for U.S. waste. It explores mind control, authoritarianism, bio-surveillance, the resilience of indigenous cultures, and, ultimately, “the disorder of the truth.”

Andrés Martinez, the editorial director of Future Tense and a professor of practice at the Cronkite School who oversees ASU’s Convergence Lab events in Mexico City, first met Villoro in the fall of 2018, when the Universidad Nacional Autónoma de México invited the writer to moderate an event on the 50th anniversary of the Mexico City Olympics co-hosted with ASU’s Global Sport Institute. Martinez subsequently invited the author — with fingers crossed, he admits — to write a story for Future Tense Fiction.

The result was “Paciente Cero,” published last month on Slate, and simultaneously in Spanish in Mexico’s prestigious Letras Libres magazine, a publishing partner of Future Tense.

On Wednesday, Villoro, currently a visiting professor at Stanford’s Center for Latin American Studies, discussed the story — as well as how our imaginations shape our realities — in a Convergence Lab webinar with Ed Finn, director of ASU’s Center for Science and the Imagination and co-editor of Future Tense Fiction. The webinar was moderated by Martinez. 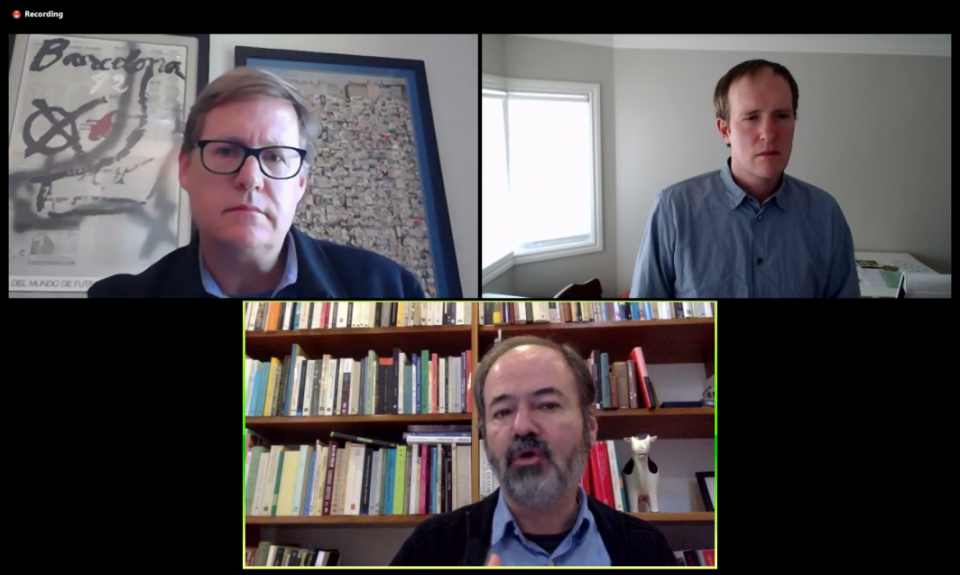 The Center for Science and the Imagination was born out of a need to reimagine our relationship with the future, recognizing that “stories are the building blocks we use to make the future happen,” Finn said, an idea which dovetails with the plot of Villoro’s story.

The center's mission and the Future Tense Fiction project seek to counter, at least in part, the dominance of dystopian narratives about the future with narratives that make room to imagine progress, or what Finn calls “thoughtful optimism.” This doesn’t imply walking around with rose-colored glasses, but it does call on us to imagine a more complex relationship with the future.

“When we tell stories, we are trying to convey new possibilities,” Villoro said.

We must not only put to paper our fears for the future, but also our hopes, he said, “inventing, at the same time, possibilities of resistance and of well-being.”

The question to ask is, “How are we going to feel better in the future?”

This question is met with a complex answer in “Paciente Cero,” in which, Villoro explained, “the algorithm of inconformity has disappeared” through social control technologies leveraged by an authoritarian regime. This, he said, presents grand problems for the characters in this imagined future.

“Error has been the great stimulus of the human species,” he said. “He who dares to think in a different way is capable of imagining.”

The story is riddled with symbolism that opens doors into complex narratives about Mexico’s past and present, and the coexistence of tenses in millennial civilizations. There is the basketball court “presented as the ‘playground of the world’” that harkens back to the ball games played by precolonial indigenous civilizations, the baseball cap “promoting a vanished political party,” and the vanilla ice cream turned from yellow to red.

“It’s important to understand that in everyday spaces we can find a door to the past,” Villoro said. In Mexico, these doors often open to deep passages with “very important solutions for the future,” he noted.

The story is also a story of love, Villoro said, itself a sort of “inheritance” for the 91-year-old narrator’s partner, Ling, who, the story’s narrator explains, “accompanies me with the shifting constancy of the phases of the moon ... Our lives crossed like two contrails in the sky. I’ve been captivated by this phenomenon multiple times: One white slipstream begins to dissolve overhead as another passes through it, giving it new meaning.”

The lesson of this element of the story is a big one. “To make mistakes,” Villoro said, “has to do with the art of love.”

The story, which features an autocratic populist leader — the “Founding Hero” who “has been governing so long it’s no longer worth tracking the time” and who calls his enemies “reckless,” “irrelevant,” “lunatics,” “egomaniacs,” and “chancers” — could be interpreted as a critique of several contemporary leaders. But it’s also a sort of self-critique, Villoro said.

As writers, we often help those leaders advance a certain narrative of themselves and their visions for the future, becoming “accomplices” in the “construction of a parallel reality” of unchecked power.

“One of the lessons of the human experience is that you cannot address the future if you don’t have a sense of the past and a feel of the present,” Villoro said. “This intermingling of tenses is, I think, the most rewarding thing of literature. I think that any writer that tries to invent new worlds is also trying to convey a mirror of his own world and his own present.”

In our own present, facing a pandemic that we can’t yet see the end of, imagination of the type presented in “Paciente Cero” is crucial.

It is through this sort of imagination, Finn explained, that “we escape the island of individual consciousness” and come to place ourselves in others’ circumstances, developing empathy. Our present moment should also remind us of “the importance of speaking for the future,” Finn said.

Our most significant task in all this, according to Villoro, is “to invent the common sense of the future.”

It is something we’re better off inventing together.

Graduate ‘found another family in ASU’

Editor's note: This story is part of a series of profiles of notable spring 2020 graduates.Juan Laguna wants to make his family proud.“I always wanted to find a way to help them,” said Laguna, a political science and history double major and soon-to-be graduate from The College of Liberal Arts and Sciences at Arizona State University. “The only real way to do that is to study hard and get ...

Does the Super Bowl result in an increase in human trafficking?

Graduate ‘found another family in ASU’ 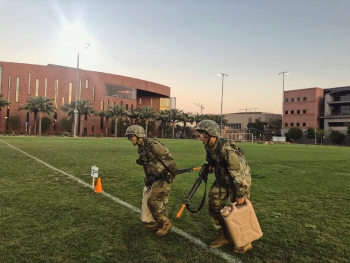 “I always wanted to find a way to help them,” said Laguna, a political science and history double major and soon-to-be graduate from The College of Liberal Arts and Sciences at Arizona State University. “The only real way to do that is to study hard and get good grades and a good job. I think I might have accomplished that goal for now, but I’m still looking for ways to help them.”

This May, Laguna won’t just be graduating from the School of Politics and Global Studies and the School of Historical, Philosophical and Religious Studies. He’ll also be one of the first graduating members of ASU’s College Assistance Migrant Program (CAMP), which provides academic and financial support to students like Laguna who are from migrant and seasonal farmworker families.

The CAMP Scholars Project, part of The College’s School of Transborder Studies, is federally funded through the U.S. Department of Education’s Office of Migrant Education.

“Joining the CAMP Project was one of the best decisions I ever made in college,” Laguna said. “Everything was about helping each other, and finding ways to grow and finding opportunities to take. I was also able to attend a lot of leadership conferences and events, and for the first time ever I flew from Phoenix to California. That was my first time in an airplane, ever.”

Laguna answered some questions about his time at Arizona State University.

Question: Why did you choose to go to ASU, and what made you pick your major(s)?

Answer: I picked ASU because I wanted to be part of the ASU Army ROTC program, one of the best programs in the nation. And I wanted something bigger — I grew up in a small border town and I wanted to experience a big city like Phoenix, Arizona. I picked political science and history as my majors because I wanted to make a change in the near future. I wanted to understand the government's laws and policies. I grew up witnessing all the injustices perpetrated on farmworkers and minorities in the U.S. Also, I thought political science was the best fit for me to get into a law school after I served four years in the U.S. Army.

Q: Did you experience any obstacles along your way either in coming to ASU or while here? If so, how did you overcome them?

A: One of the biggest obstacles I faced was being away from my family. Since I was little, I spent a lot of time with them so being cut off from them was hard. Also, I really struggled with the fear of not succeeding. I always wanted to have good grades, so that was a big concern for me. But I managed to overcome these obstacles by joining the CAMP Scholars Project. I got to hang out with other CAMP scholars and with my ROTC buddies. They were always there for me — they helped me cope. I would say I found another family in ASU.

Q: How has The College prepared you for success?

A: The College gave me specific skills to succeed in life. One big one was critical thinking, and learning to be responsible for myself and others. And being at The College made me more interested in politics and my field of study. I’m grateful for that, because I know I’m going to use everything I learned in the future.

A: In my freshman year, I learned from my mentor, Professor Carlos Velez-Ibanez, to be proud of my heritage. He told me to try and do the best for my peers, my family and my community, and to always put my interests aside. That really changed my way of thinking about a lot of things.

A: Stay focused and work hard — you can always become a master of your craft. It’s important to try to be the best you can be, even when it comes to something like your job. Ultimately, your job is an extension of yourself and your work ethic.

A: I spent a lot of time in the School of Transborder Studies’ computer lab. I was there with my CAMP scholar friends, just doing homework and hanging out. That was always the place to go, even during finals week. And I also love “A” Mountain, mainly because I love running a lot.

A: I’ve been in the Army ROTC program at ASU for the last four years. So after college, I’m going to begin training in the Basic Officer Leaders Course in Fort Sill, Oklahoma. After four years of service, I’ll retire and hopefully go to law school — I’d really love to give back to my community.