One of this year’s award recipients, Silvie Huijben, assistant professor at ASU’s Center for Evolution and Medicine, has found that teaching and mentoring students has brought a new sense of purpose to her work. 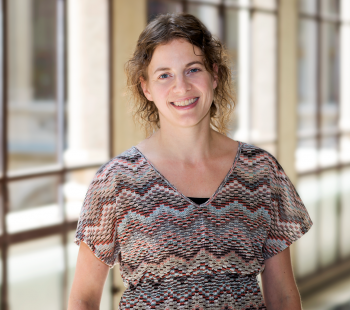 "Most knowledge has an expiration date, while critical thinking is needed for the rest of one’s life,” Huijben said. “I strive to teach my students how important the role of evolution is in many aspects of their lives. I aim to inspire them to ask big questions about the world around them. My ambition in teaching is to plant the seed of questioning — a practice that they will continue to use outside of the classroom.”

Spending years using evolutionary biology to study malaria around the globe, Huijben has traveled everywhere from Kenya and Barcelona, Spain, to Scotland and Pennsylvania. Today, she continues this work in her position at ASU’s School of Life Sciences and is passionate about not only sharing her expertise with her students, but fostering a new generation of critical thinkers.

Huijben came to ASU in February 2018, and began teaching her first course in the spring 2019 semester. In a short time, she’s managed to have a positive impact on her students through her creative approach and thoughtful instruction. Over the past year, Huijben has continued to improve upon her teaching skills through obtaining a certificate in effective college instruction, joining a School of Life Science’s reading group on teaching practices and attending a workshop on inclusive and effective college science classrooms in San Francisco.

In her evolution and advanced evolutionary medicine courses, Huijben strives to inspire students to think about evolution in their everyday lives and future careers, while creating an environment where they are encouraged. She also emphasizes the importance of peer- and self-learning. Brook Jensen, an evolutionary biology PhD student who has worked with Huijben in a variety of capacities including as a student, mentee and teacher’s assistant, urged Huijben to apply for the Centennial Professorship Award. 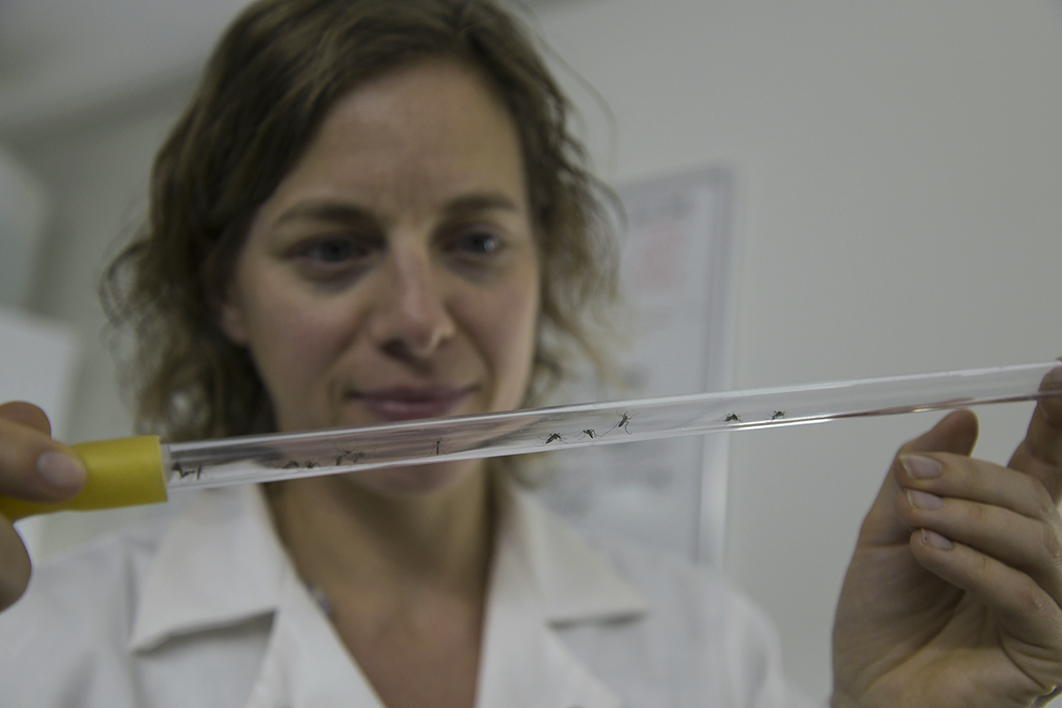 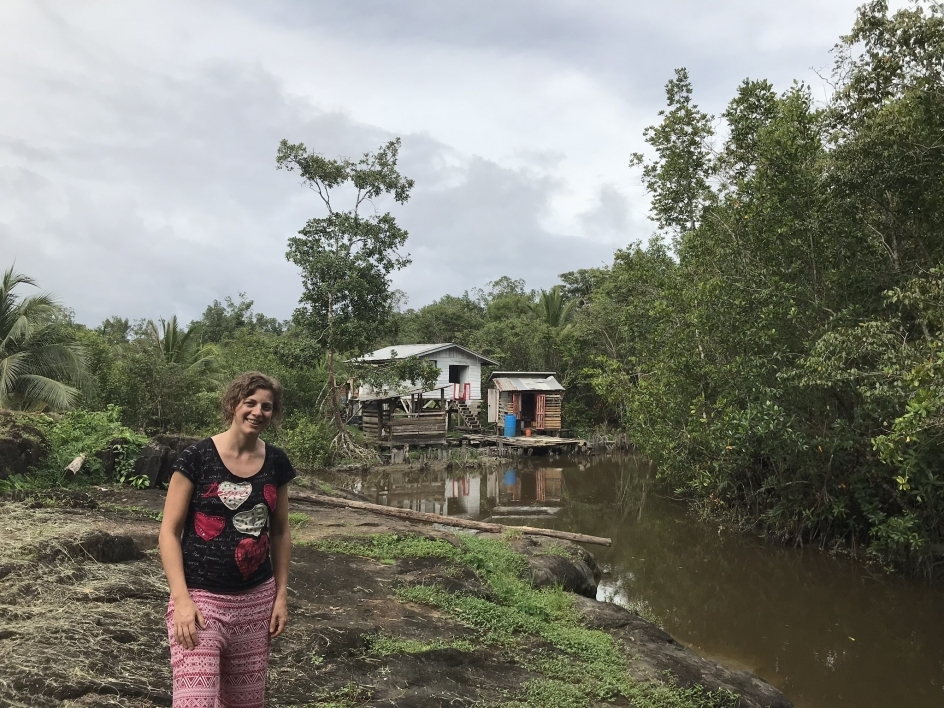 Silvie Huijben's work in evolutionary biology to understand malaria and antimalarial drug resistance has taken her around the globe, including to Guyana. She is passionate about not only sharing her expertise with her students, but fostering a new generation of critical thinkers.

“Dr. Huijben has always made me feel important and valued and that has really helped me to grow and feel confident in my decision to pursue grad school,” Jensen said. “She supports her students inside and outside the classroom and always encourages people to look at things from a different perspective. She’s had a very positive impact on me and I really look up to her. Professionally, she's been a great example to me for learning how to ask good questions and how to be a good scientist and mentor while managing school, academics, lab work and a personal life. She challenges students in good ways to help them think more critically and (be) open-minded about science, and all the while she's always been positive, supportive and consistent. She's not afraid to implement new activities or strategies in the classroom to keep students engaged and learning in a new way.”

The award includes a cash prize of $5,000 and an additional $5,000 to be used for the benefit of the students in classroom instruction and teaching innovation. Huijben plans to use these funds to hire a senior graduate student who would aid in the creation of practice exams that would be freely available to all students to practice harder problems of applying evolutionary biology concepts and analyzing real-world problems. This is a resource that has been requested by students, and something that Huijben has attempted to undertake herself.

She also plans on using the funds to expand public outreach activities by working with ASU’s Mary Lou Fulton Teachers College to develop a K–12 lesson plan focusing on mosquitoes, insect life cycles and vector-borne disease epidemiology. The funds will go toward handheld digital microscopes and tablets that can be used safely and easily in the K–12 environment and at public outreach events. Huijben feels that creating this opportunity would give students ownership of their role as community advocates in disease prevention.

Huijben said she feels humbled to have been selected, and hopes to encourage her peers and other educators to never stop learning.

“Winning this award is an amazing honor and recognition. I only have a little over a year of higher education research experience, but I believe that in this year I have demonstrated that good teaching is a skill anyone can learn,” Huijben said. “I aim to be a role model to my peers by demonstrating that simple changes in your teaching approach don’t need to require massive time investments or drastic restructuring of the course. And just like I tell my students, learning and questioning never stops, the same goes for me as an instructor as well.”

Editor’s note:  This story is being highlighted in ASU Now’s year in review. Read more top stories from 2020.A new word will have to be coined to describe Zhihao Chen. Is he a farmer if there’s no farm?Chen, a chemistry instructor at Arizona State University, has created a new system for growing food. Forget farm to table. Chen has skipped the farm entirely.In a time when grocery stores a... 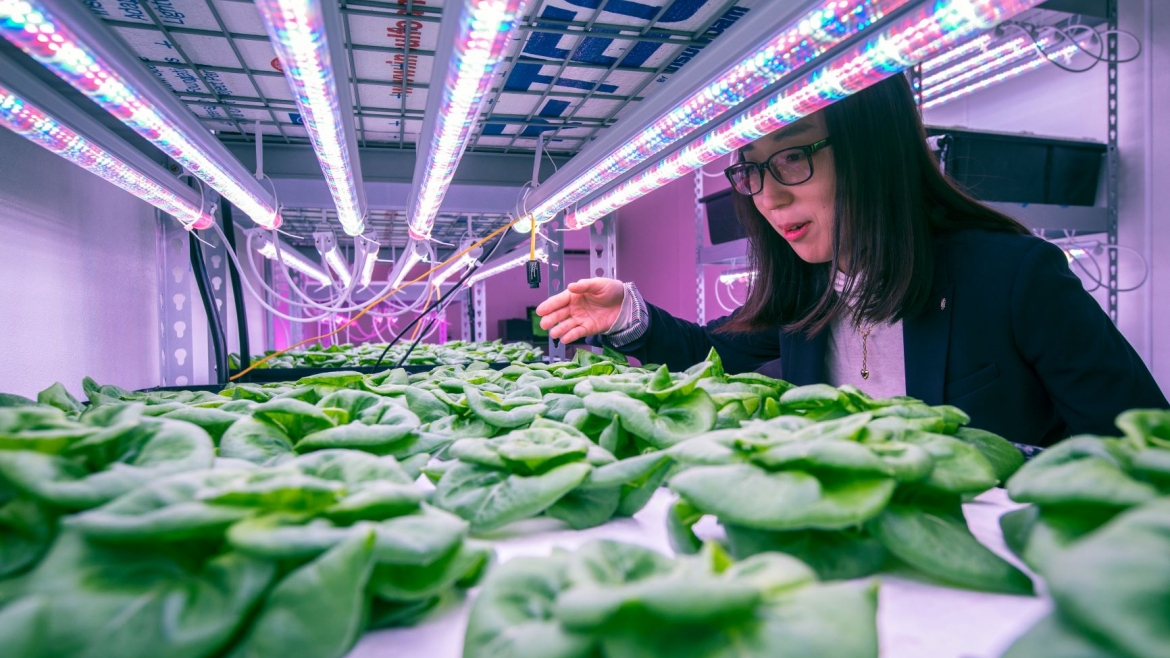 Growing up: Welcome to vertical farming

A new word will have to be coined to describe Zhihao Chen. Is he a farmer if there’s no farm?

Chen, a chemistry instructor at Arizona State University, has created a new system for growing food. Forget farm to table. Chen has skipped the farm entirely.

In a time when grocery stores are struggling to keep shelves full, Chen’s vertical farm could sit in the corner of a market parking lot, sending lettuce grown from a completely organic closed system to the shelves in as little as three weeks.

The system, which Chen describes as "cleantech," is contained within two standard shipping containers. One 160 square foot space contains a system for breaking down food waste — anything from potato peels to rotten carrots to egg shells — and transforming it into fertilizer and methane gas. It’s capable of processing 2,000 pounds of food waste per day – the amount an average grocery store tosses out daily.

The second container hosts shelves of produce grown in a carefully-controlled environment. 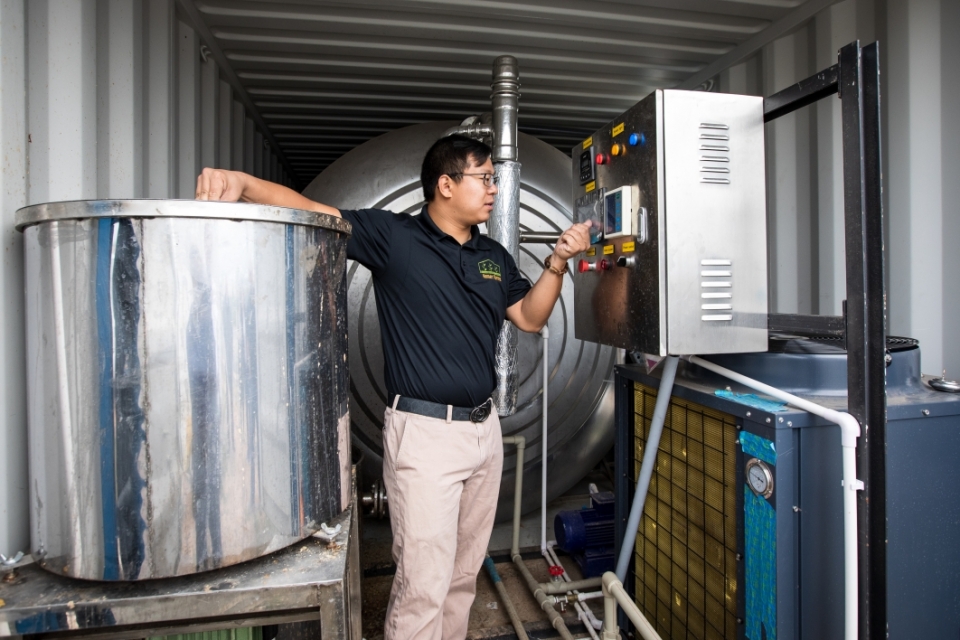 Zhihao Chen, inside the digester container, talks about the vertical farming system he and his colleagues have developed at the Environmental and Resource Management lab, a part of Arizona Center for Algae Technology and Innovation (AzCATI) on the Polytechnic campus. Photo by Charlie Leight/ASU Now

The 320-square-foot space can produce 1,200 heads of lettuce per month — the equivalent of two acres of farmland production. Traditionally, it takes lettuce 30 days to grow to maturity. Chen’s system produces a mature head in three weeks. It also doesn’t depend on climate. And the system uses 95% less water than traditional agriculture.

This could work on an island, in space, at sea — anywhere.

Chen came up with the idea two years ago. An instructor in the College of Integrative Sciences and Arts on ASU’s Polytechnic campus, he assembled a team to work on the project and created a startup called Homer Farms.

He takes food waste from the campus and grows lettuce, which goes back to ASU Dining Services.

“We want to achieve zero waste at ASU,” Chen said. He plans to expand operations to the other campuses. He is also in talks with grocery chains Fry’s and Kroger right now. Fry’s is interested in putting the system in their parking lots to use their food waste.

“The customer can actually see what’s going on,” he said. No pesticides, no chemicals or artificial fertilizers are used. It’s completely organic.

And, he adds, “You pretty much don’t emit any greenhouse gas emissions.” 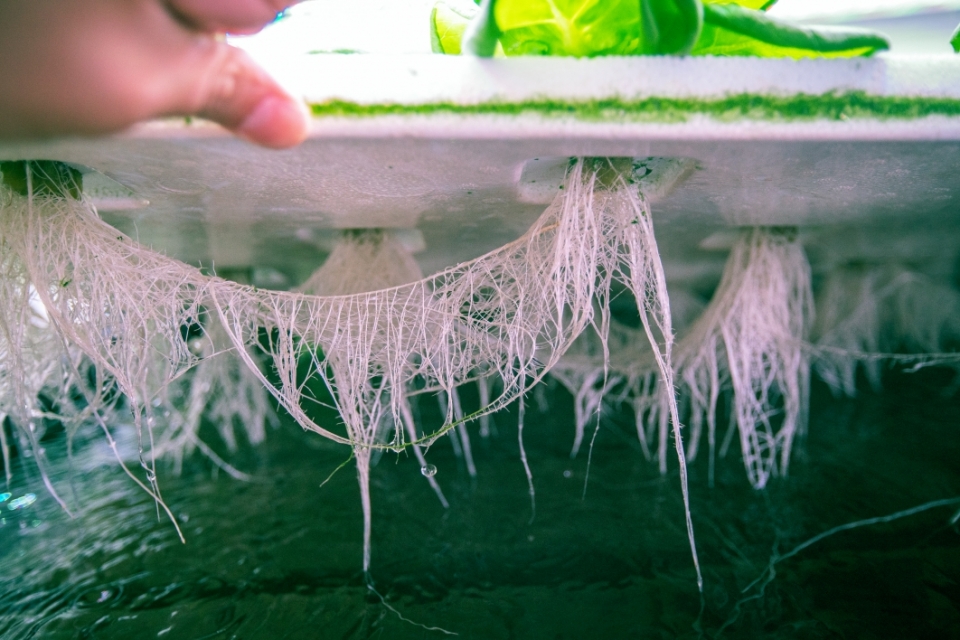 A lattice of roots float in the fertilizer brine in the racks for the week-old butterhead lettuce. Photo by Charlie Leight/ASU Now

The process is called anaerobic digestion. Certain bacteria under a certain temperature with the proper pH will break down the carbon chain in food waste and feed the carbon into the biogas. (Biogas is a mixture of CO2 and methane.) You can combust the methane for energy to run the unit and heat it to keep growing conditions optimal.

It saves long-distance transportation. How about using this in a major metropolitan area like New York or San Francisco?

“We’re able to produce on-site, so the lettuce doesn’t have to be transported from Arizona to New York,” said Chad Geelhood, assistant director of Environmental and Resource Management. “We cut down energy costs, we cut down greenhouse gas emissions, and we make the city more resilient.”

Right now, with the supply chain overwhelmed, “if you have something like that on-site, the city can self-sustain,” Geelhood said. “You don’t have to worry about waste and the food will be supplied on time."

“If you air condition the container, it can be year-round in a New York environment,” Geelhood said. “Here we don’t have to add as much heat because we’re in the desert.”

The system can grow any type of vegetables. 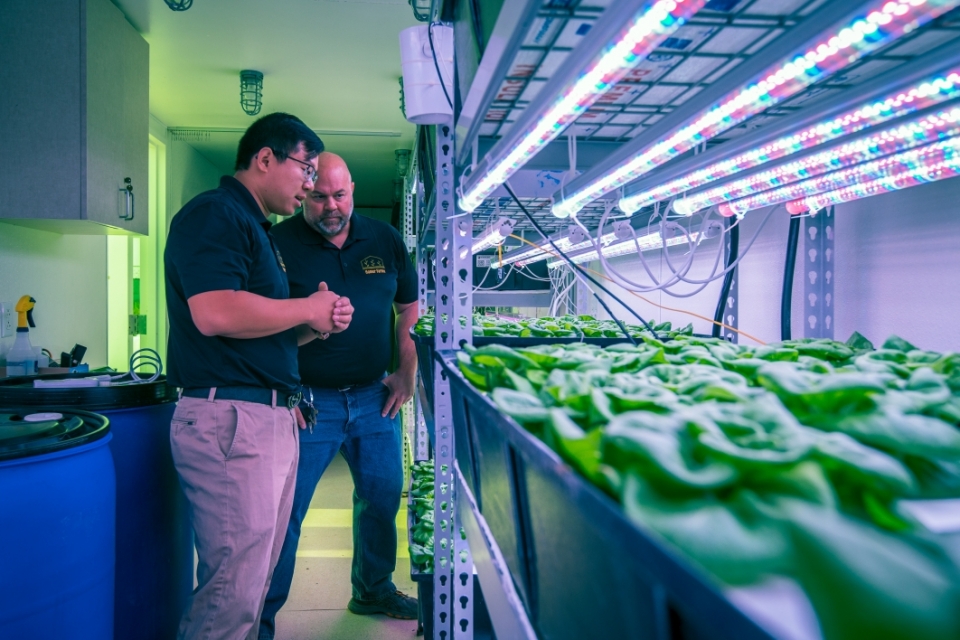 “Lettuce and leafy greens are a good target because they’re high-bulk and it costs a lot to transport them relatively, but also growing them in a closed space makes them more nutritious as well,” Weiss said.

The fertilizer is super-concentrated and has to be diluted. Inside the grow container, temperature, humidity, light intensity and plant temperature are all intensely monitored.

“In that way we can predict the quality we need,” said Yujin Park, an assistant professor in the College of Integrative Sciences and Arts who researches what types of light wavelengths are best for growing. Conditions can be optimized for different crops.

Homer Farms is currently under incubation at University of Arizona Center for Innovation.

Top photo: Assistant Professor Yujin Park checks the week-old butterhead lettuce plants at Environmental and Resource Management (ERM), a part of Arizona Center for Algae Technology and Innovation (AzCATI) on the Polytechnic campus on March 26, 2020. The plants will be ready for harvest at three weeks. With the goal of creating a circular economy, the lab takes food waste from the university's food services and turns it into a fertilizer by way of a digester. The fertilizer is diluted and used as a hydroponic medium to grow lettuce, which is then returned to the food services. Photo by Charlie Leight/ASU Now