Arizona State University's spring 2020 commencement and convocation ceremonies will have many of the familiar feelings as past commencements: Graduates will hear their name called; relatives will smile or cry, or both; and the moment will mark the end of one chapter and the exciting start of another.

And though many graduates will likely still decorate their caps and turn their tassels, this commencement will be unique. The May 11 event will be an online celebration, a break from tradition forced by the spread of the novel coronavirus that is making its way around the globe.

In addition to the virtual ceremony on May 11, graduates will have the opportunity to attend future ceremonies in person if they choose, including the December 2020 or spring 2021 ceremonies.

Colleges and schools will also host virtual convocation ceremonies for their graduates and highlight their Outstanding Graduates for spring 2020.

All ceremonies will be on YouTube where viewers can watch, participate and experience the event together.

“This is an important event for ASU to recognize student achievement,” Provost Mark Searle said. “It is the culmination of hard work, fulfillment of personal commitments and a celebration of significant accomplishments by our students.”

“This decision was inevitable considering the life-altering conditions we are facing, but it is still an outcome we wish we could avoid,” he said. “By our nature though, ASU is an optimistic community. We want students to know that we believe that the future will be better and we will not allow our current circumstances to stop us from celebrating your success.”

If students choose not to take part in any ceremony and all university academic requirements are met, graduating students will receive their diplomas in the mail.

“As we push forward to make this happen, I am mindful of the disappointment that graduating students and their families likely share in this moment,” Crow said. “As a first-generation college graduate who came from a family where college graduation was a life-changing achievement, I can appreciate the anticipation of reaching this defining milestone. This will mean celebrating our graduates in a different way, but we will be celebrating our graduates.”

The virtual ceremony will include:

The May ceremony will also highlight a diverse spring 2020 class that includes more than 18,000 graduates.

Arizona Gov. Doug Ducey said Thursday evening that the next 60 days will be rough for all Arizonans but assured them there would be plenty of food, water and supplies to get the state’s 7 million population through the COVID-19 pandemic.“This has been a very tough month in Arizona, and my heart goes out to everyone who has been affected by this disease, and that’s basically everyone because... Arizona Gov. Doug Ducey said Thursday evening that the next 60 days will be rough for all Arizonans but assured them there would be plenty of food, water and supplies to get the state’s 7 million population through the COVID-19 pandemic.

“This has been a very tough month in Arizona, and my heart goes out to everyone who has been affected by this disease, and that’s basically everyone because no one is unaffected in our state,” Ducey said. “Arizona is not in crisis mode, but it’s best to be ready.”

Ducey appeared at a live town hall hosted at the Arizona PBS studios, in partnership with the Arizona Broadcasters Association, at the Cronkite School of Journalism and Mass Communication on Arizona State University's Downtown Phoenix campus. The commercial-free broadcast aired on more than 50 TV and radio stations throughout the state to inform Arizonans how they can access important resources and get assistance where needed.

“Basic information about COVID-19 is everywhere, but our goal is to cut through the clutter, eliminate any misinformation and let everyone in Arizona be part of an important conversation with our state leaders,” said Chris Kline, Arizona Broadcasters Association president and CEO, in a prepared statement. “Arizona broadcasters are coming together in these unprecedented times, and we hope it’s a model for everyone in Arizona to do the same.”

The level of the cooperation among these stations to allow Arizonans to be a part of a shared dialogue was particularly noteworthy, said Christopher Callahan, dean of the Cronkite School and CEO of Arizona PBS.

“All of the broadcasters of Arizona have gotten together and put their competition aside to come together for the people of Arizona,” Callahan said the day before the event. He added that their singular purpose was to help distribute as much up-to-date information on the coronavirus as possible in real time to the public.

Journalists Ted Simons and Carey Peña moderated the hourlong discussion, combing through 5,000 questions submitted by the public, formulating pointed ones of their own, and in the more testy moments, holding Ducey’s feet to the fire.

The governor answered — and at times deftly side-stepped — a wide-ranging variety of questions dealing with the spread of the pandemic. That included health care, testing kits, food and medical supplies, the economy, education, compliance with the law and shelter-in-place options. He made one thing clear: He was going use whatever authority needed to defeat the virus.

“In a declaration of emergency there are an incredible amount of tools and authorities that are granted governors,” said Ducey, who earlier this week issued a statewide stay-at-home order that encourages aggressive social distancing. “I will use every tool in the toolbox and escalate as necessary to navigate Arizona through this.”

But some, including Phoenix Mayor Kate Gallego, had called Ducey’s order insufficient, stating that nail and hair salons and golf courses were not essential businesses. Ducey countered Thursday that his order has teeth and if law enforcement deems members of the public aren’t acting in accordance, they could be arrested for a Class 1 misdemeanor, which carries a fine of up to $2,500 and up to six months in jail.

Ducey did not want to dwell so much on the negatives and said his attention is aimed at stopping the spread of the virus and what the state is currently doing for residents.

“We’re focused on public health right now in the state of Arizona,” Ducey said. “We’re doing our best to communicate that this is a disease and virus that knows no border. It knows no class, background or distinction.”

That is why, he said, the state is doing its best stay ahead of the curve in terms of identifying hospital beds, intensive care units, ventilators, respirators, surgical masks, medical supplies — and even morgue space. He said they’re looking at closed schools, hospitals and large fields if cases rise or spiral.

As of Thursday, almost 1,600 Arizonans have tested positive for COVID-19, which has resulted in 32 deaths.

Arizona initially was lagging behind in terms of testing people for the virus, but now it is starting to catch up. And that’s vital, Christ said Thursday evening.

“As a public health official, I love data and I want to get as much data as possible,” said Christ, who said that approximately 23,000 Arizonans have been tested. She added that the state’s priority is to test frontline workers first — nurses, doctors, health care workers and first responders.

Ducey said he also has been working closely with the Arizona National Guard to help him traverse these complex issues. McGuire said Arizona’s National Guard counts a membership of 8,000 strong.

“Our role is to be in support of the incident commanders, manage crisis and sustain the food and water supply,” McGuire said. “We take our lead from him (Ducey).” 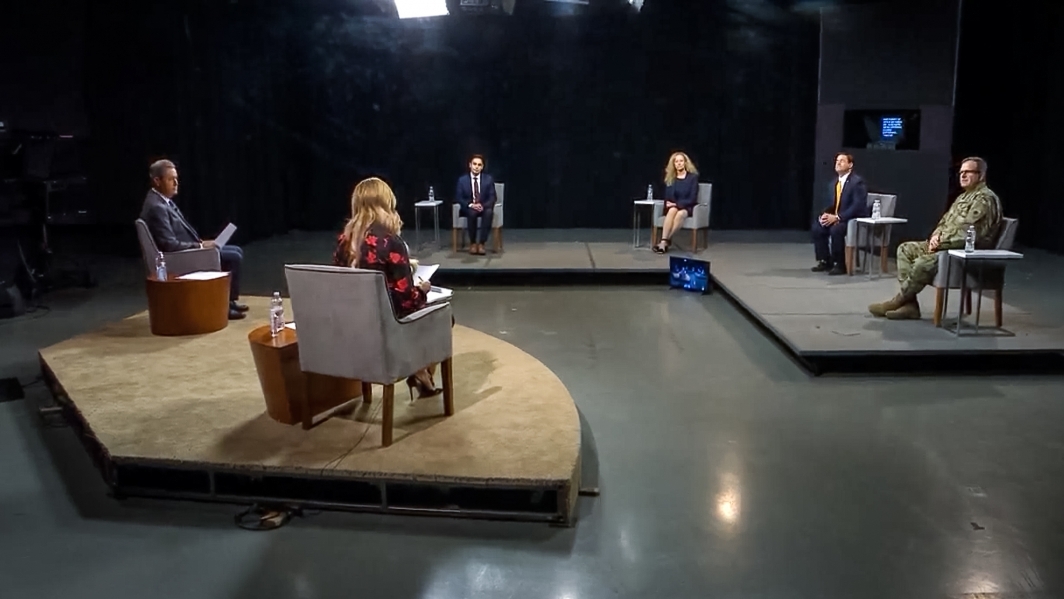 There are nearly 1,600 positive COVID-19 cases in the state and 32 deaths from the illness. An infographic shared during Thursday's town hall showed the cases by county. Cara Christ, director of the Arizona Department of Health Services, said Thursday that the state is starting to catch up on testing and that the state’s priority is to test frontline workers first — nurses, doctors, health care workers and first responders.

Beyond public health and chain supply, Ducey said the economy is also a priority and that the state has taken a big hit in terms of unemployment.

“My concern is for the everyday Arizonan who lives from paycheck to paycheck. That’s why I prioritize first,” said Ducey, who said he is also talking to banks and landlords to ensure that residents are not booted out on the street. “And then I’m thinking of the small-business people and medium-business people. The big guys (corporations) do OK through the downturn.”

Ruiz, who oversees the operations of all state agencies and manages Ducey’s cabinet, encouraged people who are unemployed or in need of assistance to go to ArizonaTogether.org for resources.

“We are working around the clock investing in server capacity, hiring workers to answer calls,” Ruiz said. “We want to get these processed as quickly as possible. We also have resources from the Arizona Commerce Authority as well as the Small Business Administration and can provide options in terms of financial relief and payment assistance.”

The virus has also caused disruption to the public and private education system, which Ducey said he is working hard to address.

Ducey said he is also working around the clock and planning on a daily basis and taking steps to ensure good outcomes for Arizona.

The town hall broadcast can be viewed in its entirety here.

Top image: A screenshot of Arizona Gov. Doug Ducey during the hourlong interview broadcast from the Arizona PBS studios in the Cronkite building on ASU’s Downtown Phoenix campus and simulcast on TV and radio stations throughout the state Thursday evening.