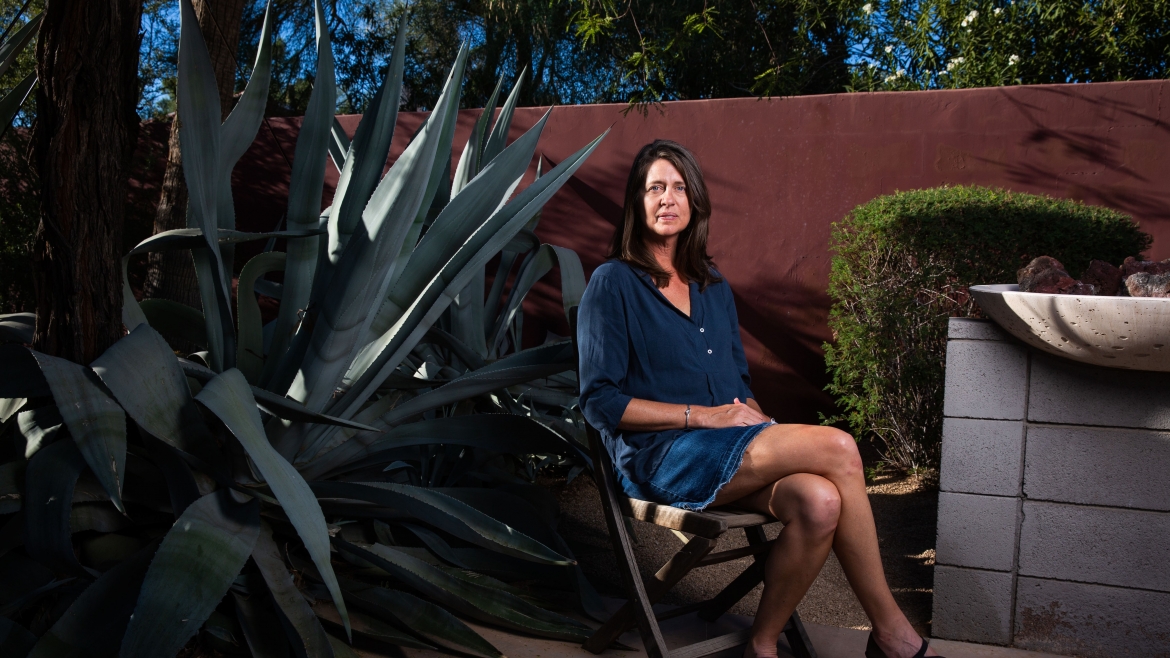 “Who cares if I fold up at my desk
a heap of angry sorrow. Not any candidate
no ambassador. Sign a petition? Email some senators?
I make nothing happen.” 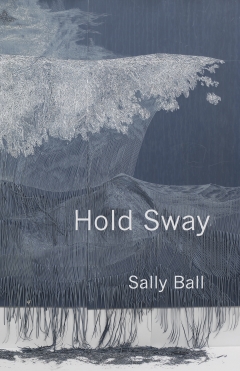 These lines, written by Arizona State University poet Sally Ball, speak of the feeling of far away-ness, of helplessness at world events — a sentiment to which many of us can surely relate. The text is from her 2015 poem, “Temple Example,” about the destruction at Palmyra, Syria. But it could have been written yesterday.

Indeed, many poets in the current moment are using words to articulate despair, loneliness and, yes, hope. The voice — whether sung, spoken or written — is one of the most profound ways to express oneself and connect with other humans, even (or especially) at a distance.

And so, many of us (non-poets too) write. Journalists have think pieces, the Twitterverse has threads, corporations have reassuring policy positions. We also have the “share” button. Perhaps the first “viral” poem of the social media age was Maggie Smith’s “Good Bones,” shared in 2016 over many difficult events. This month, Kitty O’Meara’s “And the People Stayed Home” has made the virtual rounds. The act of sharing itself seems to offer solace.

With all this in mind, we spoke with Ball, associate professor of English at ASU and associate director of Four Way Books, a press based in New York City, to get her thoughts on how poets in particular can respond to times of uncertainty and distance.

Answers have been edited for clarity and length.

Question: Is there a particular poet you turn to when facing uncertainty?

Answer: This week, I went straight to Yannis Ritsos, the Greek poet whose life involved isolations of several kinds: early on, in sanitoriums for tuberculosis patients (he lost his mother and older brother to the disease) and then later political exile, imprisonment and censorship. He had become a Communist in the '30s and was a target of Greece’s dictatorial leader, Ioannis Metaxas, who modeled himself on Hitler and Mussolini.

Ritsos was prolific, both when he was ill and when he was under arrest — which happened because he joined resistance forces toward the end of World War II (he also wrote plays for the Peoples’ Theater of Macedonia) — and because he was critical of the Metaxas regime. During his detention, he wrote poems and buried them in bottles to hide them from camp guards.

So, he’s someone who knew adversity in many forms, and for whom writing was a life-saving act, whose work ranges from activist to contemplative, and whose poems often seem intimate, across time and translation and national circumstance.

Q: Which poem by Ritsos speaks most to you right now?

A: Without initially knowing why, I went looking for “The Meaning of Simplicity.” You can find a version on the Poetry Foundation website, though I will quote the Keeley translation, which I prefer. It’s a poem in which the speaker and his beloved are not able to connect:

“I hide behind simple things so you’ll find me,
if you don’t find me, you’ll find the things”

As readers, we don’t know if they are physically parted or at odds in some way. Reading it now, I understand anew that it’s a poem about the way language can approximate an actual physical connection. If he describes an object he has touched, his lover can touch it too.

The saying itself creates a physical imprint.

Q: What have other poets said or written about social isolation?

A: Poets know that language can affirm and fulfill our need to both see and be seen by others. Ritsos’ linguistically shared touch reminds me of Claudia Rankine’s thinking about what Paul Celan says of poetry: that a poem is no different than a handshake. Rankine talks about this in a book called "Don’t Let Me Be Lonely," which seems so apt here too: She’s using Celan’s idea to reach out toward her reader, the way a poem replicates spiritually what a handshake offers physically:

“The handshake is our decided ritual of both asserting (I am here) and handing over (here) a self to another.”

If we are aiming not to let each other be lonely, we need to find ways of “shaking hands” that can happen despite social distance. Rankine says of a poem’s proffered intimacy:

“This conflation of the solidity of presence with the offering of this same presence perhaps has everything to do with being alive.”

I think when we are isolated, our vulnerability is both the thing we are afraid of, and the thing we need someone to recognize, connect with. Rankine’s idea that our physical, real, bodily self is part of what we offer — as a writer, as a reader — and part of what is met, even at a distance, when Poem X is read by Reader Y — I think it’s true.

Poems can be company: consolation, yes, shared grief or joy, provocation or laughter. All of it! By what they say, and what they don’t say. Ritsos again:

“We could trust in the words he had not said,
And in his hands.”

Q: Do you have additional reading recommendations for this strange time of social distancing?

A: Here is a short list of books that can pierce through a sense of isolation. After all, as Ritsos’ poem says:

“Every word is a doorway
to a meeting, one often cancelled,
and that’s when a word is true: when it insists on the meeting.”

“I Live in the Country” by Arielle Greenberg (Four Way Books, 2020): sexy pastorals advocating for pleasure even in dire times …

“First I wanted be an animal who survives, who lives, who eats yolk and red fruit, who drinks clear water, who sleeps down in a tight thick curl all winter…”

“In that quiet, the space between us changes into music …”

Ever since he was 4, Aditya Khuller has dreamed about exploring the vast frontiers of space. First it was the study of stars, but he wasn’t sure if he wanted to be a professor to support his research. So he chose the path of an aerospace engineer and led a team of Arizona State University students that built an innovative small satellite propulsion system: a multiple-axis pulsed plasma thruster... 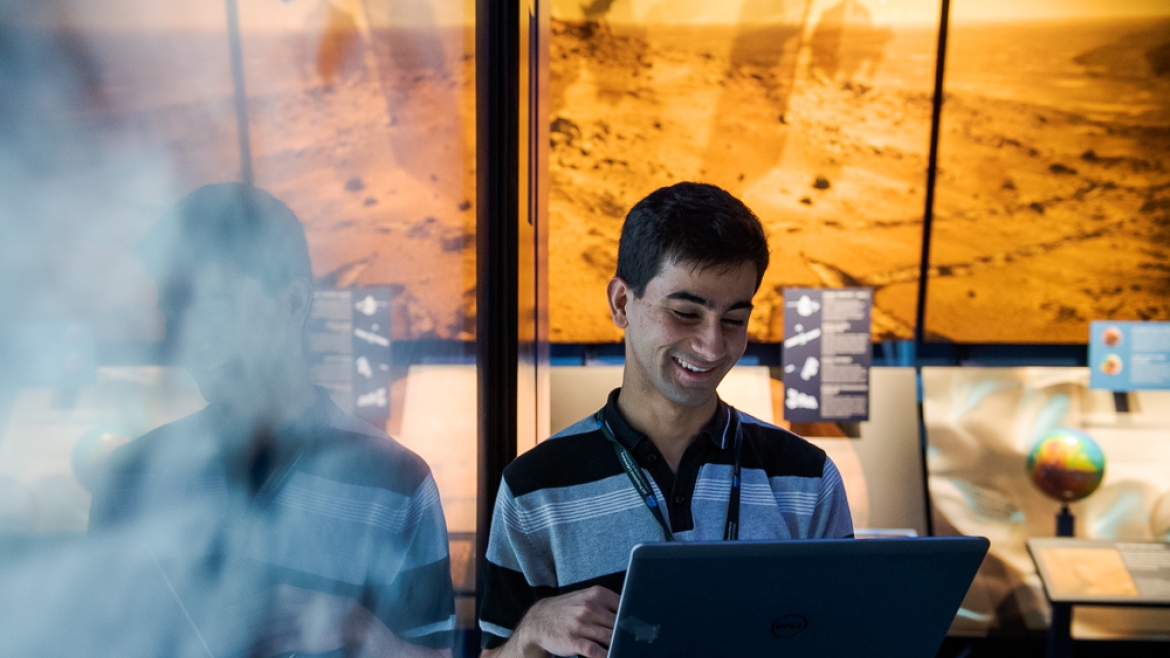 Ever since he was 4, Aditya Khuller has dreamed about exploring the vast frontiers of space.

First it was the study of stars, but he wasn’t sure if he wanted to be a professor to support his research. So he chose the path of an aerospace engineer and led a team of Arizona State University students that built an innovative small satellite propulsion system: a multiple-axis pulsed plasma thruster, "trying to do something that had not been done before."

Khuller became hooked after taking an introductory class taught by ASU’s Phil Christensen, Regents Professor in the School of Earth and Space Exploration.

“He talked about the Mars space flight program at ASU, his work on instruments for NASA, and what he does for their missions,” Khuller says. “I had never heard anything this fascinating.”

During the past three summers, Khuller delved further into the study of Mars as an intern at NASA’s Jet Propulsion Lab in Pasadena, California. This summer, Khuller’s work on a Martian dune project with NASA Mars Program Office Scientist Serina Diniega involved understanding and characterizing the formation of sand dunes on Mars and comparing them with dunes on Earth. Their work could help determine how wind can affect surfaces on different planets, with implications for future manned missions to Mars.

Khuller spent the majority of his time at JPL examining a host of data from orbiting Mars spacecraft, ranging from visible imagery to assess morphology, coupled with thermal/near-infrared spectral data to infer physical properties and composition.

“It’s been fun seeing the outcomes of combining this wealth of orbital spacecraft data to start to put together a coherent formation mechanism for Martian dune formation,” he says. Aditya Khuller spent the majority of his time at the Jet Propulsion Laboratory examining a host of data from orbiting Mars spacecraft, ranging from visible imagery to assess morphology, coupled with thermal/near-infrared spectral data to infer physical properties and composition. Photo by  Jarod Opperman/ASU

Khuller continues work on his doctorate in planetary science and geology under Christensen. His goal is to combine his experiences from engineering and science to become a research scientist in planetary science, while having the opportunity to work on active NASA missions.

“I hope to integrate this experience into my career as I begin my PhD,” he says. “Aeolian geology (dunes, yardangs, etc.) is a very interesting side of planetary geology that I have only delved into briefly during my first internship at JPL two years ago (under Research Scientist Laura Kerber), and I look forward to learning more under Diniega’s guidance.”

“I’m an international student from India, because of which I’m extremely limited by the types of financial aid, scholarships and opportunities I can apply to,” he says. “To get support from ASU and Barrett is fantastic, and I’m really grateful for these opportunities. I feel like I am part of a family here.”