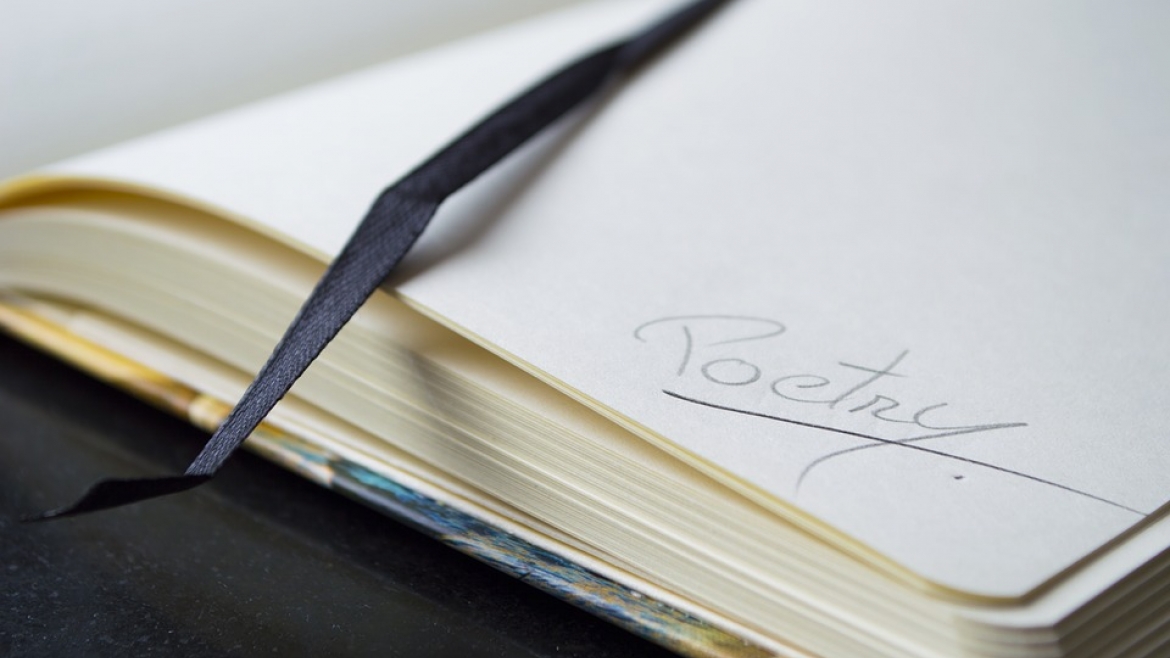 Poetry is a sociohistorical record of both facts and emotion

Arizona State University English lecturer Rosemarie Dombrowski is on a mission to make poetry part of the vernacular in Phoenix.

“Like street art and food trucks,” said Dombrowski, who is also the inaugural Poet Laureate of Phoenix and the founding editorDombrowski is also the editor of Write On, Downtown, a literary and visual arts journal produced by ASU. of Rinky Dink Press, a micropoetry press that she founded with a group of intermediate poetry students on ASU’s Downtown Phoenix campus. “Poetry needs to be present alongside all the other more visible art forms.”

Dombrowski’s timing could not be better. April is National Poetry Month, which was inaugurated by the Academy of American Poets in 1996 and celebrates poetry’s vital place in our culture.

ASU Now spoke to Dombrowski about the finer aspects of poetry, its importance over the years and what draws her to the art form. 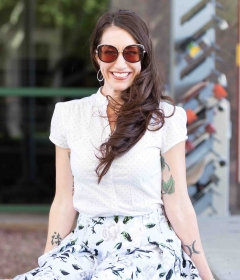 Question: Is poetry a lost art form? Has it shifted into something else, and where is the audience these days?

Answer: I think poetry is perpetually being lost and found. A lot of contemporary readers have trouble connecting with poetry of the 19th and early 20th century, and a lot of the poetry from the 1970s and '80s is dense and experimental, but I still love teaching it because it’s such a valuable cultural record, a literary and aesthetic artifact of its respective time.

So yes, maybe some of the more antiquated poetry is lost outside the academy, though Whitman and Dickinson constantly make appearances in popular culture, and for good reason — they weren’t just radical for their time! But contemporary poetry has taken on so many forms that it’s impossible to deny its reach — from rap to spoken word, slam to the omnipresent poems of Maya Angelou. I think about how Kendrick Lamar got his start in slam, and how one of the most lauded poets in the contemporary scene, Danez Smith, also got his start in slam. Poetry was a lyrical means of communicating in the ancient world, and I think a lot of spoken word artists are proving that it continues to be a critical means of communicating in the present — and future.

And then I think about the importance of poems in the political arena, from the inauguration of Kennedy through Obama, how poets were selected to write commemorative, celebratory poems filled with hope for the future, and how Robert Frost and Maya Angelou and Elizabeth Alexander were brought into people’s living rooms as a result. That’s big.

We also have to give at least partial credit to the myriad publishing mediums of the new millennium, all of which have helped to revive poetry by making it more accessible and relevant — from online-only journals like Pank to websites like poets.org (sponsored by the Academy of American Poetry), from independent zines to zine-style small presses, from identity-based anthologies to politically themed ones, there’s something for everyone in the poetic marketplace.

Q: What is so compelling about poetry to you?

A: I think it might be because I have self-diagnosed ADD, but I think it also has something to do with the fact that my mother read nursery rhymes to me every night when I was an infant, and they were the first things that I could recite from memory. And then I started tap dancing when I was 5, and I danced competitively for almost a decade, so poetry satiates my need for rhythmical patterns, and there’s something about the rhythmical arrangement of language that a good poet can feel and hear internally, and the key is being able to manifest that rhythm externally on the page/mic.

Poetry has so much in common with dance. Your own body and mind are the tools by which you create both art forms, and there’s something so self-reliant and appealing about that. And the choreography of language is a kind of dance on the page.

And it’s also the brevity factor. I really do have a short attention span, but more importantly, the poem has always attracted me because of what it can contain in such a compact space.

Q: What is it that you try and teach students about poetry in your classes?

A: Lately, because of a class I developed for Barrett, The Honors College in fall '19 called Poetry and Medicine, I’m trying to convince students of the efficacy of poetry as a therapeutic tool, an augmentative medical treatment for the body, mind and spirit. My Poetry and Medicine students not only had to familiarize themselves with the relationship between poetry and medicine from antiquity to the present, they also had to familiarize themselves with the clinical research of the past decade, specifically the quantitative and qualitative studies coming out of the medical and therapeutic communities. In the final weeks of the semester, my students worked in small groups to create therapeutic workshops and conducted them in the community, both at the U of A Medical School and the Westward Ho, and the response we received was extremely positive.

Ironically, many of my students experienced profound losses and crises last semester as well, and I think we became our own anecdotal study. I think we all realized how much we needed poetry. And it seems that every time I conduct a therapeutic poetry workshop at ASU or in the community, I see people not only composing and sharing poems that deal with trauma and pain, but striping away layers of themselves in front of strangers. And I see the healing that self-expression and vulnerability instigate, and it makes me feel like I’m contributing to the well-being of the community.

But more generally speaking, I try to teach my students that poetry is a form of ethnography (i.e. cultural writing), that it’s a record of the myriad cultures that have produced it as well as a sociohistorical record of both facts and emotion, logos and pathos. It’s the only form of recorded history that speaks to us both lyrically and honestly.

Q: How has being the Phoenix poet laureate impacted the poetry you produce?

A: Historically, my poetry has been very confessional and medical, what some might call disability poetics. I’ve spent years writing about the culture of nonverbal autism because of my son — who’s 20 now, and though I do think that personal writing is political and that it often transcends the confessional, being the poet laureate has afforded me the opportunity to work with activists and organizations, to write poems for 19th-amendment celebrations and ERA marches, State of the City addresses and public defenders conventions. And I guess I feel like I’ve discovered a part of myself that was dormant, and I’ve come to re-realize that I’m an activist too, and that I want to be more useful to my community, and as a poet, I feel like I’m someone who can sort of “rally the base,” maybe even educate and incite people.

And it was this realization that led me to create The Revolution (Relaunch) in July of 2019, which is a creative resurgence of the official newspaper of the National Women’s Suffrage Association founded by Elizabeth Cady Stanton and Susan B. Anthony in 1868. We publish a range of styles, like any good 19th-century newspaper (or any good 21st-century zine) — memoir, poetry, cultural criticism, interviews and profiles featuring local artists, activists and grassroots organizations. You can find new content there monthly and you can find our zine-style paper in downtown coffee shops and at local festivals and events. I love this community deeply, and I felt the need to create a platform for feminism and marginalized voices that was less intimidating than a literary journal, something with more DIY charm.

I suppose at the end of my term in December 2020, I’d like to have solidified myself as a poet-activist with a lot of DIY charm!

Q: Do you see a role that poetry could play in terms of helping to lift our spirits during this phase of uncertainty in the world?

A: I’m writing nightly, which is pretty typical for me, but it seems that every sentence I’m committing to the page is a form of processing, an exercise in coping — also somewhat typical for me. Again, I’m always telling medical students that poetry teaches us how to sit with uncertainly, and these are most definitely uncertain times, so what better time to prepare ourselves for the city/society that we’re going to have to rebuild on the other side? We can read and write poetry in our spaces of isolation, and hopefully, we’ll discover some sense of quietude there.

There’s a meme going around that a friend of mine sent me the other day. It features the iconic portrait of Emily Dickinson, and it reads “This is Emily. Emily stays inside. She reads. She writes poetry. She writes letters. She bakes. She does a bit of bird watching. Then she writes some more. Emily is safe from COVID-19. Be like Emily.” Despite it promoting the somewhat false stereotype of Dickinson-as-shut-in, it speaks to our need to look inside ourselves, to be deeply reflective, and we don’t have the typical excuses to prevent us from practicing self-examination and mindfulness right now, not if we’re doing the only conscionable thing of sheltering in place. So I believe that poetry is, and has been, a means of coping through personal, cultural and global crises, and I believe its presence is going to be stronger than ever as we navigate our uncertain present and future.

Freshman David Puig, who is ranked No. 33 in the World Amateur Golf Rankings, has been selected to play in the Palmer Cup for the International Squad. ... Freshman David Puig, who is ranked No. 33 in the World Amateur Golf Rankings, has been selected to play in the Palmer Cup for the International Squad.