For 25 years, as a population geographer and demographer at Arizona State University, she focused on migration patterns and urban planning issues in the Phoenix metropolitan area. 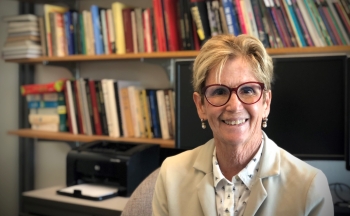 Pat Gober, a research professor in ASU’s School of Geographical Sciences and Urban Planning, will be retiring as full-time faculty after 45 years to focus on research and professional service projects. Download Full Image

Then came an email from the National Science Foundation.

The government agency was looking for social scientists to pursue work that advanced the understanding of decision-making in uncertain environments. Gober’s mind started to churn with ideas.

“I read the request for a proposal and it was written very generically, but for me, I could see climatic uncertainty in Phoenix and water and growth,” Gober recalled. “I thought it was written for Phoenix and for me to be able to put different disciplines, economics, hydrology and geography all together to tell a water story.”

Gober teamed up with then ASU anthropology chair Chuck Redman and applied. They won the grant.

“From that moment on, I became a water person,” Gober said.

Today, 20 years later, Gober is a leading authority on water management decision-making research. Her research sparks interest across the globe, and she has won international prizes for being at the forefront of integrating physical and social science for water planning.

This month, Gober will be retiring from ASU’s School of Geographical Sciences and Urban Planning full-time faculty to focus on research and professional service projects, but her outstanding leadership, mentoring and scholarly contributions to the department and the field of geography at large will never be forgotten.

In the face of a long-term drought, rising temperatures and global climate change, growing cities like Phoenix face hard questions about how to prepare for a future with less water.

Since 2000, the Colorado River Basin, a crucial source of Phoenix’s water supply, has been suffering a drought linked to higher temperatures and climate change. The basin provides less water than it used to, having declined by more than 16% in the past century. If trends continue there is a risk of severe water shortages for the 1.6 million people living in the Phoenix metropolitan area.

“If you really are interested in the future of Phoenix you have to be interested in water,” Gober said. “In a desert city it’s the engine that supports growth and development.”

After being awarded the NSF grant, Gober centered her research on the human activities around managing water and the use of science for water decision-making.

“The focus of my research became: How do we take knowledge as scientists and put it to good use in water management decisions?” Gober said. “As geographers, I think we’re really well equipped to bring different groups together to solve a problem.”

Decision Center for a Desert City

The research center, armed with more than 40 people of various academic disciplines, aimed to advance research about water management decisions in the context of rapid population growth and urbanization, complex political and economic systems and global climate change.

Gober brought the water science community together with the water policy community to build decision tools that would help integrate climate change into decision making. She sparked important dialogue for groups to learn from each other and together examine the future growth of Phoenix.

Facilitated interactions included monthly water briefings, joint colloquiums and the co-development of water simulations and global climate models. The center became a model of successful science and policy integration where decision-makers and scientists could collaborate on important research questions and experiment with new methods.

“We enhanced learning between the two groups so that collaboration was easier,” Gober said. “We created the social institutions to make sure it was happening on a regular basis. It was our contribution to the water discussion locally.”

Gober often is tapped by researchers around the globe to speak about the technologies and strategies developed by the project and how to apply what ASU has done in other parts of the world.

“Pat’s command of the social and physical geography of this region together with a growing knowledge of decision science made our application a winner,” Redman, the founding director of the School of Sustainability, reflected in response to the NSF grant proposal. “From that point forward she led the intellectual exploration and community engagement that DCDC has become internationally known for.”

Gober’s ASU story began in 1975 when at the age of 25 — fresh from earning her PhD from Ohio State University — she flew across the country to accept a role as an assistant geography professor.

Over the course of her 45-year tenure at ASU, she held a range of appointments including a term as chair of the Department of Geography, where under her leadership it grew into a nationally-ranked geography doctoral program.

Gober also journeyed beyond ASU during her time here, serving as a visiting professor at University College London and professor at the University of Saskatchewan. She has published three books about her research, the most recent in 2018 titled, “Building Resilience for Uncertain Water Futures.”

Gober fostered a new capacity for learning wherever she went and her demonstrated leadership was felt beyond the university settings and into her commitment to public service.

Over the course of her career, Gober led the global network of leading geography researchers, educators and practitioners as president of the Association of American Geographers; served as a member of the science advisory board for the National Oceanographic and Atmospheric Administration; was a former member of the Population Reference Bureau's board of trustees; and for seven years served on the Stockholm Water Prize nomination committee, amongst many other professional service commitments.

Gober holds an honorary doctorate of science from Carthage College in Kenosha, Wisconsin; is a fellow of the American Association for the Advancement of Science; and was awarded the Prince Sultan Abdulaziz International Prize for Water in 2008. She received the ASU's Faculty Research Achievement Award in 2009, the Association of American Geographers' Presidential Achievement Award in 2011 and will be recognized with the highest honor offered by the association in April, receiving the Lifetime Achievement Research Award in the population specialty group.

Gober credits the support she’s received from ASU to giving her the grounding to advance her academic career and research pursuits.

“Everything I’ve been able to achieve has been from my ASU base,” Gober said. “I’ve had great encouragement and support to pursue my interests inside the university and outside the university, it’s a great place to be.”

She continued, “I really feel like this has been a place that is supportive of a person like me to make a big change in topics and to make it possible for me to have done the things that I have done. I think the university saw the importance of science really informing decision-making. I have tremendous gratitude for finding a supportive academic place.”

Proud to have seen the growth of the School of Geographical Sciences and Urban Planning and to continue to be a part of it its future success, Gober has committed to the future of water research at ASU by investing in student success.

“I think water is a natural topic for geographers, it was for me,” Gober said. “To have a more secure water future, we should do more water research. My hope is that this scholarship will inspire someone to do something they may not have otherwise have done.”

Qualified submissions will be in the area of water-related research broadly defined. This includes, but is not limited to, water policy, climate research, geomorphology or social science. Funds can be used to support travel, purchase of data, surveys and expendable field supplies related to the proposed research.

A bright future ahead

As Gober answers the call to the next chapter of her career, she remains an active part of the ASU family and looks forward to advancing several ongoing professional research service projects.

“I’ll continue to do research with other people, I continue to do work with students, but now I have the time for more professional responsibilities.”

Amongst many other things, Gober is currently serving on a water review committee for the University of Stockholm in Sweden, reviewing a 600-page book in her field of research, and collaborating on several other research projects.

“I have found a lot of things that I can still do to keep myself active where I know what’s going on in the field," Gober said. “I’m not teaching anymore, not serving on student committees, but I continue to do research and public speaking. I’m not leading a bunch of research projects but I’m participating in them,” Gober continued.

“I try to add value to what someone else is doing.”

And add value she has for more than four decades, as she undoubtedly will continue to for years to come.

In honor of Gober’s outstanding career and service to ASU and water research, donations can be made in support of the Pat Gober Water Prize here.

Selim Sets PR and Qualifies for NCAAs in Three-Meter

Selim earned his fourth-straight bid in four years in three-meter, taking first in the finals this morning. ...

Selim Sets PR and Qualifies for NCAAs in Three-Meter Selim earned his fourth-straight bid in four years in three-meter, taking first in the finals this morning.