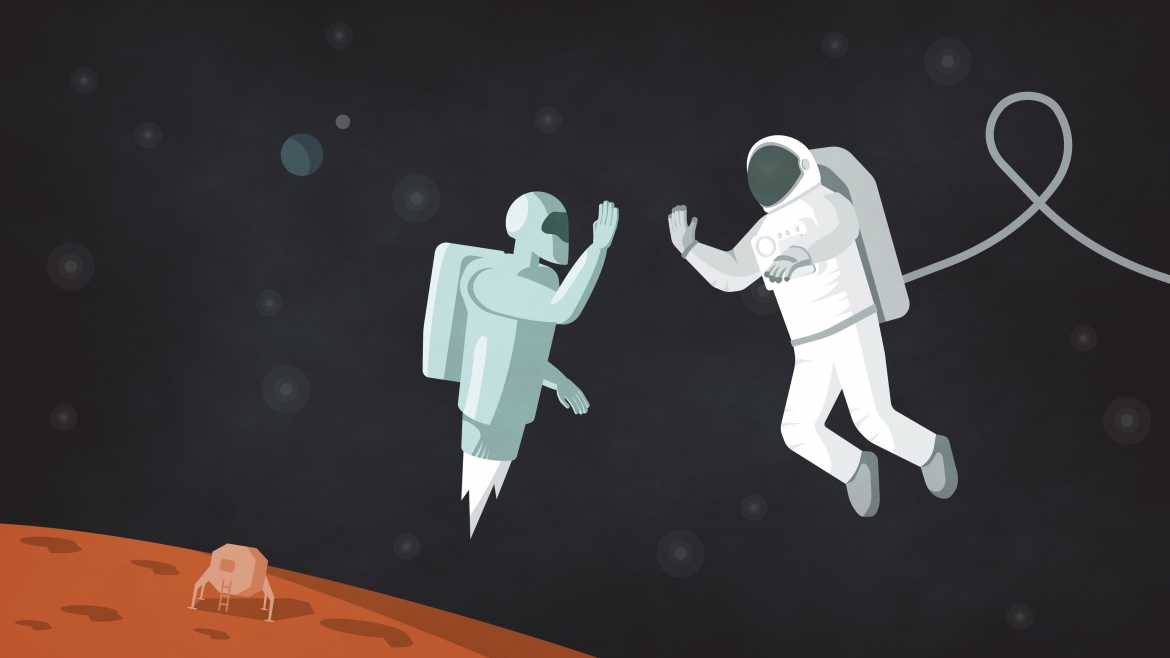 Robots exploring on their own and self-piloting spacecraft are a long way off, says NASA computer scientist

Robotic rovers trundle across the Martian highlands, eyeing the terrain and stopping to scoop up promising samples. A spacecraft powers across the cosmos while the crew sleeps. On the moon, a habitat’s brain automatically notices CO2 levels are off and adjusts them.

It’s the stuff of science fiction. And it’s going to stay that way for awhile, said a NASA computer scientist working on putting artificial intelligence into space.

NASA has taken a few tiny steps in deploying AI, but robots exploring on their own and self-piloting spacecraft are a long way off, said Jeremy Frank, group lead of the planning and scheduling group in the Intelligent Systems Division at NASA Ames Research Center. He spoke to an Arizona State University audience Tuesday in a talk sponsored by the School of Computing, Informatics, and Decision Systems Engineering AI Group, in the Ira A. Fulton Schools of Engineering.

A few small subsystems have been tested in flight, including water purity testing machines, a warning system on the Orion crew capsule and a management system for laptops on the International Space Station, which are critical pieces of equipment.

(Fun fact: 180,000 pieces of information come down from the ISS every day, not counting payload data, according to Frank).

Frank works on the development of automated planning and scheduling systems for use in space mission operations; the integration of technologies for planning, plan execution, and fault detection for space applications; and the development of technology to enable astronauts to autonomously operate spacecraft.

The Artemis program — getting humans to the moon by 2024 — is a stepping stone to Mars, but it’s going to use many of the same technologies.

That technology will require human interfaces and flight software integration.

He predicted that will involve a combination of high performance computing and machine learning. “We’re not going to have our spacecraft learn” in flight, he said. (There’s also no way a flagship mission is going to go without ground communication, he added.)

How far has NASA come?

A warning system was tested on the first flight of the Orion crew capsule six years ago. A test project called the Advanced Caution and Warning Systems monitored the health of the Orion’s critical vehicle systems using live data transmitted to the ground during the flight test.

The system was designed to monitor the mission from launch through splashdown to display information about failures and provide information on the effects of failures. The team demonstrated future Mission Control Center and onboard displays that maximized awareness of what was happening during failures. It determined the cause of failures and spotted components affected by failures to provide a comprehensive view of the health of the spacecraft. It also assisted operators using “what-if” queries that identify next-worst failures to help operations teams be prepared for the most critical system issues.

“These missions will require changing the capabilities of spacecraft, the roles and responsibilities of ground and crew, and the ways that ground and crew interact during the mission,” a NASA press release said.

“These conversations put into perspective how much work we have to do,” Frank said.

Arizona State University's Global Security Initiative is expanding its efforts to prepare the next generation of cybersecurity professionals for the careers of tomorrow. The initiative and the New College of Interdisciplinary Arts and Sciences have agreed to integrate the Cybersecurity Education Consortium into the initiative's portfolio, complementing its current interests in cybersecurity res...

Arizona State University's Global Security Initiative is expanding its efforts to prepare the next generation of cybersecurity professionals for the careers of tomorrow. The initiative and the New College of Interdisciplinary Arts and Sciences have agreed to integrate the Cybersecurity Education Consortium into the initiative's portfolio, complementing its current interests in cybersecurity research and workforce development projects.

“Since ASU New College launched the CEC in 2016, we’ve developed industry partnerships, built a hub for information among ASU’s various cybersecurity degree offerings, and raised awareness of cybersecurity careers among middle and secondary school students and faculty. Now merging the CEC with GSI will only build upon and amplify the progress of which we are so proud,” said Todd Sandrin, dean of the New College of Interdisciplinary Arts and Sciences.

The consortium will continue to perform these roles as an enterprise of the Global Security Initiative, which is already home to the Center for Cybersecurity and Digital Forensics. The integration of the consortium's programming with existing cybersecurity efforts in the Global Security Initiative will enhance ASU-wide coordination on the topic, offer external partners interested in collaborating with ASU on cybersecurity research and workforce development efforts a clear point of contact at the university, and enhance the consortium's connectivity with academic units in the university to achieve its cross-disciplinary objectives.

“The CEC complements GSI’s current portfolio in cybersecurity research and workforce development quite well. We have a tremendous opportunity to positively impact the local and national cybersecurity education ecosystem by arming lifelong learners — ranging from students in elementary school to deep technical experts already working in the field — with the skills necessary to thrive in our rapidly changing world,” said Nadya Bliss, executive director of the Global Security Initiative.

The initiative's immediate goals will be to scale current consortium activities to reach deeper and further into the community. Some of these initiatives include CyberDay4Girls, in collaboration with IBM, to expose middle-school girls to cybersecurity concepts and careers; expansion and  enhanced distribution of a cybersecurity curriculum for middle school students; and working in partnership with community colleges, industry, school districts, governments and others to further establish the greater Phoenix area as a national leader in lifelong cybersecurity education.