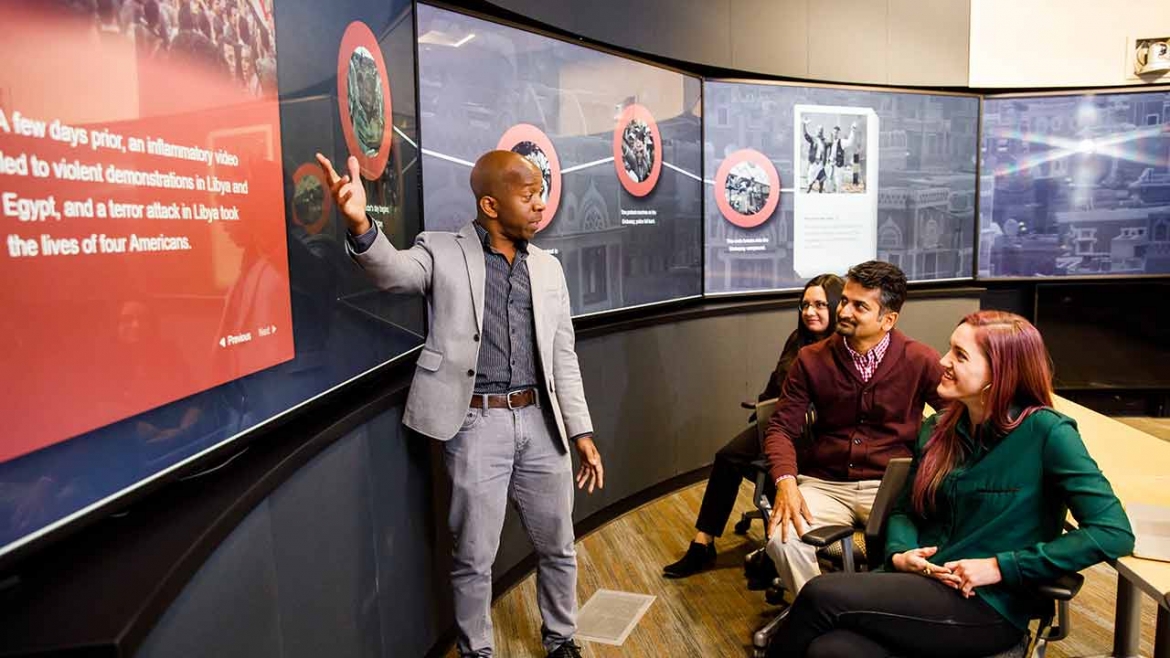 Imagine you are a U.S. ambassador, and a new government has been installed in your host country. Your job is to help ensure free and fair elections, which are under threat. Should you send your staff if they might be in danger? What risks do you take to protect the elections?

This situation is one of five that new ambassadors will face in a training program developed by ASU Decision Theater and the American Academy of Diplomacy, in partnership with the Una Chapman Cox Foundation.

Though the scenario is fictional, real diplomatic work is filled with similar dilemmas — precrisis situations that have the potential to escalate. However, most ambassador training focuses on how to handle a situation only after it becomes a crisis, rather than how to prevent a crisis altogether.

It brings new ambassadors together with seasoned mentors to go through simulations of precrisis situations, which ask the trainees to make decisions and prompt discussion.

“What’s different about it is it’s an experiential learning, highly engaged training session to get ambassadors to think about solving problems before they become a crisis,” said retired Army Lt. Gen. Benjamin Freakley, executive director of the Decision Theater.

The American Academy of Diplomacy is an organization dedicated to improving American diplomacy and educating the public about its importance.

“A lot of the work overseas is about how you balance risk with what you’re trying to do, and how you make those kinds of decisions, which may go on for a very long time,” said retired Ambassador Ronald Neumann, president of the AAD.

Freakley was the commanding general of U.S. forces in Afghanistan from 2006 to 2007, during which time Neumann was the ambassador to Afghanistan, so the two already knew each other before teaming up to tackle the ambassador training program.

“When AAD first conceived the training and suggested partnering with ASU, there were a lot of straightforward, yes-or-no questions along the way," said Keren Hirsch, Decision Theater’s project manager, who worked closely with the team that developed the training. "One of the pieces of feedback we got when we presented it to retired ambassadors was that an ambassador is unlikely to make a big decision by themselves; they would factor in a lot of other information and recommendations. So it became more of a nuanced training. What are the conversations you have? Who do you ask for help?”

“The biggest challenge was that we were not subject-matter experts,” said Professor Erik Johnston of the School for the Future of Innovation in Society, who was ASU’s academic lead on the project and developed the team of experts who worked on the program.

Fortunately, the AAD was able to recruit more than 15 former ambassadors and top diplomatic security officers who had navigated many crises. This group of seasoned experts advised Johnston and the team on the training’s design.

“This led to one of the most innovative and useful parts of this program, which was designing it in a way that facilitated conversation between those with previous expertise and those being trained,” Johnston said.

It also helped the team with the challenge of creating scenarios that walked the line between risk and outright chaos, so that trainees remained in a true precrisis situation.

"They are immersed in the challenges of making these decisions."
— retired Army Lt. Gen. Benjamin Freakley

In addition, the team wanted the training to be engaging enough that participants would not lose interest as it went on — an important factor, since it was designed to take about eight hours.

Besides crafting captivating scenarios and promoting lively discussion, part of the training program’s success in this area is due to the unique environment in which it takes place. DT’s round, central hub with seven surrounding screens, known as “the Drum,” helps trainees get in the mindset of actually being in each scenario.

“By having a simulation in there, it brings very impactful images and information to the ambassadors. They are immersed in the challenges of making these decisions,” Freakley said. 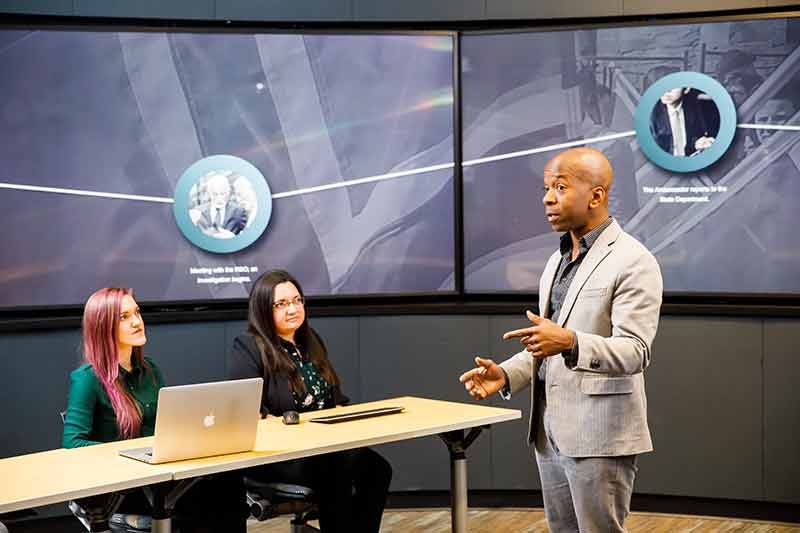 (From left) Holly Smith, Ana Hernandez and Michael Bennett talk through a simulation from the ambassador training program at Decision Theater. Photo by Andy DeLisle/ASU

The goal of the training program is not to prescribe a set of steps for ambassadors to follow, but rather to help them practice thinking through tricky decisions that may not have a clear-cut answer.

“We’re teaching people how to think about dealing with a situation. We’re not teaching them how to do it in a specific way,” Neumann said.

The full-day training takes a small group of newly appointed ambassadors through five increasingly difficult scenarios. Each scenario begins by presenting the trainees with a situation, and their goal is to make decisions that help mitigate it as much as possible. Much like a “choose your own adventure” novel, each decision they make leads to a unique result and a new set of choices.

One scenario, an embassy in Yemen being stormed during a protest, is a recounting of actual events as they unfolded. The other scenarios — such as children being harmed by a U.S. landmine left over from a previous conflict, or a deepfake video of the deputy chief of mission siding with a host country’s adversaries — are fictional.

The deepfake scenario is the final level in the training, and arguably the most complex.

“There’s no right answer. Every possible path that trainees take has both positive and negative consequences to it,” Johnston said.

“Sometimes you do everything right and the crisis still happens, and sometimes you make all the wrong decisions and it just kind of fizzles out.”
— Keren Hirsch, Decision Theater project manager

He and the ASU team worked closely with ambassadors from the AAD to determine which kinds of scenarios would be most useful for the training. The ambassadors, Johnston says, identified deepfakes as an issue that new ambassadors will contend with in the future.

All of the scenarios are based on real stories from ambassadors, though four of the five were fictionalized for the training. This ensures that the program’s game-based methods can deliver practical experience in thinking through the types of situations trainees could face in reality.

“I don’t really like to call it a game, because it’s real work, helping them understand how to use their team, how to critically think about an emerging problem,” Freakley said.

The trainees are guided through the process by a facilitator, who narrates the scenarios and the results of trainees’ decisions, and a mentor, a former ambassador who can weigh in on the discussion and provide insight. Each simulation ends with a reflection, where trainees can review the decisions they made and discuss the outcomes. They can even go back to different points in the simulation to see the results of alternate decisions.

“Sometimes you do everything right and the crisis still happens, and sometimes you make all the wrong decisions and it just kind of fizzles out,” Hirsch said. “Introducing that uncertainty is really important.”

Flexibility for the future

In total, Hirsch says, it took the team about a year and a half to build the training. Team members also included Kenneth Eklund, a game designer who was an artist in residence with ASU’s School for the Future of Innovation in Society; Lauren Withycombe Keeler and Michael Bennett, both faculty in SFIS; Kaylin Ayotte, a graduate student worker; Vikash Bajaj, the lead developer; and Ana Hernandez, the graphic designer.

DT also built PowerPoint versions of a few of the simulations so that, even if trainees are in a place with no internet connection, they can still go through a portion of the training. And though the training is most impressive when viewed on the Drum’s seven screens, Hirsch adds, it’s also easily transferred to a laptop, so that it can travel the world along with the ambassadors.

The framework of the training itself — the software based on branching pathways and the structured discussion — is also versatile enough that DT could apply it to other areas outside of foreign service.

“People who need to plan cities, respond to disasters or address public health crises need to be able to think in terms of systems and understand how others might be thinking in that environment, so that they can make the best choice possible with the given information,” Johnston said.

“We can hang almost anything on this framework to put people in a simulation to help them make decisions and work through complicated environments,” Freakley said.

Grant in Top-10 Through Day Two of IJGA Collegiate Invitational

Sun Devil Women's Golf moved into fourth place with Linn Grant sitting in the Top-10 after day two of the IJGA Collegiate Invitational. ...

Grant in Top-10 Through Day Two of IJGA Collegiate Invitational Sun Devil Women's Golf moved into fourth place with Linn Grant sitting in the Top-10 after day two of the IJGA Collegiate Invitational.