With 5 trillion pieces of plastic in the oceans, the dynamics of marine environments are shifting in ways that are yet to be discovered. Over time, discarded plastics such as sandwich bags and flip-flops have degraded into small particles, called microplastics, which are less than 5 millimeters long. Kassandra Dudek, doctoral student at Arizona State University's School of Life Sciences and former Smithsonian Tropical Research Institute (STRI) fellow, looked at how marine microbial communities colonize microplastics in Panama.

She took six common plastic types found in most household items, like the plastics found in water bottles and milk cartons, and cut them into tiny pieces before submerging them in the tropical waters of Almirante Bay, at STRI's Bocas del Toro Research Station. Since Panama acts as a catch basin for marine debris in the Caribbean due to its geography and interaction with oceanic currents, it's a prime location to study plastic pollution. 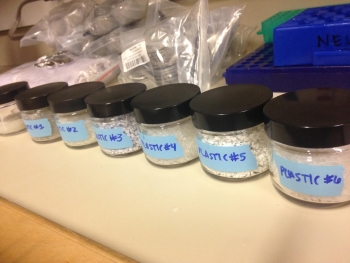 In this study, different types of commonly used plastics were cut into microsize pieces before being deployed in the ocean. Photo by Kassandra Dudek Download Full Image

"The major goal of the study was to assess differences among plastic types, and I wanted to ensure these plastics were also environmentally relevant," said Dudek, a doctoral student in School of Life Sciences Professor Susanne Neuer's lab. "Consumer items found in everyday households are the plastics polluting our beaches and oceans. It is estimated that roughly 4.8 to 12.7 million tons of plastic enter the marine environment annually."

After a month and a half, she noted that marine bacteria were not picky about the surfaces where they chose to settle. They formed biofilms — buildups of bacteria — on all plastic types and used them as artificial reefs. This created "plastispheres" — a type of ecosystem found on human-made plastic environments.

However, some diatoms, which are photosynthetic microalgae, did exhibit a preference for plastic type. Research has shown that hydrocarbon-degrading bacteria, or bacteria that may be capable of degrading plastics, can be associated with diatoms. This dynamic may ultimately prove convenient, as it could potentially promote the degradation of microplastics. 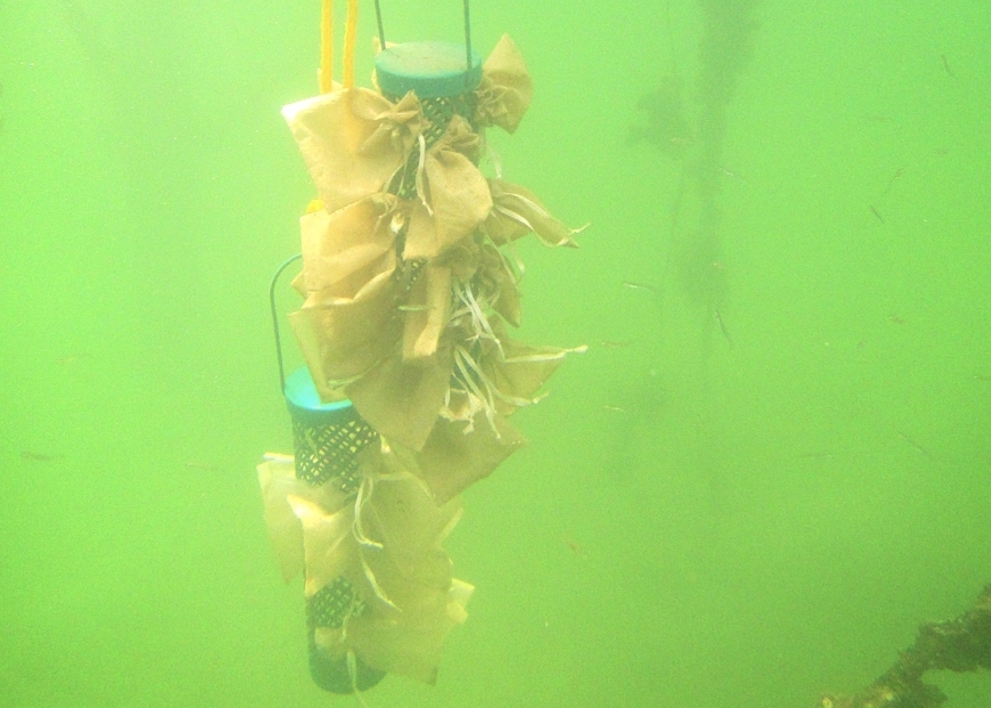 Marine bacteria settled on all plastic types and formed biofilms — using the plastic pieces as artificial reefs to create "plastispheres," a type of ecosystem found on human-made plastic environments. ASU researchers used this platform at the Bocas STRI station to deploy the microplastics being studied.

"Knowing how these plastic-adhered communities differ as a result of plastic polymer type has some interesting consequences," Neuer said. "It turns out that certain bacteria are associated with these diatoms, and those are capable of degrading plastic or other environmental contaminants associated with plastics. If certain diatoms are exhibiting a preference for certain plastic types, they may also selectively recruit these contaminant-degrading bacteria to the plastics’ surface, which might enhance the plastic’s degradation."

Dudek speculated that microplastics could also serve as a vehicle for toxic and disease-causing organisms. These contaminated microplastics could potentially be dragged from the coasts to the open oceans via currents, to be swallowed by fish or sink and affect the benthic communities on the ocean floor, but much research remains to be done regarding the role microplastics play in the transportation of pathogens.

"Only about 1% of marine plastic debris is recovered at the ocean's surface, meaning the other 99% likely either sinks or is consumed by marine organisms," Dudek said. "I am currently exploring the role microplastic biofilms have in a microplastic's degradation and sinking capacity in different marine environments."

This is the first study of its kind carried out in the coastal waters of Panama.

The research findings are published in Limnology and Oceanography Letters.

In 2009, the Smithsonian Institution joined ASU in an innovative education and science partnership aimed at sustaining biodiversity on Earth. This affiliation was created to acquire and share technology, education and outreach, and interdisciplinary research innovations in: social systems; ecosystem services; sustainability; biodiversity and genetics; and alternative energy. The School of Life Sciences leads this endeavor with the Smithsonian Tropical Research Institute in Panama.

Award-winning filmmaker, actor and director Fanny Véliz will speak with ASU students following a screening of her film “Our Quinceanera.”The School of Film, Dance and Theatre’s Film Spark program will host the screening and the Q&A with Véliz, the film’s director and producer, this Friday, Feb. 21, at 6:30 p.m. on ASU’s Tempe campus.The documentary follows a high school principal i...

Award-winning filmmaker, actor and director Fanny Véliz will speak with ASU students following a screening of her film “Our Quinceanera.”

The School of Film, Dance and Theatre’s Film Spark program will host the screening and the Q&A with Véliz, the film’s director and producer, this Friday, Feb. 21, at 6:30 p.m. on ASU’s Tempe campus. 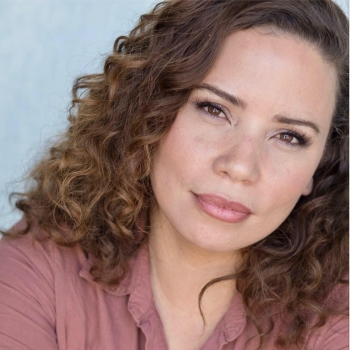 The documentary follows a high school principal in a small town in Texas who hosts a yearly quinceañera for students who can't afford one. The entire border town gets together to teach these girls that with the power of community, any dream can come true.

Véliz said the film has won every film festival where it has screened.

In addition to the success of “Our Quinceanera,” Véliz was just announced as one of eight female filmmakers selected for a new development program as part of the Geena Davis' Bentonville Film Foundation. The program aims to foster voices from underrepresented groups. Véliz, who is one of the few working Latina directors in the U.S., will receive industry support and financial backing over the next year.

Along with Nelson Grande, she created Avenida Productions to help fund films and give a “platform and voice to independent filmmakers of color, women, the LGBTQ community and those who are overlooked and underappreciated by a vast majority of studios.” In its three years, the company has raised millions of dollars via crowdfunding for close to 200 projects.

Véliz talked with ASU Now about her films and the importance of representation.

Question: Can you share how and why you got into filmmaking?

Answer: I got into filmmaking because of the lack of roles available for me as Latina. I expressed my frustration to a professor in college, and she encouraged me to write my own roles. That’s how I got started. Then I realized, I don’t have to wait for anyone to cast me or other talented Latino actors; I can be the one to create the roles and have a say in the way our community is represented in the media.

Q: Tell us a little bit about “Our Quinceanera,” which will be screening at ASU. Why was this project so important to you?

A: I really thought it was important to tell a positive story about our community. I was also drawn to the opportunity to tell a story that takes place in a border town and the duality of the culture in the region of the country. I wanted to ask the question, “Can you live in the U.S. and also be proud of your heritage?”

Q: What do you hope the ASU students who attend the screening get from the film?

A: That everyone has a particular voice that needs to be heard. I’m mostly interested in students learning ways to make their dream projects a reality without waiting for anyone to give them the green light.

Q: How would you grade the level of Latino representation in film and TV today?

A: C+. Although there are some great shows out, the data still proves that Latinos are the most underrepresented group based on our population. Behind the camera the numbers are even lower. But I see improvement, and it’s an exciting time for our community.

Q: What advice do you have for young filmmakers at ASU?

A: Just get it made. Stay true to yourself. Tell the stories that are in your heart. The money will come if you have integrity and share your unique point of view.