Nadia Murad, the human rights advocate who exposed ISIS’s ethnic cleansing of the Yazidi minority community in northern Iraq five years ago, said Saturday that justice can be a tool for accountability and deterrence in genocidal campaigns, but it must have a vision in order to be effective.

“My message to people who have suffered the atrocities of war is to believe that things can be different. Understanding that peace is possible is ultimately about standing up for your own human rights. That is why we all benefit from peaceful societies that honor those rights,” said Murad shortly after accepting the O’Connor Justice Prize administered by the Sandra Day O'Connor College of Law at Arizona State University.

“This vision of peace depends on justice, healing and support for victimized communities. We must envision the reality of this, educate our children to expect it, and not be distracted by hatred.”

Murad, 26, visited Arizona to accept the honor for her bravery. She was also recognized for the work of her nonprofit, Nadia’s Initiative, which has been dedicated to rebuilding communities in crisis and advocating globally for survivors of sexual violence since 2016.

“Tonight’s celebration recognizes those who have made extraordinary efforts to advance rule of law, justice and human rights, just as Justice Sandra Day O’Connor has done throughout her illustrious career," said ASU Law Dean Douglas Sylvester. "As the voice of other survivors, Nadia Murad is the epitome of strength and resiliency. Her advocacy work around the globe has brought human rights issues to the forefront of many conversations among international leaders. We are honored to award the sixth annual O’Connor Justice Prize to Ms. Murad. She now adds to what was already a prestigious group of honorees including President De Klerk, the Honorable Mrs. Anson Chan, President Jimmy Carter, Minister Ana Palacio and Dr. Navanethem Pillay.”

About 200 people attended the award ceremony at the Omni Scottsdale Resort & Spa at Montelucia. Some of the attendees included Nina Totenberg, National Public Radio legal affairs correspondent; Arizona Congressman Greg Stanton; Arizona Chief Justice Robert M. Brutinel; and several members of the O’Connor family. The 89-year-old O’Connor was not present for the ceremony. She announced her withdrawal from public life due to illness in October 2018.

The O’Connor Justice Prize was established in 2014 to raise visibility for rule-of-law initiatives; recognize people who have made extraordinary contributions to advancing the rule of law, justice and human rights; and to honor O’Connor’s legacy.

Ambassador Clint Williamson, senior director for International Rule of Law, Governance and Security program at the McCain Institute for International Leadership at Arizona State University and a professor of practice at ASU Law, introduced Murad to the audience, lauding her life and work.

"Few people could endure what Nadia suffered and even summon the will to go on with life; fewer still could take this tragedy and muster the courage and strength to become a powerful advocate and catalyst for change," Williamson said. "But once she escaped Iraq and found safety in Europe, Nadia sought just to do that. She began speaking out about the genocide and the trafficking of women and girls in the midst of conflict." 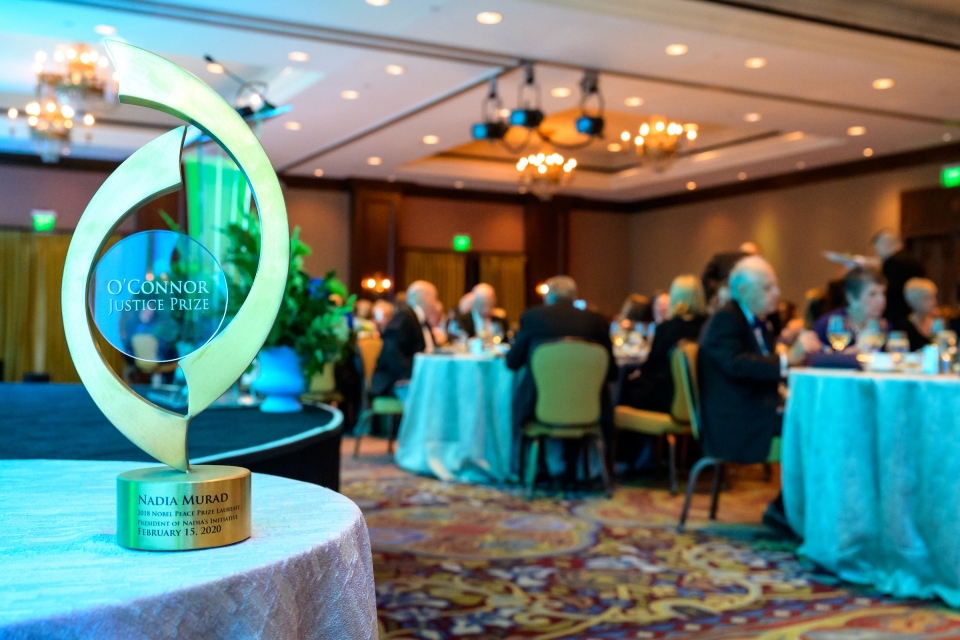 Nadia Murad is the sixth recipient of the O'Connor Justice Prize. Photo by Robert Keith

Williamson added that Murad’s compelling personal story of moving beyond tragedy and making an impact in the world has caught the attention not only of those who still suffer in the Middle East “but of policymakers, humanitarian organizations and human rights activists around the globe.”

These attacks resulted in the massacre of thousands of Yazidi men and elder women, the enslavement of 6,500 Yazidi women and girls, and displacement of approximately 450,000 Yazidis to Internally Displaced People (IDP) camps in northern Iraq. Six of Murad’s brothers and her mother were also killed by ISIS.

“Today, I have 19 nieces and nephews that will grow up without fathers. ISIS killed their fathers because they were Yazidis,” Murad said. “This is only one story of one Yazidi family.”

CBS’s Scott Pelley first broke the story in a jarring “60 Minutes” piece, which he briefly discussed last month at a Must See Mondays speaker series hosted by the Cronkite School. Obscured by a scarf, a hesitant Murad sat in front of the television camera to expose the atrocities that took place in her hometown of Kocho, a tiny farming village in Sinjar, Iraq. She said she was in school when ISIS rolled into town and started killing thousands of defenseless men and women. Boys, age 7 and older, were pulled aside and forced into the ISIS army while women and girls, some of them as young as 9, were trucked away and sold into slavery.

Months after the story aired, Murad moved to Germany, became a human rights ambassador, began learning English, set up Nadia’s Initiative and wrote a 2017 best-selling memoir, “The Last Girl: My Story of Captivity, and My Fight Against the Islamic State.” A year later, she won the Nobel Peace Prize.

Murad said despite that great honor, she neither chose nor wanted this life for herself and is on a mission to save her people and protect women worldwide from violence. At times, she said the burden and responsibility is too heavy to bear.

“As someone who was taken into captivity and witnessed firsthand the brutality of ISIS, I never thought about how difficult this kind of work would be,” Murad said. “It was only natural to try my best to spread the message about what my community endured.”

She said that even though ISIS has been largely defeated, her community continues to feel the lasting effects of genocide. Nearly 350,000 Yazidis still remain in IDP camps, and over 2,800 Yazidi women and children remain missing. Murad said enabling the return of those still missing and displaced is not only crucial to helping the Yazidis recover from the genocide but can also promote the rebuilding of trust among the different communities in Iraq.

“The Yazidi community deserves justice for the atrocities they have faced, namely the prosecution of ISIS members for committing genocide against Yazidis and other minorities,” Murad said. “We need courts that will bring perpetrators like ISIS to accountability through a fair trial … until the full scope of ISIS crimes are unearthed and justice is delivered, the Yazidi people will continue to suffer.”

Murad said this is why she founded Nadia’s Initiative — to support the sustainable redevelopment of Sinjar and enable the return of Yazidis to their homeland. She added that this step is not only crucial in helping the Yazidis to recover from genocide but can also support the process of peace and reconciliation in the region.

She said Nadia’s Initiative has several projects underway in Sinjar that address health, education, women’s empowerment and livelihoods. The organization also advocates globally for survivors of sexual violence and works to seek justice and security for the Yazidi community.

“I look to a day where I will see justice served for my mother and the countless Yazidi women, men and children who were killed in cold blood, for no reason other than being Yazidi,” Murad said.

In closing, Murad said the award has special meaning to her because of Sandra Day O’Connor’s devotion to the rule of law and judicial independence around the world.

“She is an inspiration to me and I know many of you,” Murad said. “It is a privilege to be associated with an award that celebrates her incredible legacy.”