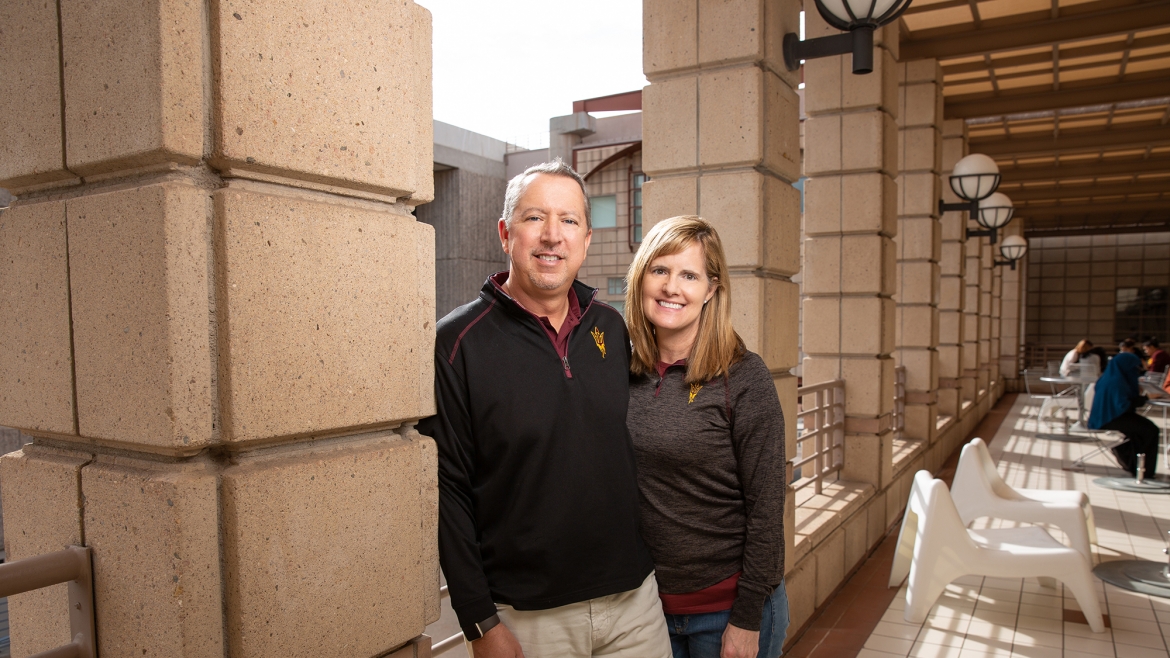 It was Introduction to Architecture at Arizona State University. He sat in the second row. She sat directly in front of him in the first row, with two guys on either side of her vying for her attention.

“I was this nerdy 17-year-old back in the second row trying to strike up a conversation with them,” Brian Swanton, urban planning alumnus '95 and master's degree in public administration alumnus '03, recalled of that August day in 1991. “But honestly, she was two years older than me and I figured that she was out of my league.”

Leah Swanton, urban planning alumna '95 and master's degree in public administration alumna '09, recalled the same initial meeting with a chuckle. “I remember he seemed really young and a little immature, but I kept an open mind... It started off as a friendship and I didn’t really imagine that first day it would turn out to what it has been now,” Leah said.

Today, 21 years of marriage and three children later, Brian and Leah Swanton, both strong figures in the Phoenix urban planning and development community, still reflect on that day as the start of their enduring love for the place and institution that brought them together.

A tight-knit family in a big school 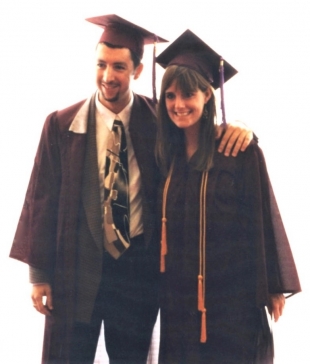 Brian and Leah Swanton at their ASU graduation in 1995. Photo Courtesy of Swanton family

Despite their initial meeting as first-year students, Brian and Leah didn’t speak to each other much until almost two years later when they both switched their majors to urban planning and were placed in the same upper-division cohort with 10 other students.

“We had 24-hour access to our own (work) studio for the entire two year period, so we were a bit of a dysfunctional family,” Leah remembers. “Twelve of us pulling all-nighters together, working on projects together, having to present in front of professionals and getting critiqued publically in front of each other, even getting torn apart to some extent. It was an interesting experience. We really all looked after each other and were like a tight-knit family.”

The emotional highs, lows and long days connected Brian and Leah to each other, and in that environment, their friendship flourished.

“There was a time when I got really sick; I wasn’t really able to make it to class and I needed some additional time on my assignments,” Leah recalled. “Brian came over and he helped take care of me. He helped talk to the professors and communicate what was going on. He contacted my mom to give her updates. He really cared, and I just kinda knew from that experience — that this guy is something special. And that’s kind of what sealed it for me.”

The two went on their first date the last semester of their senior year at Monti’s La Casa Vieja steakhouse on Mill Avenue.

Five months later, they graduated together. Two years later, they were engaged and a year after that, married.

“The thing I love about Leah the most is how she keeps me accountable and makes me a better person,” Brian said. “I was immature at 17 when she first met me and here, 46 years old, I’m still a little immature at times and she’s the rock, not only for me but our whole family. She’s always there with compassion and really thinking about other people other than herself.”

Through the years, both Brian and Leah agree that at the cornerstone of their marriage is the fact that it’s been a true partnership from the very beginning. Brian and Leah Swanton on their wedding day, March 14, 1998. Photo courtesy of the Swanton family

Brian, who also serves as an adjunct professor and a guest lecturer at ASU, is the president and CEO of the national real estate company Gorman and Company, specializing in developing affordable and workforce housing. Leah has built a 20-plus-year career with the city of Phoenix in the planning and development department, where she creates and drafts new policies that affect environmental change from a planning perspective. Today, Brian and Leah live in north Phoenix with their three teenage daughters. Their eldest, Gabrielle, is a sophomore in ASU’s Barrett, The Honors College and a marketing major in the W. P. Carey School of Business.

Despite their busy work lives, the Swantons’ ties to the community run deep with service. Both serve on several advisory boards, including one for the School of Geographical Sciences and Urban Planning, and are actively involved in their church and youth mentorship.

“Our work lives are so busy, but we still like to give back to the community together," Brian said. "We like to get outdoors, we like to travel and we like attending ASU basketball and football games together. We’re on the Herm train.”

Giving a hand to the next generation

Committed to fostering the next generation of students and giving back to the place where their story began, the Swantons have established the “Brian and Leah Swanton Urban Planning Scholarship,” a permanent endowment that will provide two annual scholarship awards to undergraduate and graduate students pursuing bachelor's degrees in urban planning or a Master of Urban and Environmental Planning in the School of Geographical Sciences and Urban Planning.

The couple referred to their own student experiences and believing in ASU’s commitment to diversity and inclusion as the inspiration for their gift.

“What I love about ASU is its commitment to inclusiveness for all socioeconomic backgrounds. However, when you are that inclusive, you have a large student body that has a real challenge of paying tuition, books and room and board,” Brian said. “We just want to do our little bit to give a hand to the next generation of ASU Sun Devils. We have a lot to thank ASU for.”

Leah agrees. “We are really blessed both in our experience at ASU, because it really shaped and molded us into who we are today and it brought us together. It basically brought our beautiful children to us, so it’s time for us to give back.”

“Every time we step on campus or get close, we beam with pride. There’s a lot of memories and they’re all a lot of good memories at ASU,” she continued. “We’re just excited about being a part of someone else’s memories. It’s their turn to have that chance.” 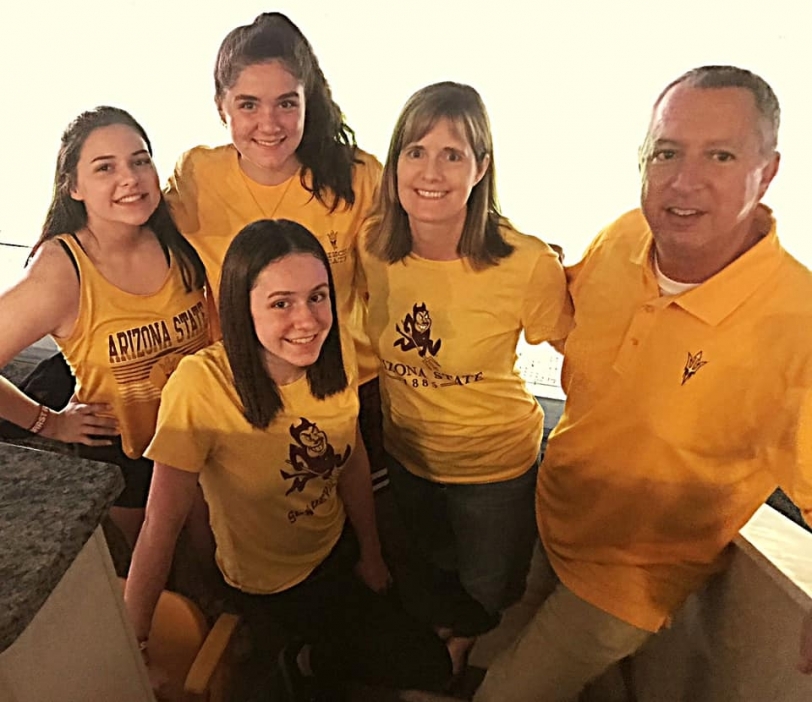 Top photo: ASU alumni Brian and Leah Swanton at the College of Design north building. The Swantons met as students at Arizona State University and stayed in Arizona to start their family and develop their careers. Photo by Deanna Dent/ASU Now

Arizona State University’s Herberger Institute for Design and the Arts is among five recipients selected from across the country to receive an award to conduct a 2020 National Endowment for the Arts Research Lab. The $150,000 award supports the Creative Health Collaborations Caregiving Research Lab, which will examine the role of three art forms in three caregiving situations: how theater might ...

Arizona State University’s Herberger Institute for Design and the Arts is among five recipients selected from across the country to receive an award to conduct a 2020 National Endowment for the Arts Research Lab. The $150,000 award supports the Creative Health Collaborations Caregiving Research Lab, which will examine the role of three art forms in three caregiving situations: how theater might support families of children with special needs; how a smartphone app designed for easy journaling can assist families of cancer patients; and how music aids families of veterans with post-traumatic stress disorder.

Now in its fifth year, NEA Research Labs investigate the value and impact of the arts through the social and behavioral sciences for the benefit of the arts and non-arts sectors. The labs are housed at different universities and use transdisciplinary research teams to explore specific research questions in the areas of health, cognition and innovation. To date, 17 labs make up this growing national network. 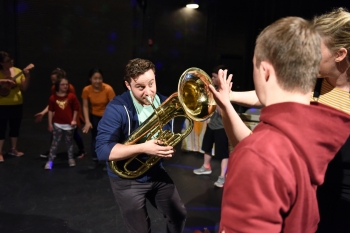 At the intersection of art and health: ASU Theatre for Youth students worked with visiting artist Tim Webb to develop a performance for young people with profound and multiple learning disabilities in 2019. Photo by Tim Trumble Download Full Image

“We’re grateful to the NEA for its understanding of, and support for, the idea that design and the arts have something powerful to offer health care providers and caregivers,” said Steven Tepper, dean and director of Herberger Institute for Design and the Arts. “This is yet another area where we as a society have not fully availed ourselves of the assets that artists and designers have to offer, and ASU is eager to be in the lead there.”

“We know in our bones that the arts, design and humanities have something to do with healing, for both individuals and communities," said Underiner. "Creative Health Collaborations is about trying to understand how, and why, and under what circumstances this is so. If we can start to build the right kind of evidence, in collaboration with colleagues in the health sciences, then integrating the contributions of arts, design and humanities into regular health care practices and settings will more and more become the norm — for the benefit of all. And where else but ASU to do that kind of work?"

Underiner said that the new Caregiving Research Lab supported by the NEA will bring community arts partners together with researchers in Herberger Institute, nursing, health solutions and humanities to help caregivers access creative resources not otherwise available to them and their loved ones. "Studying the effects on their relationships and well-being will help us understand the role the arts, design and humanities can play in broader health outcomes and help to build that evidence base,” Underiner said.

The lab will study the health-supporting role of the arts in different types of caregiving contexts and via a range of participatory arts experiences involving both caregivers and their loved ones. The lab’s first set of activities will be in partnership with Childsplay Theatre Company, involving workshops with families of children with special needs. Underiner and Coon serve as co-principal investigators. Creative Health Collaborations team members Reifsnider and Langer are co-investigators, while School of Film, Dance and Theatre Professor Stephani Etheridge Woodson joins the team as an investigator.

Parallel to the lab’s research activities will be the development of collaborative research and practice frameworks that will be of use to others interested in working in this intersectional space.