The School of Film, Dance and Theatre play opens on Valentine's Day

Whimsy, comedy and a powerful message about the importance of understanding emotion are at the core of “The Snow,” an upcoming School of Film, Dance and Theatre production that opens Feb. 14 at Arizona State University.

Snow falls on the village of Kishka in amounts so massive that it may flood the city when it melts — only it doesn’t melt. Winter comes and goes, but the snow remains. The villagers all agree that something needs to be done. Young Theodosia Sutton and her team of heroes and heroines, who are much braver than her, catapult themselves beyond the snow to find its source. Theodosia’s action-packed journey reveals the mysterious truth about the village’s past and her future. 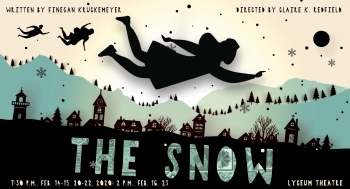 Written by Australian playwright Finegan Kruckemeyer, who has created 92 plays for children and adults alike, “The Snow” is a tender envisioning of how the world could be, incorporating magic, humor and youth empowerment into a multimedia performance for all ages. School of Film, Dance and Theatre graduate student Claire Redfield will direct the play, which runs through Feb. 23 at the Lyceum Theatre on ASU’s Tempe campus.

“It’s very funny,” Redfield said. “There is a bit of a Monty Python feel. You will cry and laugh, all while reflecting on where you come from and your ancestry.”

In the original script, “The Snow” told the tale of a young boy, Theodore, rather than that of a young girl. Redfield made this change just prior to casting in order to showcase a female lead. The role of Theodosia Sutton will be played by Bronwyn Doebbeling, an ASU freshman studying theater and economic thought and leadership.

“It’s kind of a whimsical engagement with the power of children,” Doebbeling said. “At it’s core, it’s a story that is deeply impactful and moving.”

Redfield said “The Snow” reflects on the power of youth to enact change in our communities.

“There is a passion for the youth, as it teaches them about trauma, saying no and feeling sad,” Redfield said. “Parents and adults normally don’t want children to experience these things in live theater, but this play does a great job of portraying the importance of emotions.”

For the music, composer Alicia Castillo, a student in the School of Music, is collaborating with Zachary Bacskay, a sound designer and student in the School of Film, Dance and Theatre. Audiences will hear their musical sequences played throughout the performance. The school hopes to continue similar collaborations with artists in other schools in the Herberger Institute for Design and the Arts, and throughout the rest of ASU, in its future productions.

Redfield said the show is not just for kids, but for everyone.