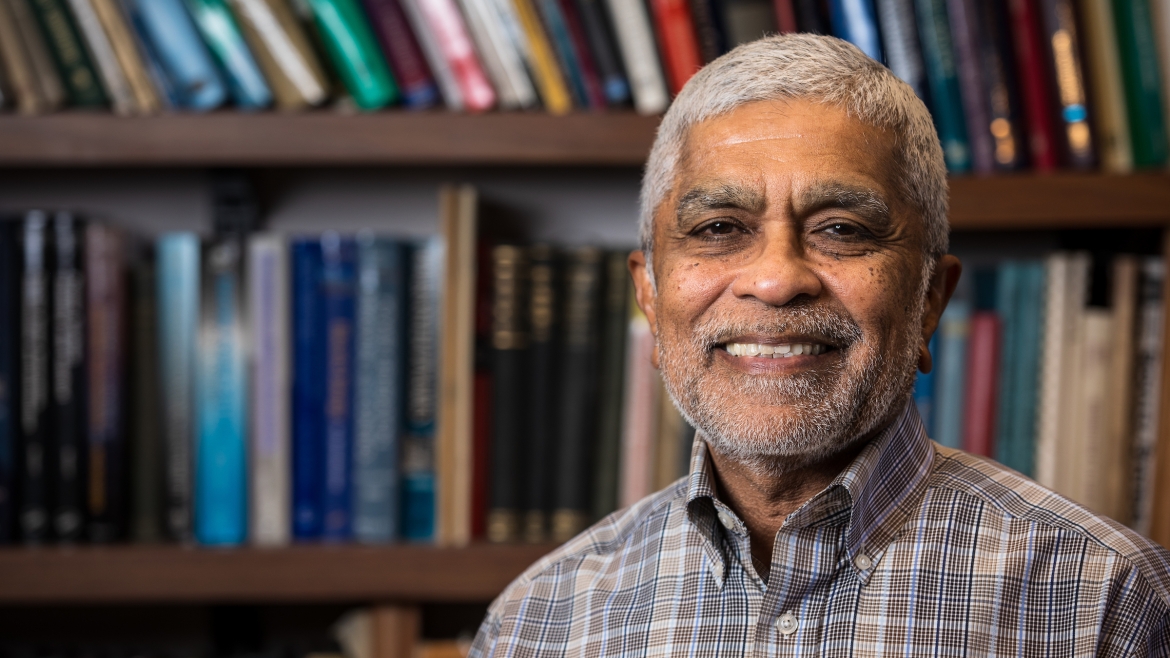 Vijay Vittal was inspired to go into power grid engineering during his undergrad days at the B.M.S. College of Engineering in Bengaluru, India.

“I took this course in power system analysis,” Vittal said. “It was a senior elective. The instructor was an excellent instructor. That’s what inspired me to take this field.”

He not only took it — he mastered it. Vittal is one of the newest faculty members at Arizona State University to be named a Regents Professor. The title is the highest academic honor, awarded to scholars who have made significant contributions to their field and are recognized nationally and internationally by peers.

“It’s a mixture of several problems, so we have to attack it from many viewpoints,” he said. “How do you account for proper grid performance when the resource itself is variable? … The goal always is reliable electricity at an affordable price. Economics plays a very big role. You cannot keep arbitrarily increasing the cost of energy.”

Vittal has developed pioneering methods for dealing with fluctuations on the grid because of renewable energy inputs. He has developed the theory and application of “islanding” to isolate parts of the power grid to prevent a disastrous cascade of outages.

He has won every significant distinction in his field. He has been named a fellow of the Institute of Electrical and Electronics Engineers and was elected to the U.S. National Academy of Engineering, the highest honor for engineers in the United States.

In the Arizona Board of Regents citation for his Regents Professorship, one reviewer said, “He is a leading researcher in power system dynamics. … MIT’s Technology Review identified 'power grid control' as one of the '10 emerging technologies that will change your world,' and cited Dr. Vittal as one of the five leading researchers in the world in preventing power system blackouts.”

Another reviewer stated, “Dr. Vittal is without question the No. 1 scholar globally in power system dynamics and is amongst a handful of scholars that lead the broader area of power system engineering in the world.”

Of all Vittal’s accomplishments, he is most proud of the students he has trained, many of whom have gone on to prestigious positions around the country and globe.

“They have gone out and become very successful,” he said. “My first PhD student was someone older than me. He came from Korea. … He had done his undergraduate degree and due to family circumstances had to go work. He actually changed his field and worked as a construction manager in the Middle East.”

When he was financially stable, he decided to go back to school and earn a master’s degree and PhD.

“When he finished, he went back to Korea, joined this place called Korea Electrotechnology Research Institute, became the vice president, and he eventually became the chief electricity regulator for South Korea,” Vittal said. “It was very satisfying.”

Vittal also is the director of the Power System Engineering Research Center. Headquartered at ASU, the center is a program of industry and university cooperation. There are 11 other universities and 30 member companies, mostly utilities and system operators.

They deal with the delivery of energy from the generation side until close to the customer — think big overhead power lines. They work on transmission design, analysis tools, hardware, algorithms and modeling, and cybersecurity. Gary Dirks, director of ASU's LightWorks, called the team “arguably the best transmission group in the country — perhaps even in the world.”

There’s just something about a good, old-fashioned family drama that never fails to captivate an audience. But the characters in Arizona State University Professor Joan Silk’s version of “Dynasty” are even more wild — and quite a bit hairier — than Joan Collins.That’s because Silk, who teaches courses in ASU’s School of Human Evolution and Social Change, has spent four decades stud... 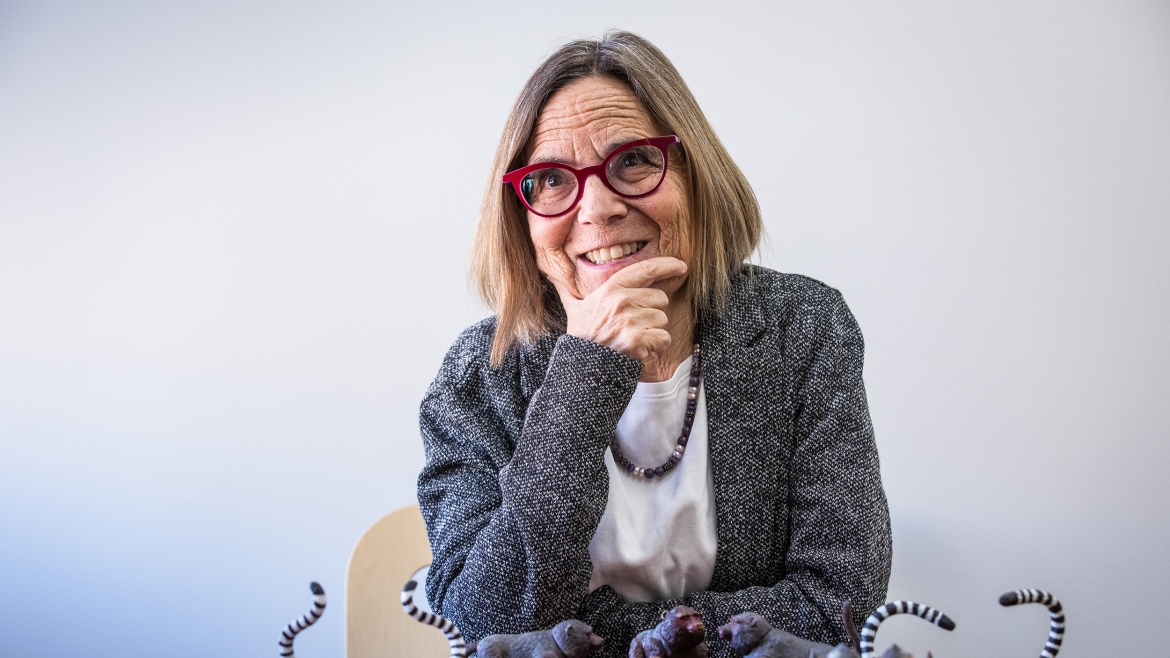 ASU primatologist Joan Silk is thankful for the female camaraderie in her field.
Silk says observing baboons is "like watching a soap opera."
February 7, 2020

There’s just something about a good, old-fashioned family drama that never fails to captivate an audience. But the characters in Arizona State University Professor Joan Silk’s version of “Dynasty” are even more wild — and quite a bit hairier — than Joan Collins.

“It’s like watching a soap opera,” she said of her time in the field observing chimps and baboons from afar. “You get to know the animals as individuals, and you get to know them really well and know their histories.”

Silk, who is recognized internationally as a leader in the study of primate and human behavioral evolution, was recently named a Regents Professor, the highest faculty award possible at ASU.

“It's a huge honor, and it's quite lovely,” she said. “I really like being at ASU. They've given me great opportunities, and I'm a great admirer of the institution and I think that President Crow is an inspiring leader. So I'm delighted to be here.”

Silk’s love of primatology began in high school when her mother bought her a copy of Jane Goodall’s “In the Shadow of Man” and took her to see the famed primatologist deliver a public lecture. Silk then pursued the field as an undergraduate at Pitzer College in California, showing enough promise that she was invited to take an upper division seminar as a freshman and, later, to spend her senior year in Africa studying chimps. Silk fell in love with the continent then, and has since spent many a long summer in countries from Kenya to Botswana, studying the behavioral and reproductive strategies of female baboons.

“You're standing out there watching the baboons, and then a group of elephants walks by, or a herd of buffalo or wild dogs, and it's just amazing,” she said. “And I really like the savannas. Just these big open habitats surrounded by mountains. I think all landscapes should have mountains at the horizon.”

Though she treasures her time in the field, Silk said most of her time is actually spent in the lab analyzing data. Over the course of her career, that time has yielded a number of discoveries, but one recent finding that sets her apart from other researchers has to do with the close relationships female baboons form with one or two adult males after giving birth. Using DNA samples obtained from feces, Silk and her team were able to determine that those males were often the fathers of the offspring.

“That supports the idea that this is a form of joint parental care, which hadn't been documented at all in baboons before,” she said. “It's just a little brick in the wall, just another increment, but we think that's a novel finding that may well apply to future research.”

But most of Silk’s research has focused on relationships female baboons have with other females. Her findings there show that those relationships are usually formed between relatives — often mothers and daughters — and that they serve an evolutionary purpose: Baboons live stressful, unpredictable lives in which they are almost always on the lookout for predators — and even attacks from individuals in their own groups. But when females are able to form strong social bonds with one another, it reduces stress and positively impacts lifetime fitness and the number of surviving offspring they have.

The most exciting part of these findings is that there’s a good possibility they apply to a number of other species — maybe even humans.

“On the one hand, understanding the way evolution shapes behavior in nature is just intrinsically interesting. It's like understanding how gravity works. It's just basic, fundamental knowledge that helps you understand the world better,” Silk said. “On the other hand, primates are interesting because they provide some insight about how we got to be the way we are and how evolution shapes behavior of creatures who are very much like us in some ways.”

With such an iconic role model as Goodall, Silk said it never occurred to her she couldn’t be a woman and a scientist, and she considers herself lucky to be in a field where women are rather prominent (some other well known female primatologists include Dian Fossey, who is known for her work with mountain gorillas, and Birute Galdikas, who is recognized as a leading authority on orangutans) and in which she has found much camaraderie. Once, Silk discovered she and a fellow female colleague were writing a paper on the same subject. Rather than race her to publication, Silk said she decided it made more sense to work together.

“I'd much rather shift the dynamic from a competitive one to a collaborative one, and then I'm much happier and much less stressed,” she said, acknowledging that it’s difficult to hear that and not draw a comparison to the benefits she has personally observed of female baboons’ prosocial bonds.

Other collaborators of Silk’s include none other than her husband, fellow School of Human Evolution and Social Change Professor Robert Boyd, who studies and teaches cultural evolution. Their book, “How Humans Evolved,” is now in its eighth edition.

“I think that in terms of my real impact on educating future generations of students, that book is really important,” Silk said.

As a professor, she loves to see her students get excited about evolution, even — and perhaps especially — when it’s not their chosen field of study.

“My job is to surprise them with how interesting all of this is,” Silk said. “I teach a lower division class, where I think it's super important, because this might be the only class that some of these students will ever take where they really are exposed to the principles of evolution, which are extraordinarily powerful for understanding how the world works.

“The logic is so simple, so compelling and so accessible. And I think (exposing students to that) is just a fantastic thing that (educators) can do.”

Top photo: ASU Regents Professor Joan Silk has collected an assortment of primate figurines over her 40 years as a primatologist. Photo by Charlie Leight/ASU Now