Watching videos online and answering generic true/false questions. Posting into the void of a discussion forum and expecting little response. Feeling like user No. 237 rather than being acknowledged as an individual student with independent ideas. Spending more time figuring out how to use a new platform than extracting value from its content.

These are the sort of problems that might come to mind when we think of technology in the future of education — when technology is used poorly in the education sector, it can depersonalize and frustrate. 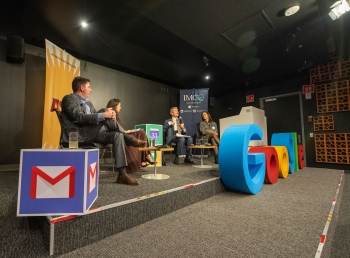 But when educational technology is used well, when technological innovation prioritizes the needs of students and teachers, then its power is transformative.

So how do we get there, to this place where technology meets students where they are and helps them fulfill their full potential?

Technology with a purpose

Georgina López Guerra, the founder and director of Continuum, set the stage for the discussion at Google with two questions that should shape the way we think of the future of educational technology: “Education to what end?” and “Technology to what end?”

“For us it’s not about bringing technology just to bring technology,” said Jimena García, the head of Google for Education in Mexico.

García highlighted that back in 2006, ASU was one of the first universities to deploy Google’s G Suite for Education, which uses online tools to empower students and educators and to close global equity gaps in education.

ASU’s incorporation of technology is based on the university’s mission of supporting universal and lifelong learning, explained Luke Tate, the managing director of ASU’s Office of Applied Innovation and former special assistant for economic mobility to President Barack Obama.

The idea behind universal and lifelong learning, Tate added, is that everyone should be able to access a high-quality education, regardless of where they come from or where they are. Hence ASU’s efforts not only to deploy technology to enhance the education of on-campus students, but also to expand learning opportunities to everyone from refugees and displaced persons to Starbucks employees.

Looking not only to expand its mission to adult populations, the university is also using data to assess the K–12 public education system in Arizona, Tate explained. The goal is to proactively identify, with the use of AI, what kind of support individual students might need in order to make it to college — and then to deliver that support.

Educating for the future

Of course, one of the major challenges in the education space is that an estimated 65% of children will ultimately perform a job that does not yet exist. So how do we prepare students for those jobs?

The answer is to focus education on developing skills, such as the ability to be able to learn for oneself, said Rafael Rangel Sostmann, special adviser to President Michael Crow and the former president of the Instituto Tecnológico y de Estudios Superiores de Monterrey, one of the largest and most prestigious universities in Latin America.

Tate stressed the importance of ASU’s charter commitment to be “measured not by whom it excludes, but by whom it includes and how they succeed” — it’s that promise that drew him to join the university upon leaving the White House. And the smart deployment of new technology, with that question of “to what end” having been answered, is instrumental to deliver on the charter.

Alexandra Zapata, the deputy general director of the Instituto Mexicano para la Competitividad — which has produced groundbreaking research and policy advocacy to empower citizens’ participation in their children’s education and hold educational institutions more accountable — explained that one of the key challenges to effectively expanding education technology and accessibility in Mexico is overcoming a mindset summarized by the phrase in Spanish “No te pongas creativo,” or “Don’t get creative.”

We need to change from “a generation of parents that told you ‘Don’t get creative’ to one that tells you, ‘How can I help you be more creative?’” she said.

Migrant women and girls who experienced violent crime are more likely than nonvictims to have health problems and face barriers to vital health care here in Arizona, a new Arizona State University study has found.The study, published in December in the American Journal of Public Health, is a first-of-its-kind, large-scale survey of Somali women and girls in Arizona that shows the health effects of...

Migrant women and girls who experienced violent crime are more likely than nonvictims to have health problems and face barriers to vital health care here in Arizona, a new Arizona State University study has found.

The study, published in December in the American Journal of Public Health, is a first-of-its-kind, large-scale survey of Somali women and girls in Arizona that shows the health effects of victimization, defined by researchers as homicide, violence, sexual assault, arson and kidnapping. More than 7,000 Somalis seeking either refuge or political asylum have arrived in Arizona since 1992, the fourth-highest total of any state, according to the Centers for Disease Control and Prevention. Yet, they remain what study co-authors Kathleen A. Fox and Crista Johnson-Agbakwu of the Watts College of Public Service and Community Solutions call a hidden population.

Their research sheds light on how Somali women and girls use health care in the U.S. and points to the need for a larger, statewide discussion of health issues faced by underserved populations like the Somalis in Arizona. Research also suggests the Somalis’ largest impediments to health — transportation and child care — are solvable through subsidized child care programs, more funding for ridesharing and hiring community health care workers for hard-to-reach populations.

Many longtime Arizonans may not know that Somalis as well as nationals from several other countries have found refuge or asylum in the state, said Fox, an associate professor in the School of Criminology and Criminal Justice.

But many Somali women and girls victimized by violent acts have significantly more health problems and greater difficulties gaining access to health care compared to nonvictims, said Johnson-Agbakwu, a physician and research associate professor in ASU’s School of Social Work and the Southwest Interdisciplinary Research Center.

“There is among them a major distrust in the health care system and a disconnect among perceptions of health and wellness,” Johnson-Agbakwu said.

Somalis who are unable to speak or understand English well are also often not as knowledgeable about factors affecting their health or how to treat them, she said. Additionally, they are less likely to have a designated place to receive care in Arizona than nonvictims, and tend to rely more on emergency care, which is more costly and yields worse outcomes, she said.

“It’s a major impediment to becoming self-sufficient, healthy and productive in the U.S. for many of the female Somali refugees and asylum seekers,” Johnson-Agbakwu said.

While noting that violence against women is a “global and pervasive problem,” the researchers found that Somali women and girls in particular are at very high risk for domestic violence, child abuse and involuntary family separation.

Fox and Johnson-Agbakwu cited the World Health Association (WHO) statistics saying that female genital mutilation/cutting (FGM/C) is prevalent worldwide, with 98% of all women in girls in Somalia affected. FGM/C also puts women and girls at increased risk for obstetric and gynecological complications, as well as depression and post-traumatic stress disorder, according to the WHO.

The study also calls for Arizona health care professionals and their staffs to become better educated about culturally appropriate care for migrants; hire linguistically and gender-congruent providers and support staff; engage in community outreach to build trust and enhance health literacy; accommodate needs for child care, flexible hours and transportation for mothers of young children; and extend outreach to crime victims in both health care and community settings.

“These community health workers are cultural health navigators who can share experiences and bridge those gaps in critical ways,” Johnson-Agbakwu said.