The San Manuel Band of Mission Indians made a $5 million gift to Arizona State University to provide for the renovation of the historic Herald Examiner Building in Los Angeles and to establish an endowment to support the Indian Legal Program’s Indian Gaming and Tribal Self-Governance programs at the Sandra Day O’Connor College of Law at ASU.

"The generous gift from the San Manuel Band of Mission Indians will continue to ensure that we offer a world-class legal education for citizens of tribal nations and prepare them for careers in such fields as Indian gaming and tribal self-governance," ASU President Michael Crow said. "Through this generous gift, our students will have opportunities to interact with and learn from the best professors and, if they so choose, study in Los Angeles.” 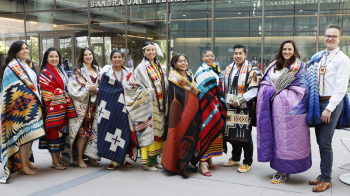 The San Manuel Band of Mission Indians made a $5 million gift to ASU to provide for the renovation of the historic Herald Examiner Building in Los Angeles and to establish an endowment to support the Indian Legal Program at ASU Law. Here, several students pose during the blanket ceremony at spring 2019 convocation. Download Full Image

Based in southern California near the cities of San Bernardino and Highland, San Manuel administers a robust program of philanthropy, which prioritizes the program areas of education, health care, community development and programs that promote the arts, museums and initiatives that protect the environment. Since 2003, the tribe has contributed more than $260 million in support of nonprofit organizations and community groups, including Indian tribes and native nonprofits.

ASU Law’s Indian Legal Program was established in 1988 to help break down these barriers, and to provide legal education and generate scholarly writing in the area of Indian law. The Indian Legal Program has become one of the best Native law programs in the nation, recognized for its strong partnerships with American Indian tribal communities and growing relationships with Indian nations and organizations nationally.

“We are pleased to fund an endowment to support the Indian Gaming and Tribal Self-Governance programs within ASU Law’s Indian Law Program,” said Chairwoman Lynn Valbuena, San Manuel Band of Mission Indians. “Tribal nations today are facing critical economic and governance challenges in an increasingly complex world, which will require highly educated tribal citizens to navigate a path to the future. These programs at ASU will provide a means for tribes to achieve self-determination.”

The San Manuel gift will support increasing educational opportunities in the field of Indian law, the expansion of work experience for students interested in Indian law and will contribute to the development of Indian law trainings for Indian tribes and organizations.

The Indian Legal Program is also home to one of the highest concentrations of Native American and Indian law students in the nation. To date, over 360 students have graduated from the program — representing over 100 tribes across the country — serving state, federal and tribal governments and working in private practice. 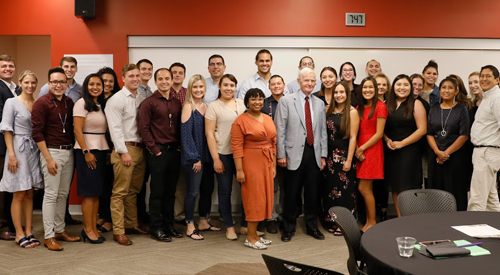 Of the $5 million gift to ASU, $2.5 million will benefit capital improvements to renovate the historic Herald Examiner Building in Los Angeles. The 1914 five-story building is listed as a Los Angeles Historic Cultural Monument and is being restored to its original Spanish Colonial structure.

In April 2019, the Arizona Board of Regents approved the building lease for ASU to expand its presence in California at the Herald Examiner Building. About 12,000 California residents call ASU home for their education. The building is scheduled to open in 2021, and ASU will occupy 87% of the space for programming, collaboration, outreach and research for several of its schools.

We live in a data-driven world. Thanks to the ever-connected climate made possible by the internet and mobile personal devices, we are both creators and insatiable consumers of information. What’s more, thanks to the capabilities of modern data processing and the current demand for an individual and customized experience, an incredible amount of time and energy is devoted to tracking, understand...

We live in a data-driven world. Thanks to the ever-connected climate made possible by the internet and mobile personal devices, we are both creators and insatiable consumers of information. What’s more, thanks to the capabilities of modern data processing and the current demand for an individual and customized experience, an incredible amount of time and energy is devoted to tracking, understanding, and predicting everything from shopping habits to weather patterns to viral twitter feeds.

So is it any wonder that physicists and biologists are finding inspiration in these same tools to unravel some of life’s most important questions?

While there are plenty of elements that come together to form what we think of as “life,” on a fundamental biophysical level, life happens one molecule at a time. Chemical reactions, replication of DNA, communication between molecules within a cell, this is where it happens, and we watch it unfold in real-time.

While we may not be quite there yet, new research developed by scientists from Arizona State University, Indiana University – Purdue University Indianapolis (IUPUI), and the University of California, Davis brings us a step closer. In a paper published in Physical Review X, ASU Associate Professor Steve Pressé and IUPUI graduate student Meysam Tavakoli, as well as other collaborators, draw on mathematical methods not typically seen in the natural sciences to create a faster modeling system to learn about the motion of molecules.

One traditional method of monitoring molecules in motion is a process called fluorescence correlation spectroscopy. This technique employs a tightly focused laser beam to illuminate fluorescent molecules as they travel across the beam, and extrapolates information about these molecules' movement and location from large quantities of data gathered over an extended time period – often as long as 10 minutes.

While this widely used method has provided valuable insight into the workings of many molecular processes, it is not without limitations.

The process takes a significant amount of time since it requires a large quantity of data to analyze. The results reflect averages of a “downsampled” measurement, similar to a representative sample in a poll or a census.

While analyzing averages sheds light on a topic or question, it can also paint a limited — or even — picture of real life, failing to represent refined depictions of distance, time or individuality.

To provide an example, Pressé suggested imagining you were trying to learn about a person’s location, and this person lived on one coast while making frequent visits to family members on another coast. The “average” location across an extended period might place them somewhere in between — a location that would tell you almost nothing about how this person lives or spends their time, nor would it enable you to say where that person was at any given time.

Therefore, the question becomes, how do we gather and process data in a way that provides us with more timely information? Monitoring individual molecule behaviors presents a similar challenge.

New math for a new problem

Rather than broad snapshots over time, Pressé and his team are expanding the capabilities of the traditional fluorescence correlation spectroscopy method by employing new mathematical tools.

The ability to collect and analyze near-immediate feedback could allow the observation and study of chemical reactions and other molecular processes that take place on a faster time scale than we have previously been able to record. Moreover, because more information can be gathered in a dramatically shorter period, the span of the overall experiment can be likewise shortened. This could reduce the toxic effect of prolonged laser-exposure of the molecular samples under study, particularly valuable when examining living cells.

New techniques and mathematics excite the possibility of unlocking further mysteries as the method continues to develop.

“Looking at the behavior of individual molecules from single-photon arrival could potentially be used to understand the interaction between many different molecules, and more complex reactions,” Pressé said.