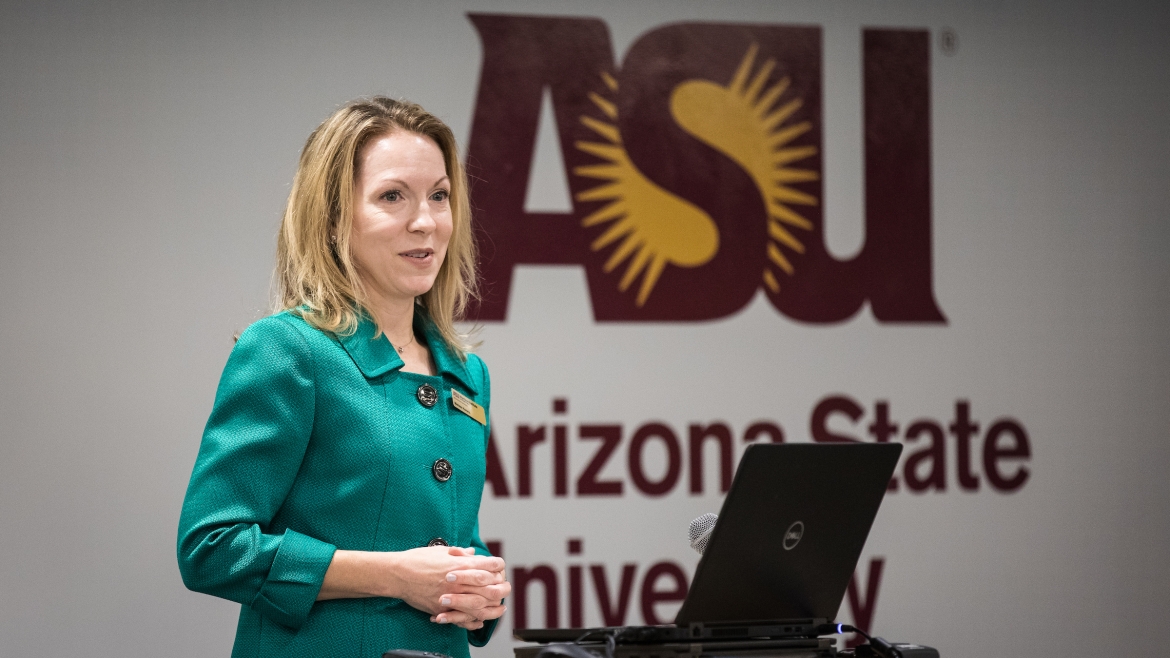 Data project to investigate, report gun deaths is a step toward preventing violence

More than 3,100 people in Arizona died from firearms from 2015 to 2017 and 71% of those deaths were suicides, according to a new report released by Arizona State University.

The report, presented Wednesday by the Morrison Institute for Public Policy at ASU, includes a detailed breakdown of types of firearm deaths and the victims, with the intent to use the data to prevent gun violence in Arizona.

“This is information that’s crucial to our understanding of firearm deaths in Arizona,” said Melissa Kovacs, associate director for research for the Morrison Institute, who is co-author of the report.

“What we’re talking about might feel foundational or basic and might raise more questions than it answers, and we have a lot of questions ourselves.”

• Firearms were used in 59% of all suicides and in 69% of all homicides in Arizona during the period.

“You can see the numbers have gone up but Arizona’s population has increased in this time as well,” Kovacs said, noting that it’s important to consider the rate per 100,000 and not just the numbers.

The report is a collaboration between the Morrison Institute and the Center for Violence Prevention and Community Safety, both in the Watts College of Public Service and Community Solutions at ASU. The center houses the Arizona Violent Death Reporting System, which draws data from law-enforcement agencies, death certificates, medical examiner reports and other sources, such as hospitals. In 2015, the state system began a partnership with a national reporting system that’s part of the Centers for Disease Control, with the goal of creating a set of high-quality data to help prevent violence. 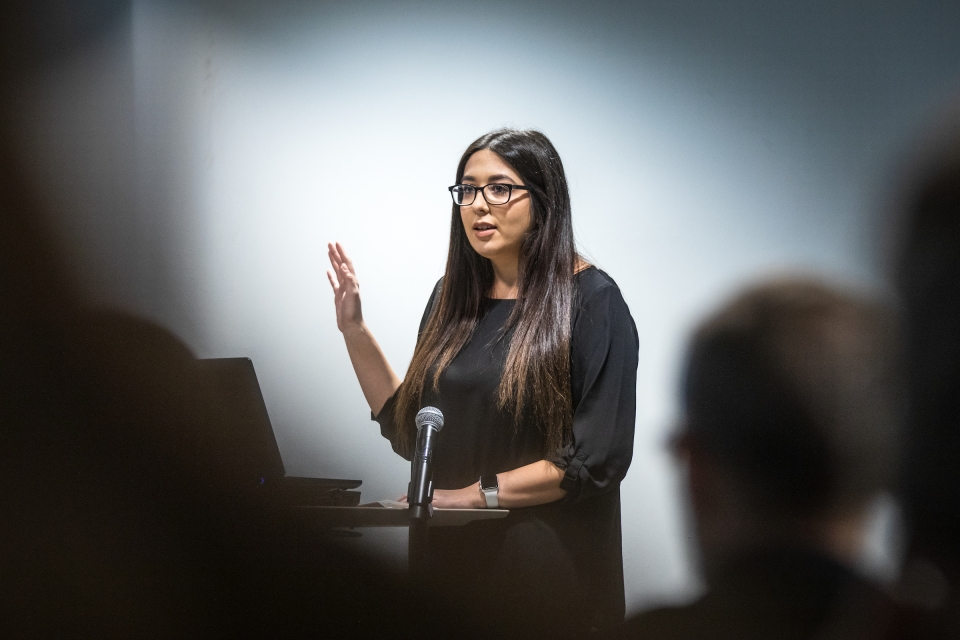 Melissa Gutierrez, a graduate student in the School of Criminology and Criminal Justice, presents part of the report on firearm deaths in Arizona. She's worked on the project since she was an undergraduate. Photo by Charlie Leight/ASU Now

Besides homicides and suicides, the researchers also looked at the 42 unintentional firearm deaths in Arizona in the time period. There were five in 2015, 12 in 2016 and 25 in 2017.

“These represent pretty notable increases and this is something we’re all hoping is not a trend,” Kovacs said.

While there is a big set of data, it’s filled with holes, for two main reasons: poor reporting by the participating agencies or nonparticipation, according to David Choate, senior research analyst at the Center for Violence Prevention and Community Safety.

Significantly, Maricopa County Sheriff Paul Penzone withdrew his agency’s participation in the Arizona Violent Death Reporting System when he took office in 2017. The Arizona Department of Corrections and the FBI also don’t participate.

“We’re also hampered by the quality of information,” Choate said.

“When you read a law enforcement report and the entire narrative summary says, ‘See Medical Examiner’s report,’ we’re not getting a lot of information. We get a substantial number of reports with such thin information that we’re unable to code anything.”

The presentation also included policy recommendations by Charles Katz, director of the Center for Violence Prevention and Community Safety. 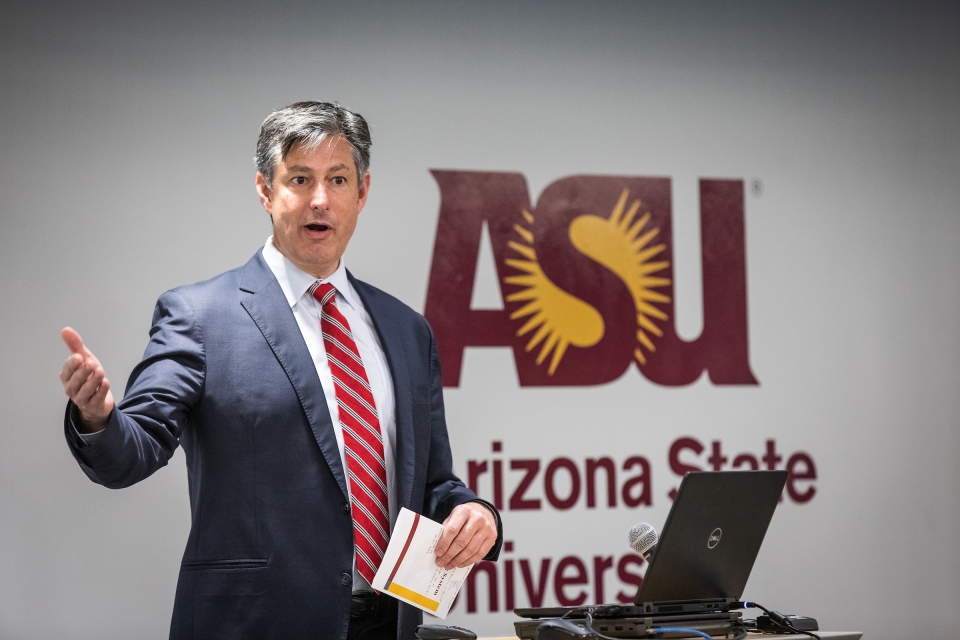 Charles Katz, director of the Center for Violence Prevention and Community Safety at ASU, discussed his policy recommendations for reducing firearm deaths in Arizona, including launching an education program to encourage people to lock up their guns. Photo by Charlie Leight/ASU Now

“One of the things we’re repeatedly asked for is our recommendations, whether it be for statutes, ordinances, policies or practices, and most of the time, we stay away from it because it gets in the way of our primary role of shedding light on what the real problems are,” he said.

“But we have been repeatedly requested to make recommendations and we’re starting to move in that direction very conservatively,” said Katz, who also is a professor in the School of Criminology and Criminal Justice.

Katz’s 10 recommendations for communities to consider, most of which have been based on randomized control trials, are:

2. Use a “focused deterrence” strategy to fight violent crime, which identifies the “worst of the worst” offenders, who are provided with intervention and social services with the caveat that they will be prosecuted quickly if they stray. “It’s one of the most well researched programs out there that shows there’s at least a medium effect.”

3. Use “Operation Peacekeeper,” a program in which “violence interrupters” work on the streets.

4. Consider “hot spot” policing, in which resources are focused on small areas where violence is the worst.

9. Revoke stand your ground laws because research shows that states that adopt these laws see a small increase in homicides.

“In some years that we’ve examined the data, when you combine homicides and suicides, American Indians have the highest rate of violent death in the state,” Katz said.

But no one is sure of the Native American population, both on and off reservations. Census data varies widely from tribal counts, he said.

In addition, tribal agencies do not participate in the Arizona Violent Death Reporting System.

“We’ve had to call each nation and try to collect that information and we’ve just made a small dent,” he said.

“The bottom line is that when you call them and ask for it, they say no. It’s their data and they’re permitted to share it with whomever they like.”

Even with all the numbers, the researchers were able to keep the bigger picture, according to David Schlinkert, senior policy analyst for the Morrison Institute, who is co-author of the report with Kovacs.

“Sometimes, when we aggregate quantitative data, you’re less able to see what you’re really talking about. Melissa and I have been looking at this data for 10 months now, and the stories in there are about people,” he said.

“The deaths are violent and it’s not the most pleasant thing to think about. But when we say that number — 3,188 — those are all individual people with lives and stories.”

Arizona State University School of Arts, Media and Engineering assistant professors Suren Jayasuriya and Robert LiKamWa have been awarded the Research Experiences for Undergraduates (REU) site award from the National Science Foundation. The REU program supports undergraduates around the country who wish to participate in active research in any of the areas of research funded by the National Scienc...

Arizona State University School of Arts, Media and Engineering assistant professors Suren Jayasuriya and Robert LiKamWa have been awarded the Research Experiences for Undergraduates (REU) site award from the National Science Foundation. The REU program supports undergraduates around the country who wish to participate in active research in any of the areas of research funded by the National Science Foundation.

Jayasuriya and LiKamWa said their plan is to explore research underlying new emerging forms of visual media, including computational cameras and projectors as well as virtual/augmented/mixed reality systems. Selected students will participate in a 10-week long experience where they will embed themselves into labs of faculty mentors, conduct research and develop skills including preparing demonstrations and presentations, scientific/technical writing and public speaking. There will also be opportunities to present their research in public venues and share demonstrations of their prototypes with the public. Research being done in the ASU Meteor Lab, which includes designing computer systems for augmented senses, is one example of the type of research undergraduates will focus on for the project. Download Full Image

We spoke to Jayasuriya about the grant.

Question: What are your plans for the grant?

Answer: The plan for the grant is to immerse students at the intersection of engineering, computer science and the media arts. We plan to host this REU site every summer for the next three years, and students, after the program is over, will have the opportunity to submit their research to academic conferences or journals. It will also serve to broaden the network of individuals who pursue this interdisciplinary research. Students will be able to engage with the Digital Culture Summer Institute for outreach with middle and high school students, as well as interact with industry members through the SenSIP Center to expand the set of experiences they have while conducting research.

Q: Are there any undergraduates already in collaboration with this?

A: Only informally, through undergraduates in our own research labs or through collaborators, but we hope to recruit the first group of students for summer 2020. We want to attract students at ASU, as well as from across the country, to introduce them to the exciting research that occurs here.

Q: Do you have any research plans in mind for this program?

A: We plan to focus on visual computing research as a broad topic. Some examples include existing research threads going on in our labs. In the Imaging Lyceum, we are pursuing research for non-line-of-sight imaging (seeing around corners), light transport, image-based rendering and physics-based computer vision. Research in Meteor Studio includes designing computer systems for augmented senses in AR/VR/IoT, efficient and performant visual computing systems, and augmented content frameworks. In addition, we have a host of other faculty members across the School of Arts, Media and Engineering and the School of Electrical, Computer and Energy Engineering who will be participating with their research interests to help broaden the vistas for undergraduate researchers who participate in the REU.