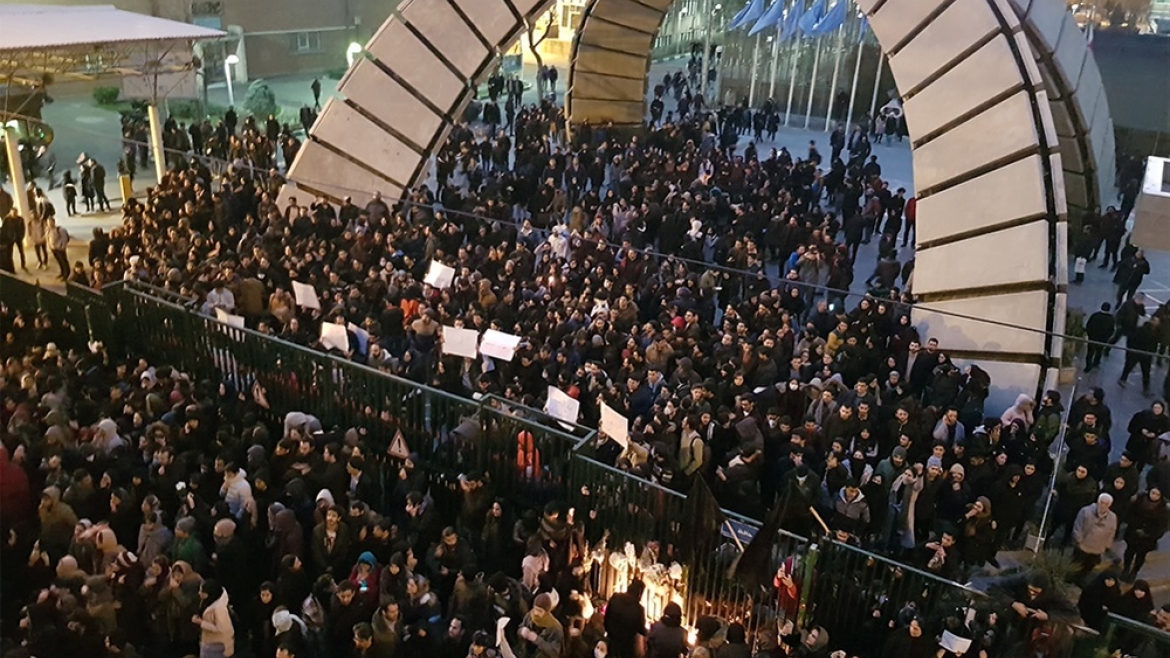 The School of Social Transformation and Herberger Institute to co-sponsor ‘Understanding Iran: A Conversation with Pardis Mahdavi’

The Islamic Republic of Iran is a pressure cooker of politics, poverty, theocracy and paramilitary force. Experts say that after more than 40 years of power, the Iranian government is in danger of losing control.

The termination of a nuclear deal, crippling economic sanctions, female activists calling for change, assaults on oil infrastructure in Saudi Arabia and the U.S. Embassy in Baghdad, the killing of General Qassem Soleimani and the downing of a Ukranian jetliner have escalated tensions to the point of potential revolution.

Arizona State University School of Social Transformation Director Pardis Mahdavi has been working in and on Iran for the past two decades and brings a nuanced view of the conflict. She will talk about the escalation in Iran during a Friday presentation at ASU’s Tempe campus titled “Understanding Iran: A Conversation with Pardis Mahdavi.”

Michael Rohd, a professor at the Herberger Institute for Design and Arts will interview Mahdavi, who will then take questions from the audience.

Mahdavi's family lost everything in the Iranian revolution in the late 1970s. They faced displacement and discrimination in addition to the loss of home and country.

Mahdavi spoke to ASU Now about her upcoming presentation, her former life and Iran's future. Question: You said last July that Iran has been ripe for revolution for several years, but U.S. military action has always set this back. What does that mean?

Answer: Iran has one of the youngest populations in the world with 70% under the age of 35. At the same time, these young people are highly educated, and many are dissatisfied with the current regime. Over the past decade we have seen an increase in the numbers — and socioeconomic diversity — of people pouring into the streets to overtly protest the Islamists in power. From the Green movement of 2009 to the larger protests of 2017–18, and then the widespread protests at the end of last year, we are seeing more and more Iranian citizens actively showing their disgruntlement with the regime.

That said, the street politics in Iran have often been adversely affected by U.S.-Iran relations. When the U.S. promotes sanctions, that gives the regime more power to say that the fault lies with the “Great Satan,” and not with the regime. Remember, this is a government that came to power through an agenda of reversing “Westoxication.” The Islamists in power gained — and still maintain — their power through anti-Westernism. What happens when the “West” acts aggressively toward Iran is that this argument suddenly gains more weight, and, by extension, the regime gains more power.

Q: How would you describe the current level of tensions, both within Iran and between Iran and the U.S.?

A: Within Iran the simmer of discontentment with the regime is definitely up to a boiling roar. Especially when news of Iran’s involvement in the downing of Flight 752 came out, people were incensed and began calling on global support to hold the regime accountable. Iranians living in urban and rural areas publicly decry the regime for falling short on its promises. And what is distinctive about this wave is that it appears to be led by Iranians in counties where there is limited voting or votes are often cast for a moderate candidate. At the surface, the protests seem to once again (in a repeat of 2017) be about gas prices and unemployment. But at their core, these protests were loud and resounding calls for regime change.

Between the U.S. and Iran the heat seems to have turned to a simmer — but one of mutual distrust. Both sides seem to be standing in a face-off, waiting for the next move.

To me, one of the interesting questions is also to consider what is happening between Iran and Iraq and throughout the regime as a whole.

Q: How seismic an event was the killing of General Soleimani for Iran?

A: Enormous. It was also unexpected — and the way in which it transpired, in Iraq, also added several layers of complexity. It was an incredibly aggressive act of war and shook the entire region. Members of Iran’s Foreign Ministry — including Foreign Minister Javad Zarif — said that the provocation demanded a response. In the immediate aftermath the entire region and perhaps the whole world held their breath to see what the magnitude of the response would be. Iranians living in Iran looked two steps ahead. What would happen to them after their government responded and then the U.S. or its allies hit back with even more magnitude? Iranians in the U.S. were terrified of the crushing tide of Islamophobia that was flooding our shores. Iraq and Syria were watching to see what their response would be. The reverberations were felt across the globe.

On a personal note, it was a terrifying moment to be an Iranian American. I was worried for my family back in Iran as I choked back tears when I heard their worried voices on the other end of our Skype calls. When I looked at the fearful faces of my own children who read headlines of an impending war with Iran, I had to take deep steadying breaths as I convinced them that it was still safe for them to go to school here in Tempe, that their classmates would not bear them any ill will — I hoped. And I was frustrated at the monolithic portraiture of Iranians that was sweeping the U.S.

Q: The initial expectation of escalation after the killing and the bombing of bases in Iraq appears to have quieted down. Has it? And how do you view the coming months or even the next year or two?

A: It seems to have quieted the escalation between the U.S. and Iran. But the situation in Iran is far worse now than even a few months ago. Iranians pour into the streets to protest the regime. The government responds with increased crackdowns. In the weeks preceding the assassination of Soleimani, people had already started protesting escalating gas prices and the failing economy. When the assassination took place, Iranians on the ground were shocked.

Inside Iran, tensions are mounting as people are increasingly frustrated with the regime and are calling for transparency and government accountability.

In the coming months I fear that there will be a reescalation in the stand-off with Iran, particularly as the 2020 election draws closer. The U.S. doesn’t switch parties in the middle of the war — we know that from history. I worry about history repeating itself.

Q: You know Iran, on the ground, particularly in Tehran. Most Americans don’t. Describe for us what life is like in Tehran and your sense about the people?

A: Despite the monolithic portrayal of Iran as diametrically opposed to all things “Western,” many ordinary Iranians — young people and activists in particular — actually share important values with Americans. Iranians who have been taking to the streets for the past several years have been calling for things like human rights, equality, women’s rights and government accountability. And while the two governments have been at war, Iranian students at universities for example, have welcomed dialogue with their Western counterparts.

Q: Looking ahead, are you optimistic or pessimistic that the U.S. and Iran can find a place of equilibrium?

A: I have to be optimistic, otherwise it is too hard to live here as an Iranian American. I have to hope that people will start to look past the headlines and fake news and start to understand the nuance of U.S.-Iran relations. My hope is also that the U.S. will find a way to support the street politics in a way that is not intervention, violence, war or sanctions, but rather engagement with local folks.

Many activists in Iran believe that the Green Movement was a missed opportunity for members of the U.S. government to strongly support a resistance that could have led to positive change. It is true that the U.S. does not have a strong track record when it comes to engagement with Iran — consider the CIA-backed coup in 1953 that ousted democratically elected Prime Minister Mossadegh, or the uncritical support of the Shah’s Savak secret surveillance police. However, with the infectious hope that (President Obama's election) swept throughout the globe — Iranians felt that there was a possibility that American engagement could come in the form of support rather than deadly intervention, that Washington could back local activists in the form of calling for investigations into human rights violations or election transparency. While Iranian feminists and youth activists tried to engage their American counterparts, their success was limited as the U.S. preferred a more “hands off” approach that involved then President Barack Obama indicating his public support but not taking additional steps.

In the years before and after the Green Movement, feminist activists continued to publicly call for regime change, often by highlighting the regime’s unequal treatment of women. In 2006, they began the One Million Signatures campaign to collect signatures in support of reforms of laws that would allow women equal rights. Since 2000, they have demonstrated their resistance by sliding the mandatory headscarf further and further back — earning this movement the nickname “the millimeter revolution”. In 2014 a social media campaign with the hashtag #MyStealthyFreedom spread rapidly featuring images of Iranian women photographing themselves in public without their hijab. In 2018, public protests of mandatory veiling swept the nation with women standing publicly without headscarves in protest. Again, feminists called on a global solidarity. Again, the global community turned their/our backs.

The Sun Devil men's golf squad tied for second to host Pepperdine at the Southwestern Invitational on Tuesday in its first event of the spring season. ... The Sun Devil men's golf squad tied for second to host Pepperdine at the Southwestern Invitational on Tuesday in its first event of the spring season.