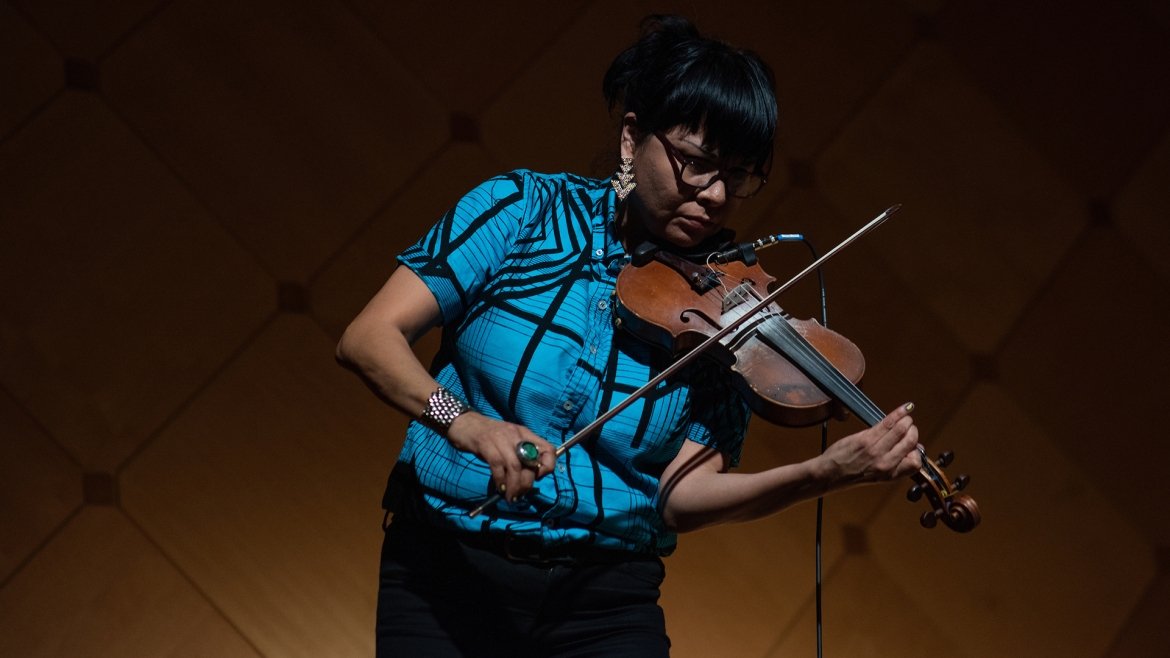 ASU launches Center for Imagination in the Borderlands

New center brainchild of MacArthur Fellow Natalie Diaz, who aims to reimagine what America’s borderlands can be

The university’s own wunderkind, MacArthur Fellow and renowned poet Natalie Diaz, served as master of ceremonies for an evening of readings, performance and discussion, all of which served to launch the Center for Imagination in the Borderlands, a brainchild of Diaz’s that she and her collaborators hope will spark inquiry, action and, ultimately, a reimagining of what America’s borderlands can be.

“I’ll ask that you consider the stories and energies of the lands we are on tonight,” Diaz said in her opening address to the audience, which had filled the hall to capacity. “What does it mean that we are here and some people are not?”

Diaz, who will serve as director of the center, thanked ASU President Michael Crow “for the energy to catalyze my own imagination,” as well as President’s Professor of indigenous education and justice Bryan Brayboy for his support.

“It’s not easy to be the body I am,” she said. “Queer, Native, Mexican, Latina, woman. It is lucky to have found ASU, that ASU found me, and that I am among these collaborators and provocateurs.” 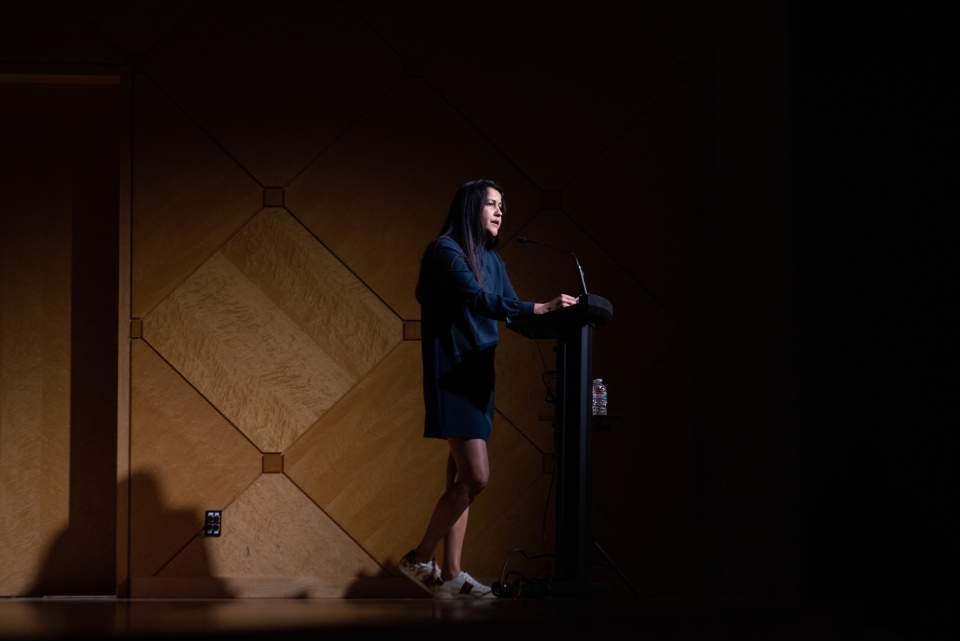 ASU Associate Professor of English and Director of the Center for Imagination in the Borderlands Natalie Diaz addresses the audience at the center's launch event Thursday. Photo by Meg Potter/ASU Now

An impressive roster of artists rounded out the bill at Thursday’s launch event, taking the stage in the following order:

• President and CEO of United States Artists Deana Haggag, who spoke with passion about the power of art — but also how powerless we are to face today’s challenges in America and across borders without it.

• Tohono O’odham Nation Poet and MacArthur Fellow Ofelia Zepeda, who read a selection of her poems, including “In the Midst of Songs,” a sonorous tribute to the songs of indigenous peoples and the land that inspired them.

• Award-winning poet and ASU Assistant Professor of English Solmaz Sharif, who also read a selection of her poems, including the searing “Drone,” about the stark realities of life and death in a war-torn country.

• MacArthur Fellow and author of “Lost Children Archive” Valeria Luiselli and White Mountain Apache musician and National Artists Fellow Laura Ortman, who took the stage together in an impromptu collaborative performance in which Luiselli read excerpts of an untitled work in progress about the history of violence against women and the land in the U.S.-Mexico borderlands, intermittently punctuated and finally concluded by Ortman’s unorthodox instrumentals. 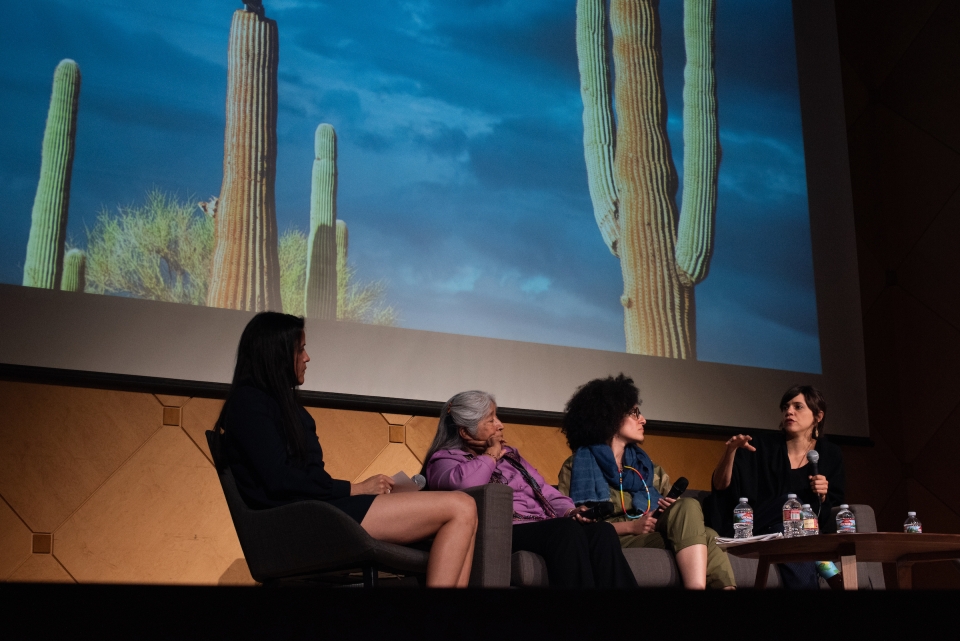 A brief interlude between Sharif and the joint performance of Luiselli and Ortman included remarks from ASU Dean of Humanities Jeffrey Cohen, who acknowledged that there is a lot of work to be done in the humanities.

“Too often in the past, humanities have functioned as a kind of country club, with all the exclusivity that entails,” Cohen said, “letting some people know they might be ‘more comfortable’ somewhere else. We need to abandon that model.”

The interlude also included a discussion between Diaz, Zepeda, Haggag and Luiselli on what imagination means — and what lands, stories and people inhabit it — in the borderlands.

“We tend to focus on what’s terrible about imagination when thinking of borderlands,” Diaz said. “Imagination can be a very terrible place … those fences ... it’s an incredible waste of the imagination.”

Her discussion with Zepeda, Haggag and Luiselli explored what might be possible if we were to imagine differently.

“For centuries, we have all lived in very hierarchical institutions, all of them imagined by men,” Luiselli said. “Churches, universities … congresses. And there’s a very vertical relationship of power in those imagined structures, and I think that the way I am trying to re-understand my work and everyday life is precisely against that idea … and in finding more fluid and horizontal ways of reimagining how we constellate, how we discuss, how we think in communities and, therefore, how we produce whatever it is that we produce.”

The launch event itself seemed a meta confirmation of Luiselli’s sentiments.

“There is a way of Mojave thinking where we say, ‘It’s been dreamed,’” Diaz said. “It doesn’t mean you fell asleep and a vision came to you. It means there are things set in motion that we have yet to arrive at. … This idea of collaboration is one of the ways we’re trying to arrive there.”

Other ways the center plans to work toward arriving at its goals remain to be seen. However, Diaz feels its location makes it uniquely suited to doing so.

“Arizona is a crucible for the many questions we find ourselves asking locally, nationally and throughout the world,” she said. “Arizona and ASU are unique spaces with incredible capacities to broaden these conversations because Arizona is a place of tension that necessitates the kind of thought capable of influencing and catalyzing the futures we believe we deserve. At ASU in particular, we understand that our future is now.”

Top photo: White Mountain Apache musician and National Artists Fellow Laura Ortman performs in the Katzin Concert Hall on ASU's Tempe campus during the launch of the Center for Imagination in the Borderlands on Thursday. Photo by Meg Potter/ASU Now

The unbearable lightness of bee-ing

Last week the United Nations biodiversity chief warned that humans risk living in an “empty world” with “catastrophic” consequences for society if world leaders cannot reach an agreement this year to stop the mass extinction of wildlife and destruction of life-supporting ecosystems.Rhinos. Giraffes. Tigers. Birds (all of them). Insects. All of them are facing extinction. While the average ... 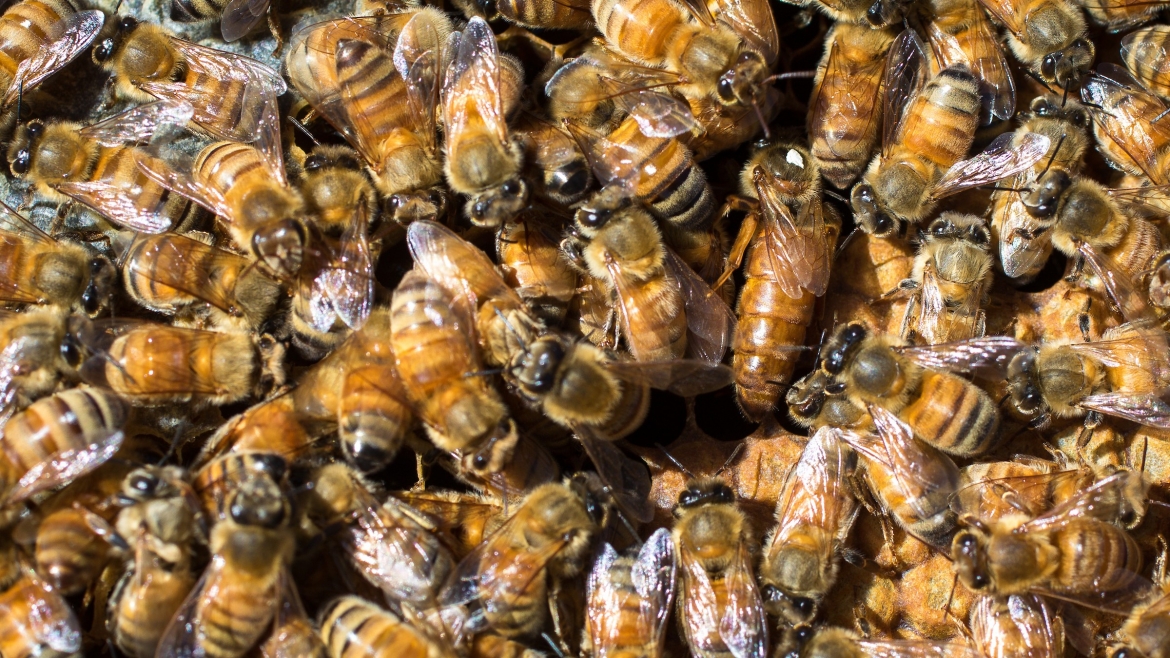 The unbearable lightness of bee-ing

Polytechnic campus
Magazine founder shares what the average person can do to help save bees.
January 24, 2020

Last week the United Nations biodiversity chief warned that humans risk living in an “empty world” with “catastrophic” consequences for society if world leaders cannot reach an agreement this year to stop the mass extinction of wildlife and destruction of life-supporting ecosystems.

Rhinos. Giraffes. Tigers. Birds (all of them). Insects. All of them are facing extinction. While the average person may not be able to do much about giraffes or tigers, you can help bees.

And there’s a beautiful new magazine that can help you do that. Created by an Arizona State University biologist, 2 Million Blossoms is a new quarterly launching this month. With spectacular photography, writing and design, this is the Vanity Fair of pollinator publications.

Even if you don’t keep bees but simply like them, there are features on what you can do to help them. Also included are features on interesting pollinators you may never have heard of and initiatives going on in cities and countries around the world — including everything from rooftop beekeeping to creating more pollinator-friendly urban environments. Cities don’t have much for bees to forage on, and a lot of the solitary bees fly less than 500 yards to forage. If you plant the right things on flat spots that are unused (such as the top of bus stops), they become a nice food source for bees in the spring, summer and fall.

The writing is as spectacular as the visual presentation. The inaugural issue features a story by natural history writer Craig Childs about using bees to find water in one of the West’s harshest deserts. Other stories include a humorous and thoughtful piece about the ethics of beekeeping and how to plant the best garden for pollinators.

Founder Kirsten Traynor earned her PhD from ASU in 2014 in honey bee biology. The former editor of the monthly magazine American Bee Journal and the quarterly magazine Bee World, Traynor recently returned to ASU to work as a research associate in the Global Biosocial Complexity Initiative.

“It’s aimed at both beekeepers who do a lot of outreach, who are at farmers markets and who are engaging customers so they have information to share, and then it’s for a lot of native bee enthusiasts and other pollinator enthusiasts,” Traynor said. “When we say save the bees, most people think of the charismatic honey bee, but there are actually 20,000 species worldwide of bees. It’s trying to illustrate that it’s those other bees that are really in trouble and can use our help in small changes that we do in our backyards and balconies (that) can really add up to (a) habitat for them.”

ASU Now talked with Traynor about the state of bees worldwide, what you can do to help and what she hopes to accomplish with the magazine. 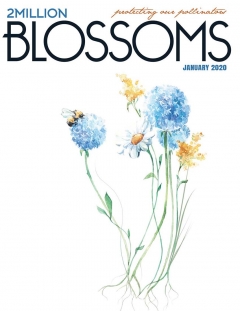 Question: Why are bees worldwide in trouble?

Answer: It’s a wide variety of interacting factors. It seems we’re still trying to figure that out. There was a recent paper a couple of years back now out of the nature preserves in Europe where they’re just doing insect biosampling. They found we lost 75 to 80% of our insect biomass in the last 30 years. Some scientists call this the windshield effect. When you used to do cross-country drives, you’d have to wash your windshield every time you got gas. Now you very rarely end up with splattered bugs. There’s a disappearance of insects, and that probably has ripple effects, since they’re the foundation of the food chain. We’re finding other organisms are declining rapidly. We’ve lost a lot of birds in the last 30 years.

Q: What are some of those contributing factors?

A: It’s factors like changing climate. Oftentimes the plants and the weather become out of sync with one another, so pollinators are emerging — they can be specialists on specific plants, and those plants are not blooming at the time they’re emerging. A lot more habitat has been destroyed or turned into developments or paved over. Then of course the use of pesticides and a dwindling of food resources: nectar and pollen for pollinators.

Q: Can the average person improve the situation, say by planting flowers or something else?

A: One of the best things we can is become a little more weed tolerant and also change our practices. For instance, we grow more lawn in the United States than we do agricultural crops. They’ve done some really nice studies (that have found) where instead of mowing your lawn every week — which most people don’t like to do anyway — a lot more of the clovers and legumes will actually bloom in your lawn. Instead of being a food desert, it will provide nectar and pollen. It’s changes like this we can implement.

Q: How about here in the desert, where we xeriscape?

A: There’s a lot of very nectar-rich plants you can put in xeriscaping. Bees do phenomenally well in Arizona. ... The desert is extremely well-adapted to providing nectar and pollen. You find a lot of bee biodiversity in the desert, much more so than other locations.

Q: What do you hope to accomplish with the magazine?

A: There’s a growing divide between beekeepers and native bee enthusiasts, where people consider honey bees pollen pigs. They’re not native to the United States. Part of what I’m trying to do with this magazine is build a place for dialogue and discussion because a lot of times we have similar goals in improving habitat. If we just learn to respect one another and work together, I think it can be a lot more beneficial. We’re never going to get rid of honey bees. We need honey bees for the large, vast monoculture crops we grow in the United States. We’re never going to get rid of pesticides, so how do we learn to work with pesticides that are less detrimental to pollinator health, and what are potential ways forward?

The publication can be found online at 2millionblossoms.com. Both digital and print subscriptions are available.