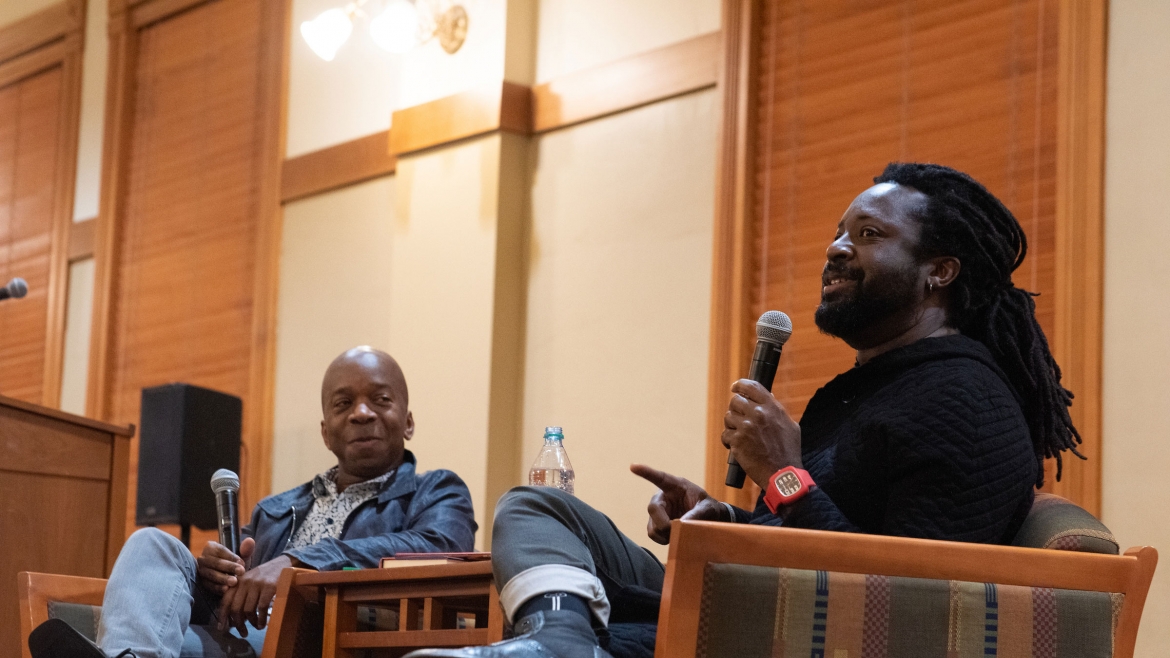 Celebrated author speaks on reclaiming the fantasy novel at ASU

Marlon James is a writer for a few reasons: It brings him joy. It allows him to address cultural erasure. It quiets the characters in his head who won’t let him sleep until he brings them to life.

But mostly he writes because he doesn’t know what else he’d do with himself.

“This is my vocation and my job,” James told the crowd packed into Old Main’s Carson Ballroom on Arizona State University’s Tempe campus Friday night. “And what I do in the world, what I see in the world — I want to make sense of it. … But also, there’s a lot of (stuff) I need to get off my chest.”

The celebrated author, whose New York Times best-selling novel “Black Leopard, Red Wolf” was recently optioned for the big screen by “Black Panther” star Michael B. Jordan, was at ASU in advance of the Martin Luther King Jr. holiday to participate in a dialogue called “Reclaiming the Fantasy Novel” as part of the Arizona Center for Medieval and Renaissance Studies’ Race Before Race symposium.

The annual symposium brings together medieval and early modern race scholars, students and community members for two days of presentations and discussions that consider the study of race through the framework of classical texts and inspire cross-temporal dialogues about race.

Center Director Ayanna Thompson introduced James on Friday, saying that while questions of appropriation, adaptation and authority of narratives swirled in attendees’ minds after last year’s symposium, “a creative genius plunged headlong into the same waters but through a work of stunning complexity and beauty: the 2019 novel ‘Black Leopard, Red Wolf.’”

Who better to discuss “power, history, knowledge and ownership than Marlon James?” Thompson asked the audience, and was met with widespread applause.

A native of Jamaica, James is the author of four novels. His novel “A Brief History of Seven Killings” won him the 2015 Man Booker Prize for Fiction, making him the first Jamaican author to take home the U.K.’s most prestigious literary award. In the novel, James explores his country’s history through the perspectives of multiple narrators and genres to shed light on the untold history of Jamaica in the 1970s, touching on the assassination attempt on reggae musician Bob Marley, as well as the country’s struggles during the Cold War.

He cites influences as diverse as Greek tragedy, William Faulkner, Shakespeare and Batman.

At the event, James chatted with Michael Bennett, an associate research professor with appointments at ASU’s School for the Future of Innovation in Society and Center for Science and the Imagination, about everything from why he writes, to how he writes, to the role of music and violence in his work, to what it means to be a queer person of color writing fantasy.

It all started with some great advice from Toni Morrison: Write the novel you want to read.

James has always been a lover of the fantasy genre, calling himself a “fantasy geek,” but said he rarely — if ever — saw himself in the stories he read.

“Reading these novels, as person of color, you double read them,” he said. “Part of it is feeling (like you’re) not part of this world. … So I’m inspired by responding to erasure.”

Several attendees submitted questions for James ahead of time, many of which asked about his writing process. After addressing what inspires him, he talked about the importance of creating a routine and a defined space to work, even if it's just at your local Starbucks.

Though James is a huge music fan and music plays a big role in his work, he said he doesn’t listen to it while he writes, because it would be too distracting. Rather, he listens to it on the way to his writing space.

“One of best things you can do for yourself as a creative person is will this kind of synesthesia,” he said. “A lot of fearlessness I get inspired by is from listening to jazz. … There’s something about listening, seeing, hearing, reading artists pushing the boundaries of their own time.”

He’s also a fan of reggae (“It’s music that deals with very complicated, political situations,” he said), Prince and even some metal.

“The musician is a historian,” James said of his respect for practitioners of the art form and the reason it looms so large over his own work. “The person who keeps truth from generation to generation.”

The auditory quality of words is something he said he’s constantly considering as he writes, wanting to be sure what he has written sounds just as good spoken aloud as it looks on the page. He stops short of reading his entire novel out loud, though, joking that it would be “very painful.”

When Bennett brought up the topic of violence, James replied that he doesn’t actually think there is a lot of violence in his books.

“There’s not a lot of it, but it resonates,” he said. “If it doesn’t resonate, then you’re numb.”

On the subject of mythology and its influence on the fantasy genre, James pointed out that what J.R.R. Tolkien and C.S. Lewis had that many writers of Afrofuturism don’t is an abundant and well-documented canon.

“One thing I bring up about Tolkien and C.S. Lewis and others, is what it must feel like to take your mythologies for granted,” James said. “The average British person doesn’t realize how much they’re still clinging to Arthur and Camelot.

“But for me, trying to write these stories and not having that mythology … Some survived but a lot didn’t.”

Bennett commented that it must be fascinating to go through the experience of creating your own mythologies and then watching them become a new resource individuals can use to “frame events in an increasingly chaotic world.”

At that, Bennett parlayed the conversation toward the buzz surrounding a film adaptation of “Black Leopard, Red Wolf,” for which Barry Jenkins, who wrote the script for “Moonlight,” has signed on.

“That makes me very happy because I’m a big fan of ‘Moonlight,’” James said. “It’s also a sign that he’ll keep the queer elements in.”

He’s not worried about Jenkins adding to the story, though:

“I’m not interested in something that follows the novel to a T. Bring something else to it!”

Tamale season is that time just before Christmas when friends and relatives come together to partake in the time-honored tradition of soaking corn husks, cooking fillings, spreading masa and rolling it all up into hundreds of delicious little meat pockets.Vanessa Fonseca-Chávez, assistant professor at ASU’s College of Integrative Sciences and Arts, kicked off last week's "Digital Storytelling... 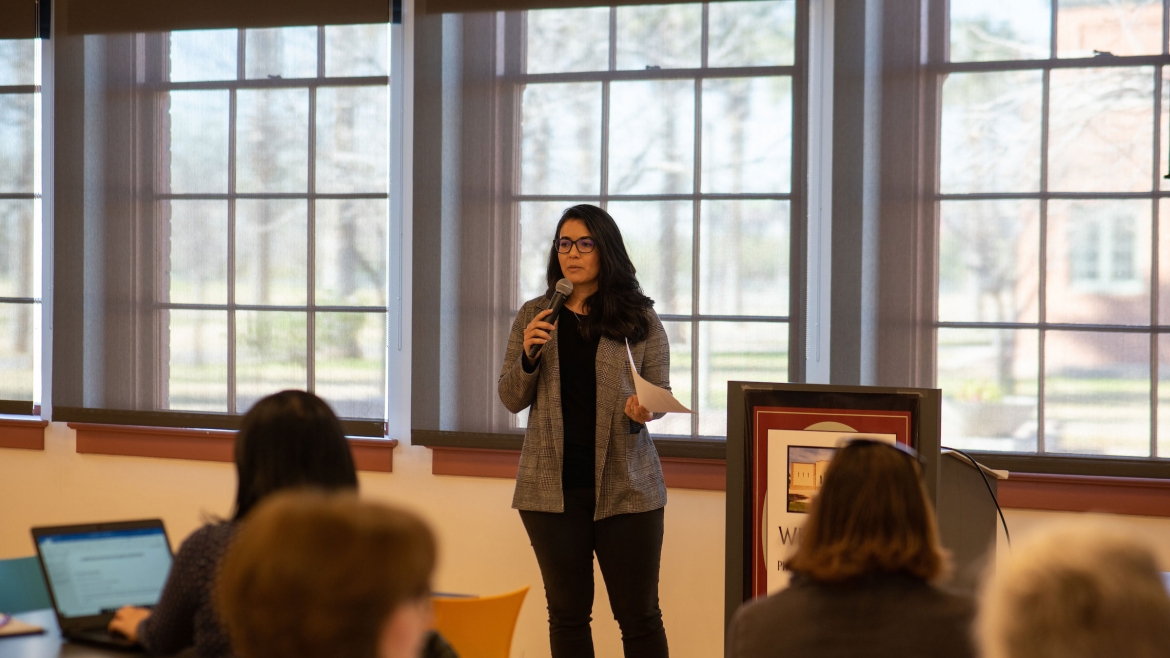 Tamale season is that time just before Christmas when friends and relatives come together to partake in the time-honored tradition of soaking corn husks, cooking fillings, spreading masa and rolling it all up into hundreds of delicious little meat pockets.

One year, horrified at her mother’s suggestion that they buy tamales instead of making them, Fonseca-Chávez determined to lead the endeavor herself. Because aside from the mouthwatering food that results, making tamales is really about connecting as a family.

“The point is it takes our entire family for this to happen,” she said. “So regardless of how much work it is, it’s worth it.”

Food can bring not just families but communities together through shared values and experiences. And in the digital age, it’s easier than ever before to connect through food.

That was the goal of Saturday’s event, in which Fonseca-Chávez led participants through a workshop on how to write about, share and add to their food stories through digital engagement on websites like Facebook, Instagram and Bon Appetit.

College of Integrative Sciences and Arts Associate Professor of communication and culture Manuel Aviles-Santiago, who helped organize the event, referred to the increasing phenomenon of the “digital foodprint” as inspiration for the day’s workshop.

“By ‘digital foodprint’ I refer to the digital data we produce — intentionally and unintentionally — about food on social media (i.e. restaurant reviews, status updates, sharing images, recipes),” he said. “Our goal is to help understand the impact of these digital food stories in the configuration of community and sense of belonging.” 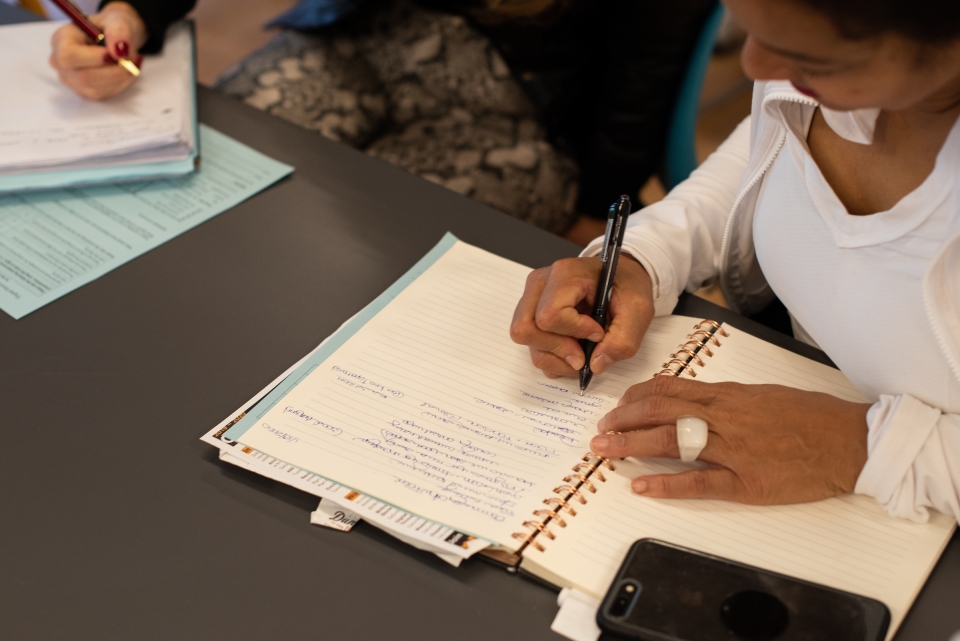 Participants of Saturday's Words on Wheels "Digital Storytelling" event wrote down family recipes then shared them with the group to begin the process of creating a story they can share digitally with their communities. Photo by Meg Potter/ASU Now

The workshop was hosted as part of the Center for Race and Democracy's Words on Wheels initiative, a mobile writing center geared toward helping people develop personal, professional and civic writing and literacy skills, with a special focus on serving members of the greater Phoenix community that have historically been disenfranchised due to race, culture, poverty, individual trauma and other social injustices.

Attendees at Saturday’s event ranged from high schoolers to retirees. After Fonseca-Chávez told her family tamale story, they were encouraged to tell their own food stories in small groups, then share with the whole crowd.

College of Health Solutions staffer Shanan Bouchard attended the workshop hoping to learn more about how to tell family stories through food, since it’s a universal experience. She relayed how her grandparents’ green tomato relish recipe originated with the need to use whatever resources were available, even if they were not yet ripe.

“My grandparents were very poor, so if tomatoes were green in the garden and they didn’t have anything else to cook with, you learned to cook with those,” she said. “They didn’t let anything go to waste.”

“We always ate fry bread with it, and we would argue over who had the best fry bread,” she said. “It was just really fun hanging out with my family.”

School of Transborder Studies Professor Seline Szkupinski Quiroga was on hand to help facilitate. As one of the founding members of Cultural Engagements in Nutrition, Arts and Sciences, and as the program director for ASU’s College Assistance Migrant Program (CAMP), she is very much aware of the role food plays in shaping identity and fostering community.

“Through CAMP, I’ve learned a lot about food production in Arizona,” she said. “Food has been a thread throughout all of my work and research, so it’s wonderful to be here today.”

As the workshop came to a close, College of Integrative Sciences and Arts narrative studies graduate student Delena Humble shared one more story about how her grandmother had used her iPhone to record a three-hour video of her making tamales (since no one else in her family could remember the recipe) and was able to share it with them despite living hours away in Mexico.

“Seeing her use technology to pass on this family recipe was awesome,” Humble said. “Now I have it saved on my laptop, and it’s just an interesting experience of how technology can speed up that family process of going from oral history to actually seeing the process happen.”

Top photo: Assistant Professor Vanessa Fonseca-Chávez tells her family's food story at a Words on Wheels event hosted by the Center for the Study of Race and Democracy, "Digital Storytelling: Imagining Community Through Food Stories." Photo by Meg Potter/ASU Now