A stretch of the imagination is needed when picturing Jane Austen.

That’s because there are few known reliable portraits of the famed novelist, whose likeness and celebrity are the subject of a recent discovery made by Devoney Looser, ASU Foundation Professor of English, author of “The Making of Jane Austen” and editor of "The Daily Jane Austen." 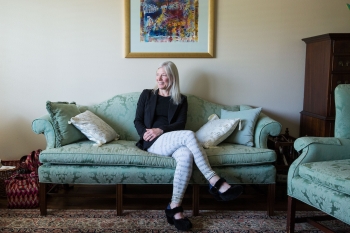 Looser has unearthed the earliest known piece of Jane Austen fan fiction, a previously unrecorded and virtually unknown pen portrait of Austen from an 1823 issue of The Lady’s Magazine.

The discovery was made possible by a series of advanced keyword searches via a trial subscription of Eighteenth Century Journals provided by the ASU Library.

Looser describes the unknown pen portrait as something of a “lightning bolt,” undoing prior knowledge of Austen’s fame and confirming that the author had a fan following nearly a century earlier than previously thought.

“We used to believe that Austen was obscure in the 1820s, in the early years after she died in 1817,” said Looser, who is a Guggenheim Fellow and National Endowment for the Humanities Public Scholar. “This alone proves that that commonly held belief is a mistaken one. It tells us that people cared about what she looked like and that she was gaining fame in the 1820s.”

The fact that Austen portraits are so scarce and notoriously controversial makes Looser’s discovery all the more significant.

“Surviving descriptions of Austen are rare,” writes Looser in a recent issue of the Times Literary Supplement (TLS). “Five months after her death in 1817, her brother Henry Austen famously provided the first. It was an homage to Jane in a pen portrait. … Henry’s description of his sister aimed to inspire admiration, provoke sorrow and whip up author worship. His Jane exceeded the middle height and had a fine complexion, a modest cheek, and a sweet voice. He called her nearly faultless, saying she never uttered a hasty, silly or severe expression.”

Produced just five years after Austen’s death, the newly discovered pen portrait, a “Letter to the Editor of The Lady’s Magazine,” takes the form of a humorous mock letter to the magazine's editor, aptly dated April 1, and offers a vision of Austen alternative to Henry’s cleaned-up portrait.

The fictional letter is written under the pseudonym “Jane Fisher,” who describes herself as an aspiring writer wanting to know more about Austen, her appearance and writing habits.

In the letter, Fisher describes a visit from Austen’s ghost and learns that Austen used to write both during the day and late at night. She goes on to describe her appearance: “At first, I confess, I was somewhat disappointed in the turn of face and features, which had more of plump roundness, and less of expression,” the letter reads.

Looser has evidence to believe that the fictional voice of Fisher could possibly belong to the novelist Mary Russell Mitford, who was well known in her day, a frequent contributor to The Lady’s Magazine, and had several connections to Austen. (Mitford’s mother and friend both knew the Austen family personally.)

“She possibly had eye-witness accounts of what Austen was like,” Looser said. “It’s a vision of her unlike any other we now have.”

Subscription databases like Eighteenth Century Journals are changing what kinds of discoveries are possible for those students and scholars fortunate enough to have access to them.

Bringing together rare journals that were printed between 1685 and 1835, a period known as the long 18th century, Eighteenth Century Journals — to which the ASU Library now subscribes — enabled Looser to access The Lady’s Magazine, of which few print copies exist.

“There are several copies of the magazine across the world on microfilm,” Looser said, “but the way to find new things long hidden in plain sight now is through keyword searches in full-text databases, which is how I found this amazing piece of fiction on Jane Austen. It describes her nose of genius, her blue dress, lace cap and pink ribbons, and her reputation as a literary role model."

When Looser's piece for the TLS was in proof, she learned that Jennie Batchelor, a professor of 18th-century studies at the University of Kent and the preeminent scholar of The Lady's Magazine, has also been working on this pen portrait and is preparing a book chapter on it for publication.

Looser anticipates future work on the 1823 mock letter and believes other discoveries like it are yet to come.

“These databases are crucially important to scholars learning new things about the past. They are often the only way to get access to centuries-old materials,” Looser said. “Many people have the mistaken idea that it's all free on Google books at this point. Not so. We need the resources and support of our university libraries."

Lorrie McAllister, associate university librarian for collections and strategy at the ASU Library, added: "Our information environment is truly deep and rich. The simple search box is alluring, yet there is so much more to explore and discover past the first page of search results — in databases, journals, books and a whole multitude of formats. Digging deeper into these resources reaps rewards in scholarship, learning and sometimes just being inspired!"

• Letter to the Editor of The Lady’s Magazine

Editor’s note: This is part of a series of profiles for fall 2019 commencement.Physics majors cultivate a habit of lifelong learning and a creative, determined approach to problem-solving, in addition to a foundation of knowledge and understanding.The College of Liberal Arts and Sciences’ Dean’s Medalist Dakota King is looking forward to building on this foundation to help improve health a...

Physics majors cultivate a habit of lifelong learning and a creative, determined approach to problem-solving, in addition to a foundation of knowledge and understanding. 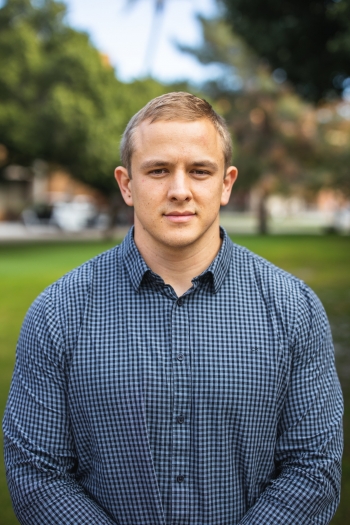 Dakota King is graduating from the ASU Department of Physics with a Bachelor of Science in physics. Download Full Image

The College of Liberal Arts and Sciences’ Dean’s Medalist Dakota King is looking forward to building on this foundation to help improve health and lifestyle through research and medicine.

King graduated last month with a Bachelor of Science in physics, and also completed a pre-med program. We sat down with the department’s most recent alumni to ask him a little about how he got started, where he’s headed next, and the lessons he would pass on to current and future students.

Question: What accomplishment are you most proud of from your undergraduate studies?

Q: What was your "aha” moment when you realized you wanted to study physics?

A: I’ve always been curious about the world around me, but after watching the show "Cosmos: A Spacetime Odyssey," I decided to read several popular physics books, which ultimately influenced me to major in physics.

Q: What is something you learned while at ASU — in the classroom or otherwise — that surprised you, or that changed your perspective?

A: My study of quantum physics. When you really stop and think about how the world works at its smallest scales, it gives you a new perspective on the world around you and reveals how interesting the universe is. I think it is amazing that humans have been able to investigate nature at this deep of a level; it will be interesting to see what we learn in the future.

A: ASU is a successful and expanding research university. It provides ample research opportunities and has a faculty that is more than willing to work with students of all levels. I feel that ASU is a place where anything is possible — you truly can learn and grow in any field that you wish. Luckily, I am an Arizona native, so the decision to come to ASU was easy.

A: It would have to be the professor that I worked with for over two years: Professor David Meltzer. Dr. Meltzer is a theoretical physicist who decided to dedicate his research to physics education; he is extremely passionate about his work and is always more than happy to provide guidance when it comes to physics — or anything. He taught me how to present research, gave me advice on going to graduate school, and reminded me to take my time exploring many areas of physics so that I may find an area I am most passionate about. These are just a few examples; I feel very fortunate to have had Dr. Meltzer as a mentor.

A: I think one of the most important pieces of advice is that you must believe in yourself. Sometimes your courseload will feel overwhelmingly difficult, but you must remind yourself that you can learn anything if you want it bad enough and work hard enough. Through this hard work, you will learn how to learn more efficiently, and your road will become a bit easier. And for the physics student specifically: Solve and master as many physics problems as you physically can – I feel this is the best way to learn the theory.

A: In general, PSF. It is where many of my classes were held. Classmates and I would always find an empty room or go to the Physics’ Student Success Center to study.

A: In addition to being a physics major, I have completed the pre-medical curriculum. Becoming a doctor is something that has always interested me – I love the thought of helping people who are in pain or battling disease. I also love physics and the thought of being a physicist. The nice thing about this is that physics has many applications in medicine, including imaging, radiation and drug design, to name a few. So, my plan is to become a physician-scientist. I am going to spend the upcoming year applying to MD-PhD programs with a PhD in physics or biophysics. It’s about an eight-year program and a long haul, but I want to be in a position where I can apply my research directly to helping patients. This is my dream career.

A: According to the World Health Organization, noncommunicable diseases are known to be the leading cause of death in the world. These are diseases that are nontransmissible directly from person to person; examples include heart disease, cancer and diabetes. Interestingly, many of the factors that drive these diseases are controllable. Factors like physical inactivity, tobacco use and unhealthy diets are all factors that we may be able to influence through education and policy. Therefore, if someone gave me $40 million, I would put it towards educating higher risk populations so that they may have a better understanding of how their lifestyle plays an important role in their health. This would hopefully increase the lifespan and well-being of individuals that decided to act based on the knowledge provided.