If you jump out of bed too quickly, you might feel a bit light-headed.

That’s because when you’re lying down, gravity causes your blood to pool in the lower parts of your body rather than in your brain. Fortunately, when you stand up, within a fraction of a second, your heart begins beating faster, moving the blood to your brain and allowing you to maintain your balance. 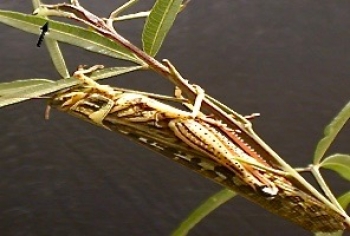 ASU researchers and their colleagues have discovered that grasshoppers, like this Schistocerca americana, adjust their cardiovascular and respiratory activity in response to gravity. Photo by Jon Harrison Download Full Image

The opposite happens when you’re standing on your head. Gravity causes the blood to rush to your brain, so your heart beats more slowly and the blood vessels leading to your brain constrict to prevent too much blood from building up there.

But insects don’t have closed circulatory systems with vessels that can restrict fluid flow to certain parts of the body. So how do they control the effects of gravity when they need to climb a tree or hang upside down on a branch waiting for prey?

Arizona State University School of Life Sciences Professor Jon Harrison, along with Professor Jake Socha with Virginia Tech’s College of Engineering, have published the first study that demonstrates how insects adjust their cardiovascular and respiratory activity in response to gravity. The findings appear today in Proceedings of the National Academy of Sciences.

“Interestingly, this has never been looked at in invertebrates,” Harrison said. “It’s something I’ve always been interested in because the blood is not in vessels. It’s an open circulatory system so the typical biologist would probably say, well the blood must just be sloshing around in there, but we actually don’t know much about what’s going on with blood circulation in insects.”

But thanks to this study, he’s now beginning to have an idea. Harrison and his colleagues took X-ray images of live insects and discovered that when grasshoppers were in a heads-up position, their heads were filled with open-air sacs and very little fluid (known as hemolymph or invertebrate blood). In their abdomens, it was the opposite: compressed air sacs and lots of fluid.

However, when grasshoppers have their heads down, their heads are filled with fluid and compressed air sacs while their abdomens have very little fluid and a lot of open-air sacs.

To learn more, they injected a radioactive tracer to track the hemolymph through the body and found that it was reacting to gravity. This indicates that gravity causes blood to flow downward in grasshoppers just like in humans.

And, interestingly, grasshoppers could substantially combat the effects of gravity on blood flow when awake but not when anesthetized. Thus, similar to vertebrates, grasshoppers have mechanisms to adjust to gravitational effects on their blood. So it’s not just a pool of fluid sloshing around. But what are the mechanisms? Harrison and his colleagues are starting to figure that out. 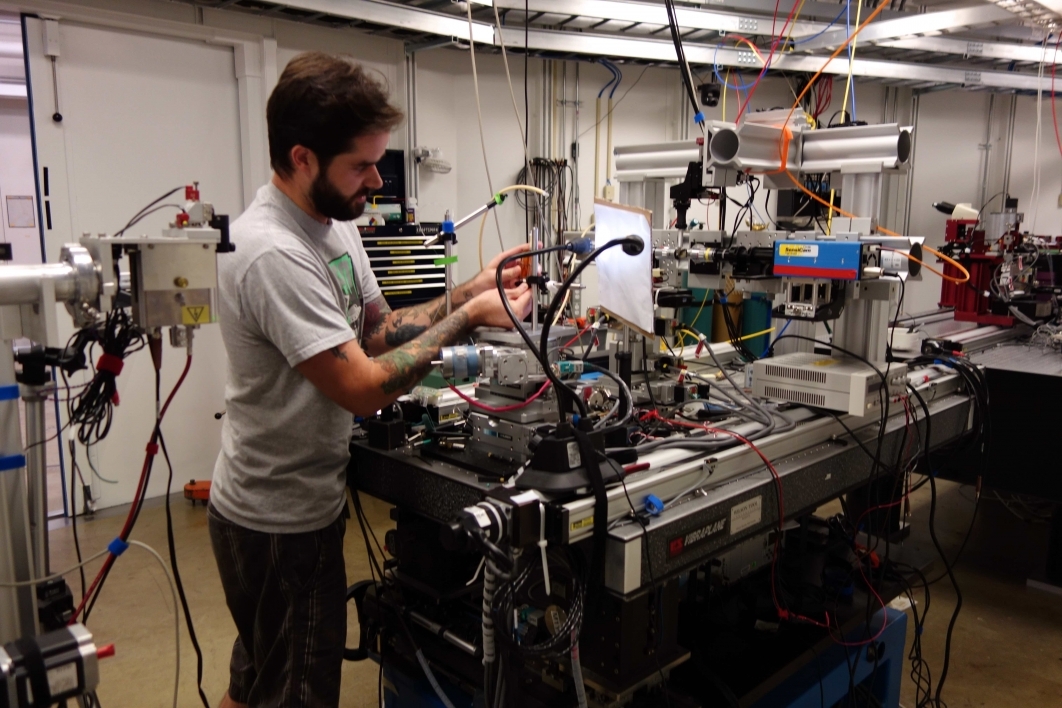 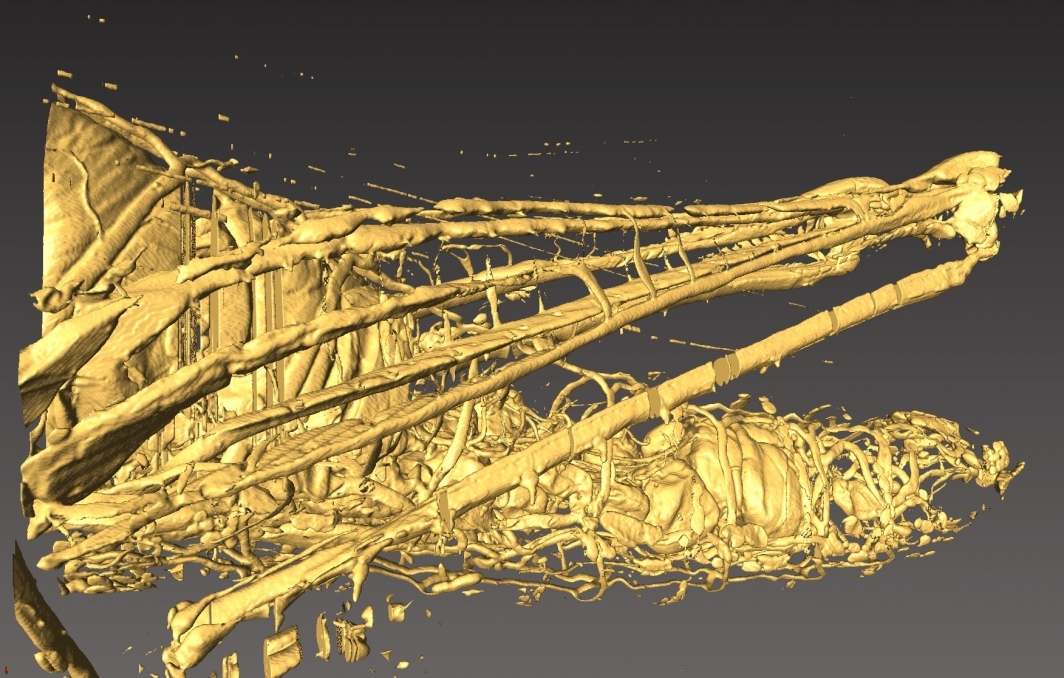 3D microtomographic image of grasshopper in a head-down position. The inflated air sacs in the abdomen are visible. The tomography was performed at Virginia Tech. 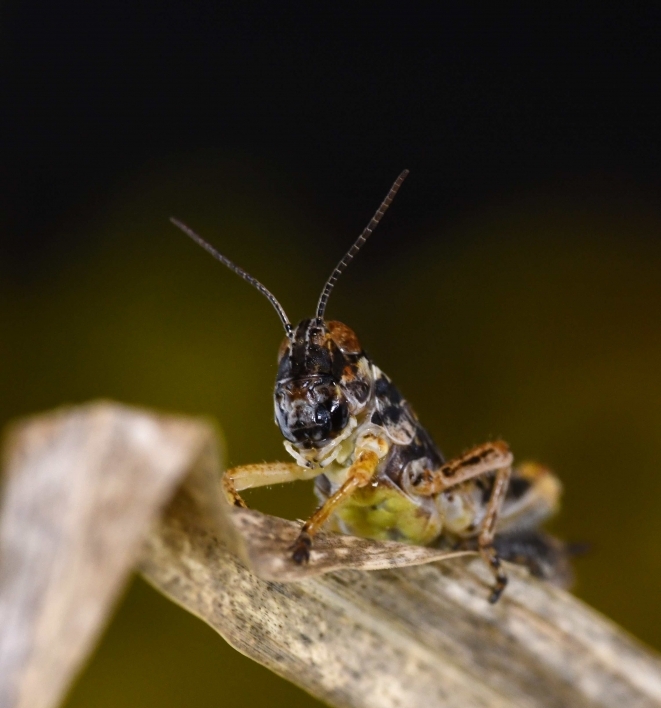 Melanoplus sanguinipes, a spur-throated grasshopper. When grasshoppers change their orientation, they have to respond to gravity just like humans. And, they have many of the same physiological responses. 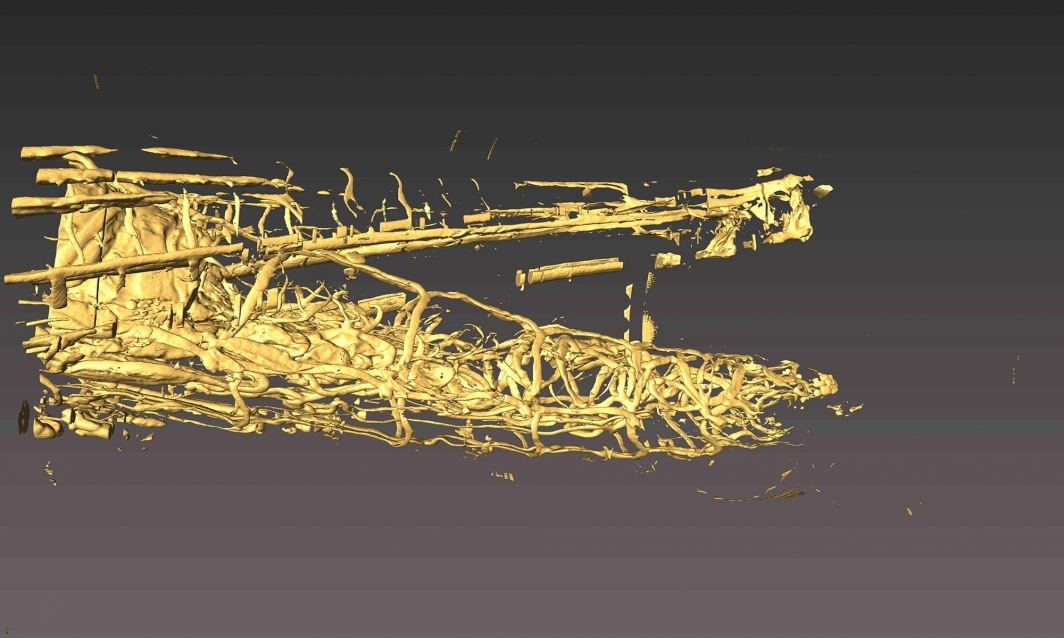 3D microtomographic image of grasshopper in a head-up position. This image shows that the tracheal tubes remain, but the air sacs are completely compressed. The tomography was performed at Virginia Tech.

At ASU, undergraduate and postdoctoral researchers in Harrison’s lab discovered that both heart and respiratory rates respond to body orientation and gravity. The grasshoppers that had their heads down (similar to a human standing on his or her head) had decreased heart rates to reduce fluid pooling in the brain. However, their ventilation rate increased. Harrison said they think this is because air sacs are being compressed around the brain so it’s struggling to get enough oxygen.

“So, grasshoppers have at least three ways to compensate for gravity; variation in heart rate, breathing rate and functional valving. And I’m sure there’s other stuff we don’t know about,” Harrison said.

As for other aspects of their physiology, insect bodies are capable of sophisticated responses to their active lifestyles.

“If you watch grasshoppers, they’re all over the place. They’re head up, head down, sideways,” Harrison said. “They’re very flexible in their body orientation, as are most insects. And now we know that when they change their orientation they have to respond to gravity just like humans, and they even show many of the same physiological responses. This is a dramatic example showing how similar animals are physiologically, despite how different they may appear.”