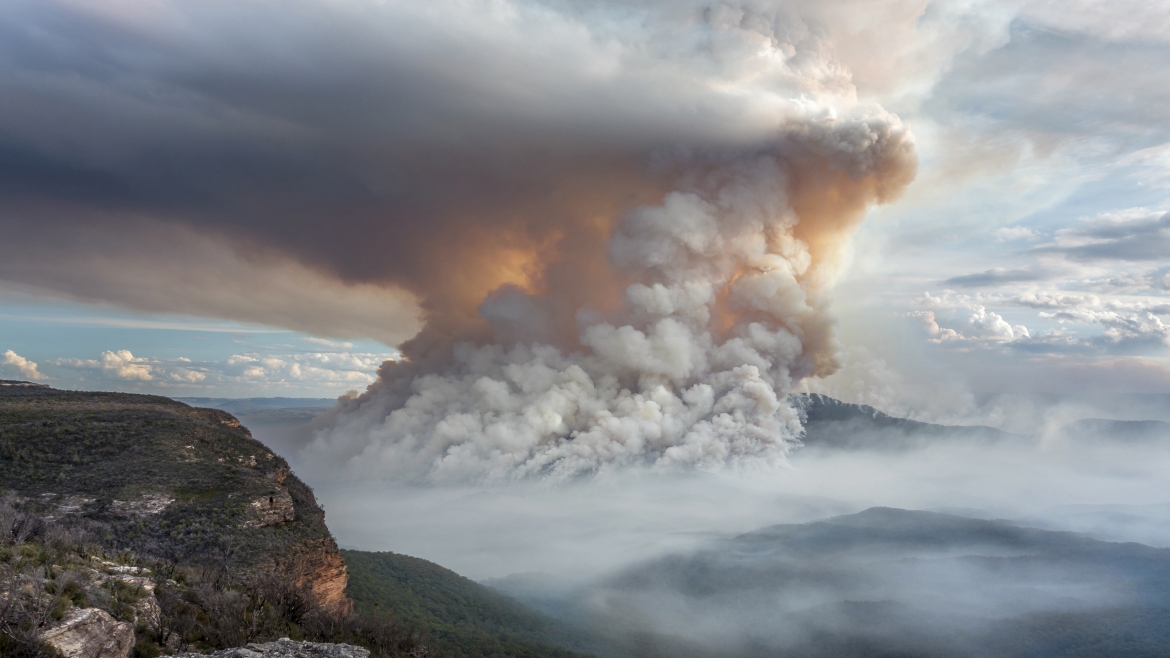 Extreme climate events are severely affecting communities in the U.S. and around the world. The examples are plenty. Australia is currently burning on a scale never seen before — 14.5 million acres scorched, half a billion animals killed and hundreds of thousands of people displaced. Hundreds of fires are still burning out of control.

California has seen an increase in deadly wildfires such as the Camp Fire in 2018, which became one of the world’s most expensive natural disasters and California’s most destructive — killing 88 people and destroying nearly 18,000 structures.

Flooding on both U.S. coasts and inland has grown due to extreme weather events and sea-level rise. Deadly hurricanes including Harvey, Maria and Sandy have caused irreparable damage to the communities they encountered.

“The overall challenge is that cities, in particular, are experiencing and will experience an increase in the frequency and magnitude of extreme events,” said Arizona State University Regents Professor Nancy Grimm. “So, fires, heat waves, flooding, coastal flooding, droughts and so forth — most of these are weather-related events, and whether or not you can attribute any single one of them to climate change, we’re going to see more of them and they are going to be more severe.”

This presents huge challenges for cities and the people who live there because many urban communities exist along coastal areas and rivers or in drylands. Infrastructure such as powerlines, water supplies and roads are concentrated in urban areas, making them even more vulnerable to extreme events.

That’s why Grimm, a professor in ASU’s School of Life Sciences, is leading an international effort to develop new solutions for urban resilience — solutions that take advantage of the benefits that nature can provide. As part of a new, five-year, $2M dollar grant funded by the National Science Foundation, Grimm, along with co-principal investigator Timon McPhearson, director of the Urban Systems Lab at The New School in New York, will be crafting new ways to connect networks around the world that are working to create sustainable and resilient cities. “We are developing NATURA, which is an international network of networks. I will focus particularly on the international work in Europe, China, Australia and Africa,” McPhearson said. “NATURA, which stands for ‘Nature-based solutions for Urban Resilience in the Anthropocene,’ will link early-career scholars and practitioners who are working on solutions for climate change resilience around the world. We will create opportunities to share knowledge from one region or city with another.” Grimm will lead the North American node, while co-principal investigator Elizabeth Cook of Barnard College will lead the Latin American node.

According to McPhearson, one of the main challenges will be that these networks will have their own goals, challenges and missions. Initially, the team will bring the core networks together to brainstorm where interests and expertise can be aligned. Then, working groups will be created that will be tasked with digging more deeply into specific areas.

Grimm said much of NATURA’s framework will be focused on merging ecological, social and technological solutions to extreme climate issues. “This framework grew from our work in the Urban Resilience to Extremes Sustainability Research Network (UREx SRN),” Grimm said. UREx SRN, co-directed by Grimm and ASU sustainability Professor Charles Redman, is the founding network for NATURA.

“Often, nature-based solutions are thought of as being strictly ecological, but they are always going to have technological and social elements,” Grimm said. Additionally, solutions that might work in one part of the world or one part of the country, would not be appropriate for others. “We have different extreme event challenges. For example, here in Arizona, we would think about extreme heat and flooding. In New York, we think about sea-level rise compounded with coastal storms. And how we think about applying nature-based solutions in a massive slum that might have 20% of the population in a large city in Africa, for example, is totally different than adding green infrastructure in Portland, Oregon.”

McPhearson said one of the biggest challenges for implementing nature-based solutions is that climate change is ramping up quickly.

“If nations meet their targets under the Paris Agreement, we are still on track for a much warmer world — potentially 3 degrees Celsius or warmer,” he said. “That poses dramatic and even existential challenges for cities from rising temperatures, sea-level rise and coastal storms, and changing rainfall patterns that produce drought and extreme flooding. Nature-based solutions are not being implemented at the scale of the challenge we face currently, nor the coming future of climate-driven extreme events. It’s critical to advance our scientific understanding of just how effective nature-based solutions may or may not be.”

The NATURA project includes 26 networks across five global regions. The researchers will develop an online database to coordinate information exchange and build the data and informatics for cross-city comparisons. This will be a key tool for both individuals and groups of researchers to contribute to the project.

Top photo: Fire burns out of control in Australia. Photo by Getty Images

Q&A: Impeachment looms for Trump, but process is still in limbo

The United States Senate convened on Monday for the first time in 2020, but the impeachment process against President Donald Trump appears to be stuck in limbo for now.Even though the House of Representatives brought two articles of impeachment against the president in December before the holiday break, no amendment has been forthcoming from Senate Democrats.The delay has Senate Republicans scratc... Impeachment looms for Trump, but process is still in limbo

ASU historian Brooks D. Simpson says despite delay from the House, Senate Republicans risk appearing to have made up their minds already if they rush trial

The United States Senate convened on Monday for the first time in 2020, but the impeachment process against President Donald Trump appears to be stuck in limbo for now.

Even though the House of Representatives brought two articles of impeachment against the president in December before the holiday break, no amendment has been forthcoming from Senate Democrats.

The delay has Senate Republicans scratching their heads, wondering what’s next and how best to conduct a trial for the embattled commander in chief, who is the third president in history to be impeached.

Brooks D. Simpson, an Arizona State University Foundation Professor of history in the College of Integrative Sciences and Arts, is quite familiar with the process of impeachment. Simpson studies American political and military history as well as the American presidency, specializing in the era of the Civil War and Reconstruction.

ASU Now turned to Simpson to find out how he thinks this political standoff will play out. Question: Many news outlets reported and criticized the fact that once the articles of impeachment were voted on in the House, Speaker Nancy Pelosi chose to wait before sending them to the Senate. Has this happened before?

Answer: In each case when the House of Representatives has impeached a president, the process followed a different path. For example, in 1868 the House of Representatives voted to impeach Andrew Johnson before framing actual articles of impeachment. To assume that there has been a standard procedure is to do violence to the historical record. Speaker Pelosi’s decision to stay the transmittal of the articles of impeachment to the Senate also reflects a concern that the Senate has yet to determine how it will proceed. Remarks offered by several senators indicate that some people on both sides of the aisle have already made up their minds, which is not unusual, although the declarations offered by several Republican senators of consulting the White House as to how to proceed is novel.

Q: Before the holidays, it appeared that Pelosi would hold onto this indefinitely. When do you think this will be passed onto the Senate and how long would it take from there for a vote?

A: I suspect that Speaker Pelosi and Majority Leader (Mitch) McConnell are waiting for each other to blink. The speaker is unlikely to act until she receives clarification on how the Senate proposes to proceed, including provisions as to whether and how witnesses will testify. It remains to be seen whether several Republican senators, such as Mitt Romney, will break with their party and support Democrat-sponsored proposals for how the impeachment trial will proceed. Only when these questions are answered should we expect to see a trial, and its length depends on the rules of procedure adopted by the Senate.

Q: The Republicans, including McConnell, have let it be known that there won’t be much of a trial if they receive the articles of impeachment. Is this robbing the American people of a fair hearing, retribution for how the House conducted their hearing, or something else? What should we as citizens be concerned about?

A: Republicans run the risk of appearing to have adopted a preordained course with a predetermined outcome if they rush through the process in what appears to be unseemly haste. That will render Republicans vulnerable to the same sorts of criticisms they levelled against Democrats and confirm impressions that the impeachment process was highly partisan and reflects a polarized political environment. In an election year where both parties are scrambling for the support of undecided voters while maximizing the turnout among their respective political bases, both sides have an incentive to appear to rise above such tactics. Republicans may also leave the impression that they collaborated with the White House to obstruct the process, conceal evidence and prevent important testimony.

Q: What do you think of Sen. Lindsay Graham’s recent threat to start the trial without the articles of impeachment from the House? Can he legally do that or is this an empty threat?

A: Senator Graham lacks the authority to enact his threat.

Q: If the Senate ultimately chooses to vote this down, how will this play out in Donald Trump’s re-election bid in 2020, given he would be the only active impeached president ever to run for office?

A: President Trump and his supporters will treat acquittal as proclaiming his innocence and integrate that theme into a relentless attack on the Democratic party that will appeal to his base but find little traction elsewhere. Democrats will mine the testimony and evidence to paint a picture of a man unfitted by temperament and behavior for high office. Partisan appeals will simply reinforce both parties’ rhetoric: The general election will once again be closely contested.

Q: How will this action impact future presidencies in terms of impeachment? In the past, this was done in extreme cases. Now it seems like it can be used as a tool if a political party wants to remove a candidate from office.

A: I disagree with the premise that the impeachment process will become commonplace or accepted as a matter of routine political practice. The history of presidential impeachments demonstrates that only under extreme conditions that create concerns that transcend partisan divisions that it is a real threat. The Trump impeachment reinforces that sentiment: In truth, the only time the process removed a president from office was when Richard Nixon resigned in the face of what seemed to be inevitable conviction.

Q: How will historians view the impeachment of Donald J. Trump as an episode in American history and politics?

A: Accounts of the Trump presidency will focus on the continuing transformation of the environment in which Americans conduct national politics, including the growth of social media, the declining influence of traditional media outlets and a degeneration in how Americans debate politics. The result has been an intensification and reinvigoration of polarized partisan politics. Trump’s conduct as president challenges traditional expectations; an acquittal raises the question of whether the president’s behavior and actions, including his efforts to obstruct investigations concerning the executive branch, and his willingness to mix foreign policy with personal political concerns, will now be condoned, accepted and treated as normal political practice.