Matt Barrie, an ESPN SportsCenter anchor and studio host for the network’s college football coverage, will become the newest member of the Alumni Hall of Fame at Arizona State University’s Walter Cronkite School of Journalism and Mass Communication.

Barrie, who also hosts a podcast and calls college football games for ESPN, will be formally inducted during an upcoming 2020 ceremony at the Cronkite School in front of students, faculty, family and friends. Barrie is a 2001 graduate of the Cronkite School, where he earned his bachelor’s degree. 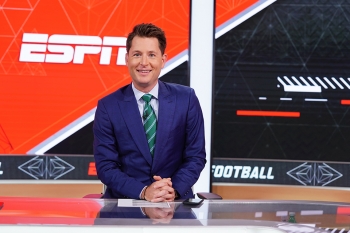 “Anyone who knows me knows I’m a loyal Sun Devil and proud Walter Cronkite graduate,” Barrie said. “And now, to be recognized for my career by the university that laid the foundation for it — I’m humbled and grateful.”

Barrie has been at ESPN’s anchor desk for “SportsCenter: AM” for a number of years, and he frequently hosts “SportsCenter on the Road” from different high-profile events around the country, such as the Masters Tournament and college campuses during football season. He also co-hosts an ESPN golf podcast with ESPN.com’s Michael Collins called “Matty and the Caddie.”

Over the course of his broadcast career, Barrie has earned 11 Emmy awards and three Edward R. Murrow journalism awards. Barrie got his start as a sports reporter at WJFW-TV in Wisconsin, before continuing on to WLTX-TV in South Carolina and KXAS-TV in Texas. He joined ESPN in 2013.

Barrie was invited to deliver the keynote speech at the Cronkite School’s convocation ceremony for its fall 2018 graduates. While addressing the students, Barrie mentioned the struggles he has overcome while encouraging the graduates to keep going even when faced with adversity.

“No matter the score, no matter how many things aren’t going your way, you stay in the game and you will win,” he said.

“We’re quite proud, at the Cronkite School, of Matt’s continued success over the years,” Callahan said. “Matt is a fantastic role model for our students, and his achievements in a highly-competitive field reflect his talent and illustrate his tenacity, drive and professionalism.”

No. 21 @SunDevilGym Heads To Collegiate Challenge This Weekend For First Meet

No. 21 Arizona State gymnastics will begin the 2020 season at the Collegiate Challenge Powered by Under Armour this Saturday in Anaheim, participating in the first session with No. 7 Denver, No. 13 Auburn and No. 25 Penn State. ...

No. 21 @SunDevilGym Heads To Collegiate Challenge This Weekend For First Meet No. 21 Arizona State gymnastics will begin the 2020 season at the Collegiate Challenge Powered by Under Armour this Saturday in Anaheim, participating in the first session with No. 7 Denver, No. 13 Auburn and No. 25 Penn State.